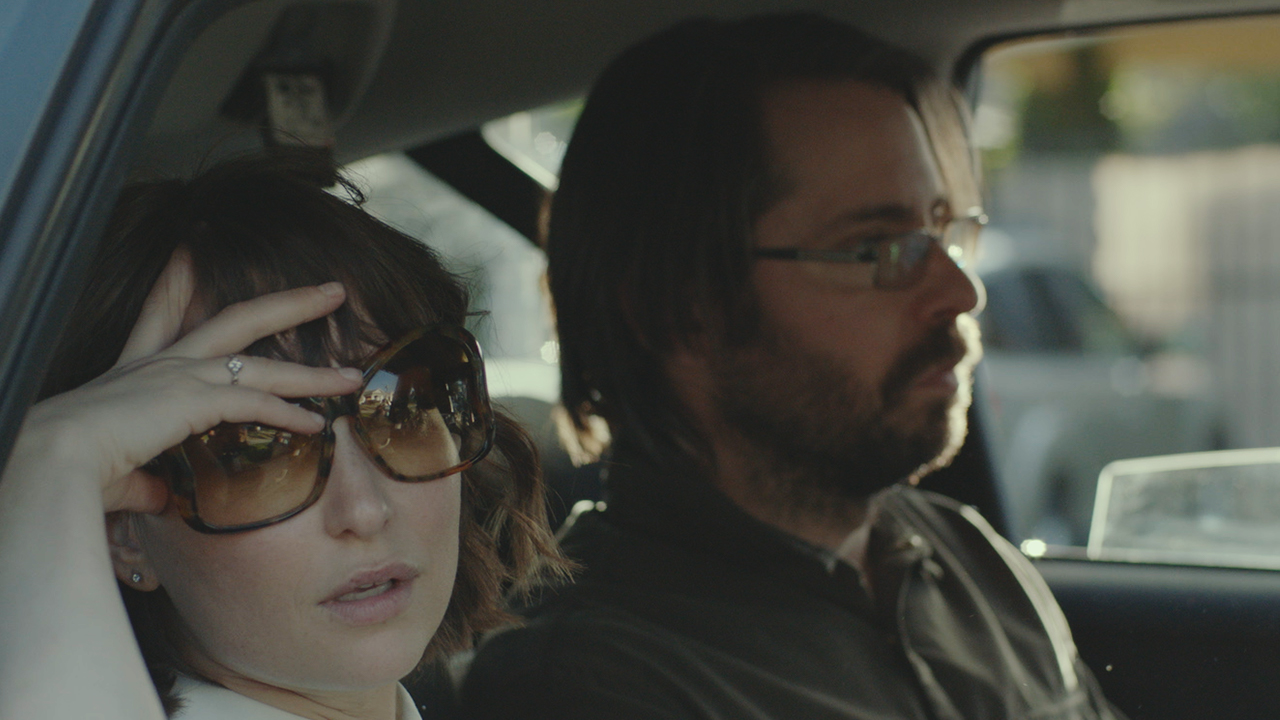 [dropcaps type=’normal’ font_size=’60’ color=’#ed145b’ background_color=” border_color=”]N[/dropcaps]ine years after winning ‘Best Music Video’ at SXSW with the (at the time) groundbreaking first person style music video for Cinnamon Chasers’ “Luv Deluxe” Director Saman Kesh once again judo flips the music video genre. With not only a literal take on the lyrics but the track itself leading the mystery of the narrative, Kesh, with help from black belt actors Martin Starr (Freaks and Geeks, Party Down) and Milana Vayntrub (This Is Us, AT&T’s Lily) oki goshi’s Hot Chip’s new music video ‘Hungry Child’ right into the mat.

But enough with the judo references, how does a director float a radical idea to a big band like Hot Chip? As Kesh explains to CLIPPED.TV it was a creative rollercoaster from the very beginning: “I was on a location scout and got a text message from John Moule (the commissioner) asking if I wanted to write something for Hot Chip. Being a nerdy fanboy since their first album, I was immediately like F*** yes. Didn’t even check my schedule, I was gonna make it work.” 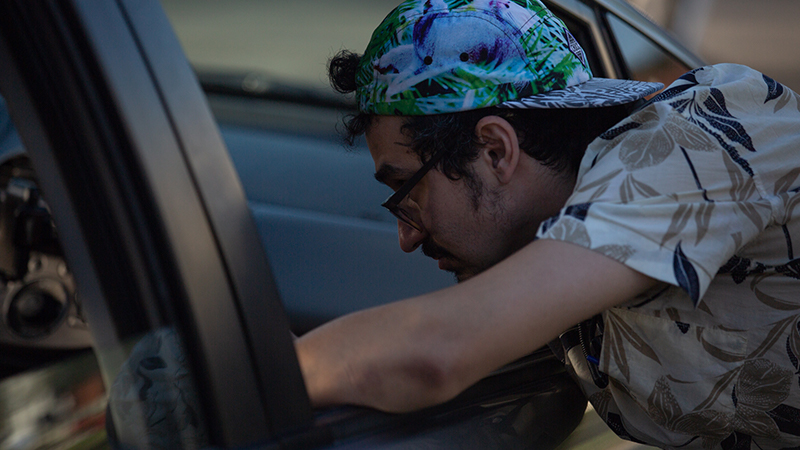 “I submitted an idea that was clever, and then didn’t hear back for a couple of weeks. I thought I lost the job. I was really sad. It felt like I went on a first date that I thought went well, but then nothing. Finally, John hit me back saying “Bad news, band didn’t like any of the ideas.” I was really bummed. But then he said “Good news: the band is a fan of your work and want to chat.” Cut to a few days later when Joe Goddard (vocals, synth & percussion in Hot Chip) and I got on a shaky line, I think he was in the wilderness or something. Lol. Anyhoo, he said: “We wonder if there is a relationship angle.” We talked about our favorite videos, what love meant to both of us, and then I was off to write a new idea.”

The music video interprets the themes of the ‘Hungry Child’ track by presenting a toxic and mundane relationship in a comedic way. Kesh discusses the decision process behind using an interpretation of the lyrics as the genesis of a concept: “I am in an editing session and POP, I get an idea. I bug Joe a bunch to see if he can get on a call. It was a crazy idea, and I felt nervous asking him because you know (the video has a bunch of talking over the track). Finally, Joe hits me back and I pitch him the idea. There was a long silence… then finally he said. “I think that might just be the right idea for this. I think I can get everyone on board.” Then he chuckles a little (ie, the validation I was looking for).”

“Basically, we set out to BREAK the music video genre by having the band’s song play as it LITERALLY follows around a toxic relationship. And it won’t leave them until they break up. It’s humorous but also talks about how a toxic relationship can spill into your everyday life and how the only way to get peace is to distance yourself from it.” 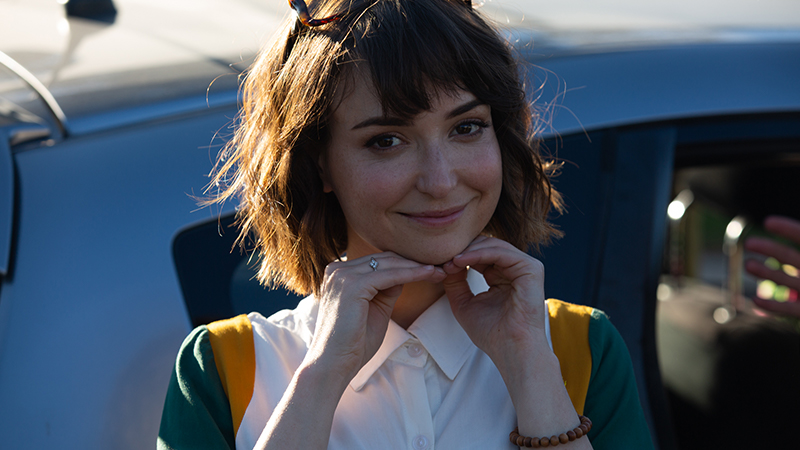 There’s powerful conflict between character and song with one at times engulfing the other. The story could have easily twisted into parody or Hot Chips epic track could have entirely overshadowed the plot but Kesh explains how he maintained harmony between lyric and narrative:

“The biggest challenge was finding the balance of dialogue vs song. It’s such an amazing track, I told Joe that I was very nervous to have dialogue over it, but he was very confident in my idea and so I trusted his trust for me. Our first edit didn’t have ANY subtitles, but you could hear ALL the dialogue. But after some preview screenings, we noticed that it was funnier with subtitles and having some dialogue turned down. This allowed for us to play off the idea that the song is ‘disrupting their lives,’ while also letting the viewers hear the song/lyrics a bit more.”

The cringe-worthy dialogue between the lead characters, including mentions of pickle dicks and jars of vinegar, is incredibly funny and at times all too real for the viewer. So was it all scripted or did the talent of the prize fighting actors bring their own experiences into their dialogue? 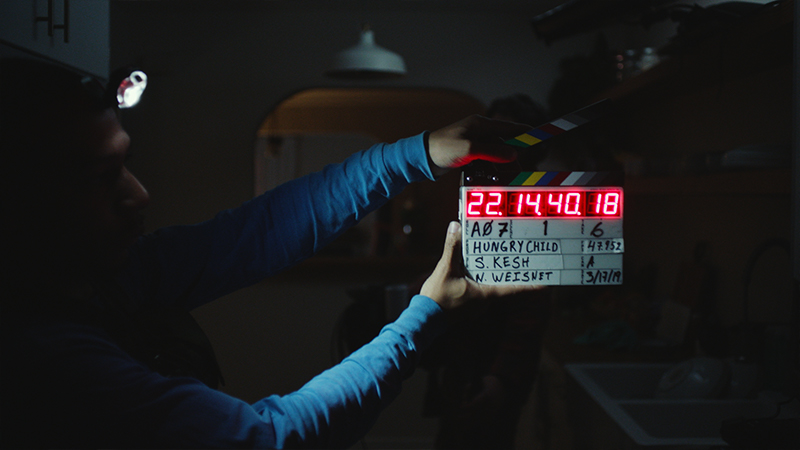 Kesh explains: “It was about 60/40, Scripted vs Improv. Early on, I told the actors the dialogue was not set in stone. I pretty much told them I felt that some stuff would be funny as is, and some things could be improved upon, and we would just play it by ear on set. Also, regardless of comedy, I am a fan of altering dialogue for my actors. Sometimes they come up with lines that are more natural or believable or more interesting. In this case, Martin and Milana would do every take a little different to explore the sandbox… But overall, they would always stay within the logic of the scene.”

Kesh also reveals how a great song attracts great talent: “Martin and I have known each other for a couple years now. We are two people who kind of shouldn’t be friends because I am kind of crazy to most people, and Martin is very calm and a man of few words, the kind of guy who says things in the fewest amount of words (unlike the dude writing this, lol). We were in the middle of working on a couple of other projects when I called him and asked if he wanted to be one of the leads in a video where the song torments the couple and they can’t stop it. Martin laughed, very subtle laugh, then asks to listen to the song (typical Martin, he is very professional and likes to have all the pieces before making a decision, which I admire). After he got off the call, he listened and texted me back a couple hours later with a thumbs up emoji… that was that.”

“I met Milana on this project, but I was familiar with her body of work and personality through friends/peers. I thought of Milana very early on, but dismissed the idea that we could get her or that she would be interested. After asking several people in town that we knew, we realized that people liked it, but people couldn’t make it work because it was such short notice. “ 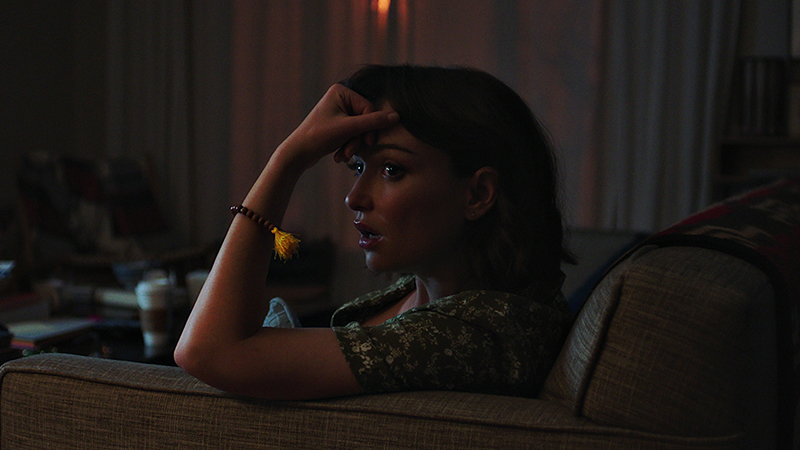 “Finally, TWO days before the shoot, I am pulling my hair out. My buddy Luke Stepleton heard me venting about it. Being a manager of talent, he asked me who we went out to, he saw Milana on my list and he was like, “Whaaaaa, I’ll hit her up right now.”… I kind of was nervous because I get nervous around talented people. She asked me “sounds kinda fun and am I available, but can I listen to the song?” I clearly knew that I passed her test, but now the song needed to let her know (like Martin). I sent her the song and that night she said: “see you tomorrow at rehearsals.” And that was that. Looking back, I had her on my list for a reason and I am glad the universe brought us back to her. And now she is a great friend and she expanded my mind. Love her!”

The ominous visual style of ‘Hungry Child’ plays beautifully in contrast against its comedic premise. The lighting, camera movement and composition emphasise the disconnect of the lead characters in an incredibly original way. Kesh describes how visual style developed into its own genre beast: “Very early on, Joe Goddard really liked the idea of doing a dual-tone project. A comedic genre, but shot like a horror or thriller. I made up some term like ‘Absurd Horror.’” 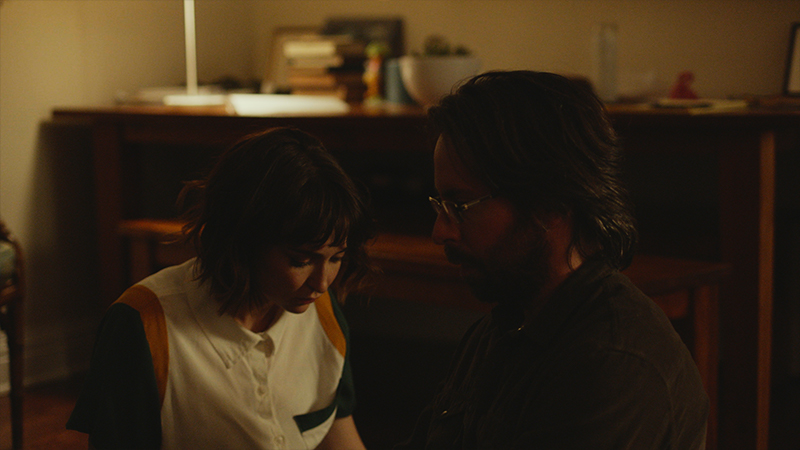 “Then, once I landed on the idea of a song tormenting a couple, the lighting needed to be unfriendly and moody. As for the camera, I wanted the camera to feel like the song, following them around in this creepy omniscient way. These two elements give a sense of menace that would just add to the absurdity of it all.”

“When I brought in our cinematographer, Nicholas Wiesnet, we both honed in and decided that the Steadicam would be the way to achieve the smooth movement. It was also the best choice since we had one ONE DAY to shoot 12 pages. Once in the location (which actually is the house of fellow director Dori Oskowitz) we noticed that it had all these framing devices like hallways, openings, and arches. They not only helped us focus on our subjects, but also let us separate them, creating a sense of being trapped.”

“Again, all these visual languages are normally used for very serious films, but in the context of our story, it just made it all the more absurd, which is what we were going for.”

Here is the official video for “Hungry Child”