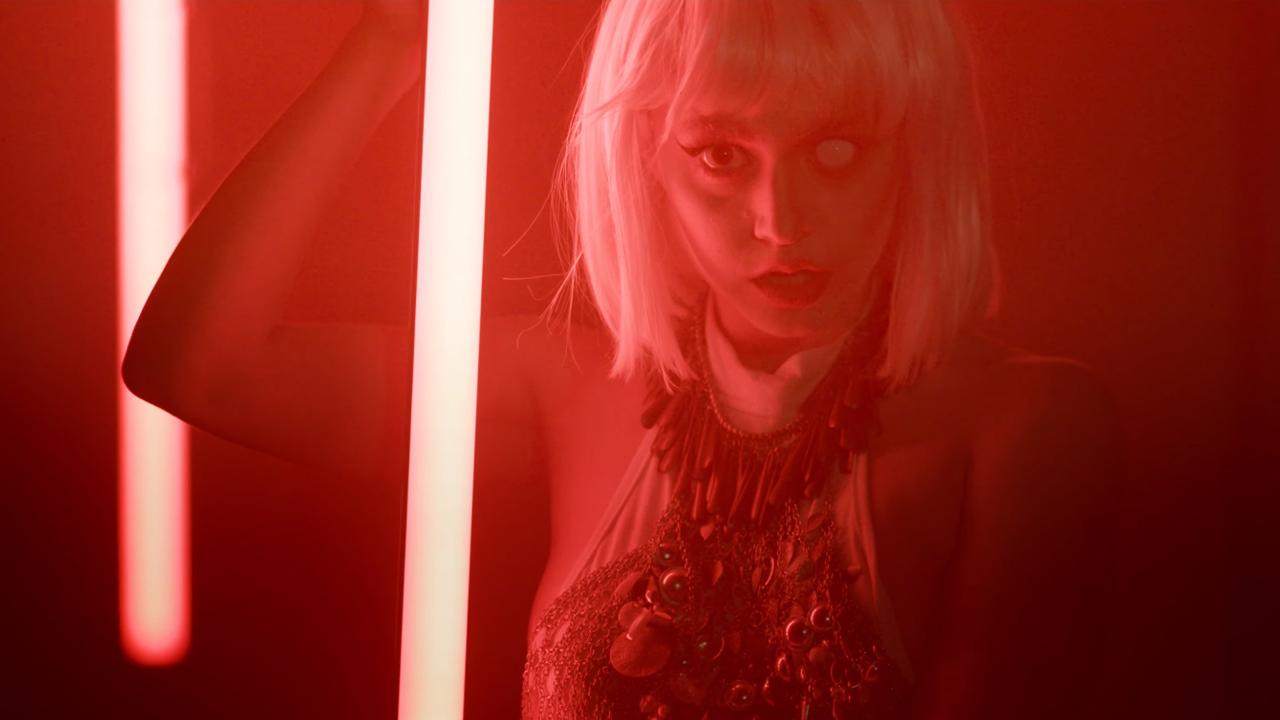 Style, character, individuality. These are all words that spring to mind when thinking about Brisbane born musician, artist and creative machine Sahara Beck. A long time darling of the indie crowd, Beck turned heads with her late 2018 single ‘Here We Go Again’ and the accompanying video that used bold colours and production design to showcase Sahara Beck as the stylistically on-point performer that she is. 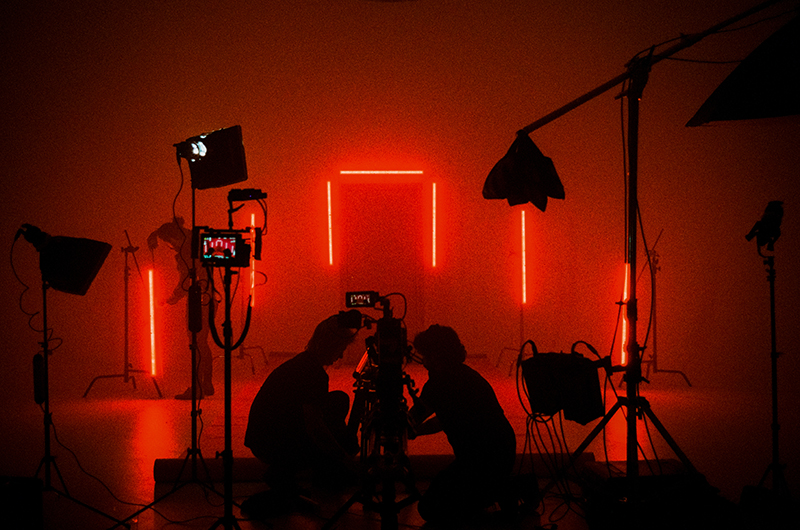 When director Natalie Sim was approached by Sahara Beck about the video for her latest single ‘Queen Of Hearts’ the reputation and consistency of Beck’s output was definitely present in Sim’s mind: “Sahara’s videos have a track record of being incredibly stylized and great, like her! So obviously I was absolutely stoked that they had asked if we were interested in creating her new clip. Holding up a rep didn’t really come into the picture, you always want to create the best thing you can. Our main goal was to make something as quirky and entertaining as Sahara. Also, we were just excited to be working together finally – the stars aligned.”

“Sahara and I have a lot in common (not just drinking beers together) and had such a blast working together. She completely trusted me, they came to us with the initial idea of a big food fight feast scene and we brainstormed from there. I went back to them a week later with a concept of a demented puppeteering QUEEN and two other characters that are all played by the queen Sahara herself. To be honest I was a little unsure if they would go for it… But the response: ‘OMG I F*ing love it!’” 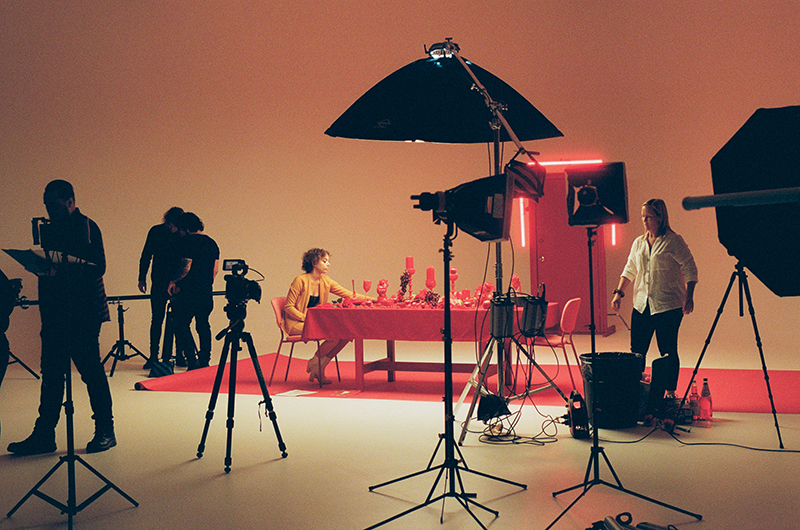 Sahara Beck embodies the three separate characters that populate the video expertly and with such energy. From the aforementioned demented puppet queen, to the two warring protagonists, Beck delivers each character as its own separate individual entity, with not only their own defined style but also recognisably original body language and mannerisms. On devising these characters, Sim says: “The concept for the three characters came about investigating the backstory of the feast scene, who was the other person? How did they get there? Why were they there? It has always intrigued me how the majority of us have these two sides – the drill sergeant, perfectionist, over-controlling, confident and on the other side this self-indulgent, lazy, relaxed filled with self-doubt. So basically, the three different characters in this clip all represent one person. S#1+ S#2 are the conflicting sides of our personality and the Queen is our ‘identity’, ‘ego’ or whatever you want to call it. Sabotage and power play a pretty big role with the characters both internally and externally.”

“When it came to Sahara getting into all three characters she nailed it, like max two takes, mostly got it in the first take. We spoke a lot about it in the week leading up to shooting and she practiced different mannerisms and what embodied each character or characteristic. The queen of hearts was the most fun- not sure if it was for Sahara considering she could only see out of one eye for about four hours. We wanted the Queen to come off like a possessed puppeteer. She killed it. Initially we wanted choreographers and dancers but due to our small budget we improvised. Which was me standing behind the camera doing very ungraceful thriller contortionist like movements (looked like I may have been having a seizure) while Sahara turned it into this sexy, creepy, weird performance.”

Sim and her crew use bold colours throughout the production to such great effect, not only to help differentiate between Beck’s three characters, but also to create a heightened reality in which these characters exist. The puppeteer inhabits this bright emblazoned red world, and when the other characters leave their slightly more muted pink, orange and gold surrounds for the feast, even every piece of food on the table is luscious bright red. They are well and truly in the world of the puppet master.

“We wanted to create something different to Sahara’s other clips, but also keeping her style with the block colours. We wanted it to feel surreal, I mean when I first heard the song it reminded me of something between Stranger Things and a 70s pop star performing at a pool party. So, we brainstormed and created mood boards, colour pallets and made a shit load of Pinterest boards. Rachael Dixon (Sahara’s manager) played a major role in the costume and set design (and everything else)… I was hoping she’d get sick of the music industry and work as a film producer. Haha” 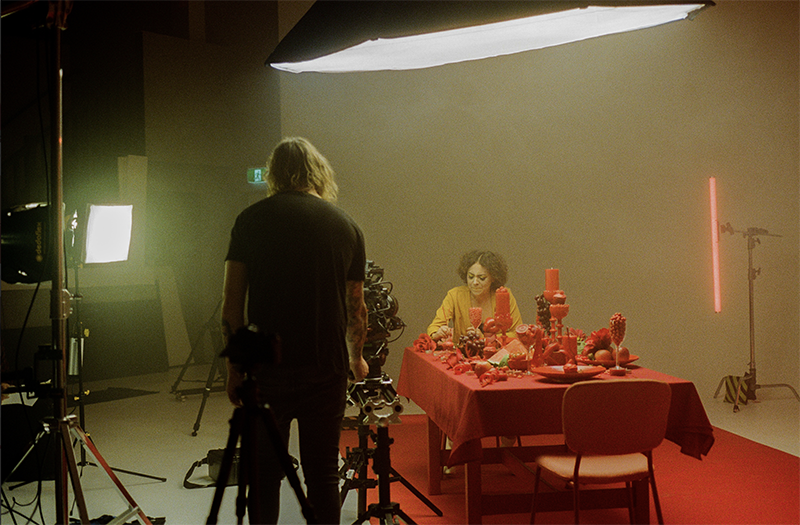 Sim and her DOP Alex Flamstead have taken such care in setting up these shots, especially when matched with the bold colour choices, it has the feeling that each of these shots could be taken from a magazine, in the vein of Tom Ford or similar. Particular mention needs to be made of the shots of Beck floating in the pool and driving in the car, there is a certain classic Hollywood energy captured within these frames which is undeniable.

Sim expands on the approach she and Alex Flamstead took in this department and some of the creative thinking they had to do to get the shots: “Alex and I actually run Method To My Madness Film Production together, so we have a good understanding of working together. He’s incredibly talented. The aim was to make it look extremely ‘pretty’ and measured. Getting some of those shots was a little fun – we didn’t have some of the gear we needed to traditionally get the shot so we improvised. The shot in the pool was actually just a lighting stand with a large extendable arm over the pool with the 14mm on the c200, we did the same with the shot above the car. Everything else was shot on the Ronin, tripod or slider. Apart from the reverse shot you see of the yellow Sahara about to pour the cocktail – we actually put our intern Tom in the pool on a floaty toy with the full rig set up.”

Sahara Beck as a performer is a true individual. As Natalie Sim mentioned, her music is an eclectic blend of genres that becomes purely her own, and when matched with that stylistic acuteness, everything she does is so wonderfully infectious. Natalie Sim had a seemingly massive task ahead of her to create a video that would do Beck justice, something that was not only entertaining but also artistically executed and wholly original. A task which she and her crew have dispatched most comprehensively.

Here is the official video for ‘Queen Of Hearts‘