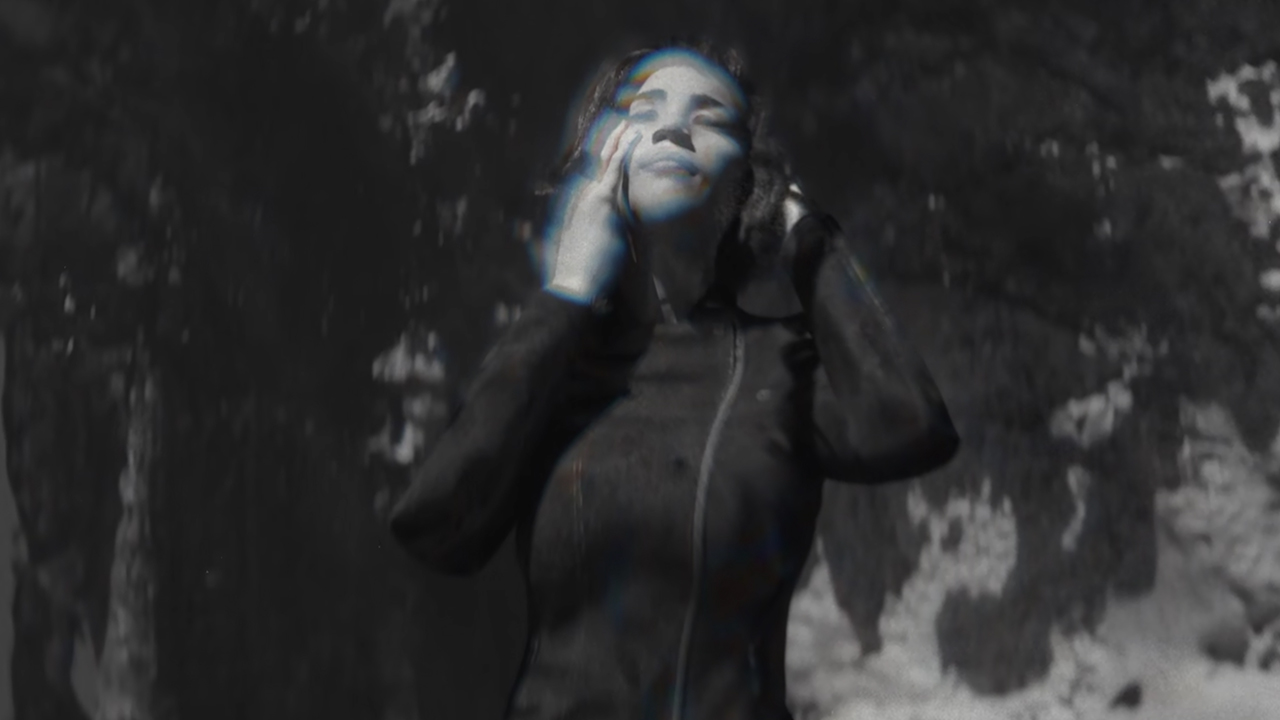 by Dane Armour
0 comments
Balázs Simon and Dávid Dell’Edera direct the ‘AAID’ music video for Leifur James and the Vimeo description perfectly leads you into a surreal yet grounded CGI blur of captured moments in time; “Wandering through a chain of memories a man is trying to make sense of a past relationship.” The visuals beautifully support this theme that’s laced throughout James’s album where time and space are somewhat subjective as we traverse through a world built from fractured 3D scans that constantly shift and distort just as our own memories do. 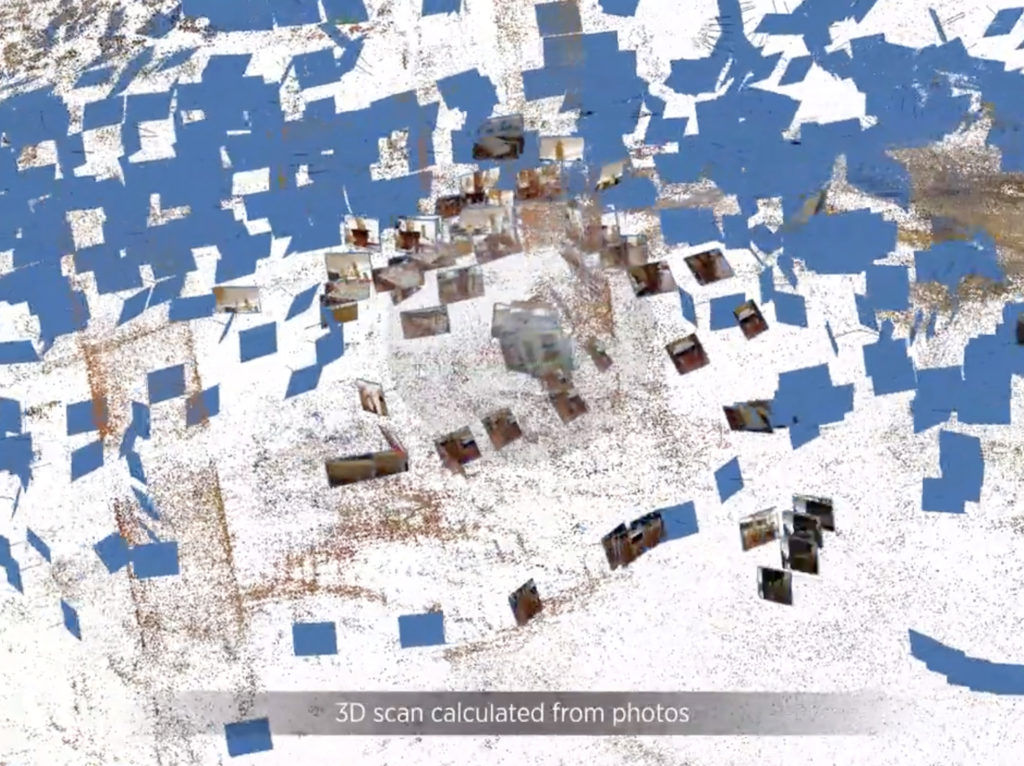 After the first viewing, it leaves a blurry, hazed impression where it’s hard to recall exactly what you’ve just watched. Balázs and Dávid share their technical and creative approach to eliciting this sensation.

Balázs: “A big part of that is coming from the memory idea. We decided to go with shots that resemble POVs. What’s exciting about that is our vision is not designed to be “edited”, it’s a constant flow. In a way every edit becomes a jump cut, even if not in the compositional sense. It’s like every time you blink you jump time back and forth, which makes it erratic.”

Dávid: “We imagined a journey of the subjective from the get-go. The pulsing rhythm has a broken quality in the track. Like when you’re conflicted between remembering and forgetting. Does that make sense? Looking back I was inspired mostly by amateur photos. Everyday moments, snaps from a party, anything that made a lasting impression on me, be that some movement or the eyes of a girl. I’m sure a lot of it came from the scanned environments though. Those are parts of our own living and working environments, but as I explored those spaces over and over, new views about them started forming in me, and that gave shape for the film.” 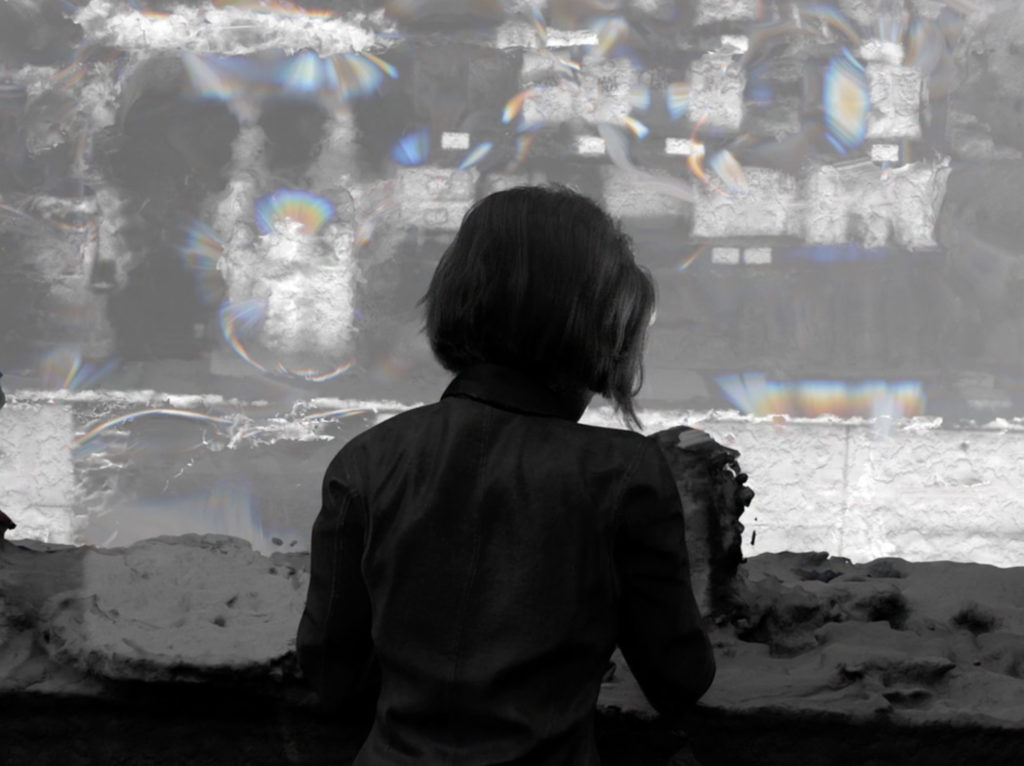 The film revolves around a central subject, the woman who these memories are all about. There is a real intimacy to the moments we see her frozen in, which the directors created from the aforementioned references as well as a combination of personal experiences and memories from both the artist, Leifur James, and the directors themselves.

Balázs: “The album revolves around all kinds of alienation and loss. James shared such a personal story with us, so the base idea is fueled by that, but what happens or how it unfolds was up to us. The characters don’t represent any real people. The environments are very real though, the film is almost like an alternate reality.”

Dávid: “I have a big connection to these spaces, loads of personal memories. During the film we created entirely new ones, which is exciting, because these moments – though never happened – are also a part of these places now!” 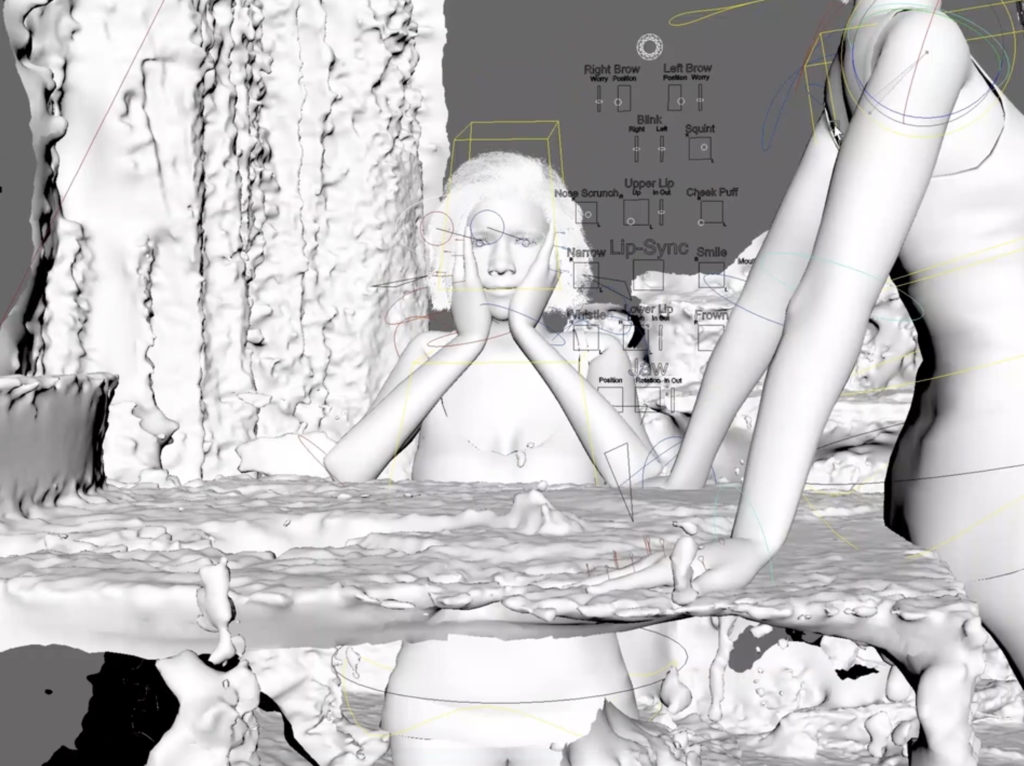 In a film filled with frozen moments so much must be communicated through the camera, in a way, it becomes a character itself and within the context of these memories, it represents the POV of the man who is recalling his past relationship. The camera work in ‘AAID’ lends a grounded texture to the whole piece, a style that took a lot of experimentation to find.

Balázs: “Camera is character! Sure, this film is POV inspired, but this is true in every kind of film. Once we settled on the story, Dávid wrote a list of how it should unfold together with the music. And we started to look for ways to express those points with camera. A big part of that was blind experimentation, dropping in lights and cameras, and looking for interesting things. This worked well as the process was unpredictable for us too, and we could keep that sense of curiosity for the camera.”

Dávid: “The process was so random that the ending of the film originated as a joke! Every time we found something that seemed to be working, we recorded a preview and dropped it on a timeline with the other clips. So it’s not pre-planned, but grown organically!” 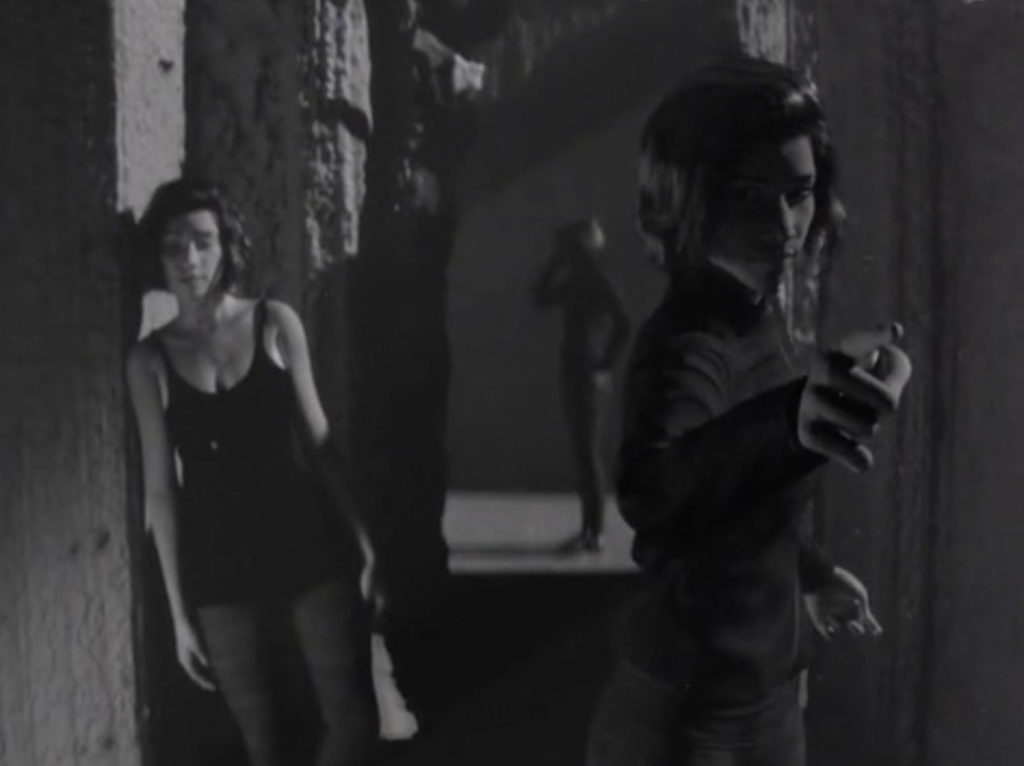 The directors have released a breakdown video which you can find here, in which they reveal some of the technical intricacies that went into refining the look. An art-directed bokeh pattern, slight chromatic splitting that lends color to the otherwise monochromatic clip and 3D photogrammetry to create realistic duplicates of their homes. In such a technically driven clip that also holds an emotional theme at its core, the directors had this to say on whether technical or conceptual constraints drive their projects and when to call a project done.

Balázs: “This is a tricky question! If we assume we have all the money – and especially time – at disposal, the concept comes first. In reality, we have to take a lot of factors into account. When you have to do something in a short time or on budget, it’s beneficial to work around those limitations. I think it’s best to keep a good balance between concept and approach as they both influence each other.”

Dávid: “In this film we knew our limits very well. Based on that we came up with the concept, and that brought all the solutions along. It’s important to come up with something feasible. Frozen moments or 3D scanning was a solution as we didn’t have time to animate the characters.” 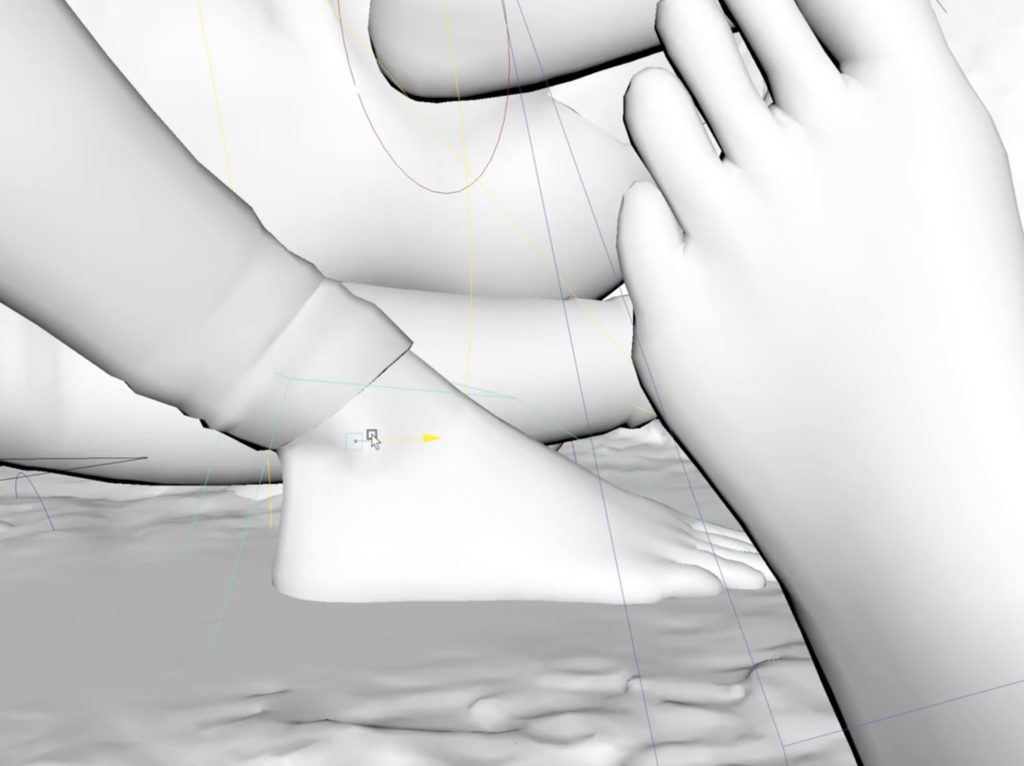 Balázs: “We knew we wanted to use memories, so we had to work out how to present those in an interesting way. We needed some kind of environment, but an abstract one so it’s closer to the memory idea. That led us to photogrammetry. Most decisions were made like that. It’s all based on the concept. We look for approaches that help us express what we want. We start with a picture in mind, and a bunch of available technology. And then search for connections.”

Dávid: “The scanned environments greatly define the visual world of the film. Once we settled on technique, we came up with ideas to complement that look. This process is exhilarating! We throw in ideas, and take some time to try them out. It’s hard to predict the outcome – there are times when I come up with something, and then a message arrives from Balázs in the middle of the night, containing images or technical stuff that is even more exciting than my first thought was.”

Balázs: “Nothing is ever enough, but once in a while you have to draw the line right? I guess there’s a tipping point where you sense you could do better, but without expressing more – that helps you to stop. The big task is to know what to leave out, and then we run with the rest. If everything goes right, you won’t have to save the movie during compositing!”

Here is the official video for ‘AAID‘