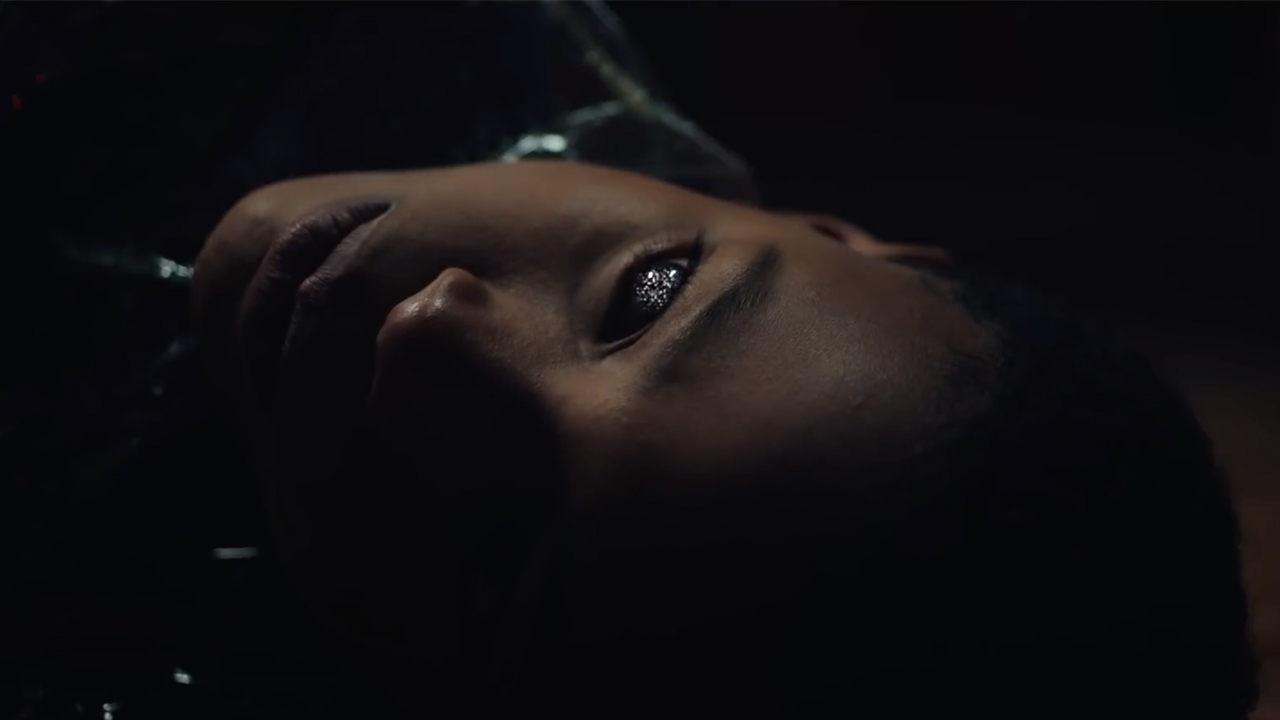 [dropcaps type=’normal’ font_size=’60’ color=’#ed145b’ background_color=” border_color=”]A[/dropcaps]s two restauranteurs (played by Beachwood members Angeline Armstrong and Jarrad Rogers) sit down to relax after closing up shop, they are startled by the arrival of a prophetic boy who has emerged from the TV. While at first the boy is fascinated by the real world and dances joyously around the shop, suddenly he becomes entranced, acting out the violent images that are concurrently occurring on the television. An accomplished filmmaker and writer outside of music, Angeline Armstrong not only starred in but also directed this video for Beachwood’s debut single “Miracle”. When asked about how the concept for the video came to be, Armstrong replies: “The concept was actually born of a comment my friend’s mum made. (Funnily enough that friend, Juliet (Bennie), happens to be the Production Designer on this music video!)” “Her mum was watching her scroll through a million different things on her phone – from tragic newsflashes and political Facebook rants, to stupid cat memes and like, those annoying ads for charcoal toothpaste or something, then onto a heartbreaking petition for children in detention… and made the comment of ‘how can you possibly even process all that?’”

“And the reality is that we can’t. We scroll through such an insurmountable flood of content and information that we’ve sort of learnt to become apathetic to it all. The dramatic question of the video became ‘what if our screen devices felt the weight of the emotion from all the things that pass across our screen? What if our screen device had feelings?’ And so that led to this idea that maybe the TV screen’s ‘soul’ could be depicted as this young kid manifestation, who just gets thrown around from emotion to emotion as the content on the screen influences his mood and behaviour.” As the concerned restaurant staff attempt to calm the poor overwhelmed boy, they suddenly find themselves in his control. Taking them into a trance-like state, the boy shows them that they have become the influenced. When the boy drops to the floor, overcome by the experience, Armstrong & Rogers’ characters come to his aid. It is then that they see themselves and the child on the flickering TV screen.

When asked about the implications of this conclusion, Armstrong replies: “The aim was to leave a bit of mystery and interpretation there – there are specific things that it means to me personally but the most important thing for me was to pose the questions, not necessarily answer them all. There’s definitely an intentional power struggle between the kid, the TV itself and the waitstaff. And those power shifts are all about ‘control’ – Are we in control of technology? Are we really in control of ‘content’, even? Or is content controlling us? Are we a slave to it in many ways?” 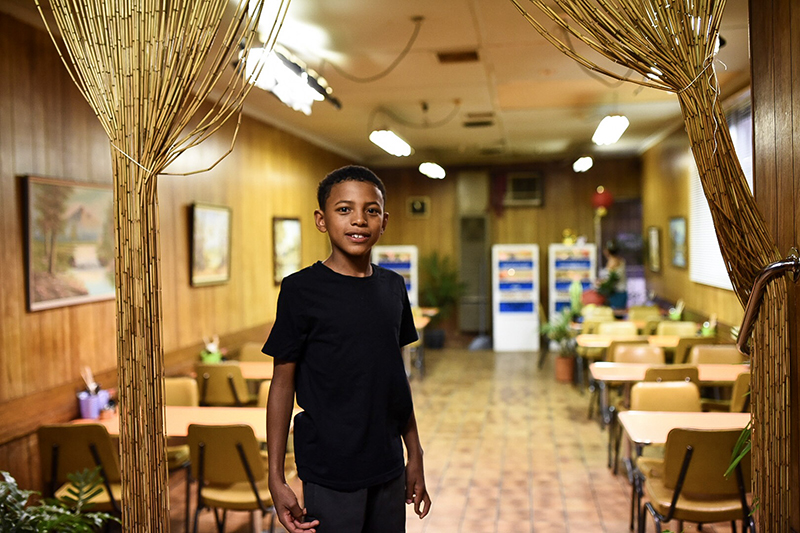 Tackling such a prominent and current issue as the media’s role in society could in many hands lead to something trite or ham-fisted. Instead Armstrong’s choice to use this child as a conduit for the message shows a welcome creativity and effectively portrays the potential snowballing of dangers that the information age has the potential of producing.

There is an inherent musical dynamic shift between the verses and choruses of the song and Armstrong chooses to utilise this conceptually, using some very interesting techniques to highlight the changes in production. The understated mustard and brown restaurant suddenly becomes this intense dark purple dreamscape like environment. 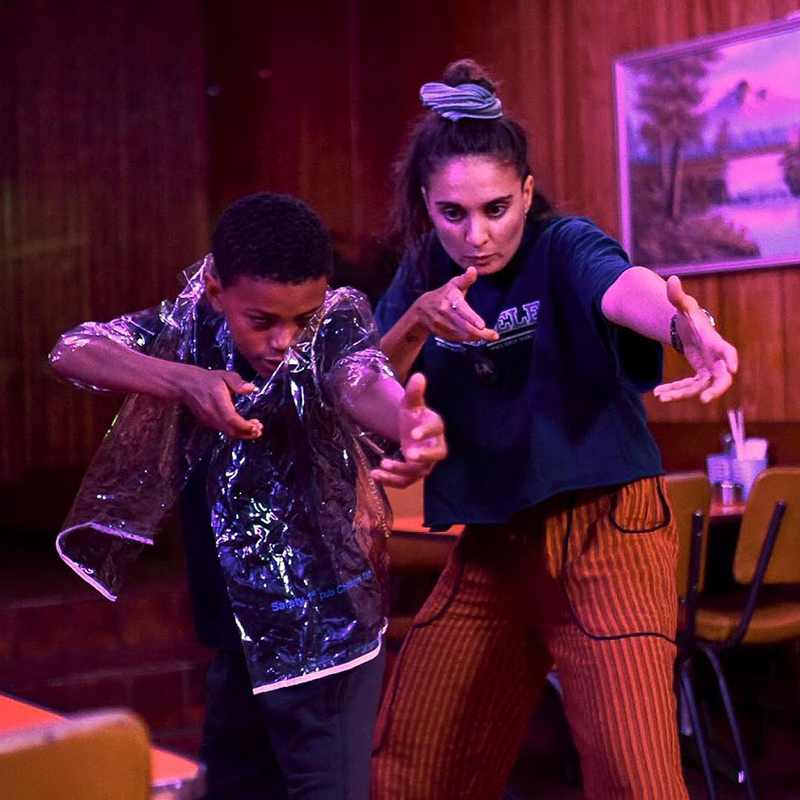 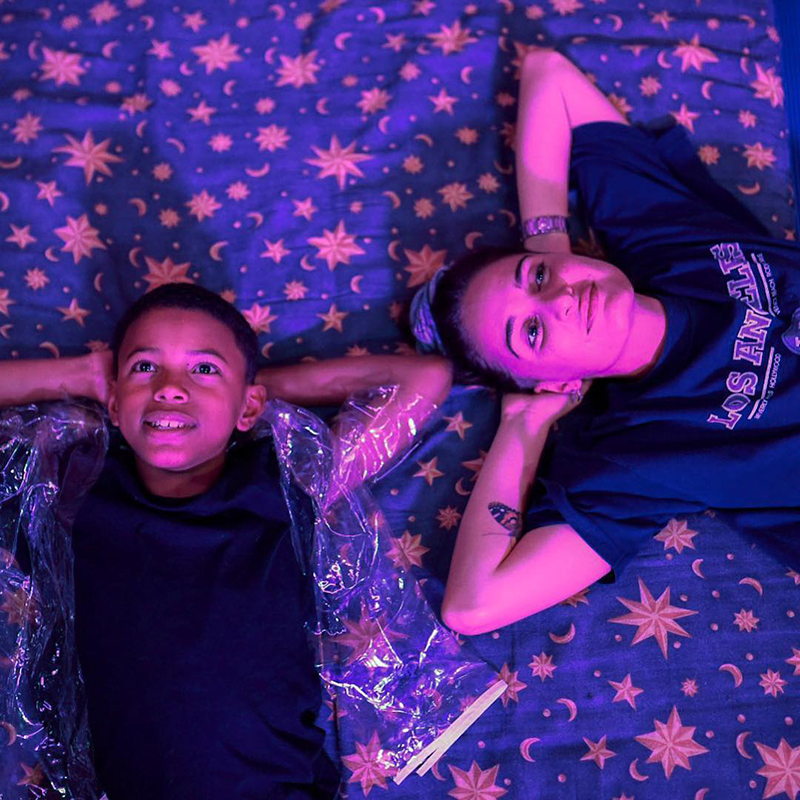 Armstrong discusses these aesthetic changes: “I really wanted to displace the characters, without physically taking them out of the ‘real world’ environment of that Chinese-Australiana diner. I definitely notice a pattern of this in my previous work – I seem to have a bit of an obsession with taking familiar urban environments and banal domestic spaces (i.e. grocery store isles, bathrooms) and making them ‘the stage’. Stylized, dramatized, creating unease in the surreal.”

“I’m fascinated with the idea of portraying interior character worlds through performative spaces – blurring the lines between real-life and performance, reality and the stage. The intention was to have these very ‘real world’, nuanced character moments and interactions in the verses, then just spiral into very staged and stylized sequences whenever the “TV” was ‘taking control’ in the more upbeat moments of the song.” 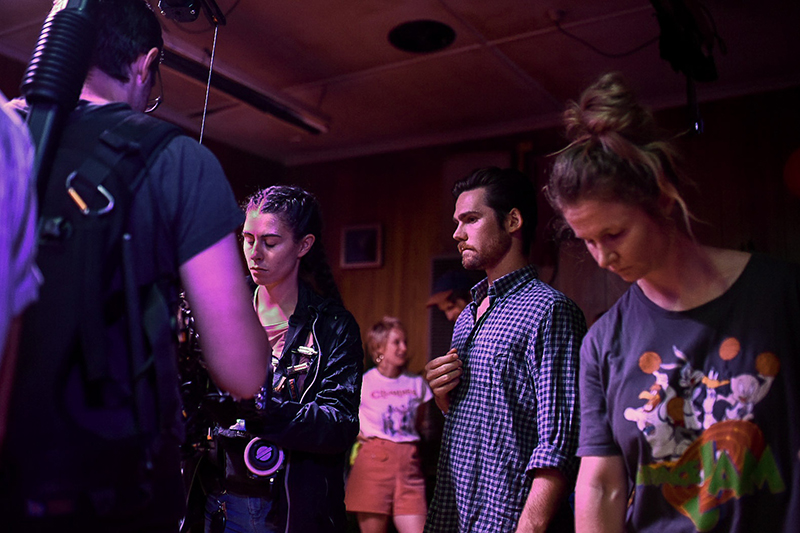 This dynamic approach is also heightened by the edit. The use of jump repeat cuts influenced by the upbeat pre-chorus is particularly interesting. Armstrong speaks glowingly of collaborating with editor Emily Robb on this project: “Yeah, how sick were those repeat cuts?! I can’t take any of the credit there! That was all Em. She’s full of great ideas and it had been a technique she experimented with – given the ‘glitch-y’/digital world nature of the concept and theme, it just tied in so well.”

Armstrong continues: “Emily is seriously a dream to work with – I trust her so much and so often we are on the same page creatively. It’s something that’s rare, and I feel super lucky to have that creative relationship and trust that’s been built over multiple projects with someone who just shares the same aesthetic taste as well.” 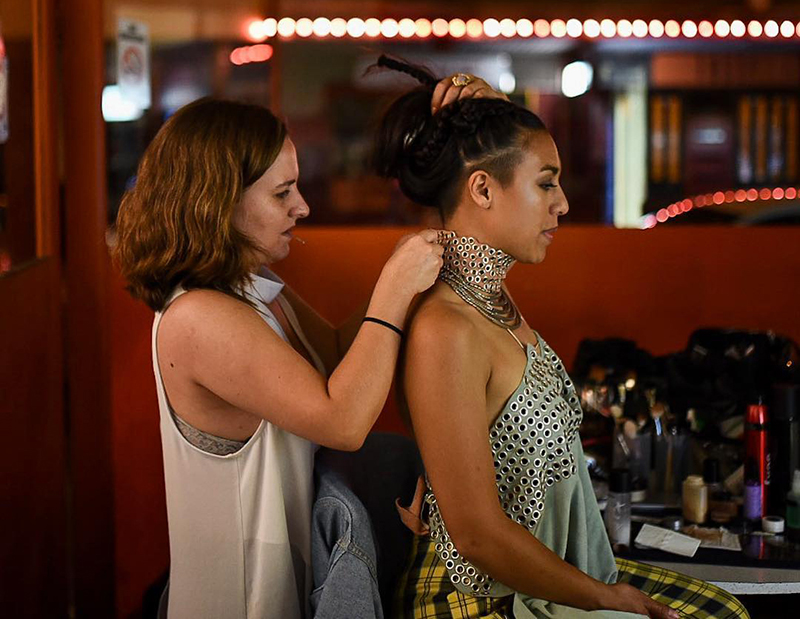 Speaking of rare, it’s impossible to not mention the talent of Kaydan Price, who portrays the young manifestation of the TV in this video. Price is not only a gifted dancer, but also an incredibly expressive and engaging actor. These were sentiments echoed emphatically by Armstrong: “Oh! Don’t even get me started on Kayden! What an absolute star. He’s a very talented young actor – it was obvious even from his first audition tape that he had that special spark. My good friend Natasha Kay Newling (who is a dancer, acting/movement coach and a musician herself) worked closely with Kayden in pre-production with a few movement workshops and coaching sessions. Together they really took Kayden’s raw talent to the next level for the clip. Mesmerizing to watch, really.”

Armstrong speaks so highly of all of her collaborators on this project. We asked Armstrong about co-directing with Hayden Mustica and why he was the right person for this project, to which she replies: “I’m usually a solo director, but I love collaborating. It kind of becomes necessary on my own music videos when I’m on-camera to have someone behind camera directing me and helping call the shots. I find that when I don’t have that, either the direction or the performance is severely compromised.” 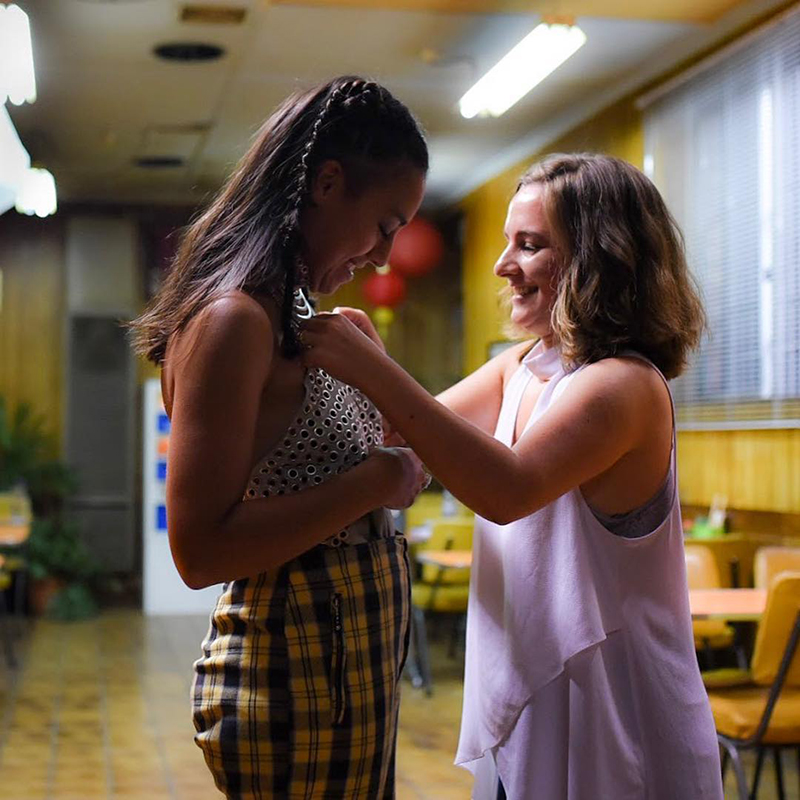 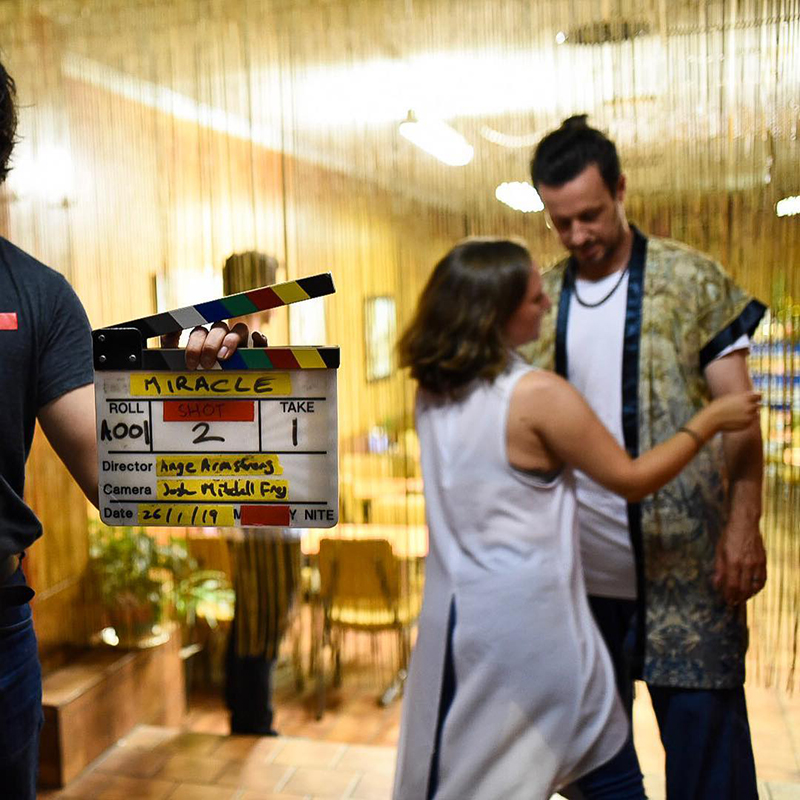 “Hayden is a really wonderful actor-focussed director (and a good friend!), we share a lot of the same movie and music taste, so it made perfect sense, he just really got the tone and intention of the vid. I’ve worked with him before as an actor and have always felt so comfortable and at ease with his direction and the kind of calm and sure energy he brings to set, so it was a pretty easy choice.”

“I think some directors get unnecessarily precious/controlling when it comes to collaboration – probably that film school obsession with auteurism. I never felt compromised or undermined in my creative vision, and in fact, I’ve always found that trusting other people in that creative process ends up bringing out the best in your own ideas too. If you can communicate your vision well, then you end up with that amazing feeling where all these lovely people have come together and somehow taken the mirage in your mind and made it this tangible and solid reality through the eye of the lens.” 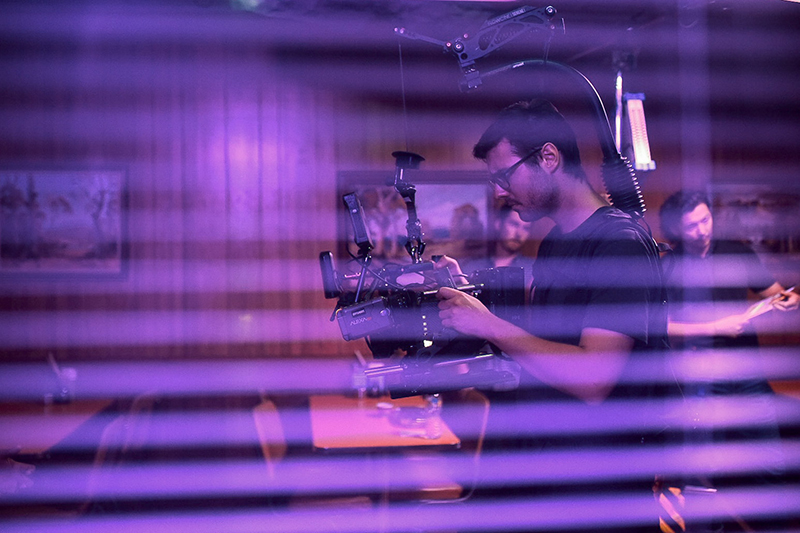 Speaking of the lens, Josh Mitchell-Frey (Director of Photography) shared some insight to his approach of the cinematography: “We really wanted to create a slightly alternate world – still naturalistic, but with its own set of rules. We paired an Arri Alexa Mini with a set of Cooke Speed Panchro lenses. To me, the image the Alexa produces has an unquantifiably beautiful quality to it, and combining this with the unique character of vintage Cooke lenses worked perfectly to achieve this subtle, otherworldly aesthetic we were looking for. Technically, the shoot posed a number of challenges – the location was a very tight, narrow space and there were a large number of shots to get through. Because our camera setup was so compact, I was able to squeeze into tight spaces and compose shots quickly. Using an Easyrig and Serene arm, I could float with the camera, following the movements of our actors in an organic, improvisational way. I feel this really adds to the kinetic, building energy of the choreography in this clip.”

Whilst camera operation is so powerful in this clip, the value of having such a skilled filmmaker in the band for Beachwood can’t be understated, though it does at the very least double the workload for Armstrong. While that fact wasn’t lost on her, Armstrong showed nothing but enthusiasm for continuing to be behind the camera for future Beachwood projects. 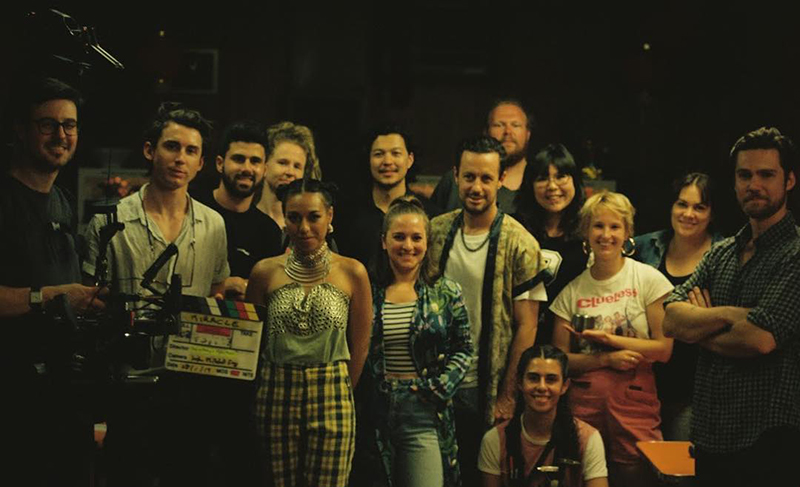 Armstrong elaborates: “Of course! I mean, don’t get me wrong, you can’t even begin to imagine the amount of back-end work that goes into something like this… I’d be lying if I said I loved every second of it and that it wasn’t just plain painful at times. But being able to create the visuals for songs that I’ve written with Jarrad, is such a rewarding and fulfilling experience.”

“There’s such a unique synergy when the same person can be there from the birth of the song, and then see it through to its visual manifestation as well. And nothing beats that feeling when you’re on-set, and everything is running like clock-work, and everyone is just playing their part to create this beautiful, moving canvas of artwork. It gives me the same buzz as playing live shows! It’s so wondrously in-the-moment.”

Here is the official video for “Miracle”