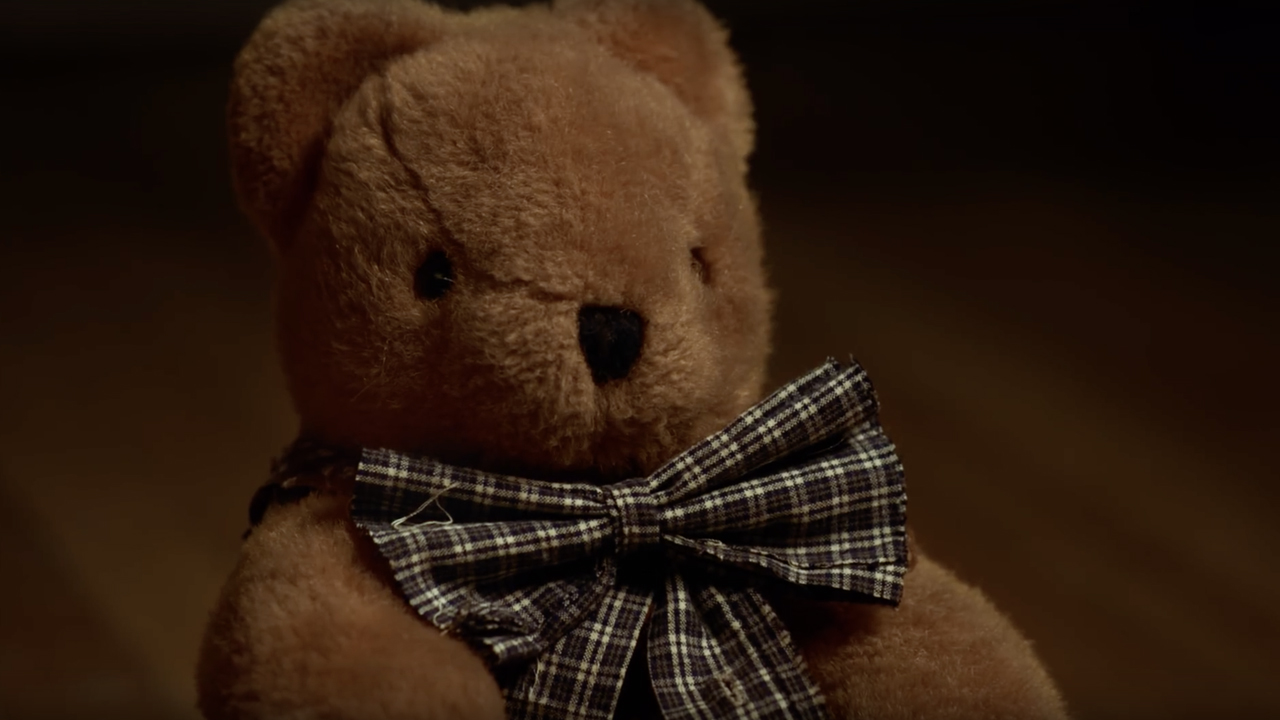 [dropcaps type=’normal’ font_size=’60’ color=’#ed145b’ background_color=” border_color=”]A[/dropcaps]fter a loss a person can experience grief in so many complex and surprising ways. In “Birthday”, Gia Margaret discusses the way everyday occurrences can act as reminders of our loss and the different ways that can make you feel.

The video for “Birthday”, directed by Matt Gehl, takes a fantastical approach to this process, personifying the memories that can be held in inanimate objects as wistful yet playful characters who accompany Margaret through her day. 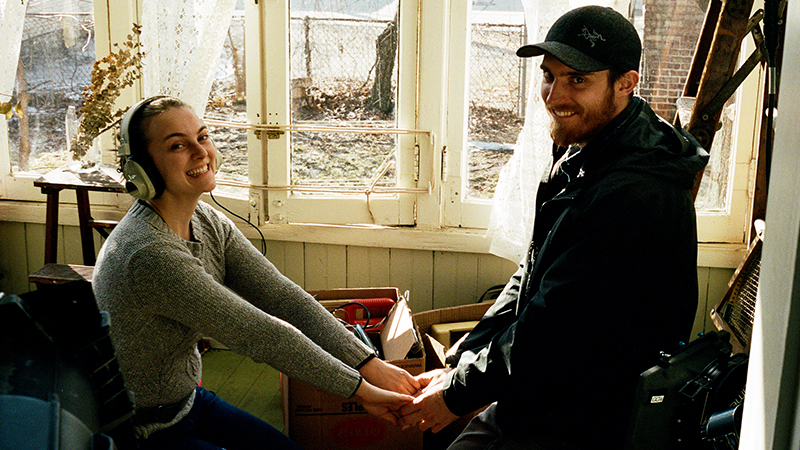 Gehl tells of how the concept came about through a marrying of the sentiment of Gia Margaret’s lyrics and a pleasant experience she had in a dream: “Gia had a dream, not a nightmare, shortly after writing ‘Birthday’ where she said several creatures followed her around for a day, and we felt that was a great starting point for the song’s video.”

“We never wanted the video to feel too sad or take itself too seriously. Although pretty heavy on paper, I think there’s a warm optimism to the track that shines through the grieving lyrics. She touches on the strange feeling you get when memories of something lost are stirred up through rituals, events, or objects encountered in your everyday life. Each creature came from an object with a past, and we thought Gia interacting with each one of these in a dream like state would be an interesting narrative to represent how one deals with memories.” 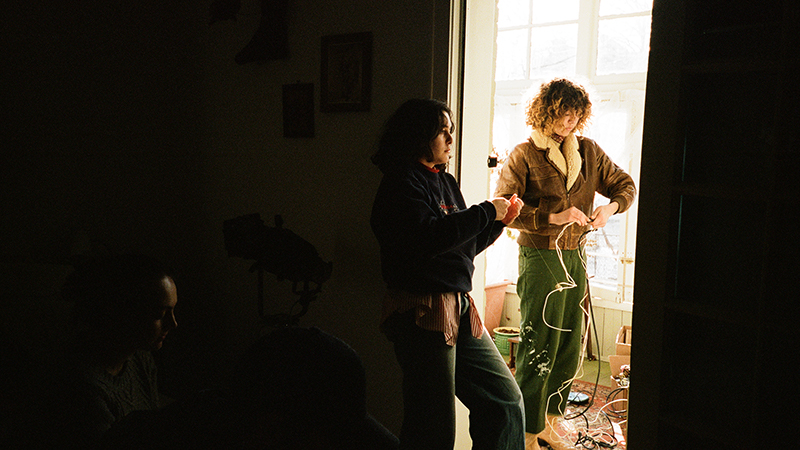 Margaret finds these memories in the residual smell of a blanket, the love in a mix CD and the sentimentality of a teddy bear. As she encounters these objects they animate and become friends to her, allowing her to enjoy these memories again. As they all sit together to celebrate a birthday, Gia blows out the candles and her new friends disappear.

When asked whether this ending signified the end of the fantasy and perhaps some sort of closure for Margaret’s character, Gehl replies rather cryptically: “I don’t want to speak too much on the end because I want people to come up with their own interpretation of the ‘closure,’ but I will say we made a choice between two endings.  One ending where Gia blows out the candles and the cake is gone along with the creatures, and this one we went with where the candles are blown out, the creatures are gone but the cake remains.  Her new friends – made of memories, delivering something symbolically good felt right for the deep-rooted optimism in the track.” 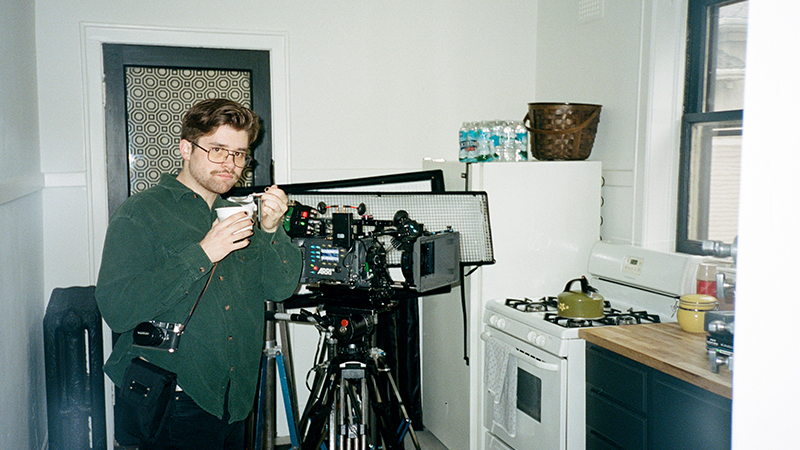 And Gehl makes a great point here, while “Birthday” is ultimately a song full of lament and melancholy, there is something so comforting in Margaret’s delivery that wonderfully echoes the grieving process. That familiarity that somehow simultaneously leaves you feeling deeply hollow but also completely filled up with love.

Gehl is able to express this clash of optimism and listlessness in the way the video is predominantly delivered in slow motion. Gehl explains: “I always thought the melancholy tempo of the song would work well in slow motion, but we wanted to motivate viewers into a slow-moving ethereal world.  We did this by shooting a brief intro of Gia falling asleep in regular speed, then jumped into high speed when she ‘wakes up’ in the dream world as the blanket comes to life, establishing the new world of creatures and memories.” 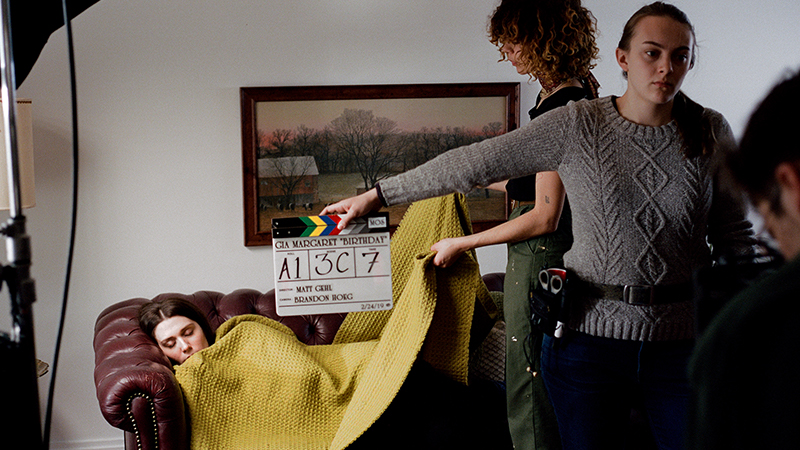 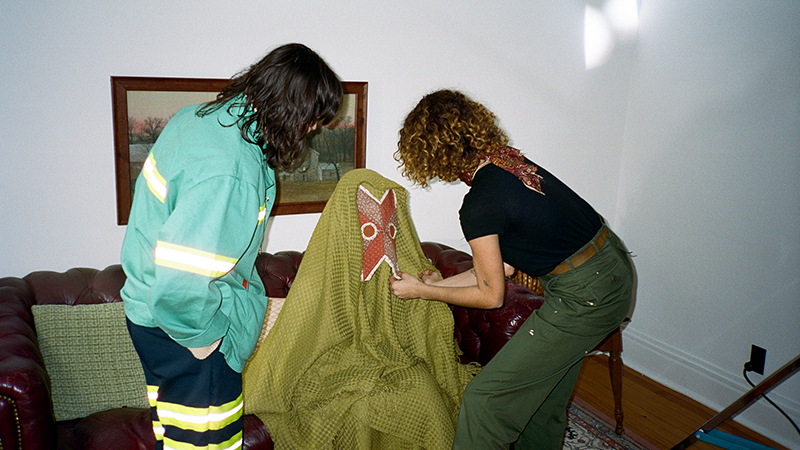 This effect is also enhanced by the way that, even though we are inhabiting a dream world with surreal creatures, it all takes place in the very real setting of Margaret’s house. Grounding the video in reality and further intensifying the relatability of this all too familiar experience that Margaret is going through.

Gehl talks about the importance of this approach: “Grounding everything in reality while staying dreamy was incredibly important to us because that feeling matched the tone of the song and the original idea the story came from. We created this mix of fantasy grounded in reality by combining elements from our two biggest references for the video; David Lowery’s ‘Ghost Story,’ and Hayao Miyazaki’s ‘Spirited Away.’  We wanted the world to appear natural with mystical elements like ‘Ghost Story,’ but wanted the creatures to feel cute and operate in a curious manner like in ‘Spirited Away.’ We felt this combination of serious and curious would match the sad optimism of the song and leave people with the right bittersweet emotions throughout.”

The ‘Spirited Away’ reference point is felt heavily in Margaret’s character’s companions. Their big empty yet friendly faces and this inherent curiosity about the way they express themselves makes these ultimately emotionless characters actually feel so engaging. 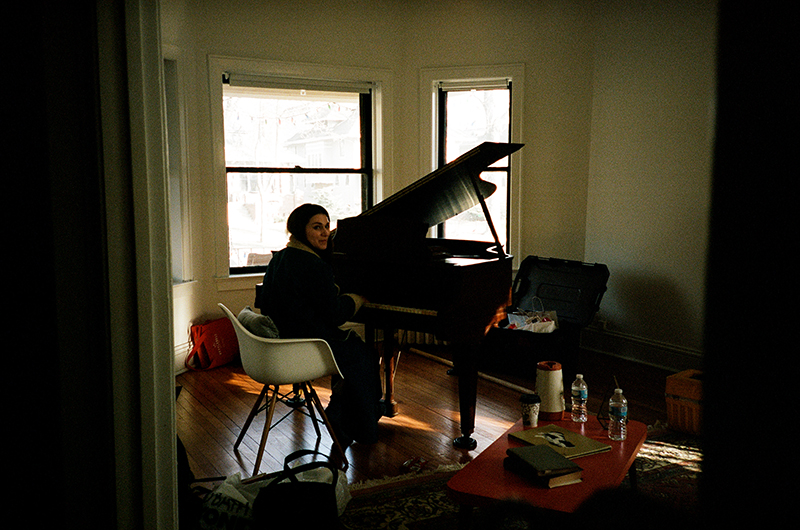 We asked Gehl about the process of conceptualizing these creatures and bringing them to life with Production & Costume Designers Nikki Milan Houston and Olivia Vincent, he replies: “It was incredible, but also stressful!  Nikki and Olivia are insanely talented filmmakers on their own with a history of being able to pull off whatever is needed under a tight schedule.  We had an extremely short turnaround time from when the project was green-lit to shooting, but when I reached out to them about making 3 entirely custom costumes in a week’s time, they hopped on board instantly.”

Gehl continues: “Our previsualization mainly consisted of figuring out the exact tone for each creature in the story.  It felt like there were so many monster tropes we were avoiding – any little change in costume could have skewed the narrative in a wrong direction.  We really took the time to figure out the right aesthetic for each creature so they could interact with Gia in the space and feel cohesive. From there, it was a matter of sourcing an incredibly random variety of items to create each creature, the tech one being the biggest undertaking.” 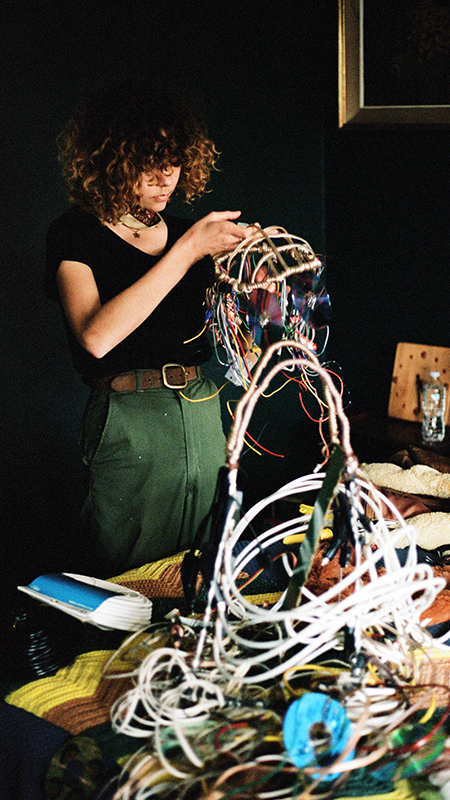 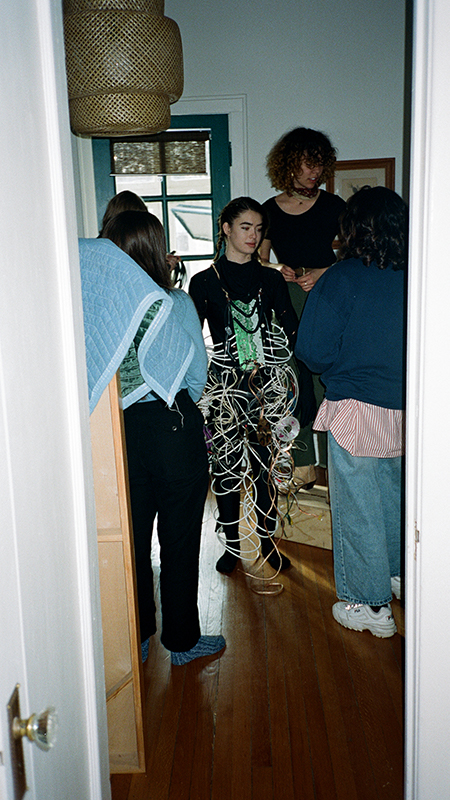 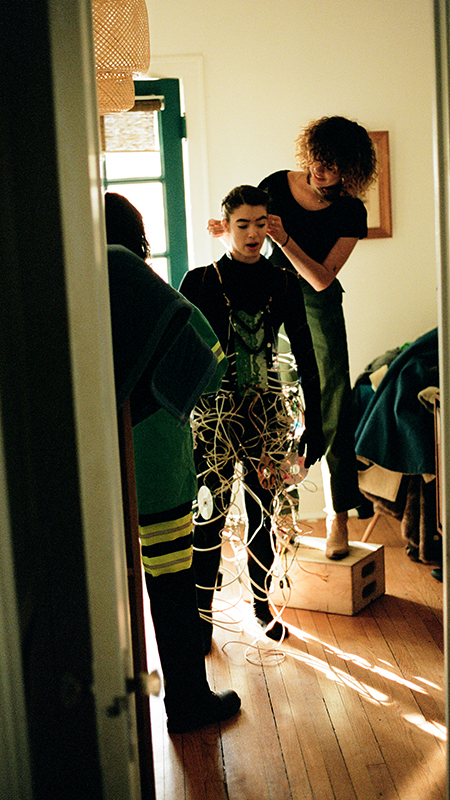 “The entire look had to be made from scratch with tons of feet of cable form thrift stores, Home Depot, and broken parts bins from tech shops.  I kept walking into places asking for all their broken tech and got lucky enough to find a handful of CD players we could scratch up for the look.  It was probably the most stressful element of the shoot but also the most rewarding to see come to life. I can’t praise Nikki and Olivia’s skills enough for making it happen.”

The choice to build the second creature out of tech from that specific era, the awesome classic headphones, the nostalgia-exploding discman and hand-scrawled mix CDs does have this profound effect on the authenticity and emotionality of the character that being made out of a curated Spotify playlist definitely wouldn’t have achieved. 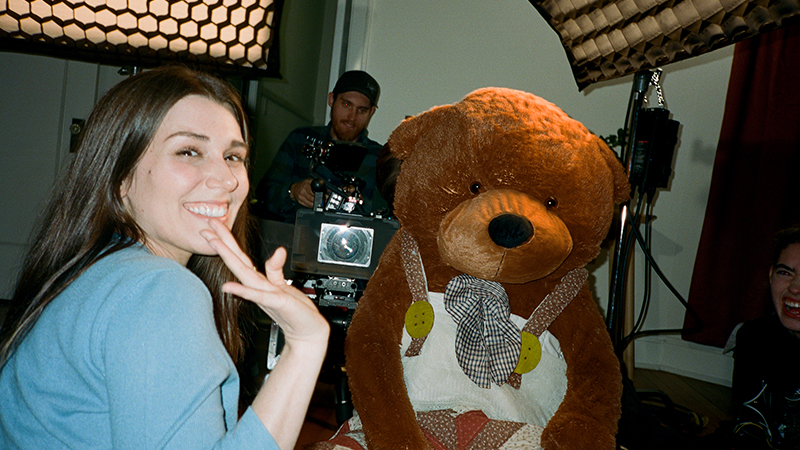 When asked about the decision to use specifically this area of tech, Gehl replies: “Using CDs felt tangible and right for everyone involved.  We didn’t want to go as far back as records or the radio cause those weren’t things Gia, I, or anyone else had a strong attachment to growing up.  We all had sharpie’d mixtapes that if we were to plug into the stereo now would cause a flood of memories. These retro set pieces felt honest and authentic for the story, and we hoped people who experienced them as well could identify with Gia as she encountered memories in them.”

This use of imagery perfectly encapsulates why this video is so successful. The way Gehl and his crew have been able to give this fantastical story so much relatability is truly masterful. To be able to take emotional attachment we can give to memories and objects and make it this tangible empathic experience makes for a truly engaging and memorable music video.

Here is the official video for “Birthday”