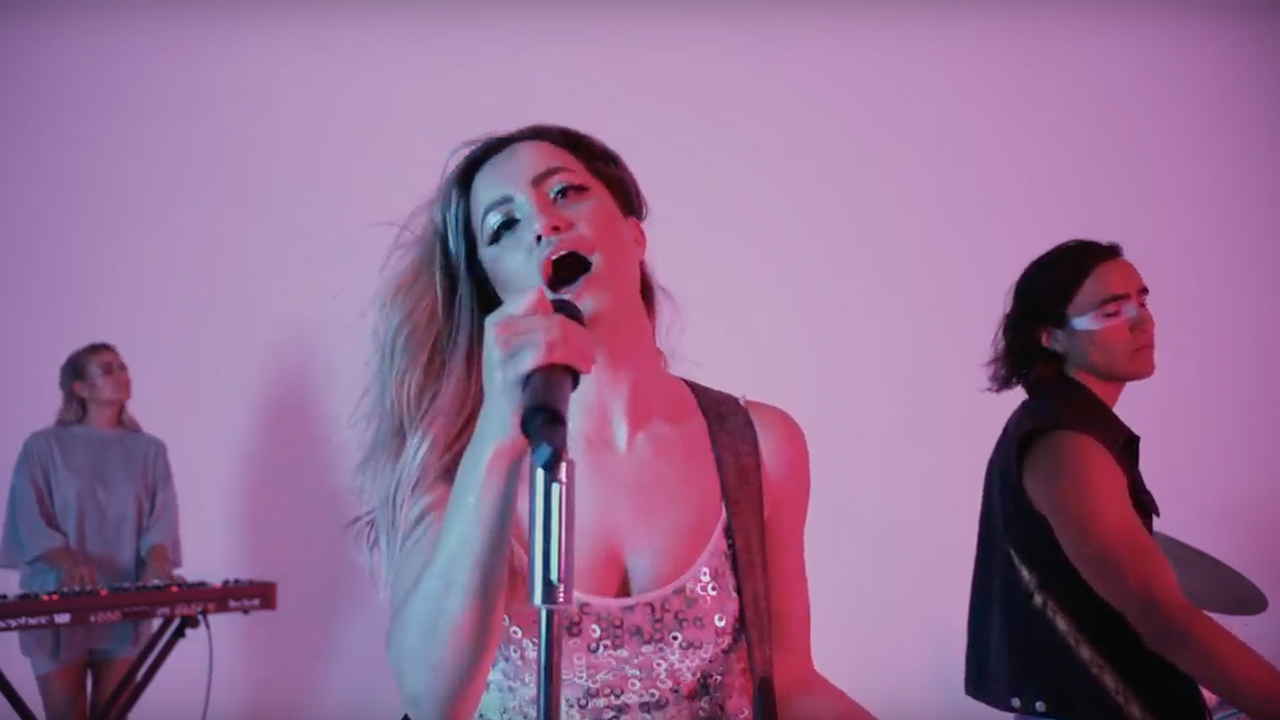 [dropcaps type=’normal’ font_size=’60’ color=’#ed145b’ background_color=” border_color=”]S[/dropcaps]o many of us hopeful souls dream of that L.A. life. The celebrities, the rooftop parties, the carefree endless West Coast summers, they pump it non-stop into our brains via TV waves and sometimes, the fantasy takes hold.

Such is the story in “L.A.”, the latest single from Newcastle power pop group JANEY, led by sibling duo Sarah and Billy Otto. The music so wonderfully captures that ideal of cruising along Pacific Coast Hwy in an old Cadillac with the top down. The uplifting and airy synths, that running bass line, it puts you right there in the passenger seat. 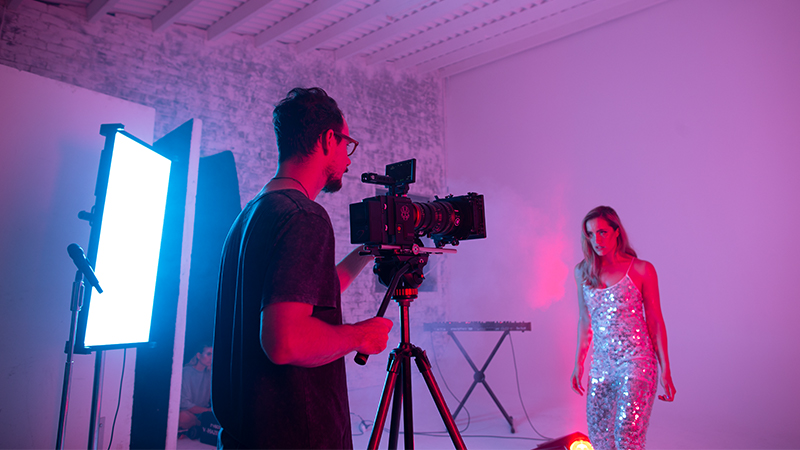 When director Joel Colthorpe took the reins for the visual accompaniment to the song, he and the band decided to take the whole concept of a West Coast Dream to the next level: “The band wanted to play on the idea of the L.A. dream, so, after swirling the thoughts around, they landed on the idea of our character being led into a dream state by the band as they played from another dimension, then transforming, with the aid of some magic elixir (with an iPhone light behind it).”

The video follows the man through this transformation from couch-bound to dream-bound, eventually finding himself dancing up a storm on a rooftop outlook. Colthorpe continues: “It was later in the edit phase that this idea evolved into the band appearing on the TVs and the ‘Cosmic Prophets’, as we called them, communicating from their dimension, through the electricity and the television sets – it was very Stranger Things. So, the band kind of became the conductors of the dream from the television sets as he slept.” 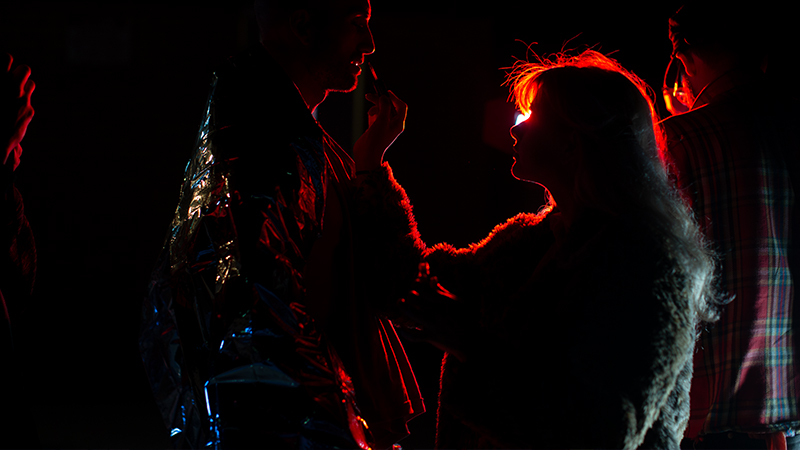 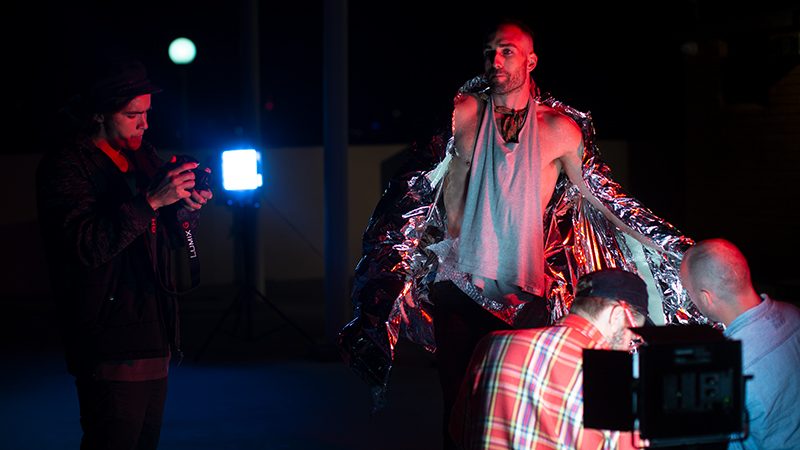 The video frequently cuts back to the band who exist in this bubble gum pink world of pure pop. They perform the song right to the viewer, inspiring the protagonist to go on his journey. Often the shots of the band are either sped up or slowed down, and band members are quite jagged and almost android-like in their movements.

Colthorpe explains: “This was a way of creating the artificial and alien vibe around the band. I wanted them to appear partly mechanical and was playing with the idea of that artificiality that a land like Los Angeles can possess. They were meant to look robotic or controlled in some sense, so this technique helped sell that.” 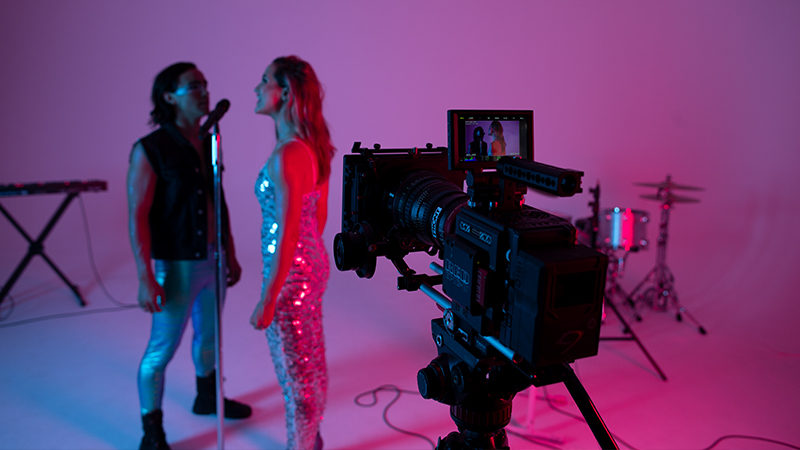 Also encouraging this out-there otherworldly vibe around the band is the use of colour, as they are drenched in saccharine coloured light. Meanwhile the shots of the dancing protagonist are also defined by their colour, from his dancing in the yellow fog of the hallway, to the eventual red tinged landscape of the rooftop. There is also a prominent silver motif that runs through the make-up and wardrobe of the band and the dancer.

When asked about these production choices, Colthorpe replies: “Mainly, colour was important for giving each scene its own look and its own feel, but there were story based roles for the colour as well. We wanted the band to be dynamic but also used the mixed pink and blue lighting to give an ‘other worldly’ or an alien feel. The goon bag wings were a cool way to bring the other worldly vibes into the final scene with Bryan Jeffs, our dreamer, and that helped create a visual connection to the JANEY dimension, once he had undergone a full metamorphosis.” 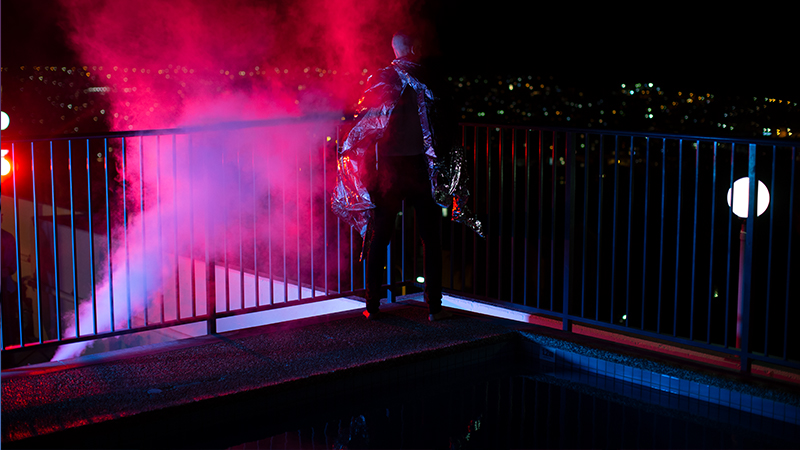 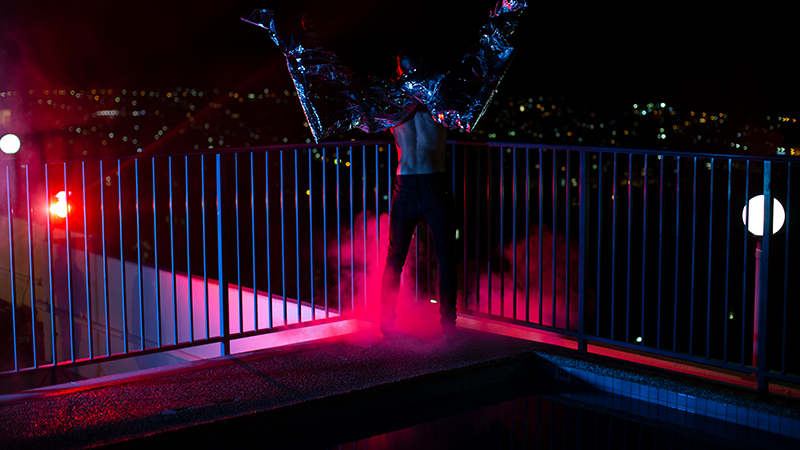 This metamorphosis scene is the culmination of the video. The dancer revels in his spotlight, spurred on by the climax of the song. Colthorpe brings such dynamic to this final scene through the edit, using jump cuts and occasional slow motion to really ramp up the energy.

“The final scenes with our dreamer on the rooftop is where the dynamics of the song and the story all converge, so faster cutting was something that helped give energy to that scene and I also wanted to show our dreamer from lots of angles to create a feel of many eyes being on him.” 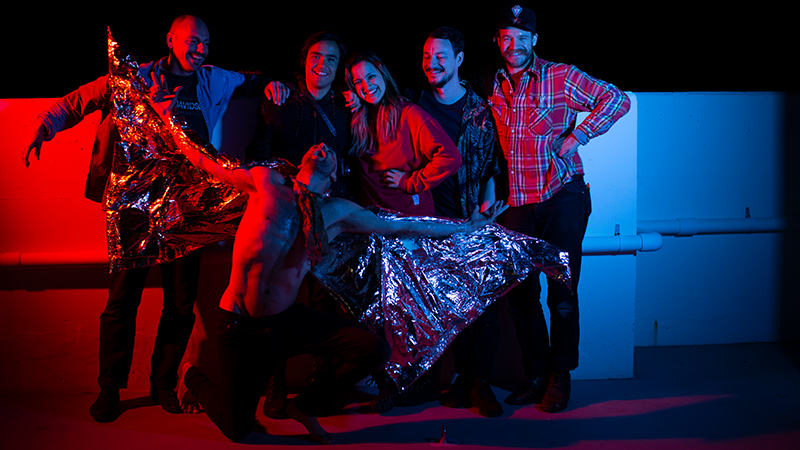 “This scene was, in-essence, his moment in the spotlight within the dream so I wanted it to feel like a stage. I also used the punchy cuts to manipulate the motion of the movement, so there are some shots where I’ve strung a few goon bag dance moves together, in sequence, to create one single motion.”

Colthorpe’s talent is on show throughout “L.A.”, giving wonderful life to a fairly-out-there concept and being able to capture that soaring and irresistible vibe of JANEY’s track in the movements of his video.

Here is the official video for “LA”