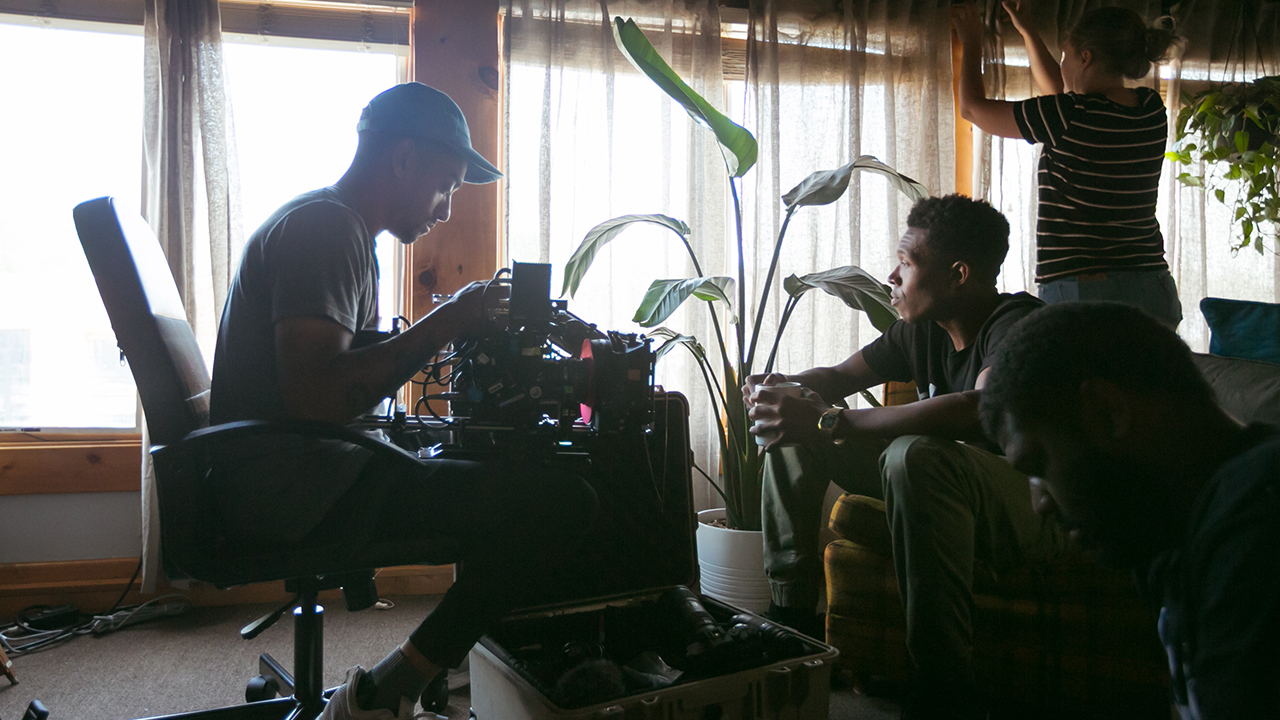 INTERVIEW: Morgan Cooper on his short film, ‘U SHOOT VIDEOS?’

[dropcaps type=’normal’ font_size=’60’ color=’#ed145b’ background_color=” border_color=”]L[/dropcaps]ugging road cases of gear to and from a shoot, being a one-person crew grappling with on-set personalities, taking on jobs you wish you could turn down, getting screwed out of pay in exchange for exposure, yearning to be in a position where this endless hustle is a thing of the past. It’s an all too familiar scene for any grass roots filmmaker. In ‘U SHOOT VIDEOS?’, Kansas City born and bred filmmaker Morgan Cooper paired these experiences with the very real story of Moji, another KC director who narrowly avoided being accidentally shot while on a music video shoot.

As someone who lived this struggle on his way up, Cooper wrote and directed ‘U SHOOT VIDEOS?’ as a tribute to those who endure the same lifestyle. Along with championing the one-man-band filmmakers of the world, Cooper also uses this short film platform to highlight the extra hurdles that are laid before people of colour in the industry. The film’s midpoint sees the protagonist Moji applying for a job in advertising. Moji sits in a waiting room full of inoffensive white dudes, and when he goes into the interview, he is greeted by two white gatekeepers who condescendingly encourage his “urban-ness” while he sits in front of a whiteboard of buzzwords, including a massive scrawling of the word “DIVERSITY”. 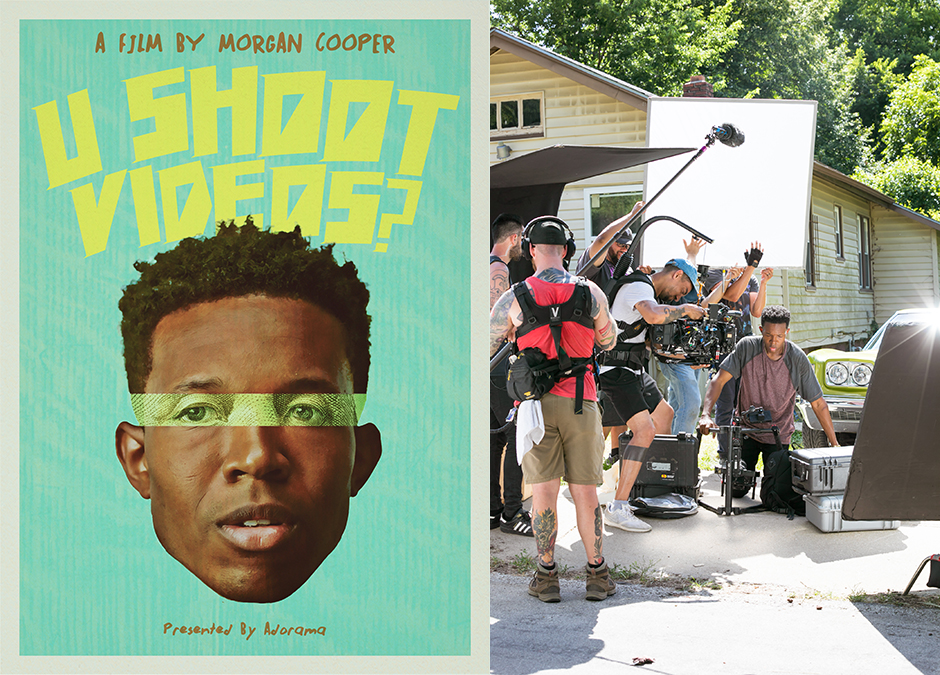 When the only solution to progressing in his career is presented to him as just getting out there and making movies, Moji reluctantly takes on another music video job that he had reservations about from the start. Moji’s anxieties are fully realised when the “not loaded” gun the performer is waving around as a prop goes off. The film then cuts to an interview between Cooper and the real life Moji who details just how close he was to being shot, if not, rather poetically, for his camera taking the bullet for him. It’s a brutally truthful conclusion to the film which gives the whole story such a deeper context.

We sat down with Morgan Cooper to talk about ‘U SHOOT VIDEOS?’ and coming up as a filmmaker. 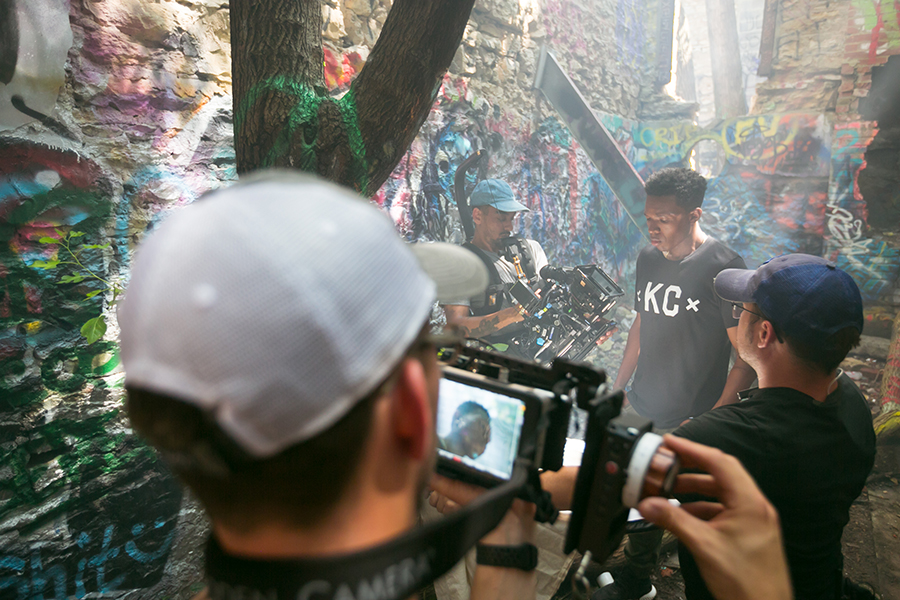 Your film ‘U Shoot Videos?’ follows a young filmmaker trying to “make it” and putting in the work. While the video itself is based on the very real story of Moji, it’s a very relatable story for a lot of filmmakers who started at that grass roots level. How much of your own story and experiences are in this film?

“So much of my story is in this film. In many ways, making ‘U Shoot Videos?’ was cathartic because everything and everyone in this film is based off of real experiences and real people in my life. The location that we used for Moji’s apartment in the film was my actual first apartment out of high school, so in a lot of ways this project was art imitating real life.”

The pivotal scene where Moji is interviewing for the advertising job felt painfully personal, this must be a fairly universal experience for a person of colour in this industry?

“Definitely. I hope things change, and I want to be a part of that change.“

The way you shot this scene was so interesting, everything bathed in clean white light, slightly over-exposed, lots of colours but nothing overly bold. It felt almost dreamlike or even like a faccade. Was it important for you to contrast this against the realness of the rest of the video?

“The imagery in this scene mirrors how I felt walking into these spaces at the beginning of my career. I would shoot a music video in the hood one night, then wake up the next day and walk into a meeting in a really sterile, corporate environment where no one looked like me. I remember the juxtaposition of these two worlds, and I wanted to create the same feeling with the visualization in the scene.“ 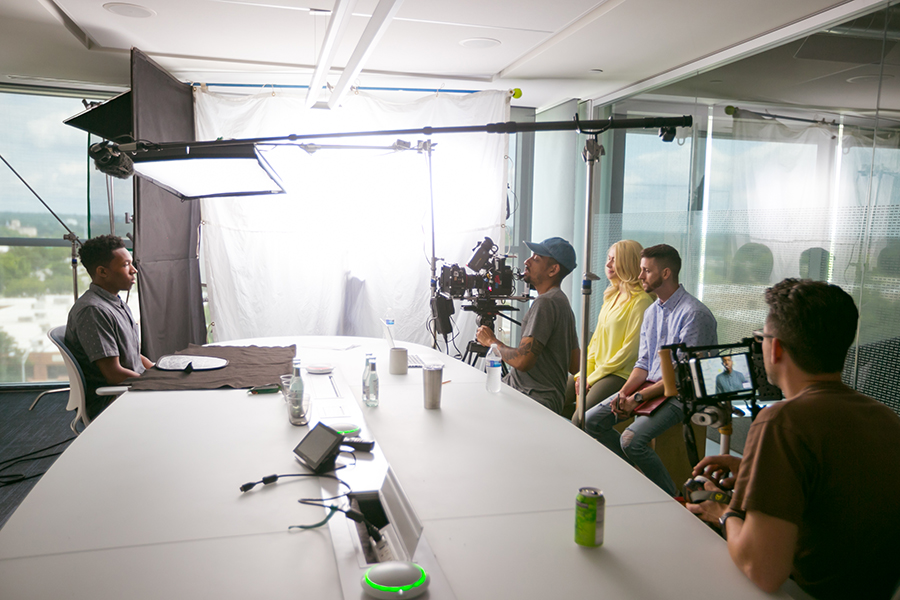 The conclusion of the film, the interview with the real Moji, closes the film with a message about keeping at your work but also taking care of yourself and your safety. Why was it important for you to make sure this message was heard?

“We often get so wrapped up in chasing our dreams that we forget to take care of our mental, emotional and physical health. I feel there is nothing more important than your health and safety, and I wanted to make sure that message was delivered through this film.“

Moji is a one-man-band filmmaker, doing everything himself. With that in mind, U Shoot Videos? is a film that you not only wrote but also directed and shot on the day. Even with a massive skilled crew around you, you still kind of took on that role of a one-man-band. Why did you choose to go that route?

“I was surrounded by an amazing cast and crew that supported my vision from start to finish. Working with such a great team, I felt empowered to tell this story the way I did.” 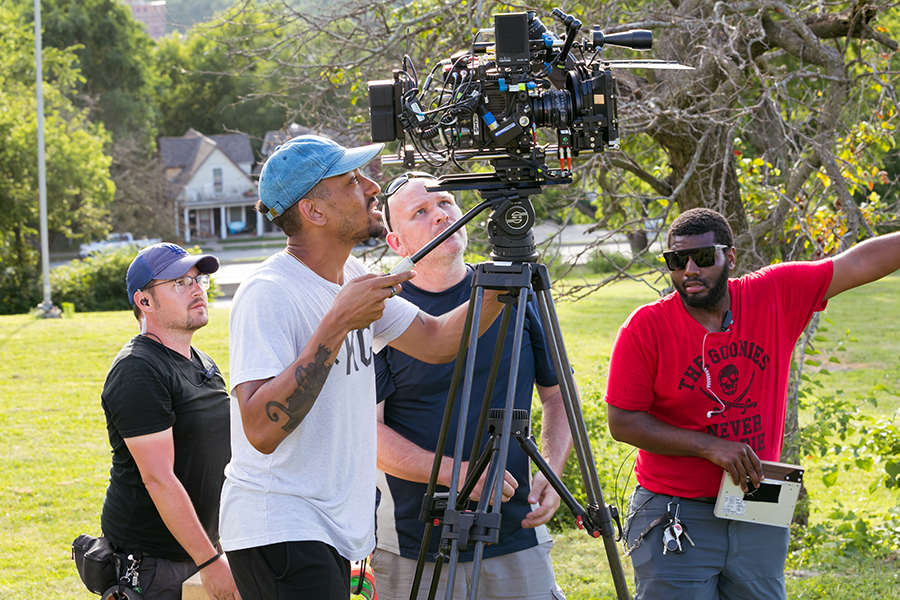 Given that the video centres around a filmmaker getting it done with what he has, some really decent but limited equipment, how did it feel to be shooting DIY Moji with a full crew and some really insane equipment?

“It was surreal! I was reliving so many moments of my life from a different vantage point. It was such a unique, beautiful experience that I’ll never forget.“

Moji spends a lot of the film trying to find a way out of making music videos. How do you see music videos right now as a medium?

“I think music videos provide a great opportunity to incorporate new tools, try out new collaborators and let your imagination run wild. There are no rules!”

Check out “U SHOOT VIDEOS?” in it’s entirety here: