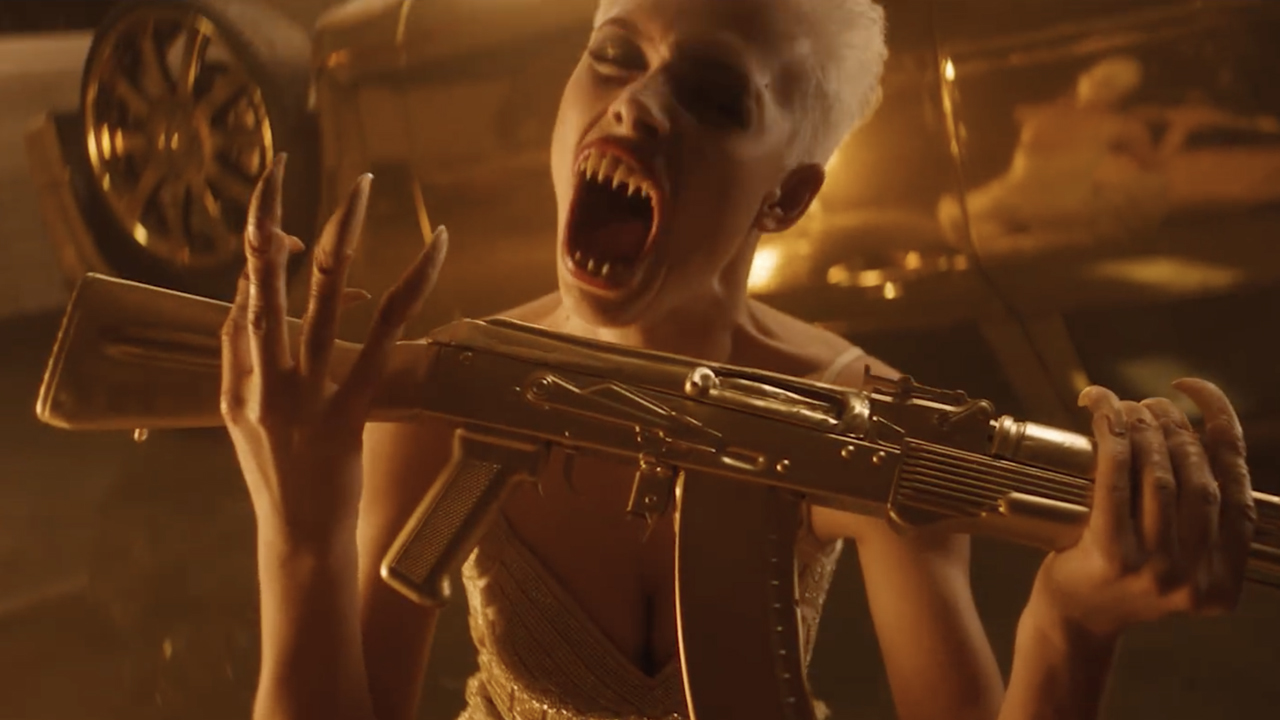 [dropcaps type=’normal’ font_size=’60’ color=’#ed145b’ background_color=” border_color=”]F[/dropcaps]rom the moment we are introduced to our killing machine protagonist, restrained to the gills like a savage Hannibal Lecter and being transported by a squad of battered, bleeding soldiers, we know we are about to be taken on a wild and violent ride, delivered with real cinematic nous.

When director Lado Kvataniya began to conceptualise the video, he wanted to put a spin on the song’s lyrical theme. “The artist sent me the song and the theme was about a gold digger woman who only needs money, so I created this monster who eats golds and diamonds, but I needed a paradox. I created a story about her punishing people who love money. She is like a devil who punishes people for their weaknesses.”.

This objective is executed with real subtlety. We are introduced to the video’s hero and are made to think we are meeting a succubus, a monster who uses her sexuality to seduce men in order to kill them and take their wealth. It is only through a gradual drip feed of information that we begin to understand that she is a Robin Hood type who preys only one those who commit evil, devouring their most-prized riches to leave them worthless. This culminates with the attack on her final victim, a seemingly innocent and naïve detective, who is eventually revealed to be hiding his wedding ring from her, in the hope of impressing her. He, of course, suffers the consequences. 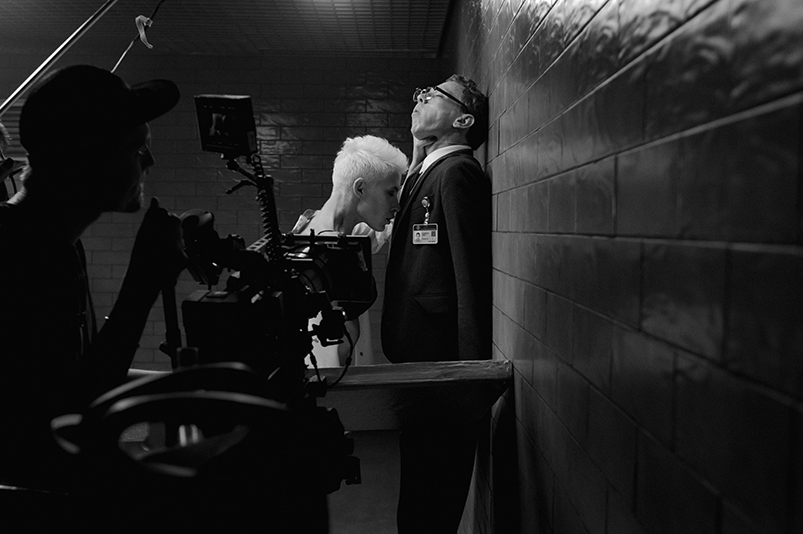 The true art in this video is the way the entire story is portrayed within variations on the one room. As our hero is interrogated by detectives, the room around them transforms as her exploits are played out for them right before their very eyes. Kvatiniya says “I wanted to create a short film and I liked the idea where she told investigators her side of the story. That’s another concept – movie in movie. She is the one who could tell the story best and I wanted to show it using cinematic instruments.”.

This is a massive undertaking, made bigger by some of the stunts that occur therein, a car crash, fights, a casino, all of which seamlessly take place within the brick walls of the interrogation room.

On the practicalities of this mammoth effort, Kvatiniya says “The idea to tell a full story in one interrogation room sounded for me like a visual challenge. In the beginning, I didn’t know how I could do this, nobody did. We used special technology, a virtual room. You create the decoration of the story and use a virtual camera. We spent 3 days with DOP Andrey Krauzov, CGF (VFX) executive producer Egor Solomatin and production designer Dima Onishenko, trying to understand how we would shoot it. My friend Ilya Naishuller, who produced this video too, helped me. After that, we took a table, two chairs, actors, iPhone and pre-shot all of the scenes. This project for me and all our team was a new level.”. 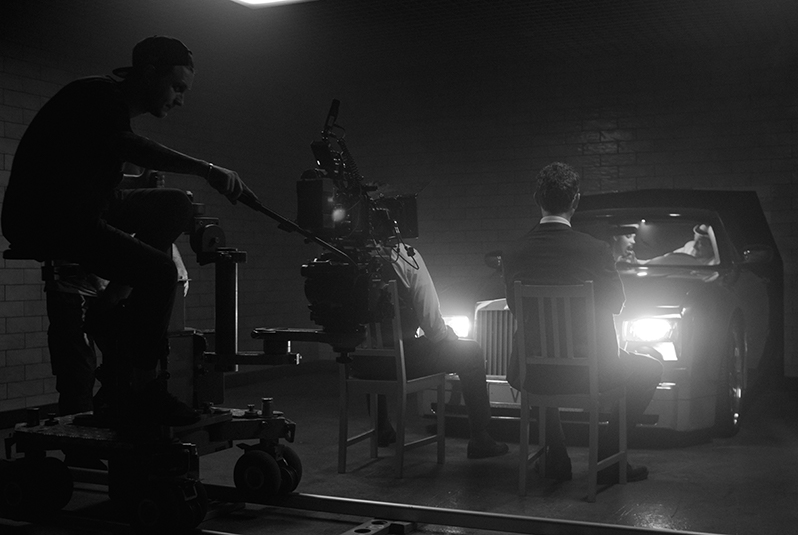 The use of some practical effects compiled with the aid of green screen gives the entire video a big budget feel. It is very clear for the final product that Kvataniya and his sizeable crew put all the effort they could into executing the concept in a way that not only showcased but enhanced the story.

While it is Kvataniya’s overarching vision that makes this video so successful, it is impossible to not see the contribution of others. The performance of the most charismatic actor in the lead role and the cast around her (including an accomplished cameo by Leningrad front man Sergey Shnurov) all deserve commendation. 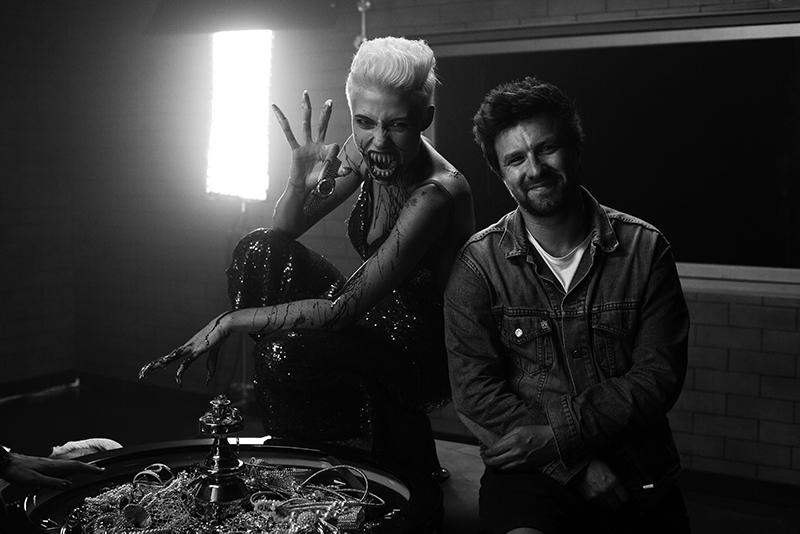 Much of the crisp cinematic look of this video can be attributed to the work of DOP Andrey Krauzov. Kvataniya has collaborated with Krauzov on many projects in the past, when asked why he felt Krauzov was the best choice again for this video, Kvataniya replied, “For me he is the best DOP in Russia (Don’t tell him I said that). I like his dark visual aesthetic – for this noir comedy it was the best solution.”.

Kvatiniya’s video for Gold is an original and engaging story executed with real class and vigour, a blockbusting power show delivered with a perfect balance of schlock sand nuance.

Here is the official video for “Gold”