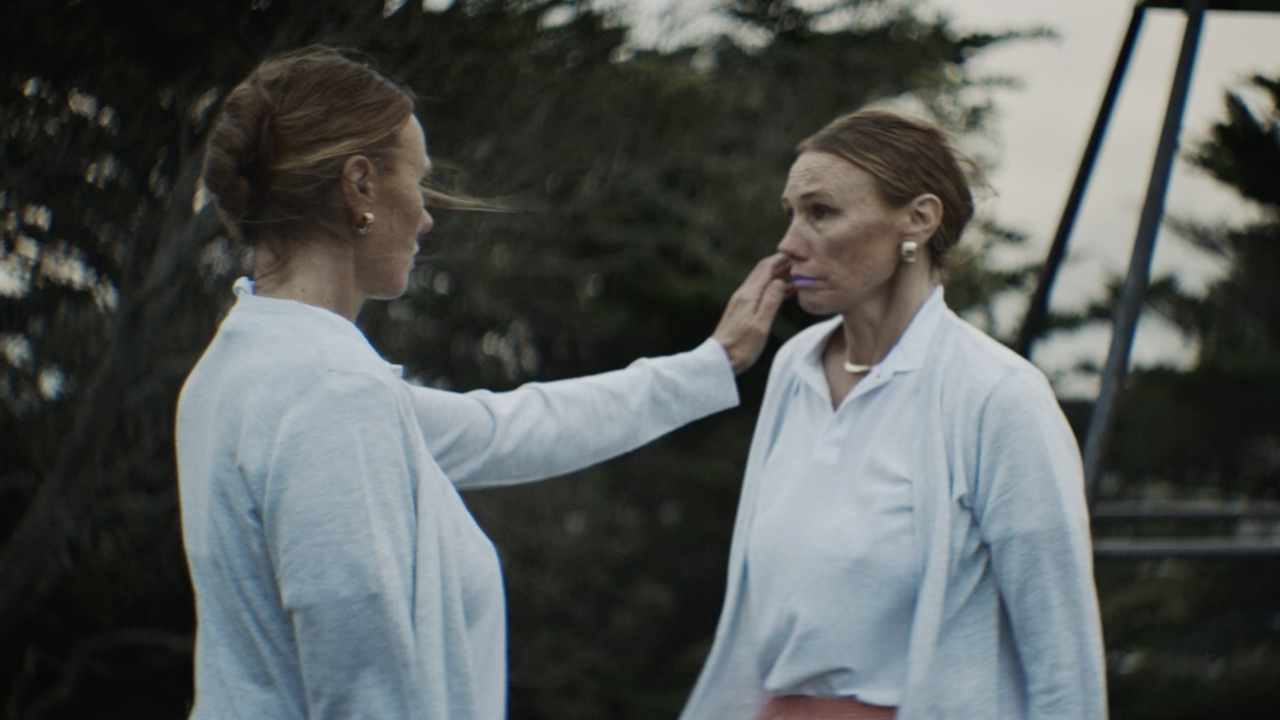 As her sanity begins to unravel, a woman is haunted by glimpses of her parallel self. As she is lured further and further from safety, she is forced to confront her demons in The Yukon Era’s suburban psychological brain-bender.

Director Dylan Pharazyn puts a lot of value in allowing the song to inform the video and this was certainly the case when conceptualizing this video for The Yukon Era’s ‘Tongue’. “The story concept came as a direct response to the song. There is a very heavy tone in the lyrics which feel like maybe they’re expressions of loathing of a jilted lover like there’s massive resentment in there… I started to think what if the darkness was self-loathing? So with the pairing of the images, the song becomes this kind of dark inner turmoil. I always look for a way to build a new piece with the combination of the song and the footage. For me, that’s when videos are the most satisfying.”

From this nucleus of strong feelings of resentment, longing and agitation, a surrealist doppelgänger story began to materialize, all it needed now was the working pieces. “The suburban setting and character were important, for me, these houses have this kind of faux security and safety laced into them – they’re conservative places which all look the same but within the walls there can exist loneliness or deep separation from the general public – a middle-class dystopia. This felt like the perfect place to begin and form the character’s world… Without needing the backstory, we find a privileged woman who is now living in fear, and paranoia. Her castle has become a tomb.”

The locations featured in the video really do play as a massive part in the journey of our protagonist. As she moves from the opulence and muted tones of her house, out through the decaying fringes of suburbia, up an almost fantastical mountain of lush greens and twisting branches, as the character’s reason is frayed the world transforms around here.

On selecting these locations, Pharazyn said “I wanted the real locations to heighten the story arc. She begins in the security of her dated McMansion, and then begins to follow the other her, through suburban streets and gradually into a more remote place where she’s more exposed – an escalating danger to the climax on the mountain top. I always look for the location to build the story… For me, this also built the level to which she was being drawn to follow, at first curious and by the end compelled to follow her other self.”

Pharazyn harnessed the extremely film-ready New Zealand landscape, both visually and contextually. “In Auckland, there are these kinds of suburbs which are highly conservative Nouveau-Riche which have a scary repressed vibe, and only a few kilometres away there are dormant volcanoes which have beauty but also a potential catastrophe sleeping within them.”

The hero’s journey through these locations is really enhanced by the manner in which the video has been shot. The use of predominantly practical lighting and the avoidance of other thriller tropes like tilted camera angles or horror themes anchors the entire experience in reality. “The doppelgänger genre has a surreal impossibility to the imagery, but I wanted the naturalism of the photography to counter this, so the doubles of the woman are completely real to her and to the viewer, making the sequence more powerful and emotionally true – this became a guiding approach to the style. We looked at lots of doppelgänger films as visual references but eventually felt a raw stripped back approach to the shooting was best, the kind of contemporary minimalism that is usually seen in purely realist cinema.”

The first half of the video is mostly presented in long calm shots, smooth camera movements and wide angles. However, as the song progresses, the ominous peaceful nature of the cinematography end editing begins to give way to something more tumultuous, more chaotic. This change particularly occurs with the crescendo of the song, where the song itself also takes a turn.

It was this dynamic shift in the song that really inspired Pharazyn in the first place. “This change in the music was the key to the concept for me, the emotional gravity that built and built to this cathartic release – it sounds like a psychotic outburst to me, a full meltdown, a deluge. This is the moment I look for in tracks when thinking if I’d like to put images to them, a moment when the song is turned on its head. This contrast gives a story idea a structural point – it’s vital in a video for me.”

The video’s climax leaves the viewer to experience the same unanswered questions as the hero. This sense of mystery and ambiguity was important to Pharazyn in the execution of the concept. “I like a layered interpretation of the story, a literal real world telling of her troubled relationship with someone, potentially her ex, having built a destructive schizophrenia, as she reaches breaking point. Or perhaps it’s a darker power in the universe playing with her existence… For me, this builds something powerful with a Twilight Zone weirdness – a nice abstraction which sparks larger psychological ideas.”

Here is the official video for “Tongue”