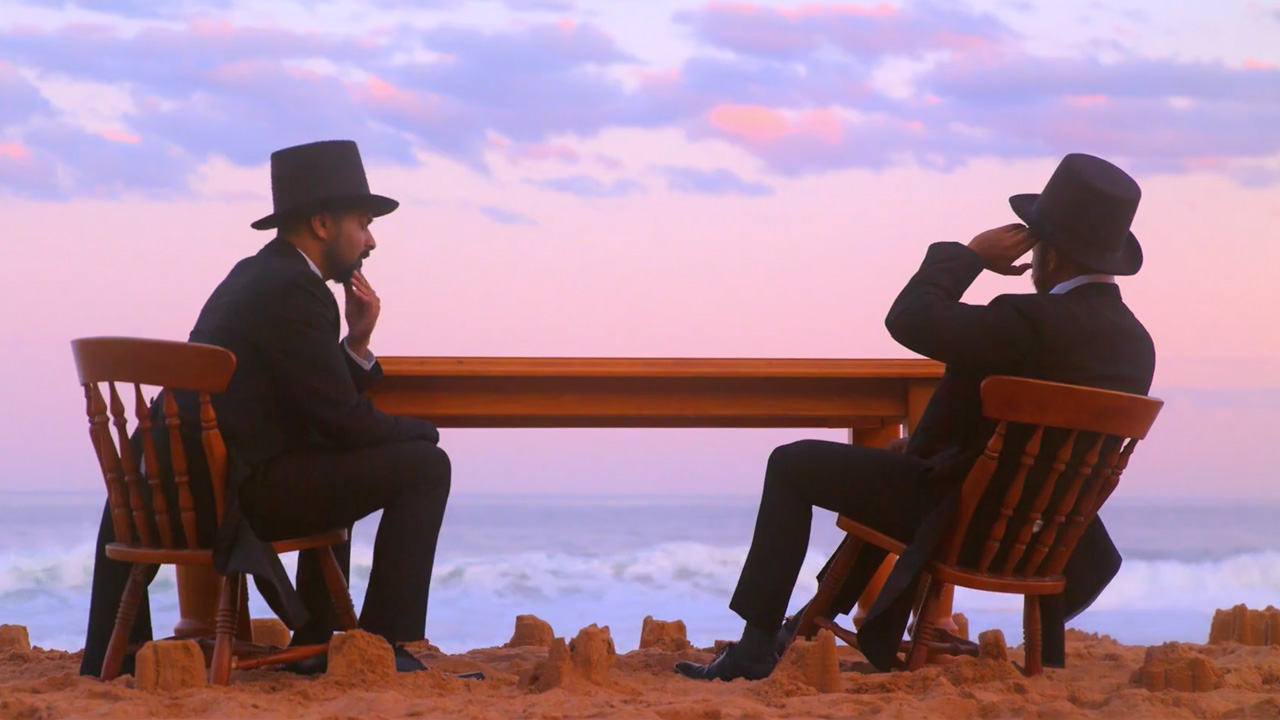 ‘Harder To Breathe’ is a dreamy, high-energy track with emotionally charged lyrics that shine against the backdrop of the clip’s eccentricities. Dande and The Lion have a tradition as a band, to allow the lyricist of a track creative control over a song’s visual portrayal. For this clip, lyricist Abbey wanted to pass over the writing and directorial reins to Natassa; this collaboration was described by Natassa as a great learning curve for the two, who communicated through the distance of her home town in Bristol, UK, and Abbey’s Sydney location.

“While wanting to maintain artistic integrity, it was equally important to me to make sure Abbey was happy and excited about it and having that balance of the two was the biggest influence on my directorial process.” 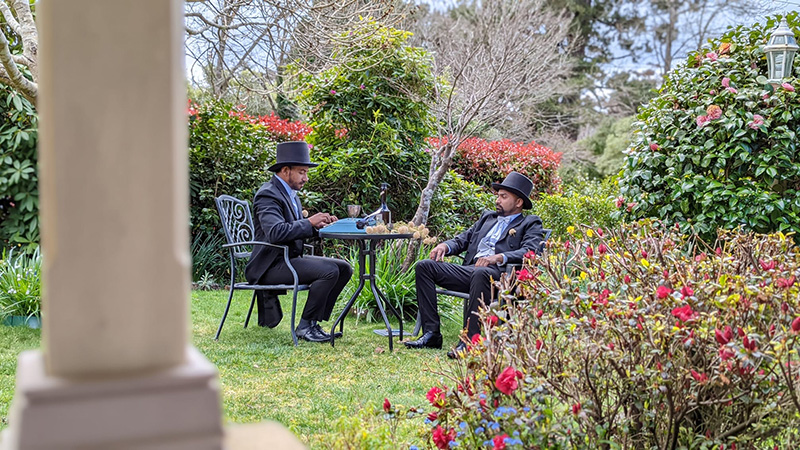 Lyrically, the song represents the feelings of being manipulated by someone in a relationship and through changing yourself to make them happy, you no longer recognise who you are. Natassa decided to expand upon this concept in the video, and said she intended to provoke thought on the systems within which we live, while also maintaining a lighthearted feel to the video.

“I think some of us can relate to this song at a personal level in relationships and I felt it was important to highlight the parallels this has at a macro level; the power of soft politics and the implications it has on influencing and shaping societies. I used a fairytale as one example of soft power, fairytales are often indoctrinated into us as young children as a teaching tool for how we should behave in society or expectations that we should have. This particular video references Rapunzal; a woman trapped in a castle where her ‘story’ (life) is being written and controlled by rich men in positions of power – Nick and Chris. The beach was used for Abbey’s location to highlight this entrapment. The clip begins with Abbey looking out of her tower and cuts to her at a table surrounded by sandcastles and political figures. I wanted the inner feeling of isolation and entrapment imposed on her by the Presidents that surrounded her to be juxtaposed to the vastness of the ocean to elicit a false sense of ‘freedom’; the Leviathan.” 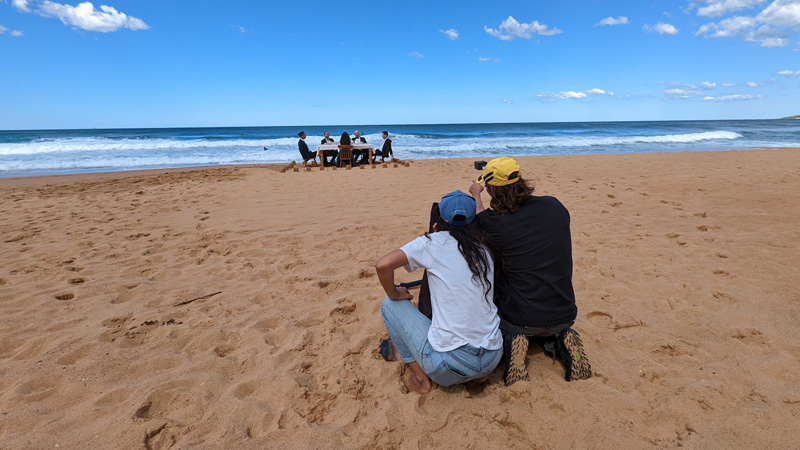 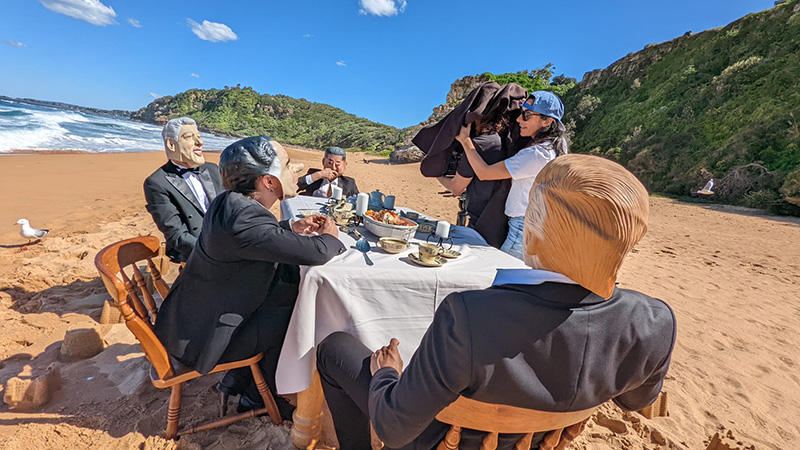 Natassa used some light compositing to pepper the video with surreal moments. In one shot, Abbey is seen gazing through a pair of binoculars while inside an impossibly tiny sand castle. It was achieved using a castle they selected at a pet store, and the use of a green screen. Abbey was then scaled down and superimposed against a close up shot. Facial masks are a strong storytelling tool in the clip, both for the narrative of Abbey, who pulls off her mask as a way to convey a journey of self-discovery and the reconnection to her identity and power after losing herself to the influence of the men writing her life, and for the men wearing the masks of political leaders.

“The President’s masks represent the political system within which we live. I tend to see the light side in almost everything and I’m naturally optimistic, but I won’t shy away from challenging the status quo, and in this case it’s provoking thoughts around the dark side of power, politics, government, and at a deeper level, the contradictory nature of democracy. The aptitude to galvanize fear within a society to manipulate and control outcomes or achieve agendas.” 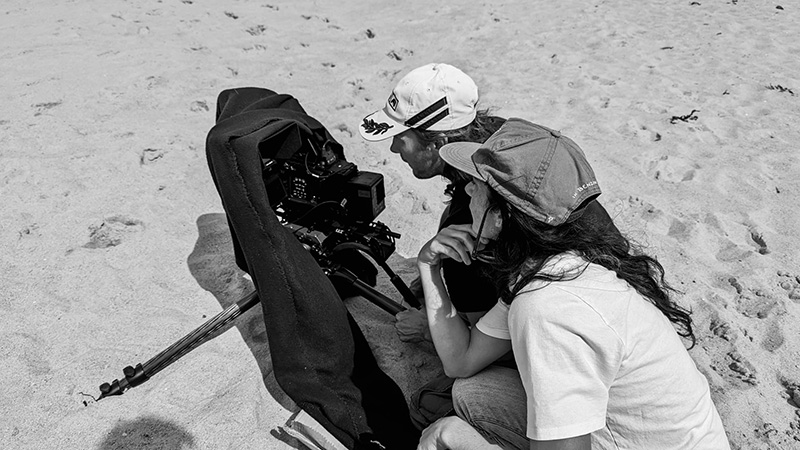 A pivotal moment of the clip, and Natassa’s personal favourite scene, is the group gathered around a table on the beach, engorging in a feast of roast chicken while Abbey plays with the plate of sand on her plate. It’s the final straw before Abbey’s had enough, ripping off her mask and confronting the others. Natassa commented on the deeper thematics:

“I wanted to highlight political power at its ugliest, pulling apart what was once a living entity with no regard. On a macro level, I wanted to show the grandiose ostentatiousness that often occurs at that level and contrast this next to Abbey who is alone, taking up little space and isolated.” 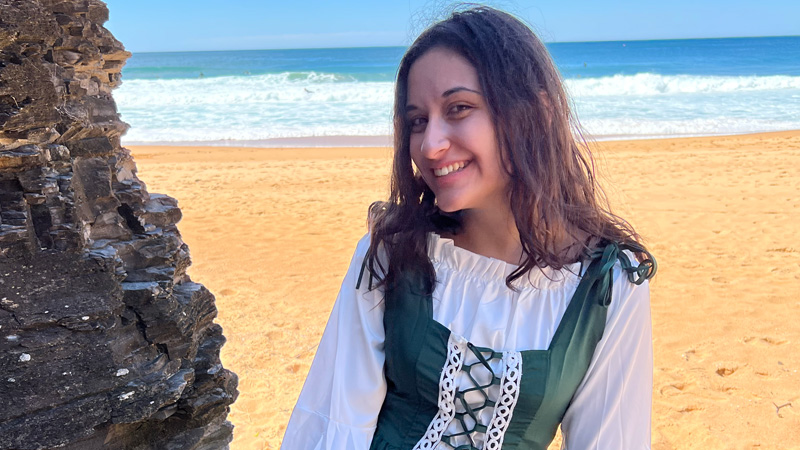 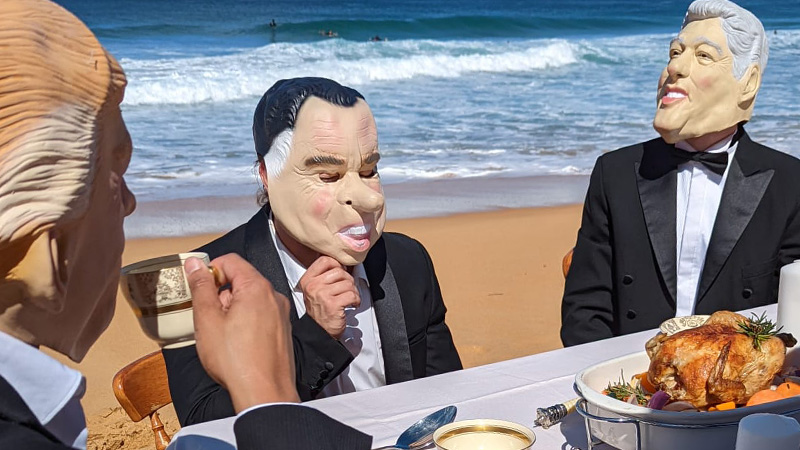 Natassa grew up watching many of Anderson and Tarintino films, and drew inspiration and influence upon their styles for the video. A lot of the shots are framed as extreme wides, with elements of the frame composed symmetrically. Even the striking yellow opening credits with heavy drop-shadow mimic the titles seen in Pulp Fiction. Natassa continues:

“The quirkiness and oddities of Anderson’s shots; the boldness, the symmetry and use of colour.  I guess Tarantino influenced me from the angle of giving a strong point of view and not being afraid to provoke thought through dark humour, which is super difficult to get across without dialogue so hopefully that translated.” 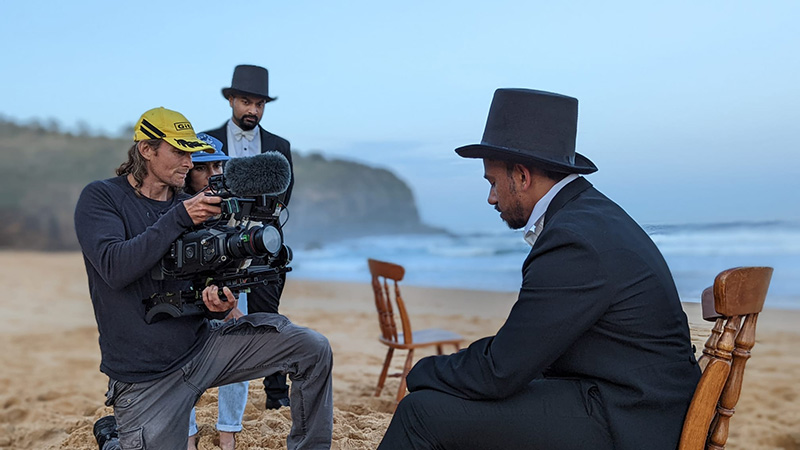 Cinematographer Simon Watts opted for a Blackmagic Ursa mini pro and Canon Cine lenses, resulting in a clip that felt clean and cohesive. As a member of Dande and The Lion, Natassa possessed a unique perspective and understanding of the band and its music that an outside director would not. This resulted in an impressive end result for Harder To Breathe, Natassa’s second time at leading a music video, following her directorial debut for the band’s Higher Places. The clip is a testament to Natassa and the band’s vision, and we look forward to seeing what they create next.

Here is the official video for “Harder To Breathe”