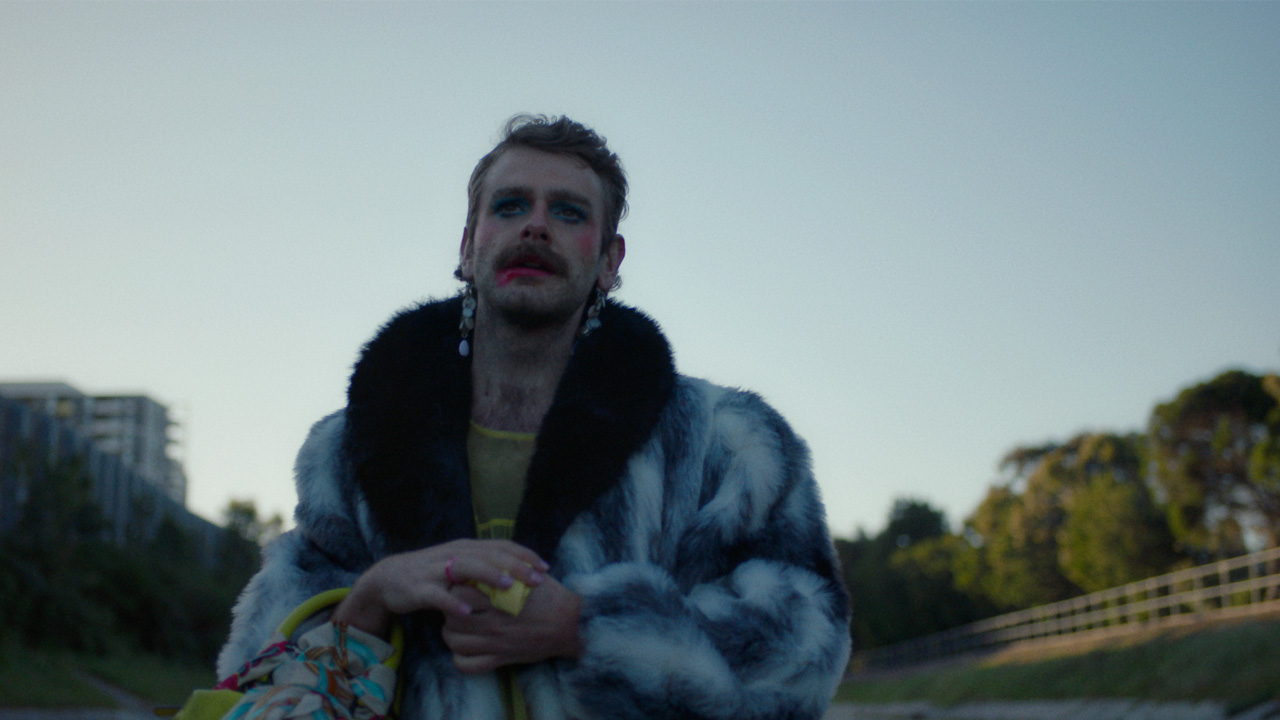 [dropcaps type=’normal’ font_size=’60’ color=’#ed145b’ background_color=” border_color=”]T[/dropcaps]wo years into director Sarah Hickey’s music side project Glittertears comes her second music video, one that’s extremely on-brand to the project’s title. Staying true to her self-imposed ban on ever appearing in a music video for her own track, the clip stars Yoann Yvon Raphael Pereja adorned in an eye-catching yellow dress and fur coat, tears smudging his makeup as he processes the events of a night out. The clip is a love letter to dance-crying; an emotional and physical release of negative emotion that’s often ugly and embarrassing but is always ultimately cathartic. There couldn’t be a more fitting video from a director whose fascinations include ”all things nostalgic, sparkly and a little bit broken”

“Being a story about leaving the past behind us, and controlling the way in which we move forward, we loved the simplicity of our barren location. It’s so clear that our character has had a hard night (represented by the city skyline behind them) and opted for a long walk home. Sometimes when we are in those numb mindsets, we choose to wander and take the long route. This location gave us the perfect backdrop to tell two slightly altered realities as the sun rises on that character’s next day.” 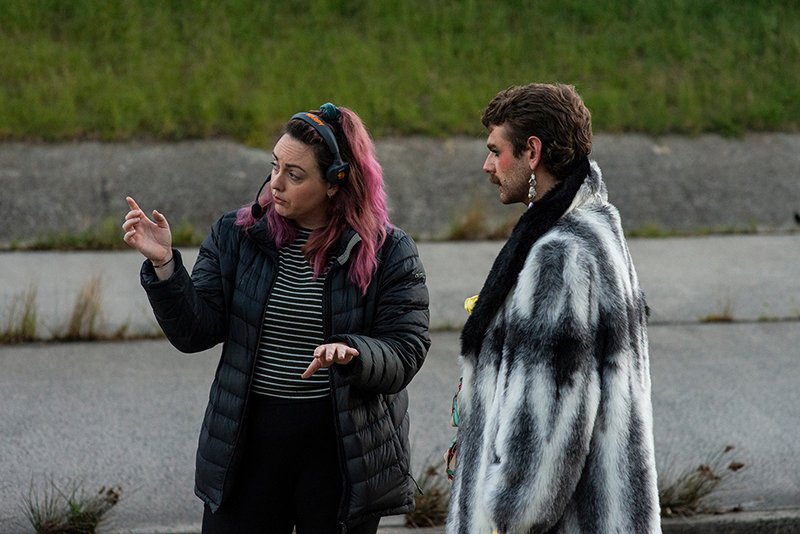 Midway through the video, the scene restarts and we’re treated to an alternate version of the story that just played out. It’s a music video concept that Hickey’s tried to get off the ground four or five times in the last 2 years but was delayed time and time again due to lockdowns. With each cancellation came adjustments and rewrites, which eventually evolved into this streamlined version of the original concept.

“There were so many different ways this concept had been imagined, but that was definitely the consistent central idea; the idea of one reality playing out followed shortly by a rewinding and second reality unraveling in a slightly different way. In stripping the core of the concept back, I hit up my dear friend and choreographer Jason Teasdale to help me bring this physicality to life. Rehearsals with the two of them in that large drain prior to the shoot will be one of my fondest memories of 2021.” 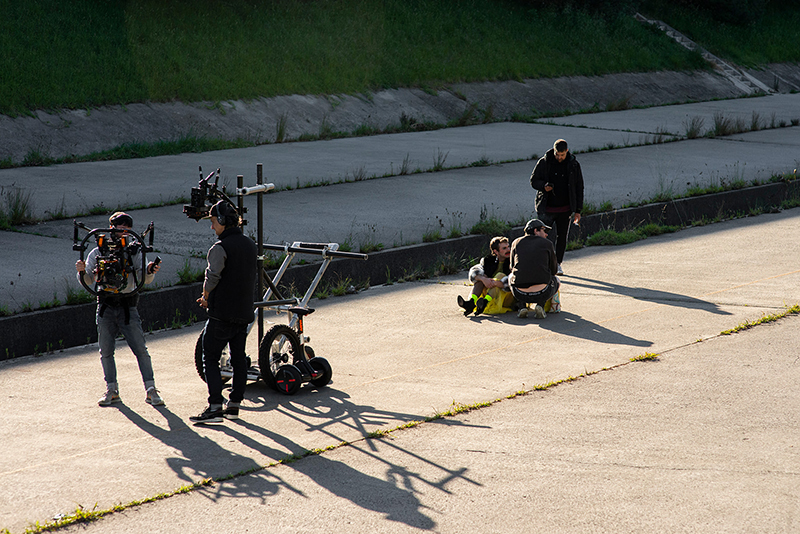 In the second reality, signified by a different colour balloon that floats by Yoann at the start of his walk, Yoann tosses aside his garments one by one, strutting more confidently with every shed article. With the stress of life strewn in a heap behind him he begins to dance a confident and eccentric performance, ending the clip with a striking pose and a look back to reflect on his experience.

“…My dear friend Shannyn Higgins once photographed Yoann and I simply came to follow him on his Instagram account (a fangirl if you will). I love Yoann’s unapologetic sense of self and how he embraces his art of styling and makeup as a part of how he expresses himself. Yoann is the kind of person that I thought would be perfect to be our spirit animal this New Years Eve, because this character is all of us at the end of our tether becoming infectiously free.” 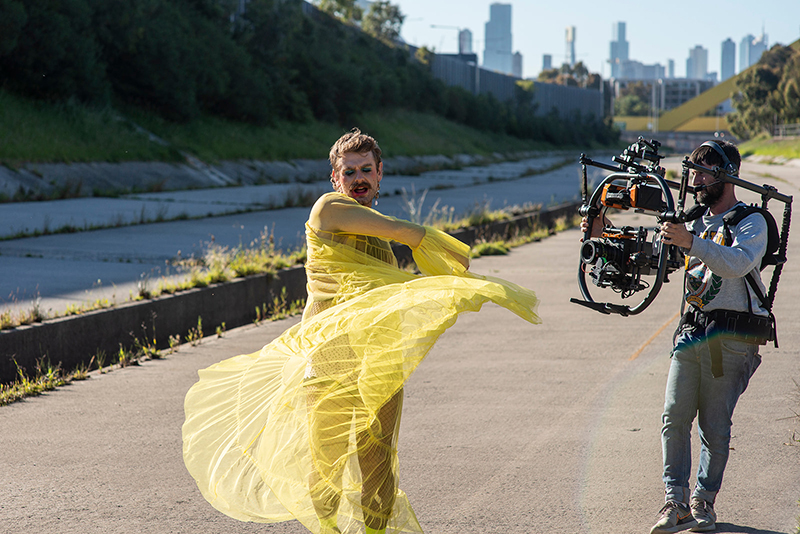 The constant smooth motion that accentuates his performance was the result of impressive equipment being operated by an even more impressive crew. With alternate takes needed for each angle it was important that the small crew were on the ball with rehearsals, and though they were able to save time by not setting up lights, they had to work faster to accommodate the natural light at the location.

“As I’m sure you can imagine, it’s a challenge to work with natural light, and it requires good planning, a swift game plan, the right team and the right equipment in order to work quickly. I knew that we’d need two passes of each frame for each reality, and that would likely be it, so rehearsals on location before the day were crucial. Beyond this, we worked with a Rickshaw and black arm (courtesy of Juzzy Kane and thelegends at Harpy Creative) and a good operator/DP combo who were familiar with the formation. Keeping the shot list simple – but effective – was key for getting through the material with enough continuity of light on this one. Thanks to a few stars aligning, we shot this one on the Alexa Mini LF and on Leica Summicrons. DP, David McKinnar, loved the idea the graininess of pushing an Alexa in low light, and I love the overall tones too.” 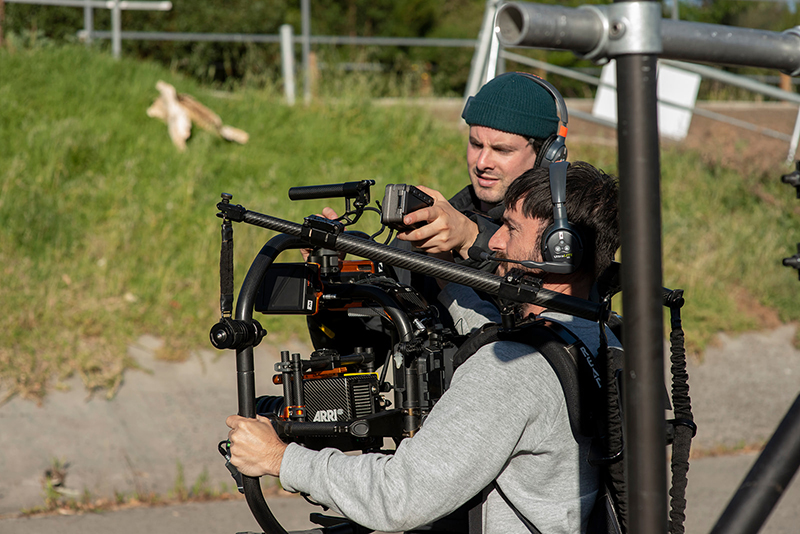 For Sarah, Glittertears is often more of a directorial project than a musical one, an artistic outlet that provides opportunities to work with a close knit and talented group of collaborators. This is as true of Dance It Off as it will be for its inevitable successors.

“Glittertears is such a low pressure music project, that it tends to be more about the films than the music for me. Or at least, the pairing of. Giving the music video directing duties to someone else would take 50% of the project’s purpose away for me, so it’s unlikely I’d go down that path. Heading into the future, it will always be a project that takes its time, and only releases singles with a story-based clip to accompany. Clips can completely change your perception of a song, so for me, it’s imperative to release them concurrently.” 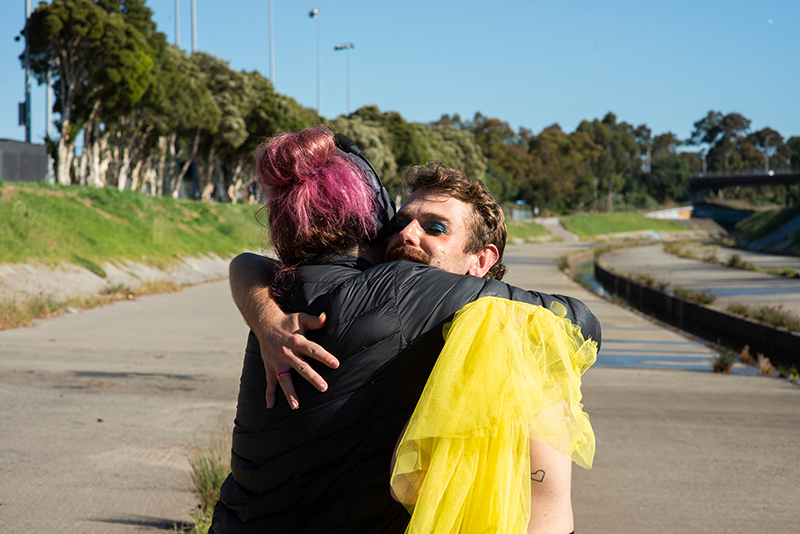 More than anything, the clip serves as a simple yet satisfying creative endeavor to with which to shake off the creative cobwebs of lockdown. A piece that can both accompany the music track, and serve as an indicator of great things to come.

“Usually, I love to plan something a bit more complex, but this clip is much more about simplicity. We’ve all been hurting these last two years, and at the heart of it all I just wanted to make sure it was a concept that made people smile – through relatability – this New Years.”

Here is the official video for ‘Dance It Off’