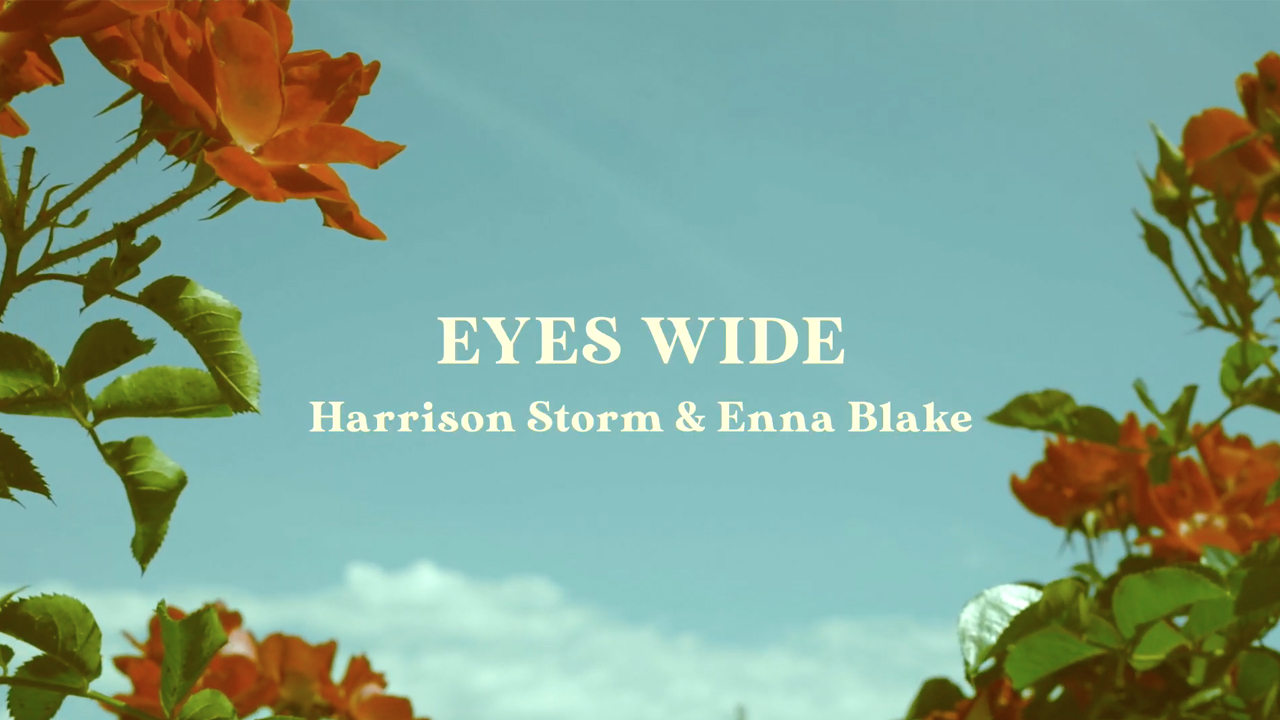 hile most video clips scream out for your undivided attention, ‘Eyes Wide’ encourages you to retreat entirely into your own head. The new music video is directed by creative powerhouse, Saskia Burmeister, best known for her AFI Award nominated performance in the beloved Aussie classic, ‘Hating Alison Ashley’. Now, working her magic as an actor, photographer, and filmmaker, she’s realised a project that couldn’t have come at a more perfect time. 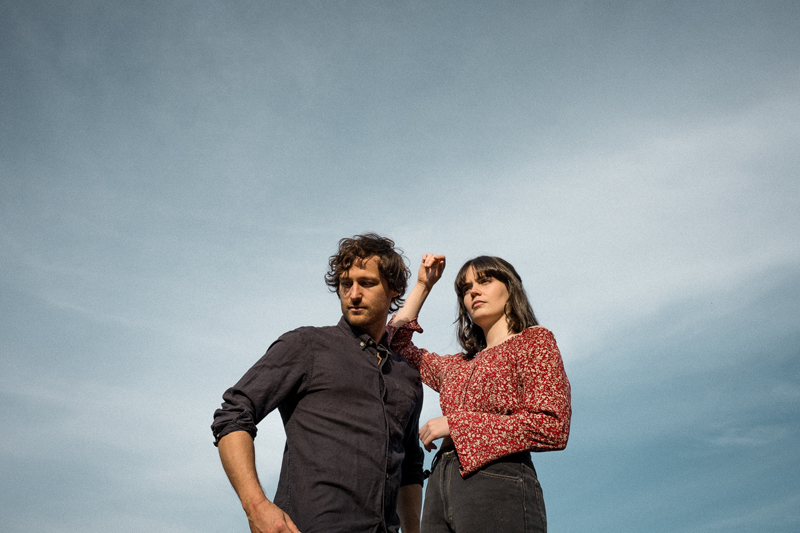 The song itself, written and performed by Harrison Storm and Enna Blake, is a dreamy note-to-self about personal growth in times of adversity. Saskia’s ideas are much the same. It’s an intrinsic collaboration, drawn together by the all-too-familiar experience of creating in lockdown and, as if by fate, both retreating to their seaside homes.
“When I listened to the song I was immediately taken with the feeling of learning and growth. I kept thinking about the moment when clarity hits and we look back on an experience with understanding. When Enna and Harrison approached me to collaborate, most of Australia was feeling the fatigue of numerous lockdowns. I kept thinking, what’s life going to be like after all this? What journey have we all travelled through, as a generation, as a nation, community, world? This idea of finding a new sense of peace after the storm really excited me.” 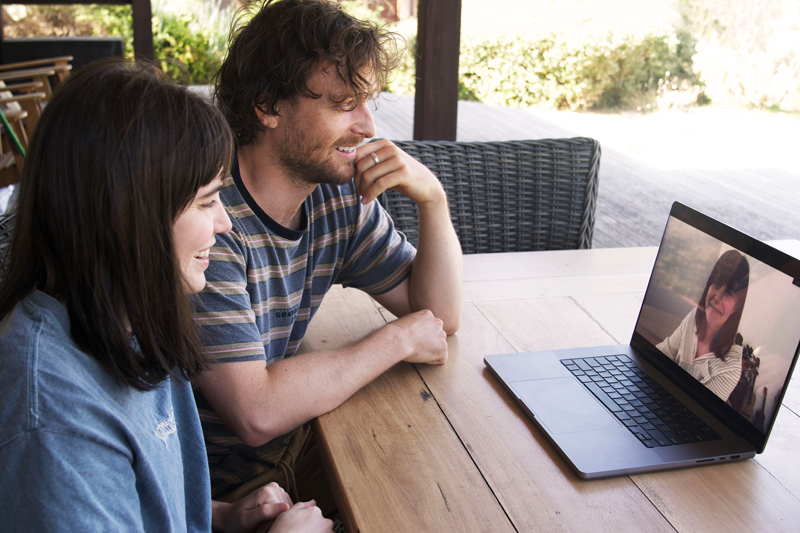 The clip treats you to a perfectly cut sequence of close-up nature; roses, blue skies, rippling water, rock, and thicket. The use of hand-held allows the camera to breathe with the imagery. Before long, the well-paced visuals will pull you into the track’s own ebb and flow. It’s a complete synthesis that could only have been achieved by Saskia having completely enveloped herself in the process.

“When all the footage was there, I kept listening to the song, over and over, and really tuning in to what the song made me feel in each moment. I played with the cut points and found a rhythm that showcased the song’s natural ‘in and out breaths,’ which allows the audience to experience the clip and song together as a holistic experience.” 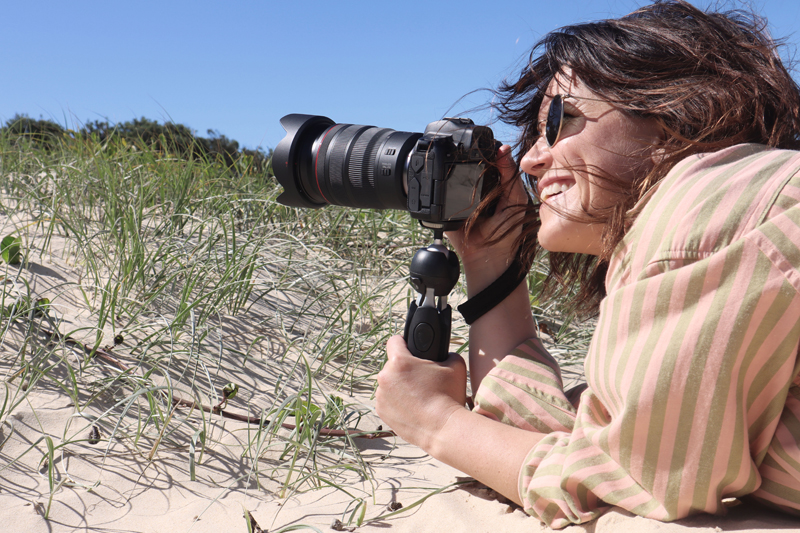 At the outset of the project, the team agreed that the nature motifs in the lyrics were crucial to the clip; “Will my roses come up?”. Luckily for Saskia, her stomping ground was overflowing with roses. When poring over masses of flowers, she selected colours and textures to play off one another on screen. Casting the roses in a shallow depth of field using f/1.8 proved just as important. Between the focal haze and floating camera, the clip invites the viewer to lose themselves.

“We explored playing with subtle choices that would amplify the themes and create imagery that would make the audience ‘feel.’ We trusted that this, coupled with the song, is enough to hold the space and convey the message. It’s about the feeling you get when you’re out in nature, that feeling makes the audience think ‘hmm… where did I come from to get here?’ and thus reflects on their own journey.”

Saskia Burmeister getting creative with the edit. Credit: Jamie Croft

The clip’s visual language seems to expand as the frames get smaller. Cropped to resemble 8mm film, vignettes of the sea and sand are reframed with a strong sense of nostalgia. It’s coolly sentimental. There’s a transience to these smaller pieces; the audience can put them back together with a sense of discovery.
“I decided 8mm was the most direct technique for showing reflection, almost as if these are home movies. I wanted it to feel like when that moment of realisation happens and you just must write about it, or film it, or photograph – otherwise it might disappear. Like a stream of consciousness. In this case, ‘they’ grabbed their camera and had to document it. As a technique it also gives some light and shade to the clip, and offers moments where the rhythm changes, a contrast so we can really enjoy the slower moments, which in turn gives them more weight.” 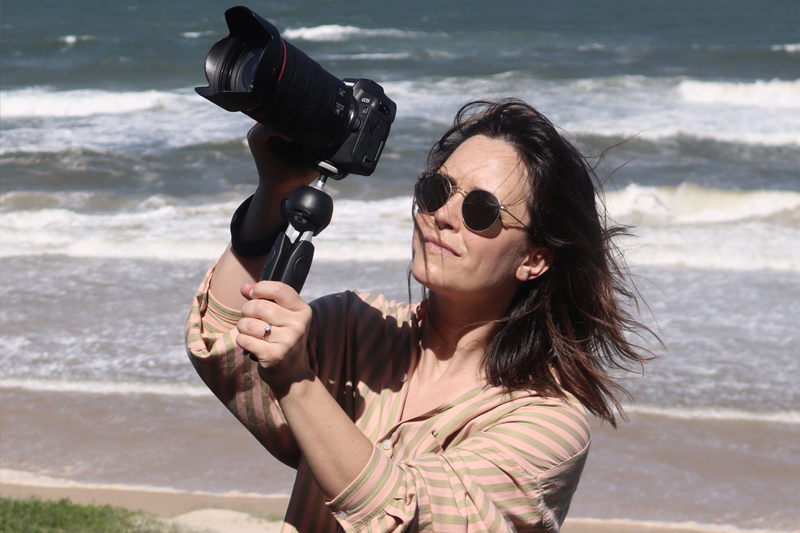 The music video was filmed in Saskia’s picturesque backyard on the mid-north coast of NSW. Equipped with her Canon EOS R and a 50mm lens to match the perspective of the natural eye, she set out to let nature do its thing. Though Saskia captures her hometown with an intimate familiarity, the settings remain beautifully ubiquitous. She gives the viewer plenty of room to reflect and imbue their own meaning.
“Filmmaking is always a whole lot of problem solving. For us, lockdown and its effect on the concept and the weather were the biggest challenges. There is a lot of liberation in trusting the process and not being too fixated on anything. I had two weeks until delivery and that was right when La Nina hit, torrential rain up and down the East Coast for weeks. However, after speaking to Harrison and Enna for the first time, there was a chance for blue sky the next day, so I cleared my schedule and crossed my fingers. The sun did come out, so I raced around and captured as much as I could. So, it was a case of get out now and film, film, film.” 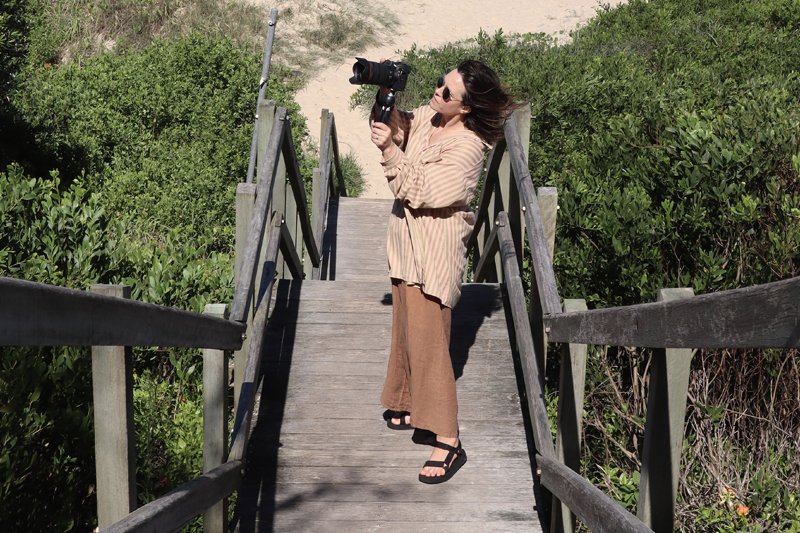 This walk in nature plants signposts to better things; deeper appreciations for yourself, and for the resilience of the creatives who persevered in isolation.
“It was my moment of realising that as creatives during COVID, we all have to stretch ourselves and do things differently. In this instance, it was about pulling everything back because we were in lockdown. But we have to keep creating, keep highlighting experience through art.”

With a concept born out of restrictions and constraints, it’s fitting that there wasn’t much choice but to keep it simple. But in the case of ‘Eyes Wide’, simplicity only increases the scope. Saskia Burmeister creates a wide-open space for you to feel your way through. It’s everything we ever needed after the past two years.

Here is the official video for ‘Eyes Wide’