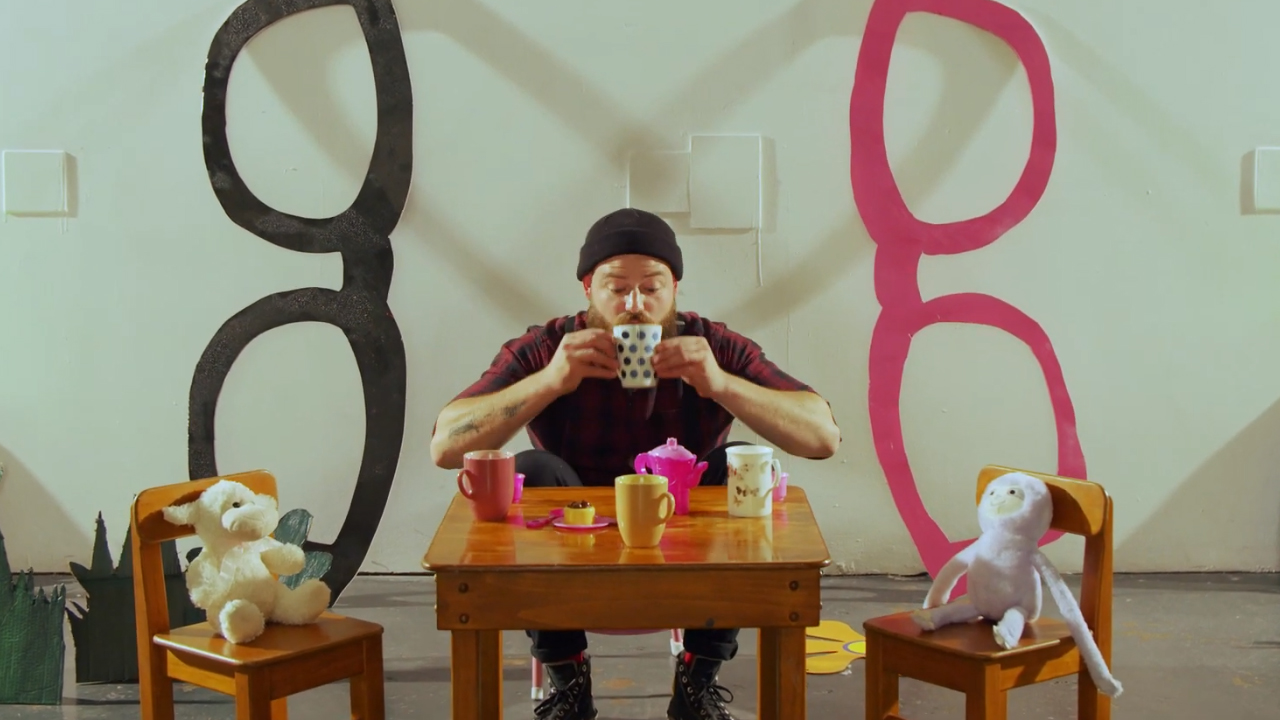 [dropcaps type=’normal’ font_size=’60’ color=’#ed145b’ background_color=” border_color=”]M[/dropcaps]elbourne rock band Okay Dane, known for their brand of fuzzed-out dynamic rock’n’roll, have stepped up the energy and maintained the rage in their latest offering ‘Headache’. According to the band themselves: “We’ve always had a love of punk rock and we’ve wanted to make some thrashy punk for a while, we’ve spent a lot of time this year listening to bands like Clowns, PUP, and Idles. Listening to those bands has really re-invigorated our love of punk. With this song the initial goal was to write something to open with live that’ll get peoples heart-rate up and that we could lose our minds on, I feel like we hit the mark with that one!” 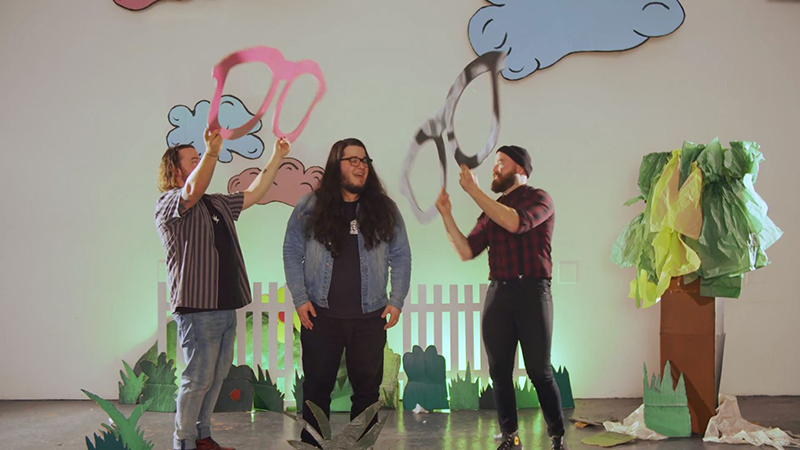 It’s hard to argue with that statement from the band, as from the very off ‘Headache’ rumbles with a raw energy. It is controlled violence, relentless and roaring, and matched with some decidedly brash and cutting lyrics. Okay Dane as a group, despite the powerful rock’n’roll feel of their music, don’t seem to take themselves too seriously, which is wonderfully refreshing.

When asked about the importance of maintaining that resolute fun-ness in everything they do, the band replies: “When we were writing lyrics for this song we wanted it to be as fun as it was cathartic. The idea was crossing the primal rage of the music with really simple and to the point lyrics, we avoided using any kind of metaphor or simile and instead said exactly what we meant. The result was almost a bit childish and petty, but it was a true and un-pretentious expression of frustration. That paired with the “na na na”s in the chorus and the childish imagery in the video helped us to achieve that cross-over.” 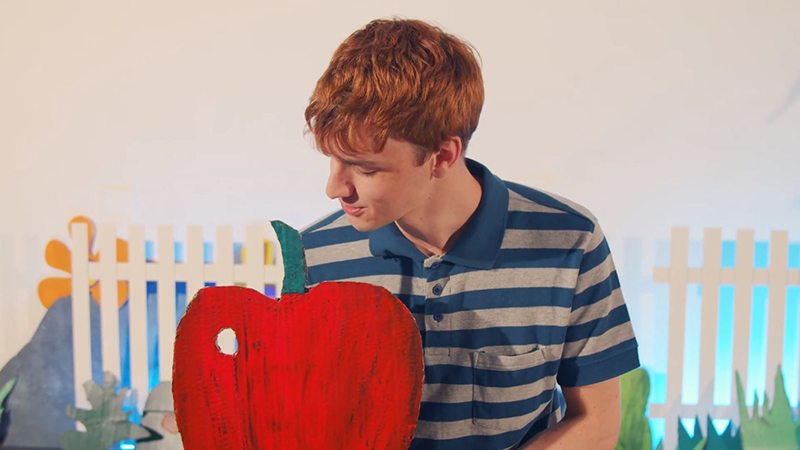 The song’s video begins with the taping of an unassuming Play School-like children’s TV show. But when the production is suddenly halted by the arrival of Okay Dane, the set is gradually taken over and destroyed. We asked the video’s director Nathan Klooger about the coming together of the clip and the importance of capturing Okay Dane’s unique balance of attitude and levity: “It is true that despite their music being hard hitting and at times grungy, the band at its core is quite light-hearted and overall the boys are quite funny and easy-going. I think when coming up with the idea for the video we wanted something in which captured that light-heartedness, but acted with high contrast to the meaning and overall tone of the song.”

”For me, the children’s show environment seemed prefect for it. The concept of the video started as a base idea from the boys, they wanted to be in a “Play School-like” environment and just totally destroy it, which I was completely on board for. Through further discussions, I evolved this idea to carry out a small story, one in which the boys took over the show and caused absolute mayhem. Each scene is designed to be like a segment from a children’s show, like a tea party, teddy time and the dollhouse. Overall I wanted this video to be fun and I think we achieved that.” 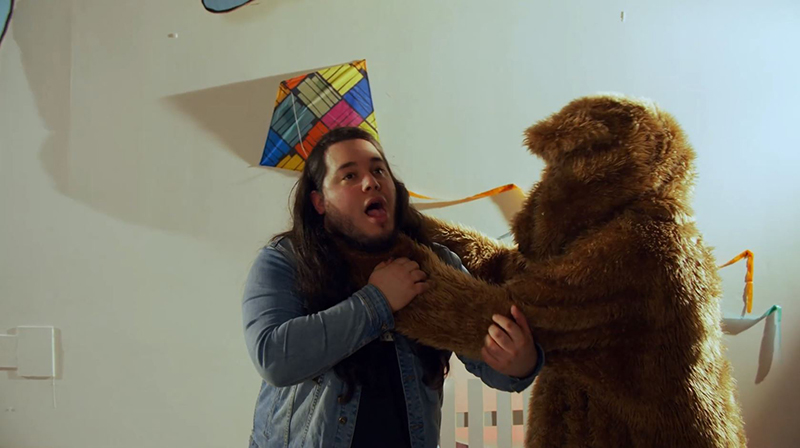 “I think at its core the music the boys make is positively evocative to its listeners really targeting that primal feeling that just makes you want to thrash about, tap your toes and bang your head. With ‘Headache’ it really hit me with those feelings and when the boys said they wanted to physically wreck the show, my heart said all steam ahead! So, when building the sets, basically everything one can see in the background of the video was made to be destroyed.”

The success of an idea like this has to rest on the performances. Creating a set and props for a fictitious children’s TV show is a big step in the process, but when the whole video is built around the destruction of these articles, it really is all about who is tearing them down. Nobody is watching Godzilla for the architecture. As such, it was important for Klooger to let Okay Dane run wild and let their own inherent personalities be the driving force behind the destruction, while also making sure he was getting all the shots he needed to make a great music video. 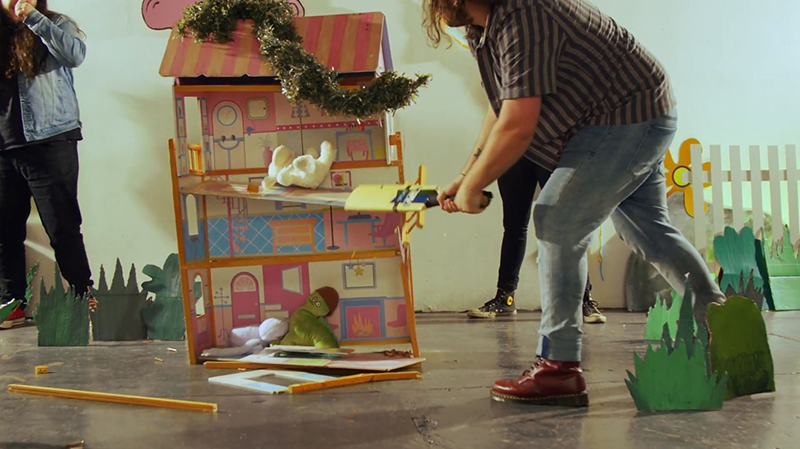 Klooger elaborates: “I wanted to create a space where the boys could just go for it, for the one chance takes in particular I would start off with the idea of the shot and where the action needed to happen, then we’d just roll with it and let the mayhem ensue. Sometimes when shooting a video with one chance takes there’s a risk that you won’t get what you need, but luckily enough the crew I had at my disposal was professional and handy when having to make quick decisions to ensure what we got would not be a waste.”

Here is the official video for ‘Headache’