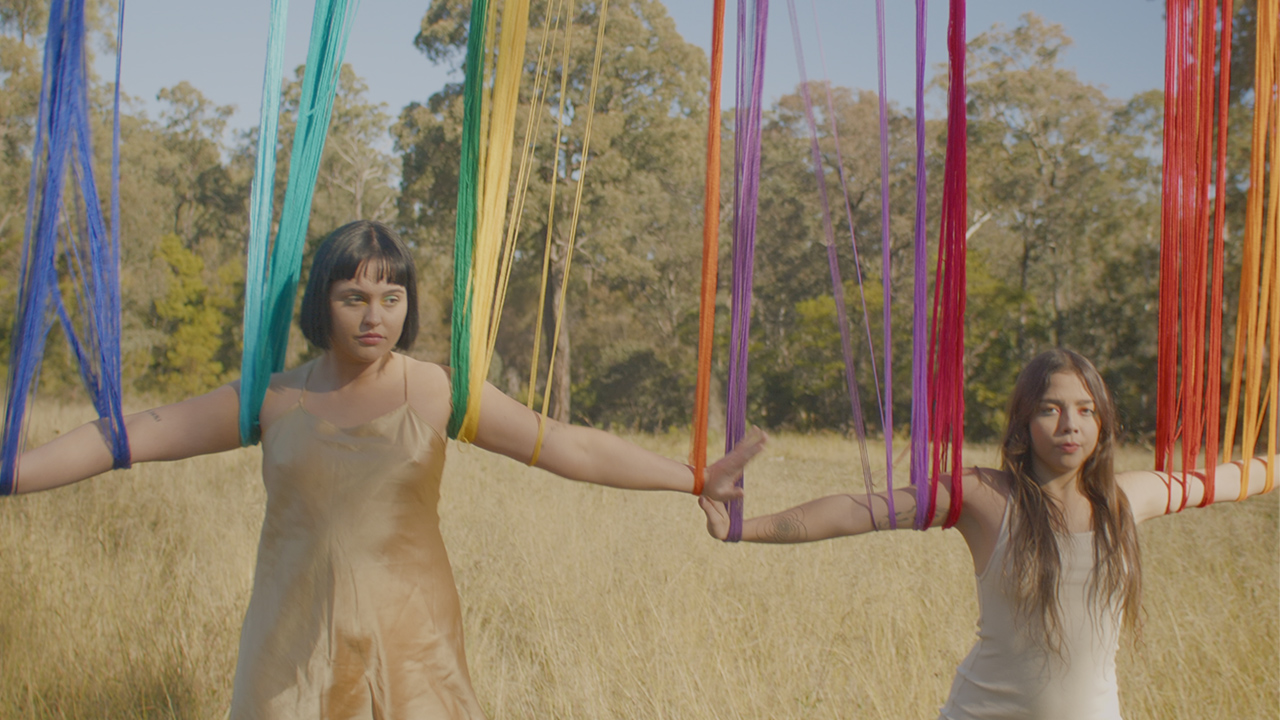 [dropcaps type=’normal’ font_size=’60’ color=’#ed145b’ background_color=” border_color=”]T[/dropcaps]hat exciting flutter of attraction, tentative and tantalising, what a wonderful feeling. A feeling that Sydney-based indie-pop artist GG has managed to capture so perfectly in her new track ‘Midsummer Colour’. A joyous song that comes across as a celebration of delight, naturally uplifting and sightly more upbeat than we may be used to from GG. 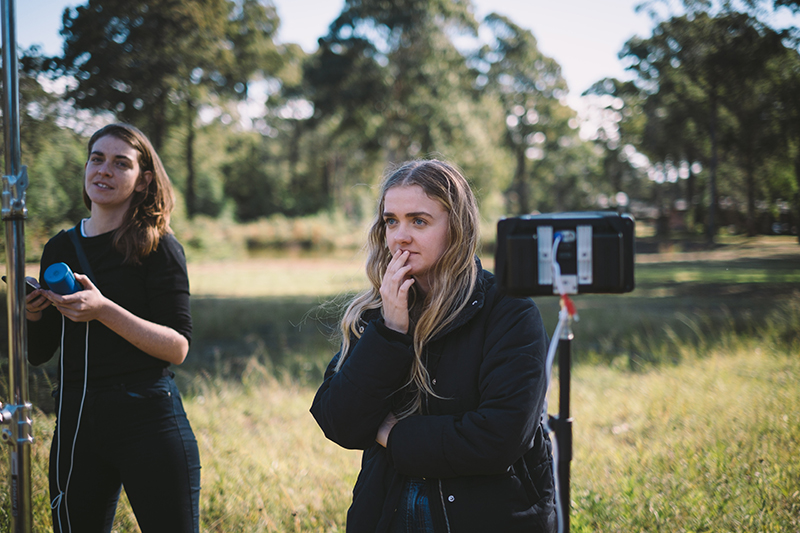 GG explains how this iteration of the song came along through evolution: “It started as a chill, summery demo. There were clean electric guitars, some fruity percussion, soft pads, some wave sound samples. It was quite a bit slower. I chipped away at the demos for about a year before Crook (my co-producer) and I sat down directly to work on it. Programming percussion doesn’t come naturally to me, and when I started with Crook he immediately made the percussion more driving and a bit chaotic. I was unsure in the beginning, because it was a departure from a relaxed sound.”

“As we added other elements the fast-paced, frenetic energy made more sense to me. Crook took what I was expressing lyrically, and matched it to the sound production. Once that driving percussion was in place, the other joyous sounds followed. I went on a Brazilian percussion rampage and collected a bunch of samples. We found some African singing samples, a beat-boxy flute thing, and Crook created some really nice guitar rhythms. It was always a positive, upbeat song, but we really amplified it for the final version.” 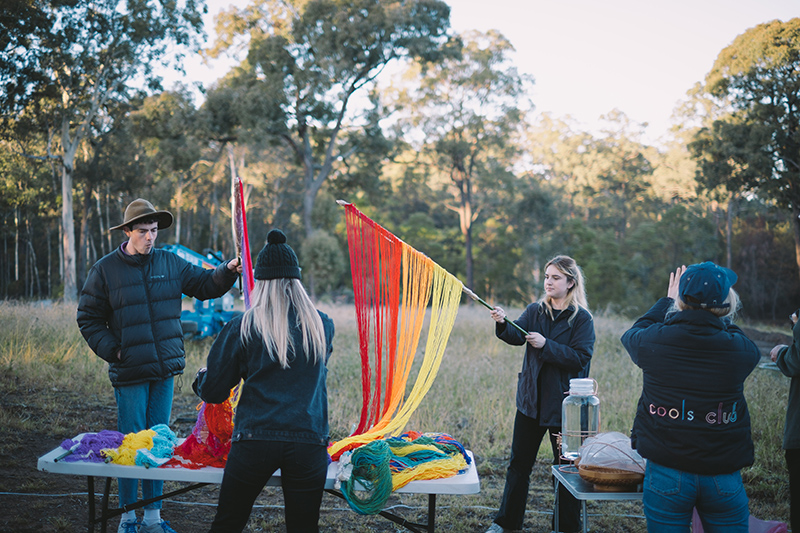 Those bouncy ever-so-slightly chaotic rhythms make for a perfect backdrop for this track, which lyrically explores attraction and the excited trepidation that comes with it. Given this balance that exists in the song, it was very important that when it came to the music video, it was sunny and cheerful, but also carried that deeper meaning.

GG elaborates on the process of conceptualising the video with director Lizzie Dingle: “Whilst I was writing the song, I had a bunch of different visual ideas blu-tacked to my wall. Lizzie and I found each other through a Facebook group, and I was so impressed by her work. I loved the way she framed shots, and what she decided to focus on. Her characters had depth and poise. We are both interested in the symbolism and weight of small, everyday things. We met in person and I gave her my visual inspiration for the song – hyper-colour, 90s, self-assured, bold, textured, glitter, camp. But on the other side is something instinctual, organic and vulnerable. We explored themes of agency and attraction.” 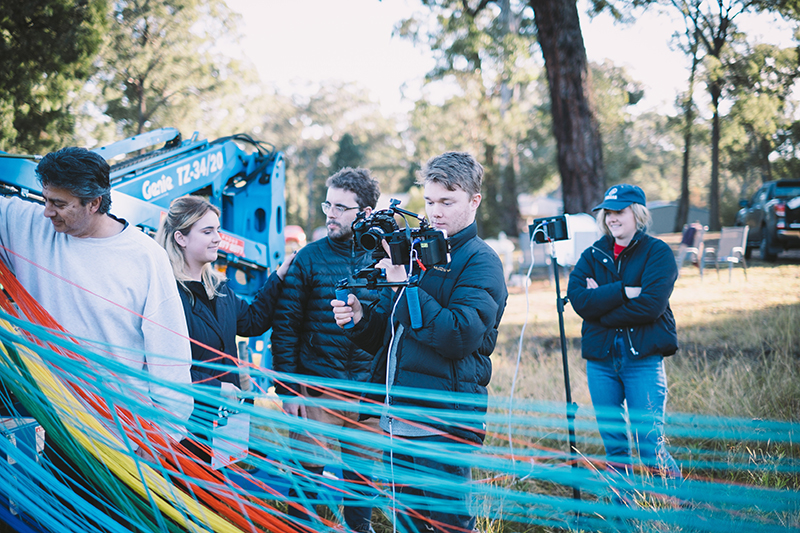 These themes were most important for Lizzie Dingle as well, sharing a lot of the same sentiments on those early concept sessions: “When GG and I first talked about ‘Midsummer Colour’, we began talking about this idea that you don’t often plan or choose who you are attracted to, there’s almost these ‘external forces’ that either push or pull – and the more you react against it the further it pulls you in. In our early days of working together, we sent each other a bunch of music videos we each liked, and then we discussed what we liked about them. One that I sent was ‘Strawberry Fields’ by The Beatles. A great video! In it, there’s a piano that’s tied to a tree and the strings are multi-coloured and what I like a lot about that video there is no explanation, no justification, they are just there. I loved this idea of a super bright colourful unnatural force set in a really natural environment. It plays perfectly with the brightness and energy of GG’s music.”

The video focuses on two women in a grassy field, their limbs suspended by swathes of brightly coloured yarn. Through interpretive choreography, the two express the different stages of attraction and connection, beginning as nervous and hesitant before becoming completely engulfed in each other as their strings wind together to form one big rainbow clump. It’s a very interesting depiction of these feelings, made so much more intriguing by the use of the strings, as GG describes: “We knew that the strings had to be bright, and that the choreography had to be playful but also sincere. Lizzie found Tanika Layt and Makayla Loves, our choreographers/dancers, and they were really able to communicate the range of emotions in the song; intrigue, trepidation, playfulness and excitement.” 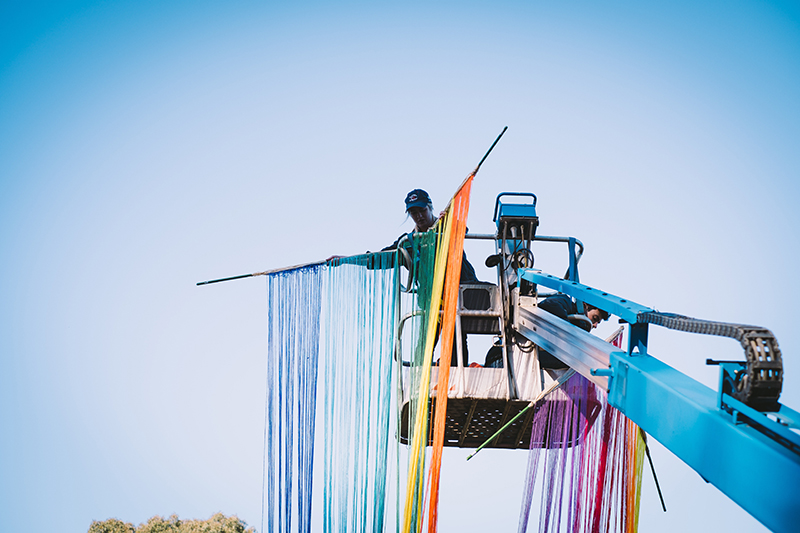 We never see the source of the strings, as Dingle said earlier, there was no explanation of this phenomenon necessary. However, we couldn’t help but wonder about the actual practicalities of filming with the strings, to which Dingle replied: “I wanted the strings to feel endless, that when the camera floats past the dancers the strings never stop. When I pitched this idea to Emily Jansz, my wonderful production designer, I had originally thought we would just throw the string around a c-stand and all would be good. She began creating little prototypes to see how movement and height on strings could actually work.”

“It soon became clear that my idea was not going to work. We then thought having people on ladders would possibly work, however, when we went on the location scout, we were talking about it to her dad – who said that the only way we could have that height and flexibility of movement was using a cherry picker. So, in the end we had two people in the cherry picker holding two poles each, one for each of the dancers’ arms. This allowed the dancers to move freely without the strings flopping everywhere.” 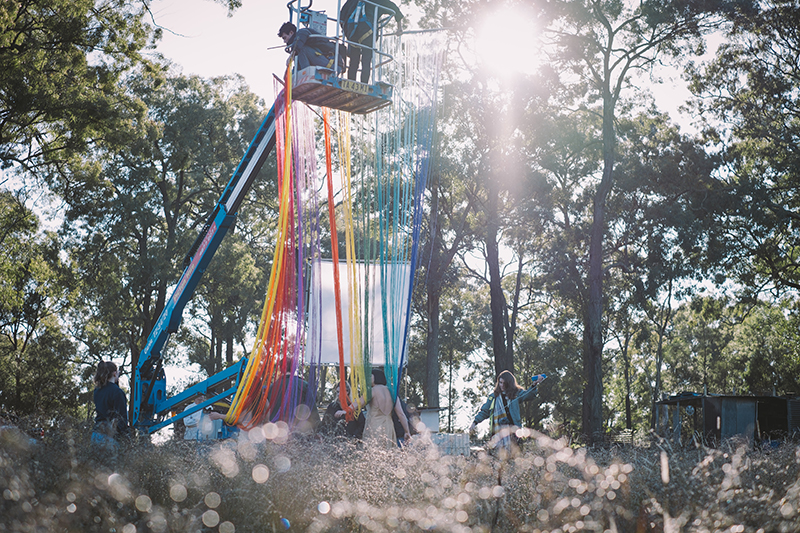 Lizzie Dingle and her DOP Zac Hardaker use cinematography in such an intimate way. Tight shots of the two dancers only reveal parts of them at any time, engaging the audience in the closeness and affection that the subjects are experiencing. When asked about this approach, Dingle replies: “This video to me is all about the physical reactions to attraction and intimacy. I really wanted to draw the audience close, to show how every fibre of their bodies are reactive. Whilst it was really important to draw the audience in, I also didn’t want to lose the location. My cinematographer Zac Hardaker and I made sure that even though we are so close and focus on really small moments, you also get the sense of the natural world, which was really important to the concept of the video.”

Here is the official video for ‘Midsummer Colour’