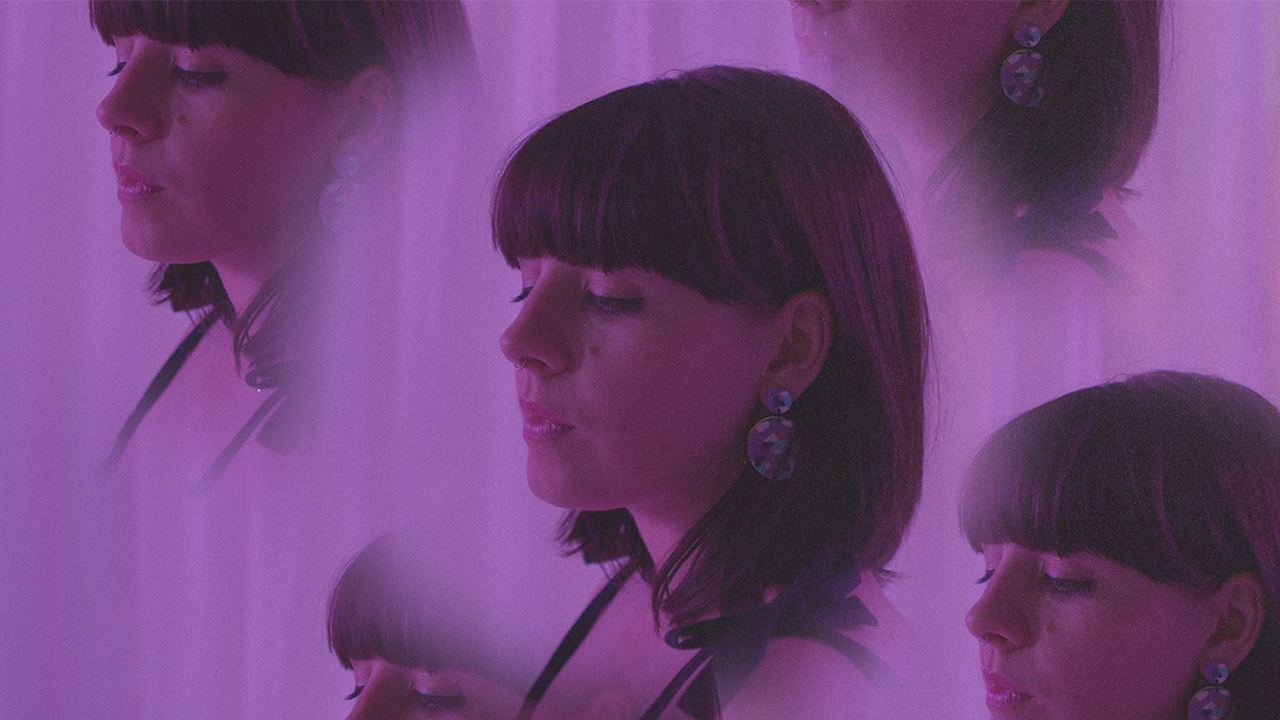 There’s only so many times you can talk about how Perth is batting above it’s average when it comes to pumping out great music before the argument eats itself, but it’s absolutely true. Maybe it’s the isolation that makes Perth this buzzing hive of creativity, a community rich with that kind of supportive competition that hones craft and creates gold. Maybe it’s the amount of dedication it requires to take your music out of Perth to the rest of Australia that means we’re seeing the cream of the crop on the reg. All speculation and pontification aside, whatever’s happening is working. And self-described “indie rock angel” Tanaya Harper is absolutely proof of that. 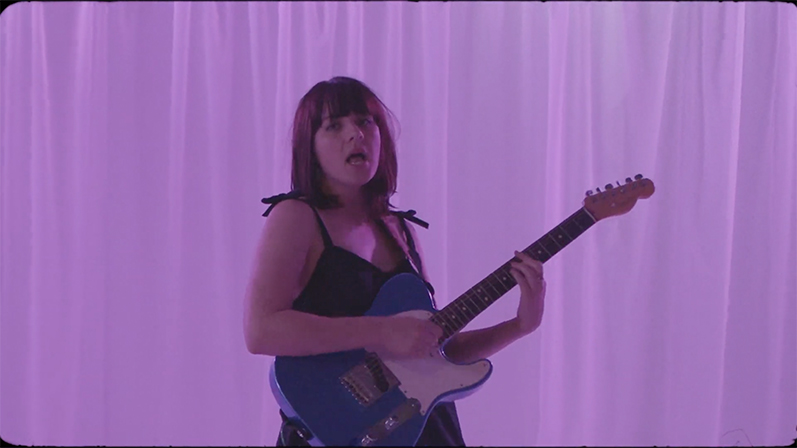 After originally bubbling to the surface with four-piece group Bells Rapids, Harper soon found herself amidst a solo project, performing thoughtful intimate jangly pop built around rich poetic lyrics. However, according to Harper, it was perhaps a longing for the band life that spurred on the creation of ‘Crash Pad’: “I wrote it a few years after Bells Rapids had ended and by that point, I was really craving writing with a band again, so maybe I was subconsciously planning for another band? I guess it was an organic 180 degree turn around, headed back to where I’d been before writing my solo EP Some Kinds. So yes, this song is a sign of new, exciting things to come! Crash Pad is the first of three singles before the release of my second EP ‘Slow Motion Breakup’ which was all recorded with my full band – Sara McPherson (Bass), Luke Del Fante (Drums) and Beau Torrance (Lead Guitar). I’m so happy with the final product and I’m very excited to play these songs live because we have so much fun together – we’re a good team and they’re all incredible musicians.” 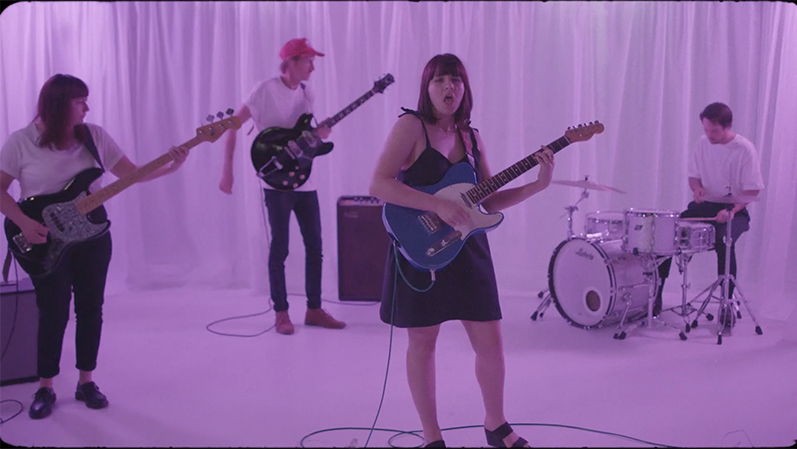 There is a new energy to ‘Crash Pad’ that was not previously as noticeable in Tanaya Harper’s music. Along with the inherent dynamic a four-piece band will bring, there is this constant rising temperature throughout the song that finally unleashes in the final section, thumping with vitality and fire. The performance of the song feels so important to the track itself and something that director Matt Pitcher was intent on maintaining when it came to creating a video for the track: “From the start we wanted to make a music clip showing the entire band. With this in mind, I decided to strip it right back so that it was shot entirely in a studio. I wanted it to feel as though they were performing in front of an audience, almost like a live appearance on a late night show in the 70’s or 80’s. Ultimately we didn’t want a narrative to distract from the music, so we found a simple and unique approach and rolled with it.”

The video within this format, doesn’t rely too heavily on the edit. For the most part compiled of drawn out shots of the performance, allowing the audience to really sit with Harper and the band and absorb the energy that exists between them, without having their attention stolen by an overactive cut. “When you’re watching a live show, you don’t really have a choice other than watching the performance.” Says Pitcher, “I felt this particular song lent itself to longer drawn out shots focusing more on the music, rather than constantly cutting. Tanaya and the band were so tight that I personally found it mesmerising watching them play. I see so many clips with ‘active’ editing and I found myself questioning whether it was the music and/or content I find engaging or just the constantly changing visual stimuli.” 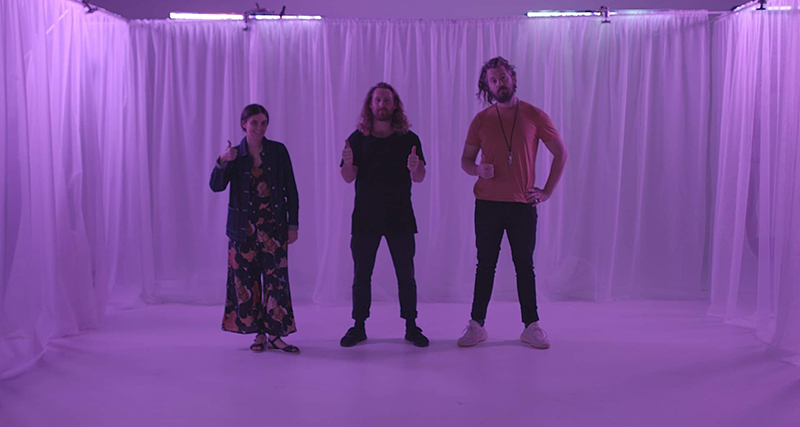 Pritcher adds some texture to the format through a soft pinky purple hazy aesthetic that permeates the video, along with some expressive glimpses of shots of Super 8 film and the occasional use of an image slightly out of the ordinary, a performance happening behind a thin veil, or Harper peering out through a gap between curtains. These additions bring a certain dreaminess or even very mild surrealism to the video. When asked about the importance of this sort of approach to her videos, Harper replies: “First and foremost, I wanted the full band in the video because this is my very first single that features a band. It’s like a ‘Hello! This is what I’m doing now!’ video. Crash Pad wouldn’t sound the way it does without the three of them, so it’s really important to have Beau, Luke and Sara in the video with me.”

“As far as dreaminess goes, well, I’m not even sure that I mean to make anything very dreamy at all, haha! Maybe I have a core aesthetic preference that I’m not even aware of? All jokes aside – pink and purple are my favourite colours and that was the most important artistic choice to me. The dreaminess that Matt has communicated in the video may relate directly back to discussions we had about what the song is about: when there’s a disconnect between two people when they aren’t seeing eye-to-eye, when there’s this space between them that they just can’t seem to mend.” 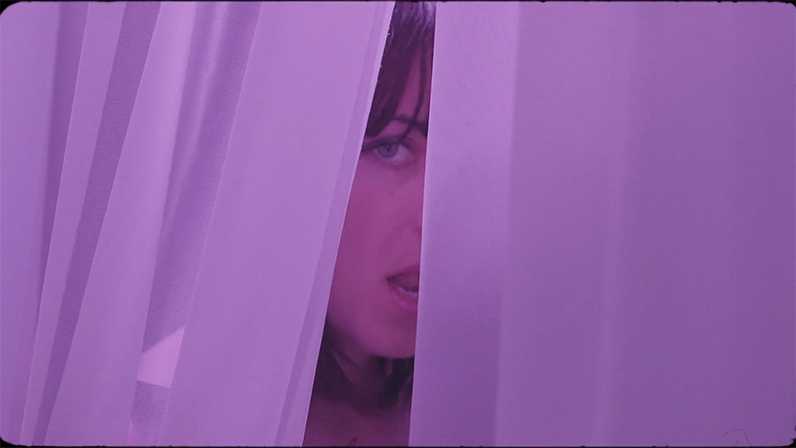 Pitcher discusses the plan to bring that something a little extra to the format: “I think the dreamy quality of the music speaks for itself; we really wanted to keep that element of surrealism throughout. When it comes to the cutaways, yeah it’s a performance video, though the song is really personal to Tanaya. I wanted to show this by isolating her and the audience, almost like they’re dealing with each other one on one at times, adding an element of vulnerability. The super 8 parts were almost like behind the scenes grabs, moments of honesty and personality to break up the band shots and removing the viewer from the ‘stage’.  These elements add some depth and dimension to the performance, so it’s not just a band playing to a screen.”

Here is the official video for ‘Crash Pad‘