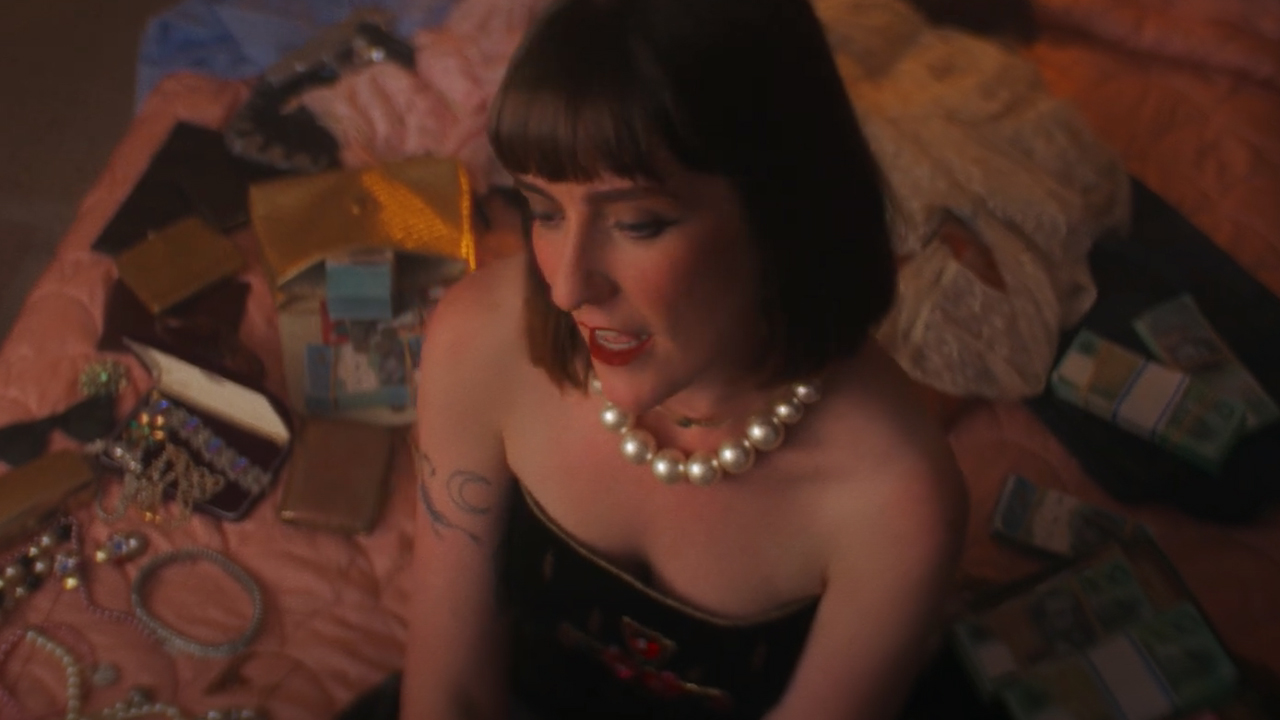 [dropcaps type=’normal’ font_size=’60’ color=’#ed145b’ background_color=” border_color=”]F[/dropcaps]rom the first shot of Baby Velvet’s new music video “Call Me”, we’re thrust into an intimate world where characters do not sing at the camera, they sing for themselves. We see a bartender (played by Francesca Waters) polishing a glass and whimsically serenading not the camera, but a bar-fly, a creative choice which serves to curate an interpersonal and nostalgic feeling that reminds us of old-timey musicals and creates the sense of an intimate, cinematic and musical time. 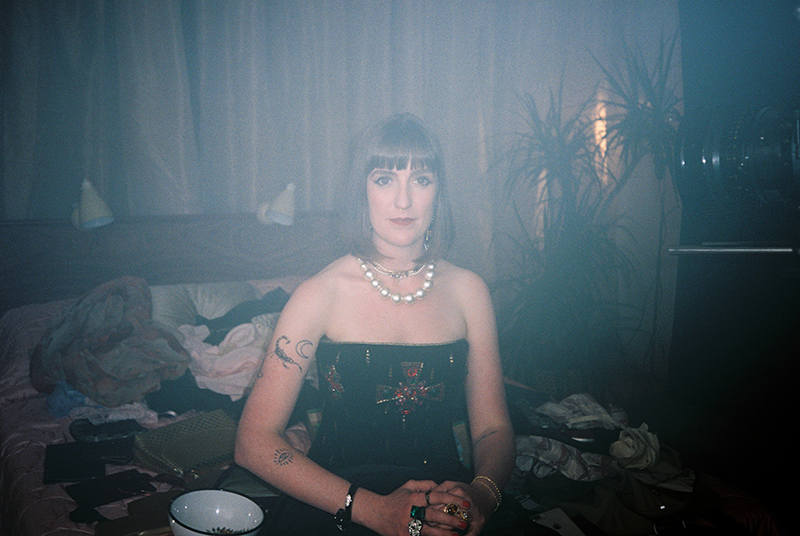 Artist Hannah Croft (Baby Velvet) speaks to the central themes behind the song:

“One thing I have always struggled with is the fact that if you have a mobile phone, it is expected that you must communicate regardless of if you want to. I think about growing up with a home phone, if you weren’t home the person would leave a message and you could get back to them whenever you wanted. With mobile phones/text messages/emails I find it crazy that if you contact me, I must answer! The song is about having long stretches of depression and a general loss of identity and how sometimes you must tap in and out of life, choosing when you can come back in / taking a mental health break if you need it. This is a song about losing it all, the job/the relationship/the sense of self but building it back up and then when I am ready, coming back into the world and answering my phone.” 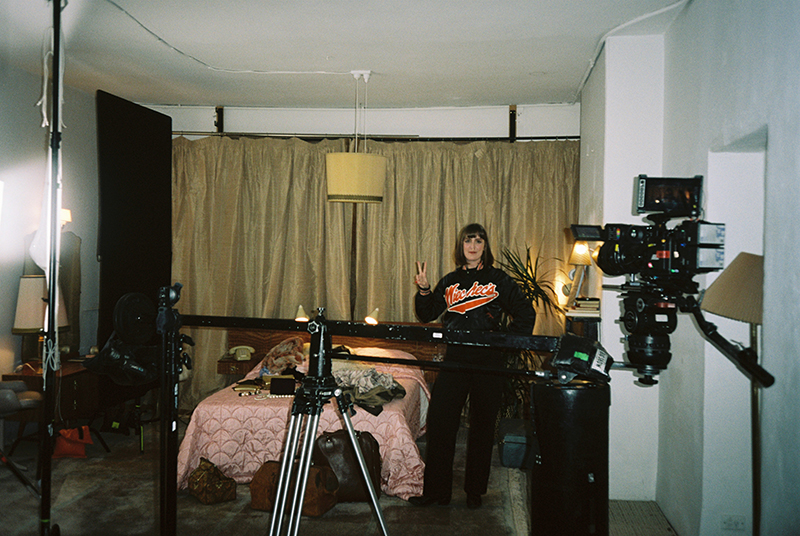 It seems the perfect choice then, to express themes of liberation and self care through a crime-filled road trip adventure with pals. Directors Caity Moloney & Tom Mannion write:

“…what we wanted to convey in the clip is the feeling of ditching it all, saying fuck it and taking off. I think it’s something we all experience and dream of at times – especially at the moment… We had the best time working on this with Hannah. The three of us really worked as a lil team throughout. Process-wise Hannah and our producer Tobias from Kewl had a general vibe and a few ideas they thought would work well for the clip, and we then fleshed that out into a full story that flowed to the track. Hannah was keen on the inclusion of some badass older women, but was also conscious of needing to be prominent in her debut –  so we came up with a narrative we felt achieved all of those things.” 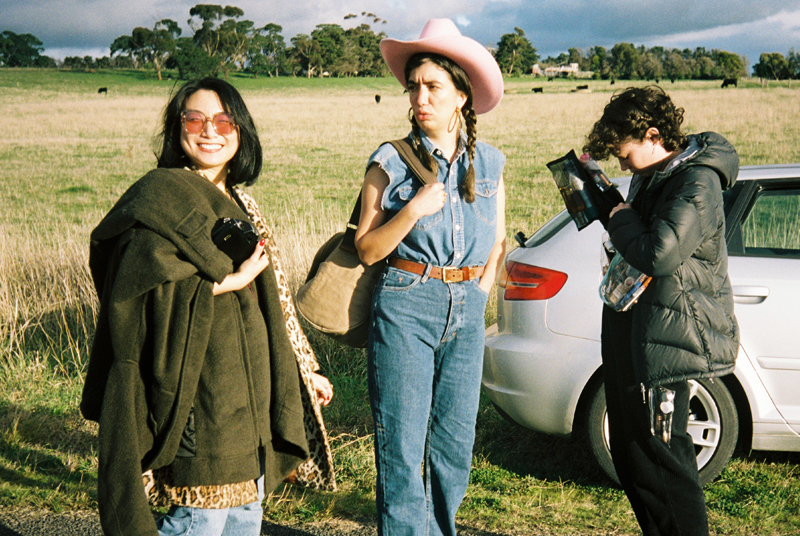 It is clear there is a lot of love and attention devoted to this story, as while on paper the narrative seems quite straightforward: “Women engage in a liberating crime-spree”, Moloney and Mannion were careful to not make crime the main focus of the video, instead opting to center the narrative on the relationship between our protagonists:

“Crime is definitely not the focus, but it’s also not at all hidden. Pretty early on we see Maggie with a gun and a bag of money, we also see the three of them running to the car with masks on, Hannah on the bed surrounded by cash and jewels. So it’s in there but it wasn’t emotionally the thing we were most interested in, we wanted to focus on the friendship developing between the three women and the freedom they feel together.” 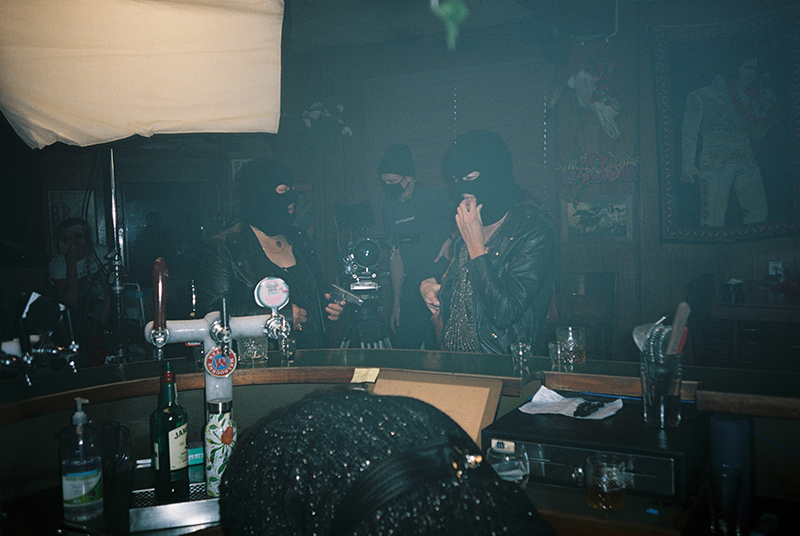 Director of Photography Marcus Cropp creates a masterful aesthetic that is undoubtedly cinematic. It is clear how much careful focus went into each shot, the camera moves when it has too, framing itself clearly and cleanly. Beautiful sweeping Victorian landscapes and perfectly subtle slow-zoom outs all give the video a subtle energy that does not distract from the performance or narrative. Even what could be described as a “clutter” on the bed around 1:50 is framed ingeniously: Tilting the camera up to envelop Baby Velvet in a sort of halo of decadence.

Moloney and Mannion add on some well deserved praise, and speak to the collaborative process behind the clips’ visuals:

“We’re super grateful to Marcus Cropp, our DP, for making it look so tasty – we’ve worked with Marcus a few times and have a great working style. We told Marcus we wanted anamorphic and zooms but couldn’t afford most anamorphic zoom lenses. Marcus found a beautiful Cooke Varotal 36-200 with a technovision anamorphic rear element, which is quite a funky lens so gives the clip an interesting aesthetic. That was combined with Marcus’ ARRI Alexa LF, a little jib and slider but most importantly Marcus and his team’s beautiful work and constant hustle to constantly improve the quality of every single shot. We also got to play with some other fun kit when shooting the car on the trailer with James Thompson.” 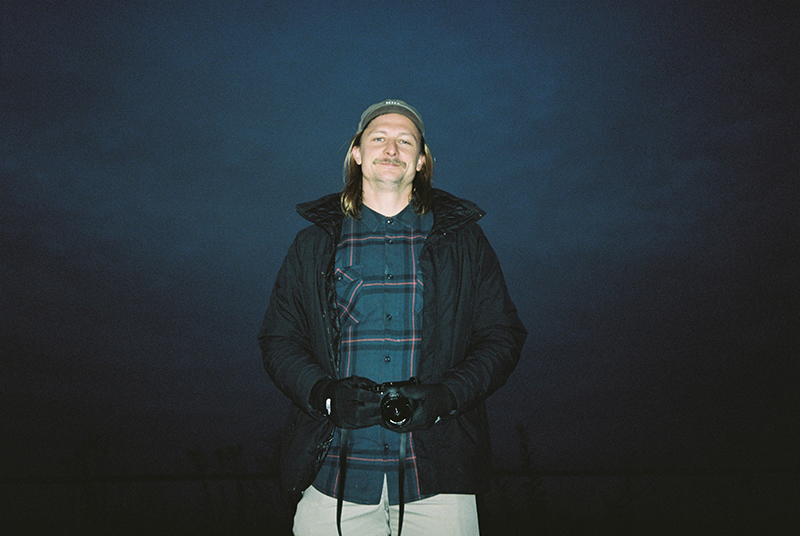 Even though the video was shot in Beac, a small salt-lake town by western Victoria, the film feels plucked right out of a 1960’s US road-trip movie. Perhaps it’s the characters polishing glasses behind a neon bar consoling patrons, driving convertibles through countryside or maybe it’s the actual cowboy costume worn by Leyla Varela around 1:30 (though it is almost certainly the latter). Interestingly, this homage to road trip cinema was not originally intended.

“We weren’t trying to make it American at all, and a lot of the environments are actually pretty classic Victorian countryside. However we had some dramas with our first vehicle so ended up shooting with the mustang (which ended up being a blessing as it looks amazing imo), so as a result the whole clip does have a more American feel than maybe what we were originally envisioning. Also, obviously a lot of great road movies are set in America so in referencing them that probably came through a bit.” 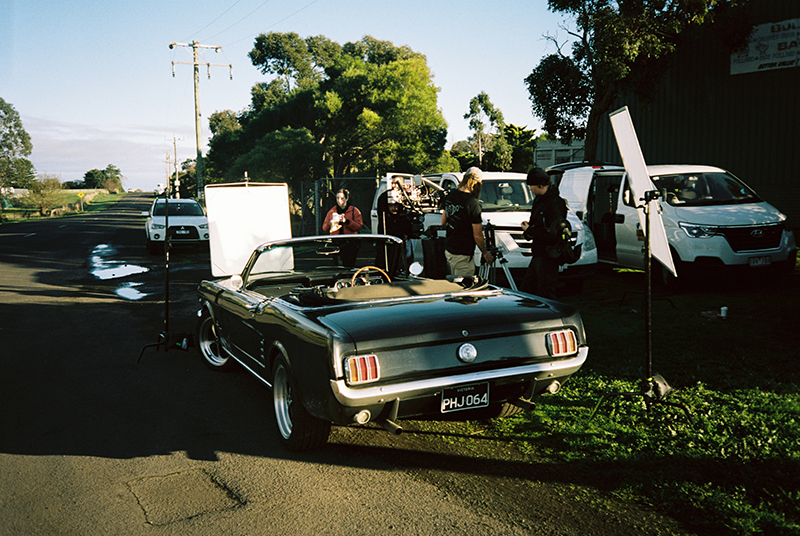 One would think that such a polished video would have undergone an equally smooth production process, however this was not the case. Moloney and Mannion explain the wild shooting problems they faced during the shoot.

“Our original shoot car broke down 10 minutes from set, 2 hours out of Melbourne, 45 minutes after we were supposed to start shooting. So we called producer Tobias who rented the mustang and drove it 2 hours to location so we could start – meanwhile eating up our shoot hours eating up the delicious breakfast at The Farmer’s Arms pub in Beeac (5 stars). We also had a whole bunch of other smaller dramas but I think Marcus, our DP, put it pretty well when he said on set something along the lines of ‘I can’t see any problem our little team couldn’t solve’. It really was one of the wildest shoots we’ve worked on, but strangely all of the issues we had to solve never impacted the quality of the clip, if anything having to overcome so much on set brought our crew together with such strength that everyone throughout really kept hustling as hard as possible to make it as great as possible.” 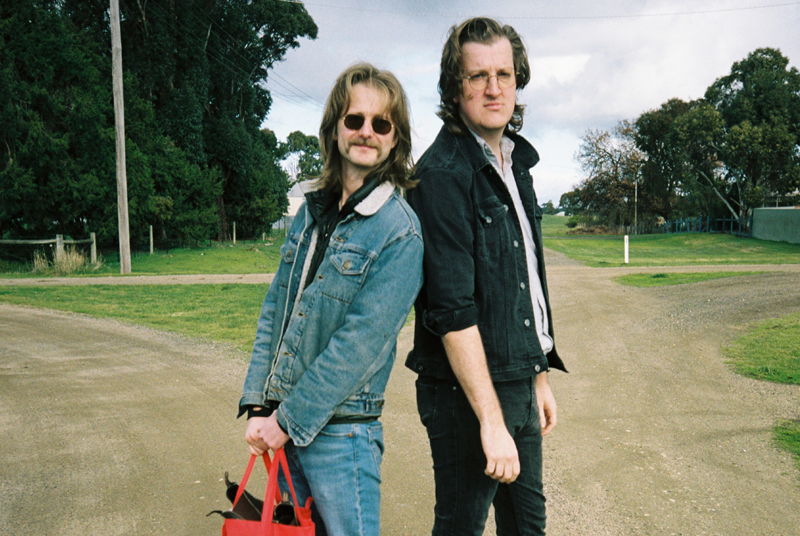 When the final product is put in context with its surprisingly frenzied production process, it’s baffling that the clip turned out so well. All in all, the video’s quality is a testament to the talent of its crew: and their ability to stay calm and find the fun of production, even within stressful conditions.

Collaboration is the key theme here, so notable shout outs must go to incredible stylist Yvonne Moxham, who is the one responsible for that incredible cowboy hat and fascinatingly, managed to mostly work on the project from a completely separate state. It is clear fashion and dress is a central theme to the clip, and Moxham did excellently, curating dress-styles that not only portray but give character to our protagonists, be it sophisticated and wise in a shiny jewel deep green covered top. Or Baby Velvets transition from prim and proper, in a vest and lace shirt to emblazoned, liberated and confident sporting leopard print and gold jewelry. It is obvious a stylist has done well when you can tell exactly who a character is by what they’re wearing.

“Yvonne was amazing to work with! Of course having a stylist makes the clip way better. Yvonne and Hannah have worked together quite a bit, so Yvonne had a great understanding of how to merge Baby Velvet’s aesthetic with the overall look we wanted from the clip. And massive props because she did it mostly from lockdown in Sydney, sending us all the wardrobe for the two days away and then luckily being able to join us for the final day so we could enjoy some of her amazing work in person. 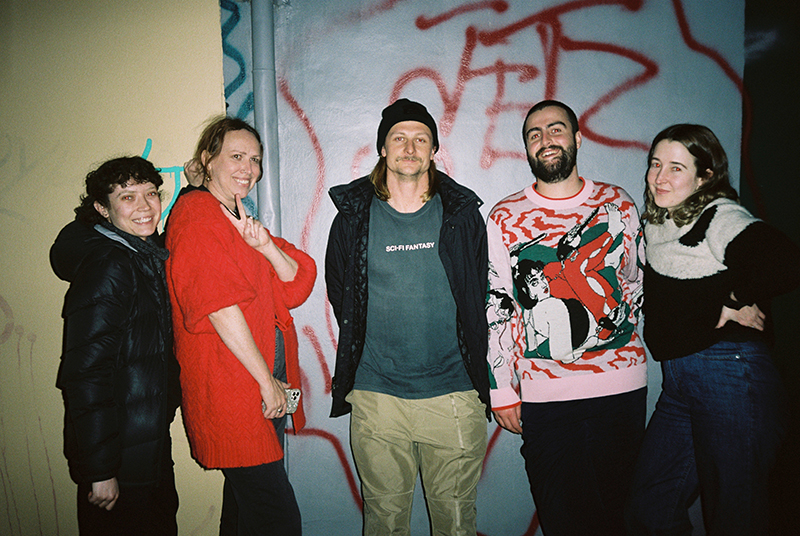 Hannah adds on, speaking to her relationship with Yvonne: “I am obsessed with my stylist Yvonne Moxham (@goldtonevintage). I met her years ago when we were both working a VIVID event in Sydney, she had fluoro gold shoes and gold earrings and I was hooked. She is my fashion inspiration, a true fashion creative and I think my soulmate in how our brains work. I love working with Yvonne because we both love how clothing can tell the journey of a person and in a way are another character in anything we make together.”

All in all, Call me is an adventure in friendship and escapism: a masterpiece in collaborative filmmaking and above all else: A good time. Moloney and Mannion conclude:

“I think we mostly want people to have fun watching it, and to feel like they’re in some way escaping too. We also love friendship, and wanna be doing cool stuff with our mates until we’re much older, so I guess we wanted people to think about that as well.”

Here is the official video for ‘Call Me’