amuel Gaskin draws from varied influences to develop a brilliantly complete musical experience in his song, RECKŌNING. Gaskin pulls elements from Maori and Aboriginal heritage, stressing the importance of lineage whether past, present or future, and places their themes and movements centre stage. The video itself is presented with no small amount of style and a taste of the modern, forming a complete visual and aural performance. 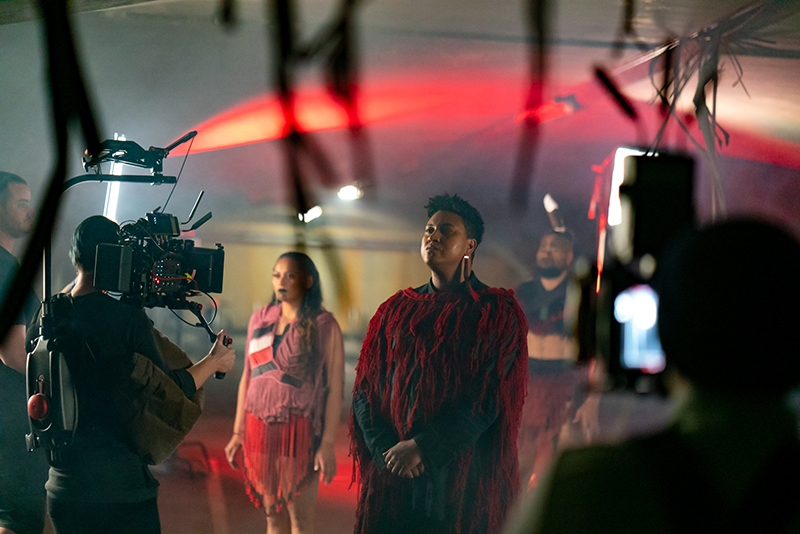 Gaskin, and co-director Johnny Hamilton, aimed to mesh concepts from their ancestry and display them at the forefront of the clip. They skillfully manage aspects from both the traditional elements of their ancestries combined with characteristics of modern music. Both creators wanted the connection between the Maori and Aboriginal peoples to be apparent throughout the clip, symbolising this with the ‘hongi’ or sharing of breath and life force.

“I came up with the creative concept by really listening to and feeling the mana (spirit) coming through the lyrics and sounds of the song. This song takes its title from our award-winning live show RECKŌNING Te Waiata Paihere Wairua (the sound of woven souls). The essence of which is the intertwining of our first peoples of Aotearoa, New Zealand and Land of the Dreamtime, Australia.” 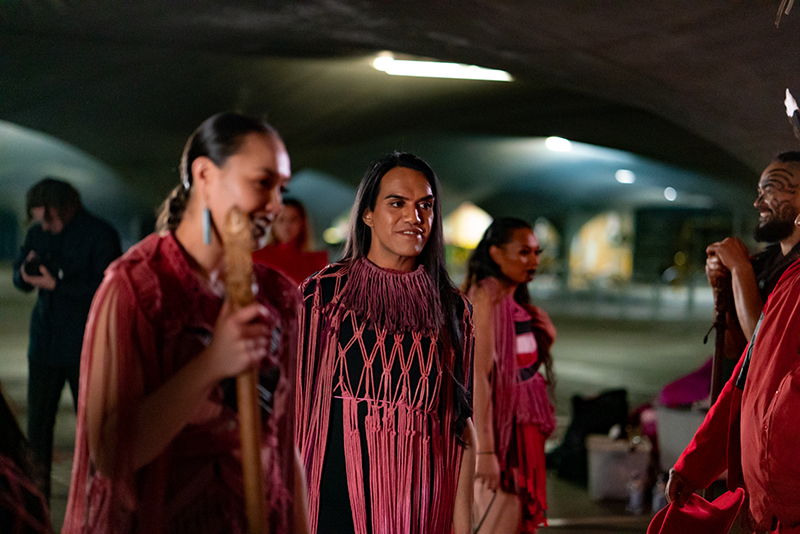 The costuming throughout the shoot references nature, the weaving of cultures suggested by the use of macrame and signature elements of contemporary woven neck pieces by Arawa designs. The colour palette of reds, blacks and whites is immediately identifiable as Maori with the pinks, oranges and yellows of the Australian landscape, representing the aboriginal people. Gaskin added to this, impressing how important it was to explore and foster a connection to ancestry.

“RECKŌNING has always been about showcasing the magic and power we as Indigenous people hold in our blood lines. My ultimate goal throughout the whole creative process was to showcase the beauty, power and wairua (Spirit) of every single performer on that screen. The collective power we all share as humans, creators and warriors. First and foremost, the Anchor is always Love. A love for ourselves, a love for our culture and a love for the strength and tenacity our people have always held.” 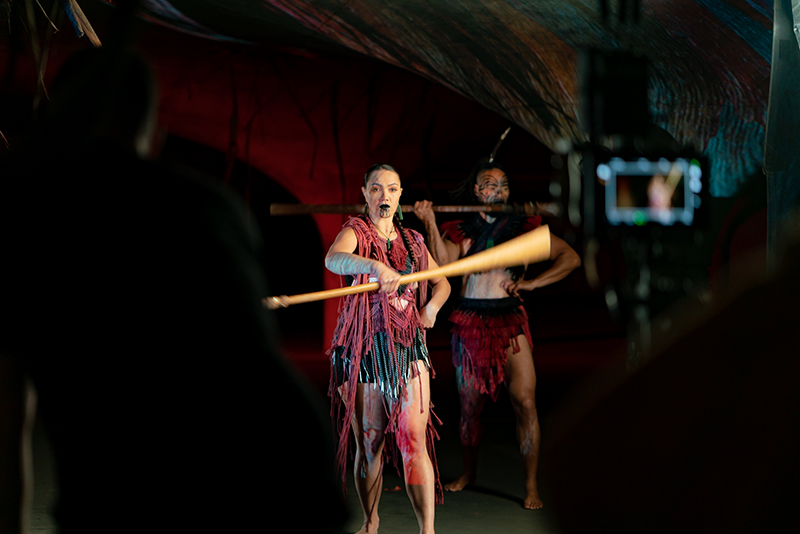 The clip was filmed on an Arri Amira in an underground carpark at a Melbourne University underground parking lot (the carpark itself being something of an iconic location, appearing in films such as Mad Max: Beyond Thunderdome). Gaskin and Hamilton transform it into a wondrous space while also referencing the harmonious roots of the structure’s design. There is tinted smoke and soft red hues in the background, part of the deliberately chosen colour palette that blends the traditional colours of both tribes, as they perform on a set designed with traditional land in mind.

“We loved the vast space and beautiful shapes of the arches throughout and the thick pillars suggesting a Forest canopy with giant old tree trunks. I wanted the set to look like a futuristic landscape using snow gum bark images projected onto the ceiling, low lying fog, large concrete pillars and bark strung up to emanate the look and feel of gum trees. The very structure of this particular car park is shaped around the protection of the trees growing above, so even its gothic industrial interior is actually shaped in respect of the nature above. The raised plinth is a stylised koru shape that is intrinsic in Maori symbolism. Powerfully referenced in Maori carving, jewellery and design, the koru, is based on the unfurled frond of the silver fern and symbolises new life, growth, strength and peace. Another key element of the set for me is the projected image of one of many of Sam’s incredible ancestors, Hitiri Paerata. We really wanted to convey the feeling Sam has of his presence, support and guidance in everything that he does.” 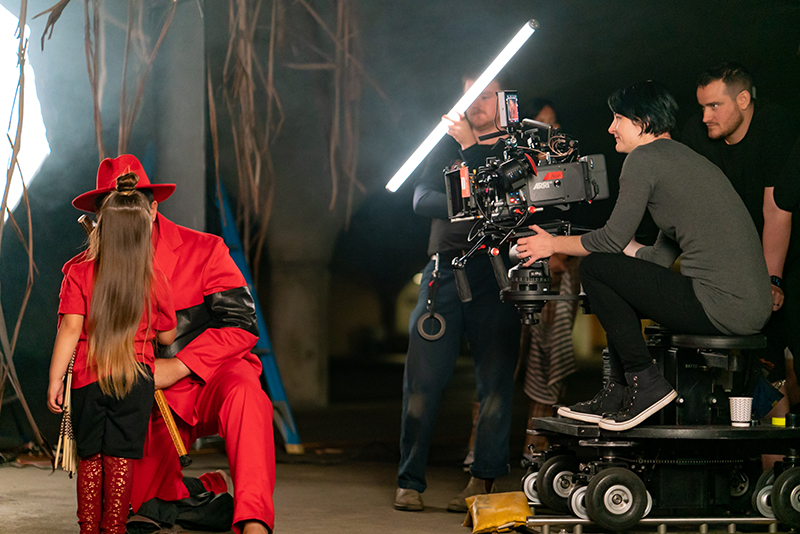 Gaskin worked with traditional sound healers for the first time while writing the song. The role of a sound healer is usually to use instruments such as singing bowls to clear stuck or stubborn energy. Gaskin and his team, including Melbourne DJ Liz Millar, weave elements of this through the largely pop genre song while also balancing the traditional music of their tribes.

“What got me really interested in sound healing, was attending various sound healing sessions in different places like Bali and places around Melbourne. I’m so naturally drawn to sound. I’ve always loved music and dancing and the sounds that are born from nature. Being introduced to the power of sound healing was magic. Liz Millar, who is a co-writer on the song, is an iconic Melbourne DJ turned sound healer. She is a dear friend of mine and was so keen to be involved. The next release coming out which will be myself featuring “The Merindas” has Katie Underwood as a co-writer, who is a former “Pop Star” turned sound healer. This project has connected so many awesome humans and it makes my heart smile.” 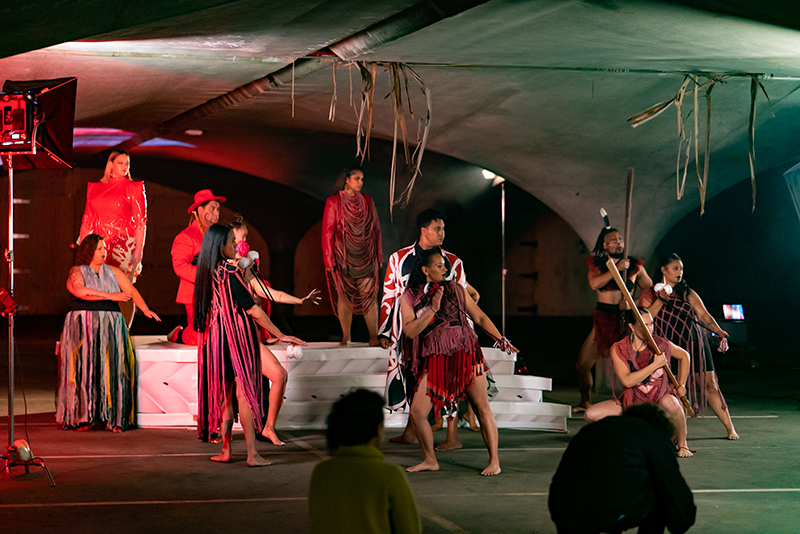 It’s not the only example of an impeccable combination of the traditional with the modern. Gaskin continues to pursue the amalgam through the movements of the performers. The strength in their gestures is tangible even through the screen.

“The movement you see in the clip is a fusion of both cultural and contemporary. It was very important to me that we were able to blend the two effortlessly. I have a commercial dance background but relied heavily on my amazing Kapa Haka performers for advice and guidance on anything I was unsure of culturally when blending the two together. A point to clarify is that these beautiful people are not just “dancers” doing movements. They are Whānau and Mob from many different tribes. I feel like we were able to easily represent what makes each of us unique. This is purely because the wairua we each hold is so strong it shines through. Anybody connected to their own ancestry, whatever that may be, will be able to feel it.” 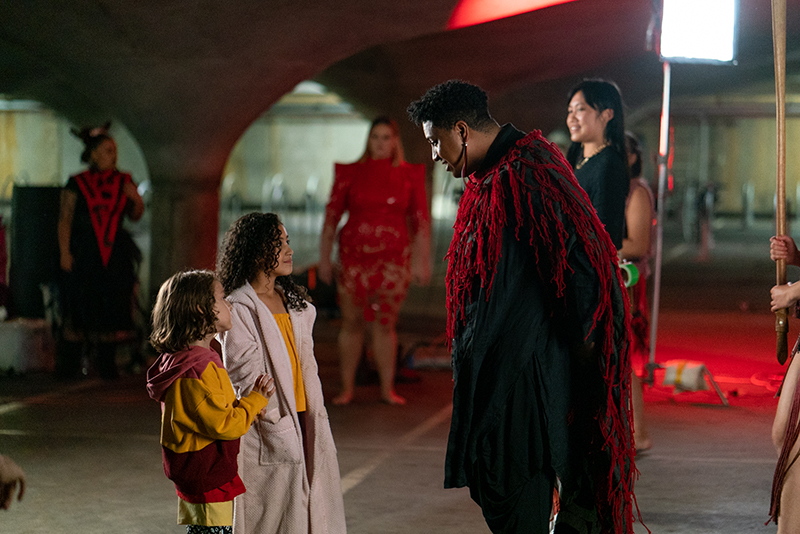 Gaskin and Hamilton place a huge emphasis on an entire bloodline, from the heritage of their ancestors to the potential of their youth. Their children appear throughout the clip, often in focus and supported by those around them.

“This is unbelievably important because the children are always our future and the ones who will change the world. I have four generations represented; my mother who is in the opening shot then both our beautiful children Maxwel and Raelah, who you will see rocking it with me and also closing the clip with their hongi. The most poignant representation is the projection of my Great-Great-Great Grandfather Hitiri Te Paerata who was one of the only Māori who survived the battle or Orākau with his sister Ahumai, where almost my whole tribe was wiped out by the colonisers. I am able to be who I am and do what I do because of all those who have come before me.”

Samuel Gaskin’s RECKŌNING, directed by Gaskin and Johnny Hamilton, is a beautiful clip full of powerful performances combining elements of their culture and ancestry with modern and contemporary foundations. They bring to life a music video that is visually interesting, despite its relative simplicity, and showcases the power in heritage and ancestry.

Here is the official video for RECKŌNING