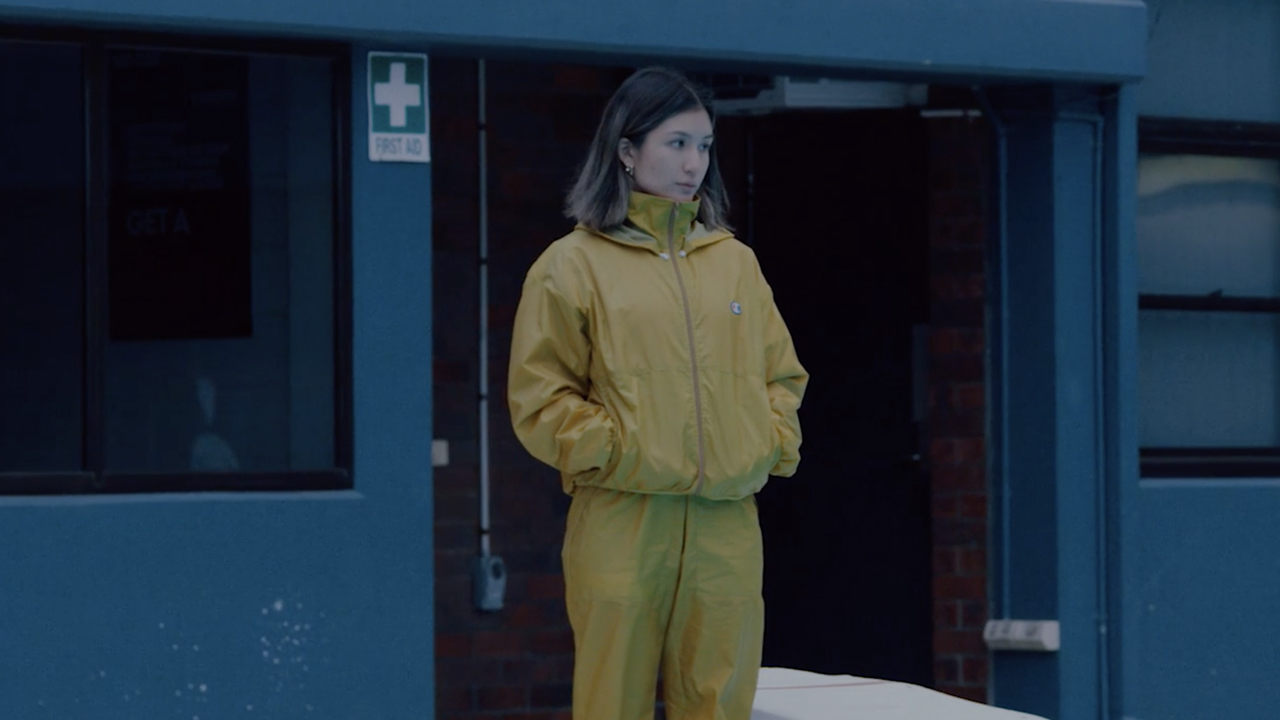 [dropcaps type=’normal’ font_size=’60’ color=’#ed145b’ background_color=” border_color=”]B[/dropcaps]all Park Music have broken ground on a new era. For the Brisbane band, it’s a fresh aesthetic that conjures a familiar feeling, one that’s more raw than manufactured, more honest than contrived. The new single ‘Day & Age’ dropped in June this year and shows a stripped back side of the band.

It’s the second single of Ball Park Music’s sixth studio album, set to be released later this year. The track’s echoed dream-like vocals are drawn out over a bouncy riff that slides on and off key. The result is both upbeat and disconcerting, something Ball Park Music have shown a knack for executing over the years. Band frontman Sam Cormack combines the morbid with the mundane in an odd retelling of past dreams. It’s a hazy indie-pop affair that reflects on what these dreams could really mean. 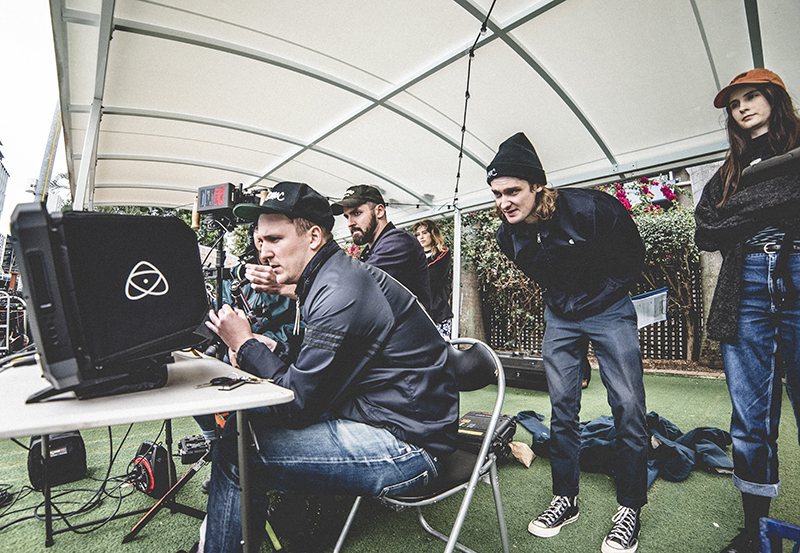 The video for ‘Day & Age’, directed by Nick Maguire captures this same energy both in concept and technical direction. Maguire explains how inspiration for the music video was born out of a seemingly inconsequential moment from Cormack’s life.

“I remember sitting down with Sam to chat about the clip earlier this year. He’d just returned from a stay with his parents and was telling us how every morning his Dad would get up at dawn and swim lap after lap in the backyard pool attached to one of these ‘swim belts’. It was so beautifully mundane that he couldn’t stop picturing it when thinking of an idea for the Day & Age clip. This was our starting point for the video.” 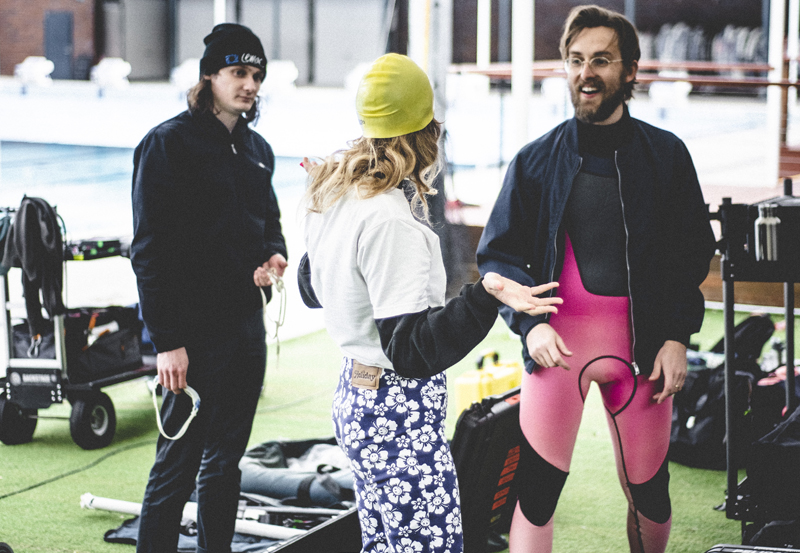 The clip follows a wetsuit-clad Cormack tethered to a swim belt in Brisbane’s Valley Pool. As he swims against his restraint, a lone female figure comes into view. As the camera switches focus back to Cormack, the figure edges closer to the pool’s edge. Expressionless and donned head to toe in a bright yellow tracksuit, she engages Cormack in an unrelenting stare-off. Though not overtly threatening, her looming presence gives the clip an eerie feeling. The sense of confused anticipation is not dissimilar to the feeling of a mishmash dream.

“The song is based on dreams that Sam has had. In a way the video is meant to feel a bit like a dream. Nothing really happens, there’s no WOW moment – it’s just a bunch of ordinary, mundane happenings that don’t seem to mean much (or make much sense) when chronologically retold.” 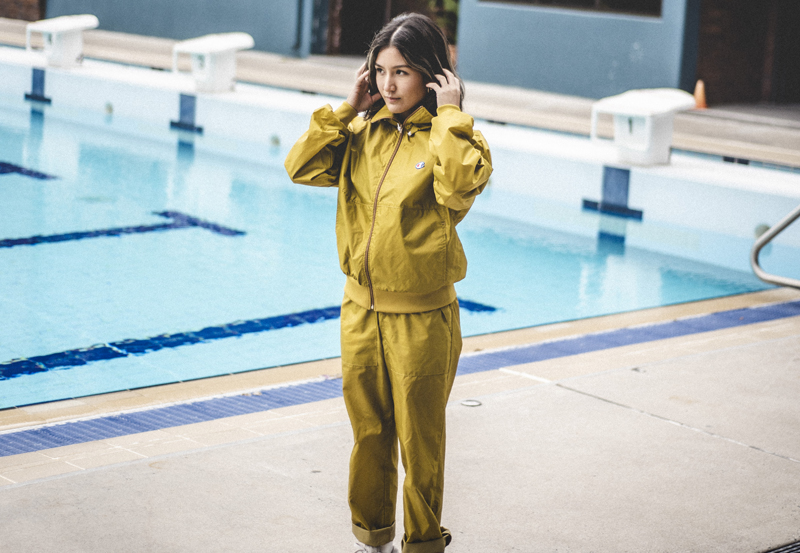 In a letter released by Sam Cormack he explains “For months I jotted down anything I could recall, believing that perhaps our dreams did indeed possess some sacred power.” The song explores the ways in which our sub conscience masterfully combines our feelings and fears with typical moments from our everyday lives. It makes us question the significance of these moments, and why they appear to invade our dreams.

The technical execution of the clip was steered by collaboration. The band and Maguire have worked together in the past, developing an understanding of each other’s personal style and approach. Maguire explains the kicking off point for his filming decisions: “Sam had watched a bunch of demonstration videos of the swim belt which were all the most boring and unflattering one shot, one angle takes – we knew we wanted to incorporate that feeling into the clip somehow.” 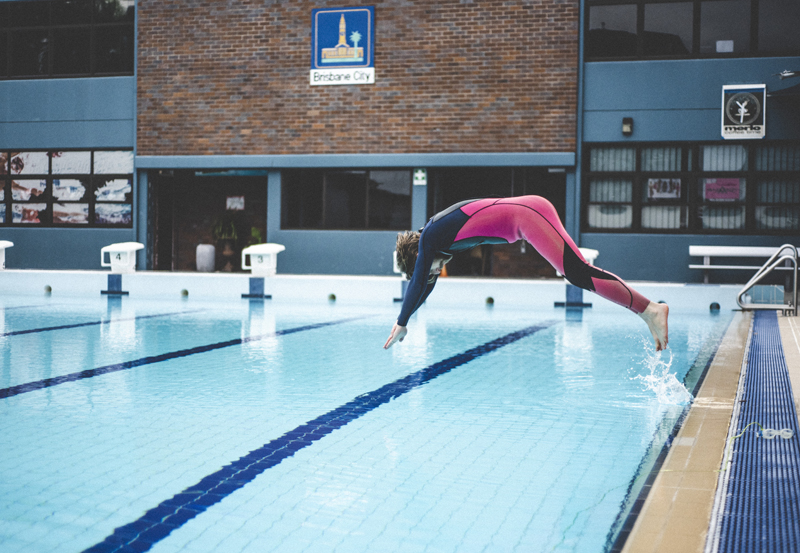 Maguire further fleshed this idea out with his choice to film the video in one continuous shot. This was uncharted waters for him as a director.

“Most of my work uses bold/dramatic lighting and quick cuts. This was to be the complete opposite – cold/flat tones and one continuous shot. I wanted it to feel like a long shot straight out of a movie where you can just immerse yourself in the scene and take in all the small details (interpreting them as you like). Jay Palmer (DOP) and I decided that we’d achieve this by using a long zoom lens, a crane/jib over the pool and the natural/soft tones of dusk. This gave us the flexibility to go from a WS to a MS, birds-eye to eye-level and essentially keep the shot interesting without taking away from the overall theme and mood.” 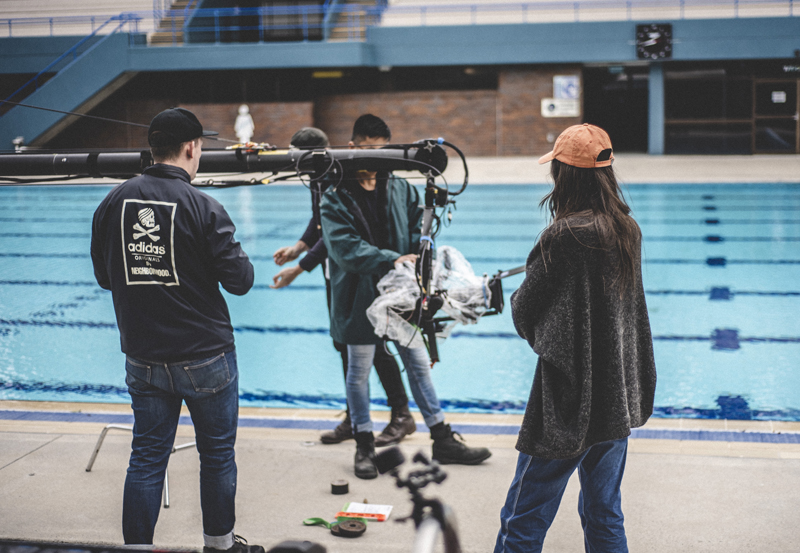 Shot on a crane-mounted RED Gemini, the cinematic style of the long zoom combined with the ambiguous subject matter draws us deeper into the scene. It allows for varied perceptions of the meaning behind the video. In the absence of clear action or a bright colour palette we are instead left to immerse ourselves fully within the shot. Elements that would otherwise have been overlooked, are gone over with a fine-tooth comb. Maguire explains:

“It’s not a montage or quick cuts of exciting scenes that you watch once – it’s long, mundane, confusing and (hopefully) the kind of video you watch again to try and make sense of it all.” 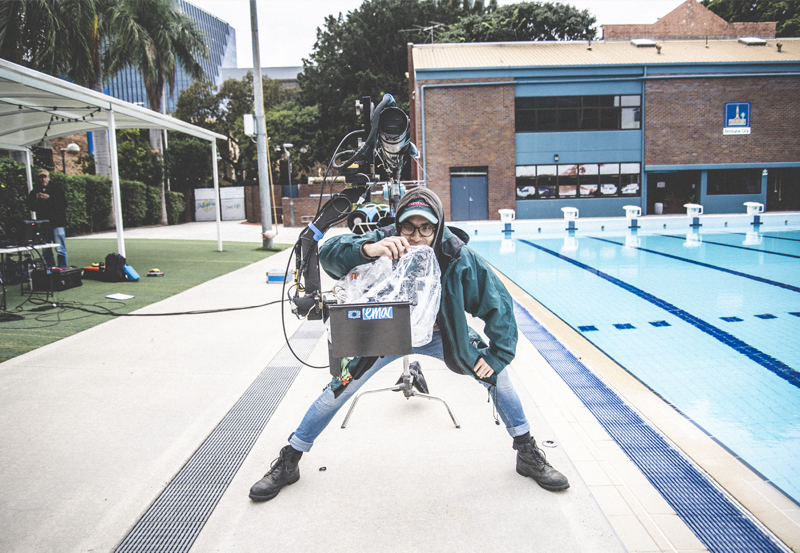 For a seemingly simple one take clip, a lot went into planning the technical production of the shoot. Maguire mastered the balancing act between staging and cueing talent, directing camera crew on their movements, keeping eyes on the monitor and simultaneously ensuring that Cormack remained alive and well while treading water on what was Brisbane’s coldest day in nearly a century. Maguire reflects on his process: “It was honestly a big learning curve. It took an entire afternoon of rehearsals but I loved it and would do it all over.” 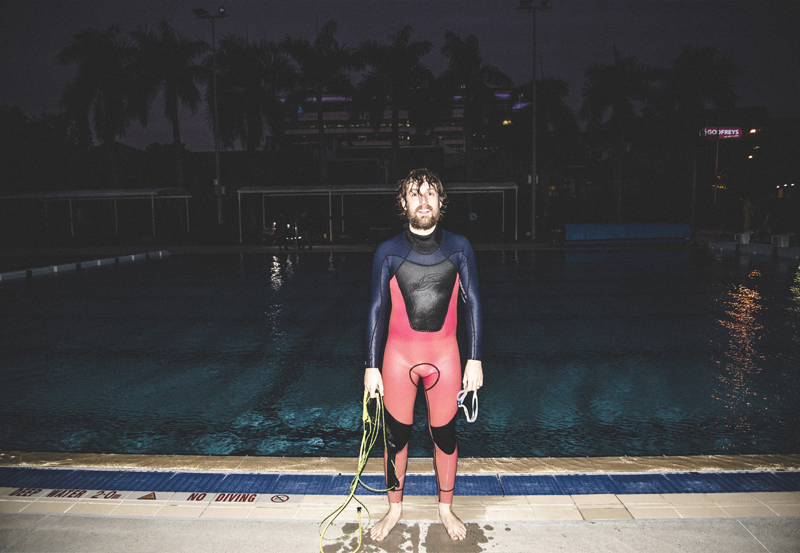 The clip invites multiple interpretations. The staging, distinctive setting and unique production choices work together to encourage us to examine and reflect on a deeper level.

“I like that it hopefully means different things to different people, but for me it’s somewhat of a commentary on how hard we try to impress people that we don’t even know. Most of the time it doesn’t matter or they don’t really care to begin with but we exhaust ourselves anyway in an effort to feel good about ourselves.”

Here is the official video for ‘Day & Age’