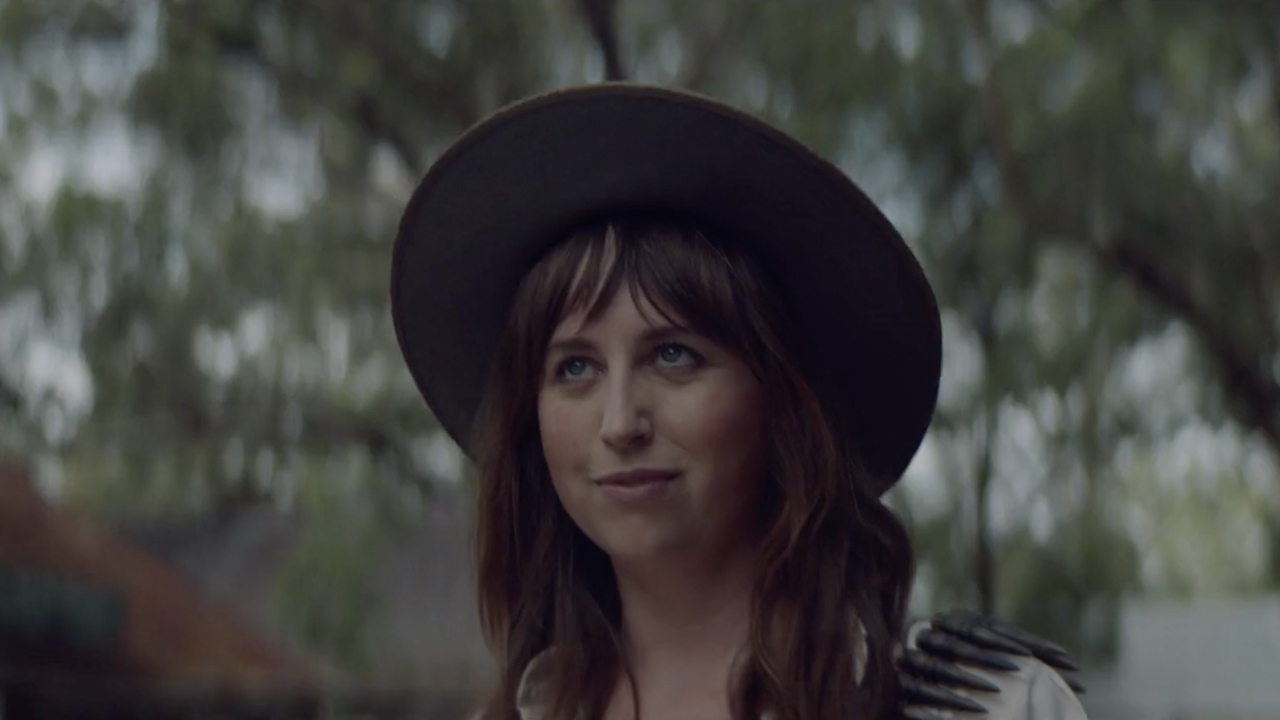 [dropcaps type=’normal’ font_size=’60’ color=’#ed145b’ background_color=” border_color=”]T[/dropcaps]here is an enchanting, nostalgic quality that runs through the music of Caitlin Harnett and the Pony Boys. Jangly folk arrangements set the stage for country-twanged vocals to shine. It’s a revival of country-soul with a modern twist. The band’s new track ‘5AM’ is a melancholy serenade inspired by a pregnancy scare touring America’s deep south. The lyrics explore Harnett’s honest reflections as she unpacks her dilemma.

The band collaborated with Sydney based director Aimée-Lee X. Curran for the new music video. ‘5AM’ is a tongue-in-cheek take on the country and western archetype, told from a uniquely Australian perspective. The clip’s storyline explores a chaotic encounter between two ex-lovers (played by Caitlin Harnett and Angus Hardy.) Subtle satire undercuts the narrative which is rife with kidnapping, brawls and a good dose of emotional manipulation. Curran comments on refining the clip’s overall look and feel:

“Originally myself, Jack Saltmiras [DOP] and Caitlin [Harnett] tossed around a lot of ideas with a heavy Spaghetti Western aesthetic. But somewhere along the line, we decided to embrace our collective Australianess rather than trying to be something that we aren’t.” 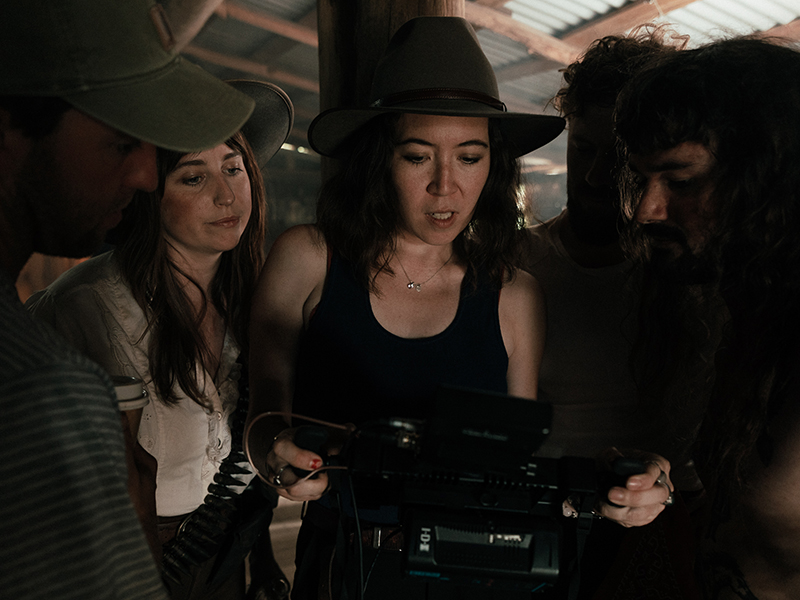 The team settled on an Australiana/bush-ranger theme as a backdrop for their story to unfold. In their search for the perfect location they stumbled across the Australian Pioneer Village in Wilderforce, NSW. The open air-museum is a historically accurate 19th century streetscape, complete with it’s own church, saddlery and railway station. Despite the exorbitant hire price, the team could not look past the venue, for its unrivalled charm, and the level of authenticity it brought to each shot. Curran accounts for factoring the venue into the clips’s limited budget:

“The venue is normally hired out for feature film and television shoots with proper budgets. They make absolutely no concessions for people like us pleading “micro-budget music video” or pretending to be film students. We dropped 90% of the budget on the venue…I get pretty hung up on production design – it is a huge focus for me when I’m developing concepts and once on set, I’d say I devote as much attention to the art direction as I do the performance direction of actors.” 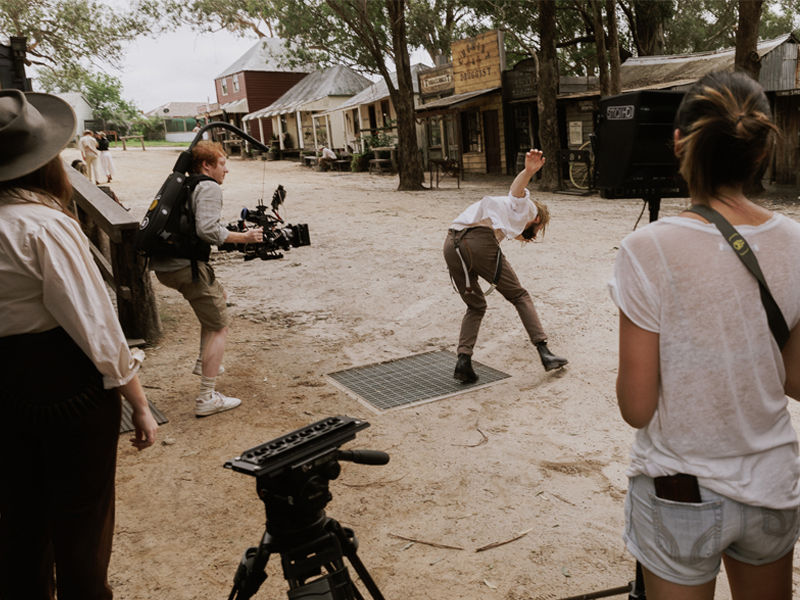 The clip opens on an establishing shot of our kidnapped protagonist (Angus Hardy) tied up in a dark, dusty barn. Light filters through the walls of the barn, illuminating dust which swirls like smoke and engulfs the scene. The dramatic use of light and shadows gives the scene a sinister feel. Harnett and her band emerge from the shadows and begin to torment their victim. The rest of the clip follows the kidnapped Hardy, as he is subjected to a series of cruel and degrading tasks – always presented with tongue firmly in cheek. At the whim of Harnett, he polishes shoes, scrubs floors and empties bed pans. Her lyrics taunt “I might be having your baby” – he has no choice but to stay. Despite being pushed to his breaking point, Hardy’s strength of character shines through in the way he relates to his surroundings. Curran explains:

“The way an actor handles a prop is important to me – how they touch or relate to a certain item and what that communicates about their character or emotional state. The way [Hardy] throws away the razor blade after he contemplates cutting himself, for example, was something I discussed with him. For me that moment is meant to be his real, “F*** you guys, I’m not gonna let you win” moment – as an actor he needed to put that subtext into the way he discards it. It had to be empowering for his character.” 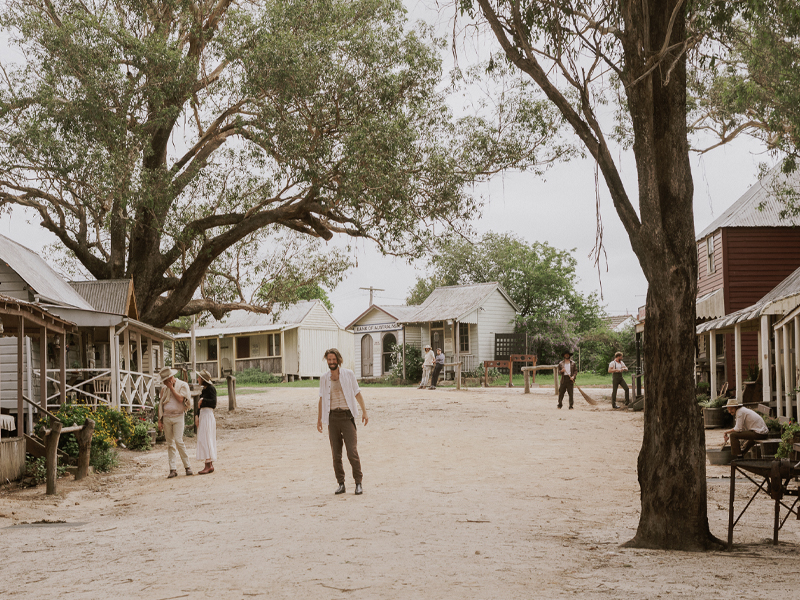 Various scenes and locations in the clip champion the inherent charm of the pioneer village. Filtered natural light, arid dusty streetscapes and lush Australian flora are on show throughout the clip. The same visual quality is mirrored in costumes by Angie Doherty (costume designer.) Neutral tones, linen, akubras, dirty cowboy boots, and garments adorned with native flowers give the clip a distinct Australian feel. Curran explores her influences:

“With our very limited budget, I knew it would be a hard ask to dress 12 people in fully fledged period-authentic pioneer-town clothes across multiple story days, so I took a lot of inspiration from the costumes in The True History of the Kelly Gang, which kind of blends an old bushranger vibe with a contemporary hipster look – loathe am I to use the H word. Angie [Doherty] did a baller job sourcing great period pieces from NIDA and picking through the wardrobe’s of our mates who acted in the clip.” 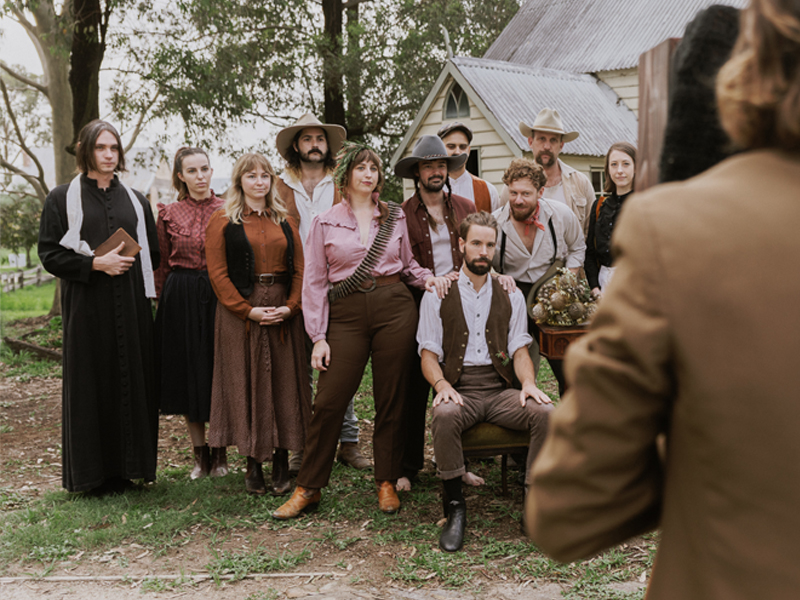 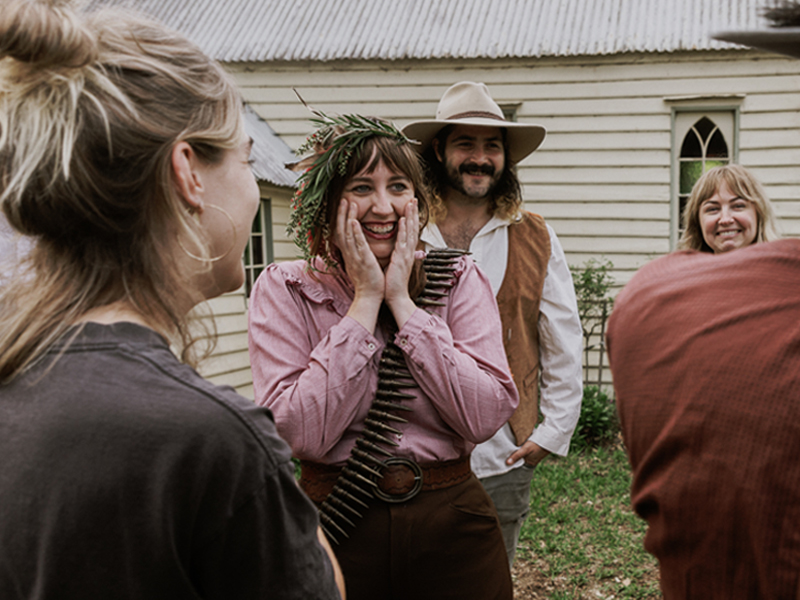 The small budget for the production allowed for a 6 hour shoot at the pioneer village. Curran describes the day as a “hilarious race against time.” She elaborates:

“Once you take into account bump in, set up and lunch, we were left with about four hours of shooting time to record what is essentially a short film, one that utilised ten different spaces of the village and involved big set ups. The story also occurs over multiple days and months, meaning our cast of 12 had continuous costume, hair and make up changes. The fee for shooting past six hours was something like $300 every half hour over. Myself and Jack [DOP] literally took the last shot at five minutes to the final hour by ourselves while the rest of the cast and crew were running around like mad dumping all the gear outside the front gate.” 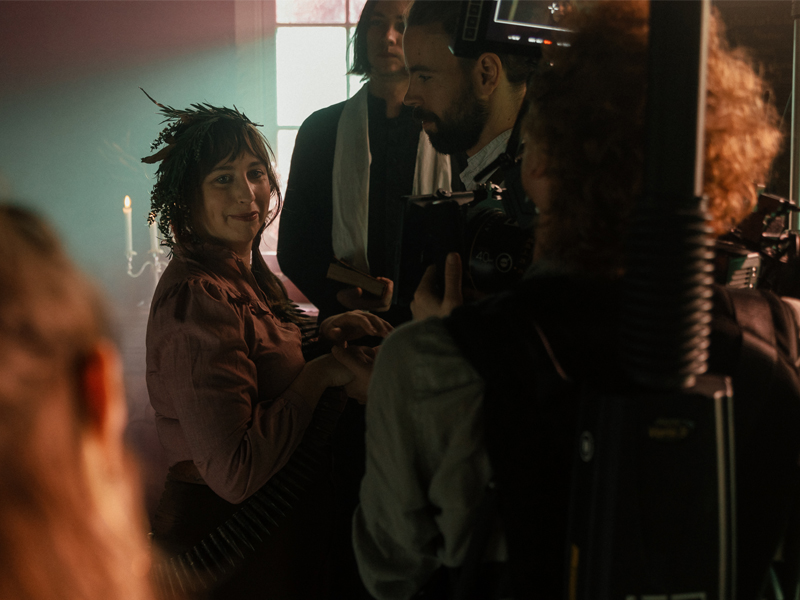 The film equipment choices for the clip were informed by style and practicality. Due to the very small interiors at the location DOP [Saltmiras] decided to go with Large Format, as getting the coverage needed on super35 would have forced the crew to use “cartoonishly wide lenses.” He elaborates:

“Considering that we were going to be handheld all day and didn’t need higher frame rates, we shot on an ARRI Alexa Mini LF from the lovely folks at The Front Camera Hire. Being a western theme, anamorphic felt like a clear choice. Luckily, we were able to shoot with their Atlas Orion set and utilise the full height of the LF sensor.” 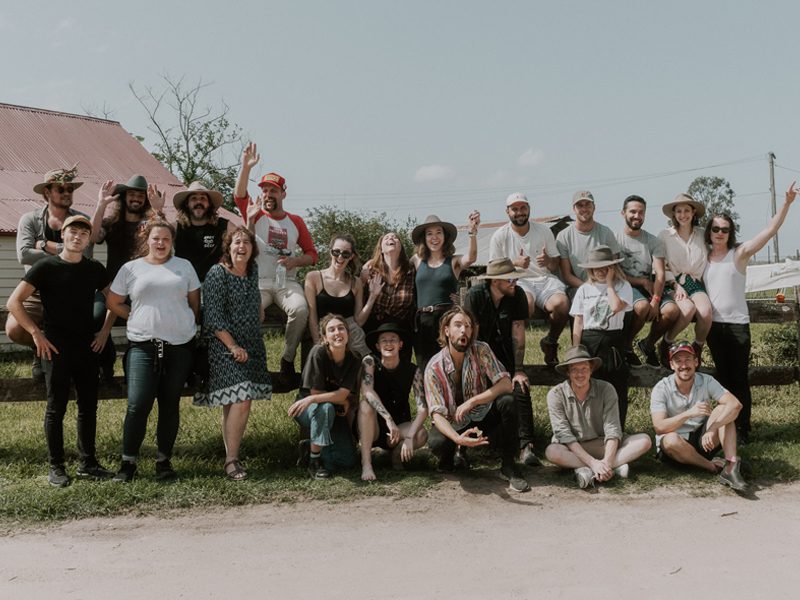 Curan has produced an emotionally layered clip which mirrors the depth of the song’s heartfelt lyrics. Creative technical decisions as well as the dark sense of humour that undercuts the narrative delivers a memorable clip with a captivating edge.

Here is the official video for ‘5AM’

Keep an eye out for Aimée Lee X. Curran’s new clip “A Beautiful Undone” for Aussie artist ILUKA, slated for release this October.