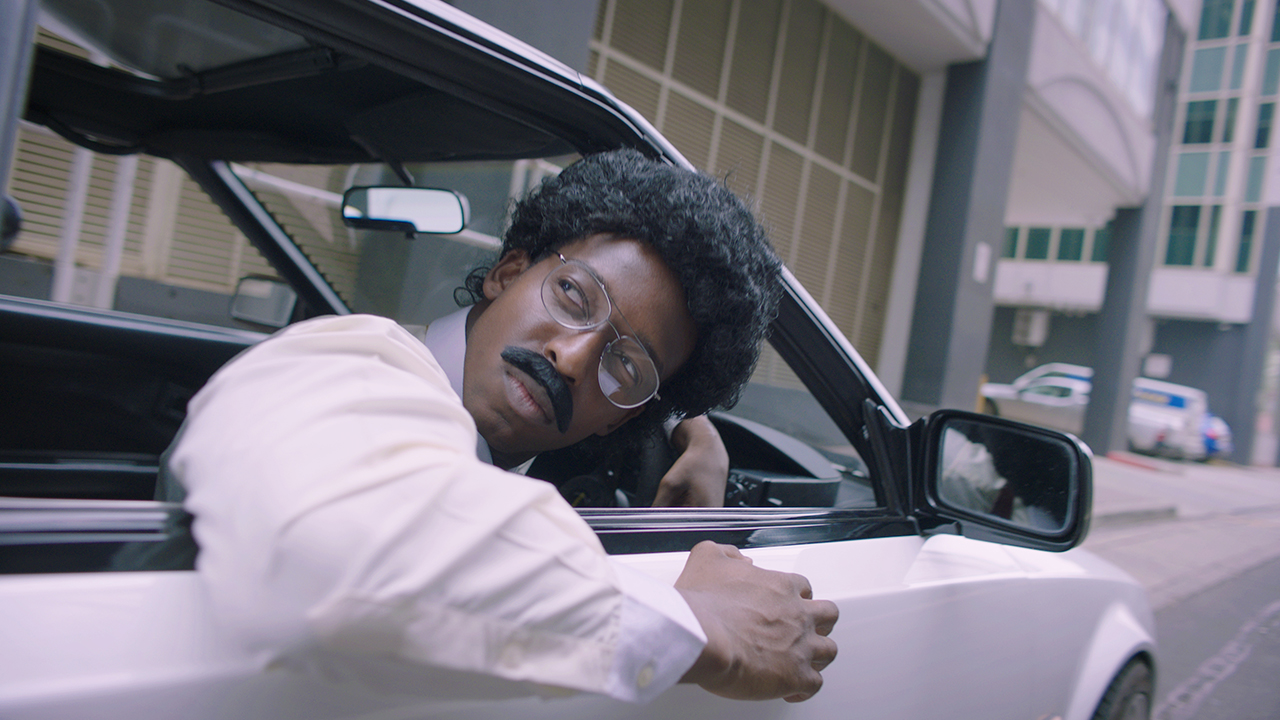 by Anth Webster
0 comments
[dropcaps type=’normal’ font_size=’60’ color=’#ed145b’ background_color=” border_color=”]A[/dropcaps]h the 80s. Shoulder pads, car phones, cocaine, those blue business shirts with a white collar… What a time to be alive. Capitalism was reaching a fever pitch, fast talkers and smooth movers were making money hand over fist and absorbing every extravagance that lifestyle could afford them. For such a dynamic and colourful decade, it’s no surprise the time period has been the stylistic and attitudinal inspiration for so much art. 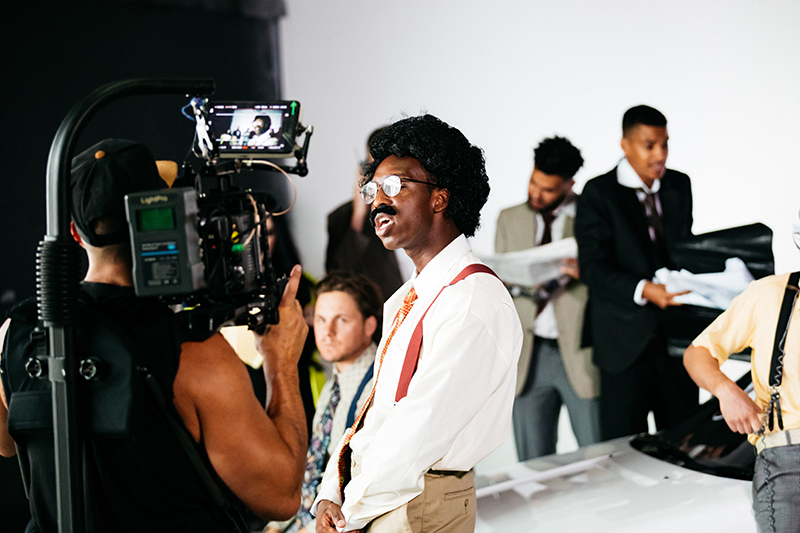 For director Nic Vevers, the concept for his new video for Canberra rapper Citizen Kay’s latest track ‘Funny Business’ flowed naturally upon hearing the song: “The idea really just came out of the vibe of the track when I first heard it. The music production felt so 80’s so my mind instantly went to videos of that era. Then it was really just as simple as the song title; add ‘Funny’ and ‘Business’ together and this is what you get.” As such, what we see in the video is Citizen Kay, guest collab Genesis Owusu, and a rabble of slick business folks tearing up the town, 80s style.

“I like to keep video concepts pretty simple and fluid,” Vevers continues, “so that was all we started with, basically just a theme. I’ve done about 10 videos with Kay now and the best ones tend to be when we just wing it. We decided on having no real narrative, no script and no shot list, just let the song and performance do the talking. I know Kay is gonna bring the energy, I just have to set up the situation and we freestyle it.”

“The great thing about working with Kay is he’s down for anything and having worked together so much we were able to achieve a pretty ambitious shoot schedule. We shot in over 6 locations around town in 5 hours. We knew it was gonna be a lot of fun just by the silly nature of the idea but we really had to hustle to get it all done. It was a lot of pressure on Dale (Bremner, cinematographer) to get the shots. We only had the two of us so he was doing everything on the fly. A lot of it was one take and move on, but he absolutely nailed it every time.” 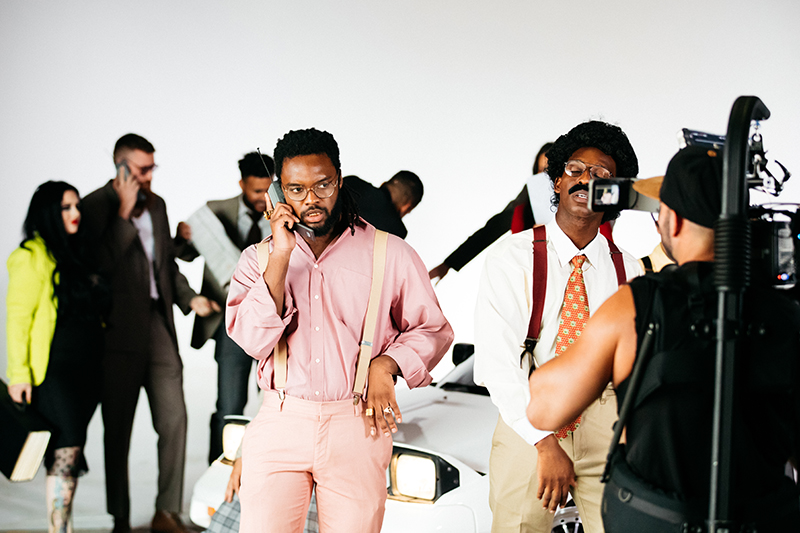 The most important factor in period videos of this nature is really nailing the look. It takes an absolute dedication to making sure everything in shot looks of the time and also looks really good in the process. Nic Vevers tells of how everything came together in the production design department: “The big challenge with this one was really selling the 80s business/public service aesthetic on a tiny budget of $1000. We had to pull a lot of favours and raid the parents’ wardrobe to pull it off… We knew that it would just take a few key props to bring the 80s to life. Specifically, the car and the phones were the top priority. My good friend had a classic 80s white MR2 and I’d been waiting a long time for the right project to use it, so that was easy. I found the iconic Motorola flip phones in LA and plenty of accessories online.”

“Largely we left it to the extras to DIY their own looks and we had no idea what they would go with or what direction they would take. Canberra’s op shops got raided and everyone nailed it. The best part was that it really brought out people’s own personality, as they took it to a level I never would have thought of. It really comes out in the portrait scenes, they naturally fell into funny characters with back stories which was hilarious. Same with Kay. I just said get some sweet threads and he delivered. From the moment, we started he just stayed in character for the whole day. A lot of the driving stuff, he had no idea we were rolling, he’s just playing it up. Another great resource in Canberra was the local recycle shop at the tip, we bought all this old office junk for dirt cheap, scattered it though out the clip and it really adds to those funny moments.” 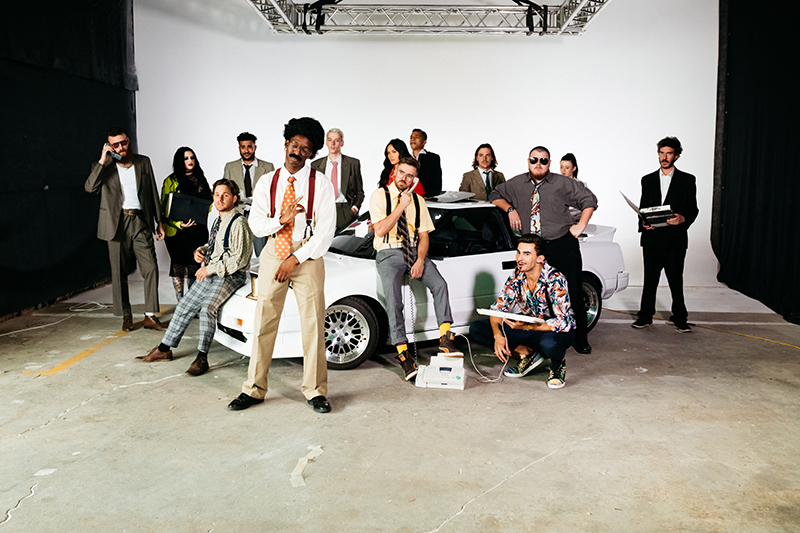 The 80s vibe is felt throughout the direction and cinematography on the video too. The camera moves around the performers, pulling some bizarre close-ups and angles, giving Kay, Owusu and the extras room to just totally ham it up. Vevers discusses how he and DOP Dale Bremner bought about this style of shooting that is delievered with a certain wink and bit of tongue-in-cheek: “A lot of it came just laughing about ideas with Dale and Kay before the shoot. We referenced clips like Sabotage (Beastie Boys), Wall Street even Freddy Got Fingered. Searching old photos of corny business headshots very much gave us the look we were going for.”

“I left it to Dale to develop that cheesy infomercial, corporate training video style, a lot of which came from the frantic nature of the shoot. The energy and pace really came from how rushed we were with it and it just worked great in the edit. If something wasn’t perfect, we just kept it and moved on, it kind of added to the unnatural awkward vibe you see in 80s videos.” 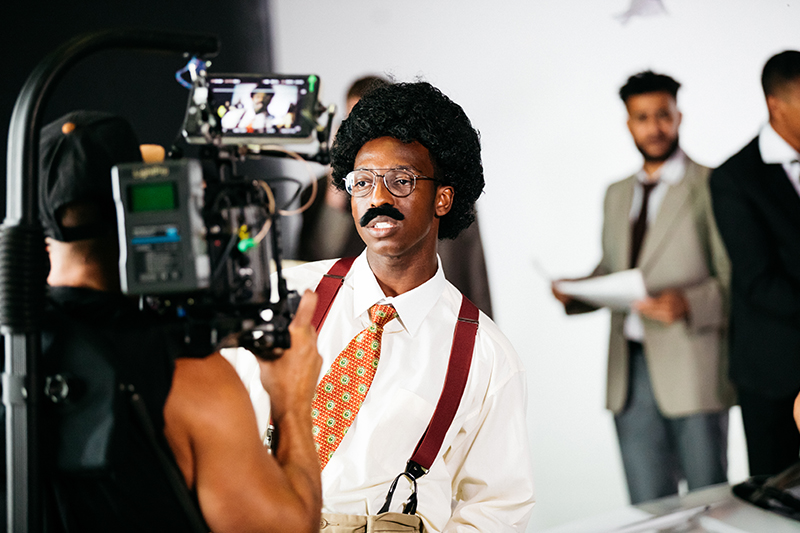 It feels like a lot of why this video works so well can be attributed to how much fun they’re all having. As Vevers mentioned, they came at the production freely, laughing and building on things as they went, and that can absolutely be felt in the final product. The video is also delivered with enough variation in scenes to be enjoyable start to finish, from Citizen Kay driving around the city like a mack, to the awkward office photos, to the pinnacle scene in the song’s bridge where the office workers are letting loose and destroying everything; including going ham on a printer in a little nod to that timeless scene from Mike Judge’s Officespace.

When asked about the influences and the direction behind this refrain of absolute chaos, Vevers replies: “Yes! Officespace was definitely an influence, also The Big Short and movies about Wall Street gave us a reference to give to the cast. During that scene I was just hyping the extras up to pretend like “Wall Street has crashed”, motivated by all the famous scenes of people shredding documents and losing their minds. The catalyst was that the tone of the track really shifts in that verse. It comes down a notch so I felt we needed to change it up. I was looking for a moment for the extras to shine and what better way than going nuts and smashing shit.” 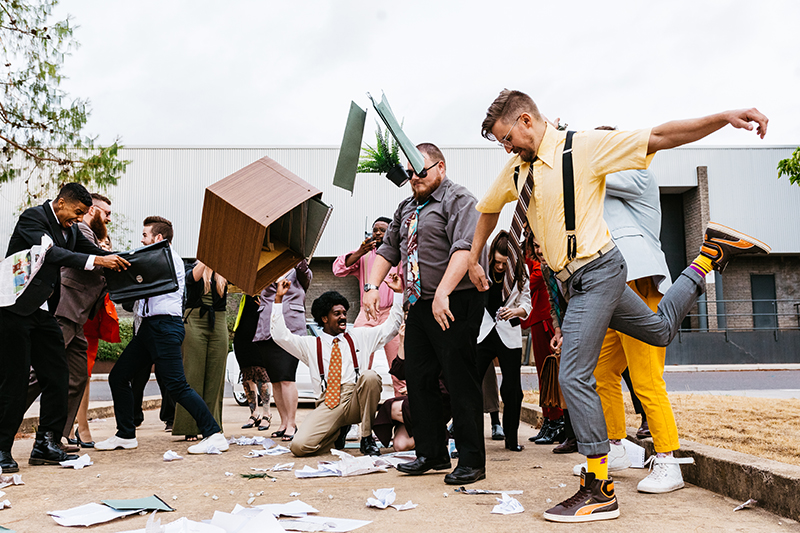 “That was hands down the best part of the day and again the cast just ran with it. I didn’t give much direction and people were going to places I hadn’t thought of, building characters out of nowhere. Co-workers turning on each other, the eating paper/destroying evidence was all improvised on the spot. That freestyle approach gave us a lot of gold and really sells the vibe of the song well.”

Here is the official video for ‘Funny Business’