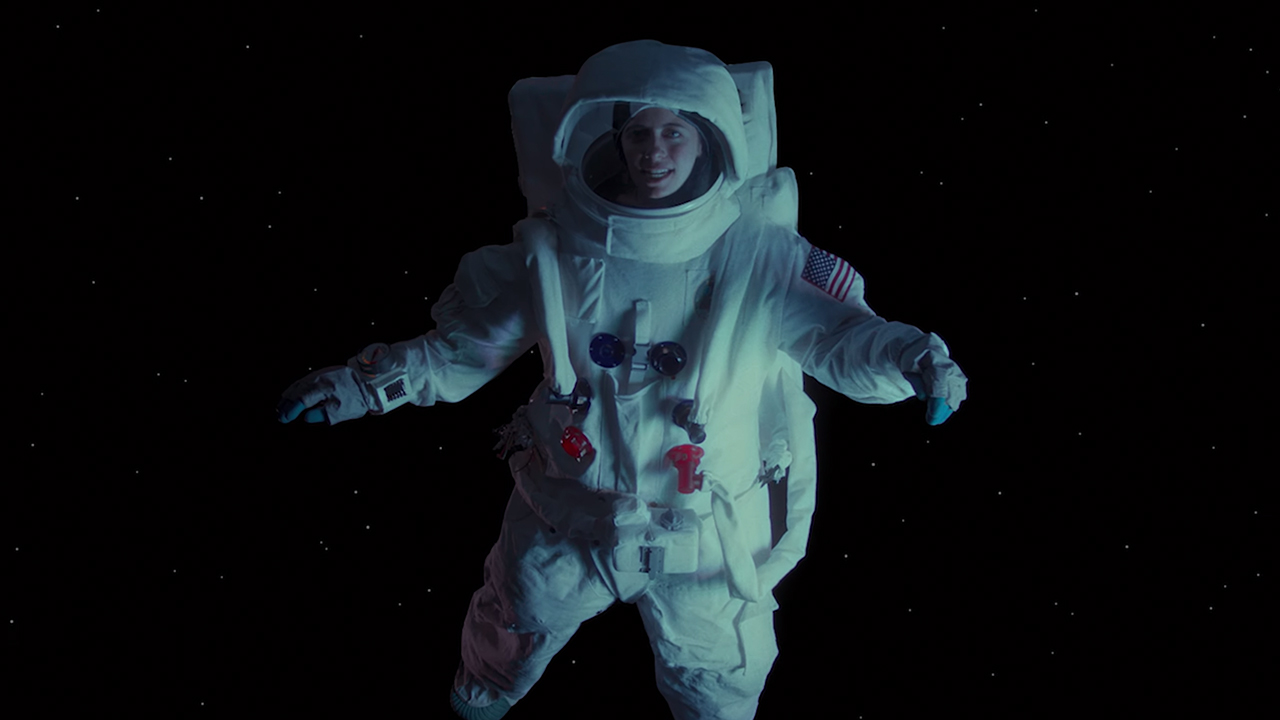 by Anth Webster
0 comments
The canon of space cinema is about as vast as the universe itself at this point. Many of the world’s most iconic filmmakers have dabbled in the genre, with some of cinema’s most timeless flicks taking place in the great yonder. When filmmaking duo John TerEick & Jake Nokovic, collectively known as coool, came to putting together a music video for Chicago indie emo group Ratboys, they knew they had a whole universe of space movie inspiration to draw upon. 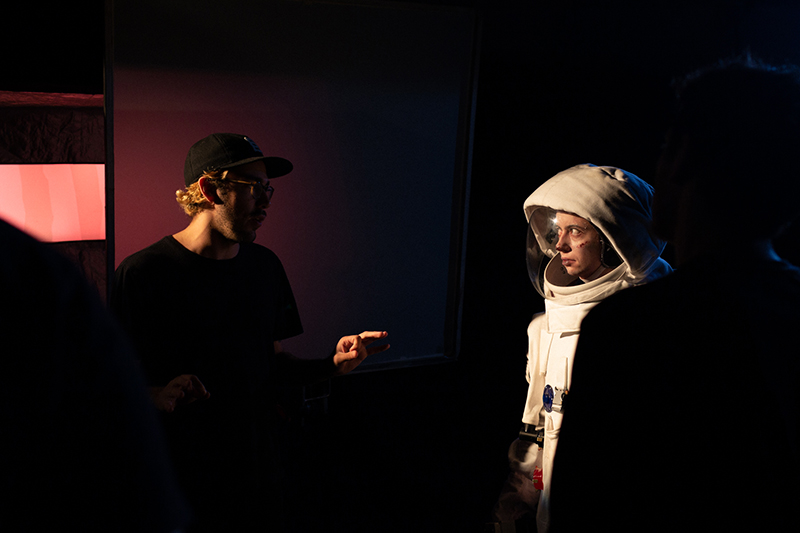 “The conception of this project is kind of a perfect little serendipitous story.” advises coool, “We were big fans of Ratboys and had seen them play a couple times. John had an idea for a single-take video that he’d been wanting to execute for a while that involved an astronaut floating through space and takes their helmet off in a moment of self destruction. We cold emailed Julia (Steiner, Ratboys) a pitch for that concept, not even knowing that they were working on a new record. To our delight, she told us that the lead single was ‘Alien’ and that she wanted to take a ‘lost but not afraid in space’ approach to the video.”

“So it kind of just magically came together. That quickly turned into us looking at the prototypical narrative structure of most space epics. It’s always this story of resilience and then an incredibly improbable ‘eureka’ moment that ‘might just work’. We wanted to flip that on its head and explore how dark it is if that idea doesn’t work. We looked at 2001, Gravity, The Martian, Star Wars, Star Trek, Apollo 13 – and just tried to be like “what’s the thing that would make this a lot more depressing?” 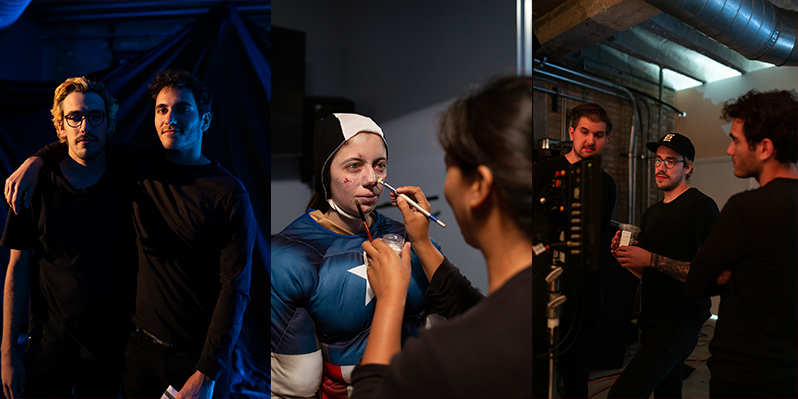 The video is centred around Ratboys vocalist/guitarist Julia Steiner floating listlessly through space while a control centre crew made up of guitarist David Sagan, the Ratboys live band ensemble and a few other assorted cohorts, desperately try to rescue her. However, as TerEick & Nokovic mention above, they are unsuccessful. Steiner accepts her fate and removes her helmet as she is welcomed by a Kubrick-esque rising sun. When asked about the choice to end the video on such a bummer, they reply: “Despite our best efforts, things don’t often work out the way we hope.”

“We felt the unsuccessful mission stayed true to that reality. We think it forces the viewer to consider that moment of failure, especially when it’s unexpected. The idea for the helmet removal came from that episode of Magic Schoolbus where Arnold takes off his helmet in space after being badgered by some of the other students. We remembered watching that as kids and being so affected by how brutal and horrifying the idea of knowingly doing that to yourself would be in the vacuum of space.” 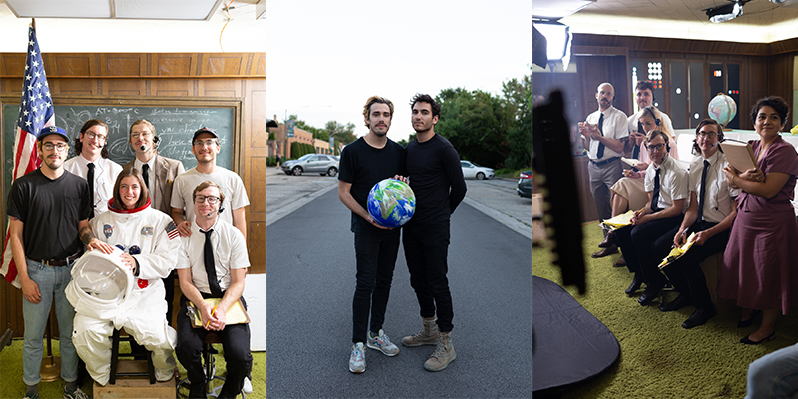 With this sort of concept, the default setting feels like it would be to create the band’s control centre in a highly stylised CGI world of smooth services, holograph touch screens and expensive looking equipment, however coool opted to go a different route. The control centre is all wood panelling and retro equipment, a choice that was in part brought about by budgetary limitations, but also imbues the whole video with such a unique character: “That was one of the challenges when we were developing the tone of the video because we wanted to pull from those contrasting sources. We took cues from futuristic places like 2001 and Gravity, but also wanted a strong 1960’s NASA space race flavour as well.”

“Another big source of inspiration was The Magic Schoolbus, which naturally has a more retro, childish feel. Because we weren’t working with a budget that allowed for the production scope needed for a huge space adventure piece, we decided to lean stylistically into an almost imaginary, youthful, ”we’re playing pretend” feel. Everything looks pretty legit but in a way that’s childish and fun. We started referring to it as the “Be Kind, Rewind” element. Like this weird band of misfit scientists working at a Kirkland Signature brand NASA are trying to save their doomed and fearless leader. It was this way for our production designer, Chris Tuttle to use a relatively limited budget to his advantage creatively. Like the oxygen meter Julia wears on her suit or the fakey computers in ground control weren’t made to look high tech and realistic. Chris is an absolute machine and worked tirelessly on an insane schedule to design and build everything.” 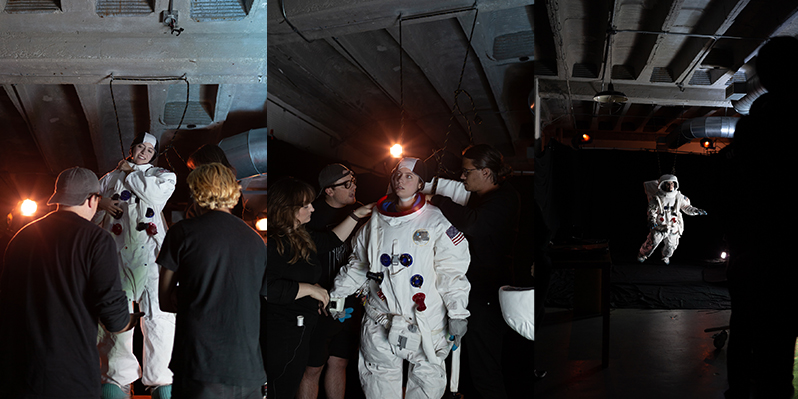 The shots of Julia Steiner floating through space are so well executed. A bulky space suit, centred in frame surrounded by the vast blackness of space, hanging loosely in the air and completely alone. Especially given the aforementioned budget limitations, we had to know about the actual practicalities of making these shots happen. TerEick & Nokovic elaborate: “A lot of heavy lifting was done with the help of our friend Ang Puglise, who graciously volunteered an insane amount of time roto-ing and creating all of the space landscapes and star patterns for the video. On set we rigged Julia up to scaffolding with ropes and a rock-climbing harness. Then we put her in a muscled-up Captain America Halloween costume, and slipped the astronaut suit over that rig. We shot her against a black backdrop as it made it much easier to place her in a space environment in post. That system allowed her to move her body freely. We directed her to move as if she was in slow motion to mimic the zero gravity look. We also moved the camera slightly throughout the space shots to sell the effect.”

It’s such a wonderful video packed with so many enjoyable little moments and nods to space movie clichés, and backed by some fantastic production design and direction. This sort of expansive genre work always feels like such a massive undertaking for a music video and it’s an absolute delight when it is delivered in such a fun and triumphant manner. There is a joy about the production that can be felt through the screen, like everyone involved was having such a great time on this project. 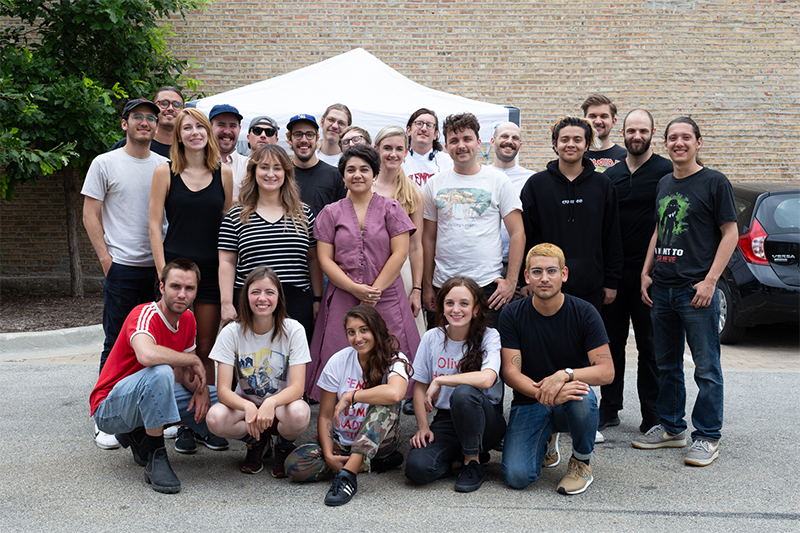 When asked about the choice to feature the band as actors in the video rather than the safer performance route, and how that effected the vibe of the video, John TerEick and Jake Nokovic reply: “Having the entire band perform would have been fun but we wanted to stay true to the storyline and make sure we got that isolation from Julia. It makes her performing the vocals seem more like a plea for help. It wouldn’t be the same if the band was floating behind her. The entire cast were either friends of the band or friends of ours. Both of us grew up making movies with our friends and sometimes the film world presents very limited opportunities to maintain that fun, collaborative environment. We hope we don’t ever have to compromise much on that.”