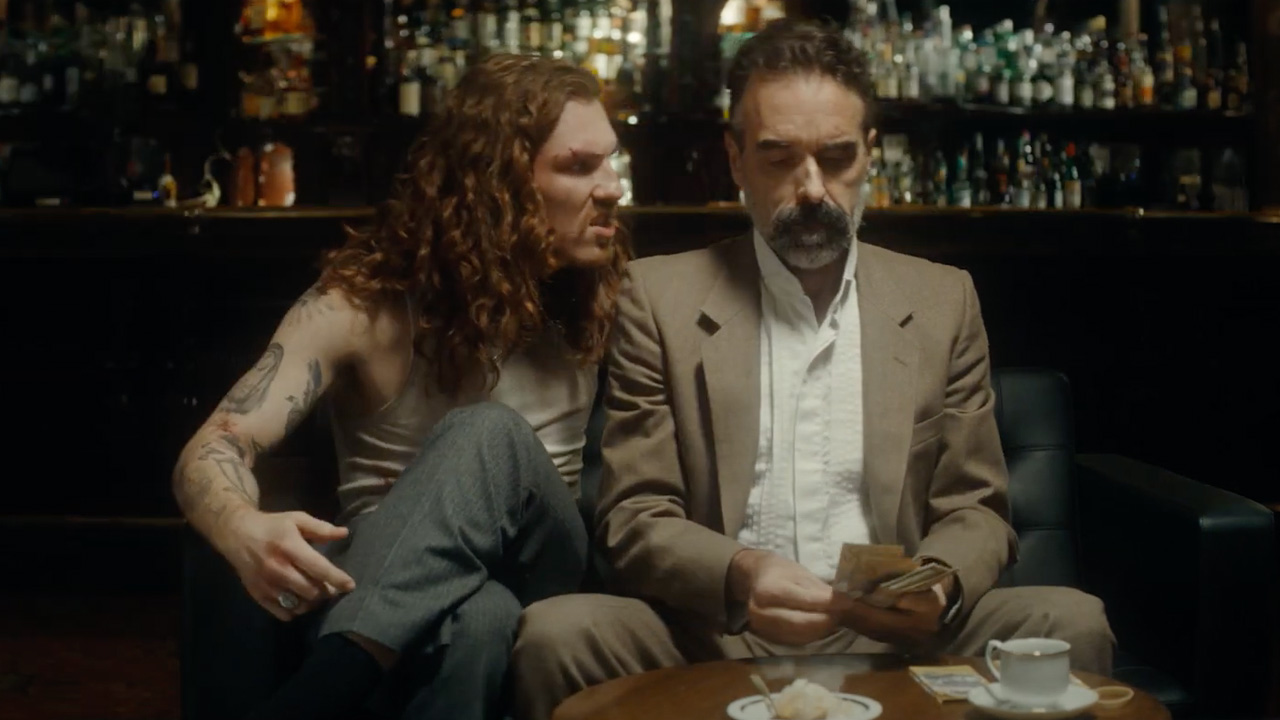 olletto Bianco exploded onto the scene in his last music video CHOKE, and now director Jessica Long takes control of the character for the follow up clip THRONE, expanding on a scene hinted at in the last chapter and taking us into a world where we can’t always trust what we’re seeing. Bianco is the solo project of Joel Martorana, having previously been involved in bands Endless Heights and Peace Ritual. The character is his own way of exploring identity, masculinity, mental health and his own Sicilian roots – the name literally translates as “White Collar”, a grim and ironic joke when put in context with the mob violence that the character revels in. 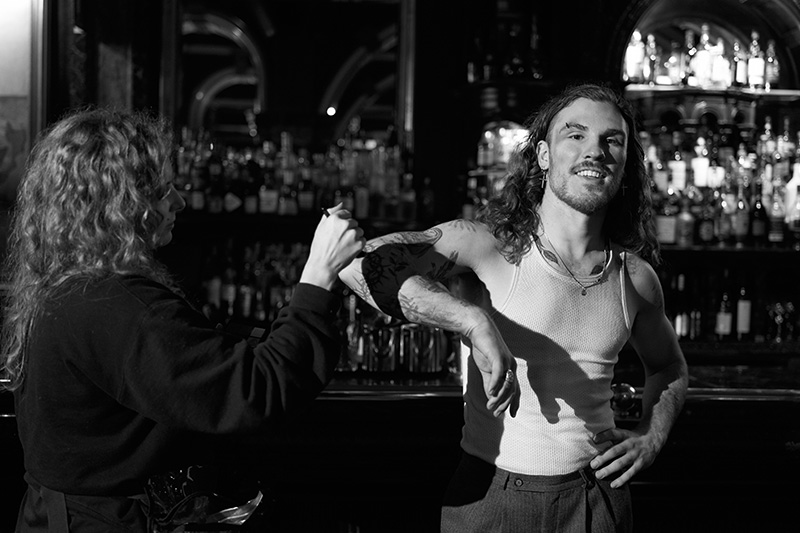 While CHOKE (Directed by Mikey Hamer and can be seen here) took the form of a series of vignettes, some brutal, some intimate and revealing, THRONE is a single story set in a single location and takes advantage of the different format to double down on examining Colletto’s mental state. With Colletto Bianco’s first live stage appearance fast approaching, Joel explains how this affected the writing process:

“Jack Shepherd (DoP for both clips) first pitched the concept of THRONE with the intention to ‘zoom in’ on one of the ‘montage moments’ from Choke – and really be able to flesh out a narrative for the audience, as well as allow for a more performance heavy clip. The ideas were refined with Jess & myself, and I definitely wanted the clip to allude to a live performance element. It was clear from the CHOKE video that the project was resonating, however the whole team was keen to show that it will translate to a live performance component soon!” 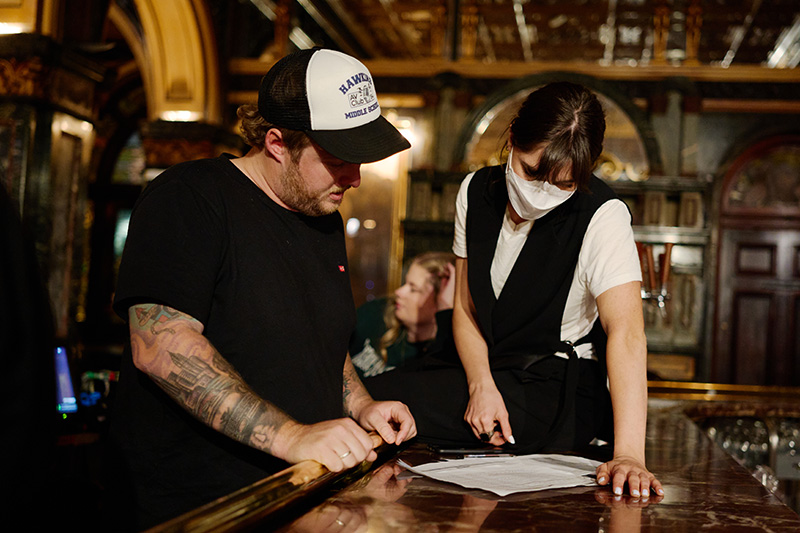 The clip follows Colletto as he drops off a briefcase of money to the grey-suited and grey-bearded Don, expertly portrayed by Richard James Allen. Colletto performs the song and acts menacing, but is unable to elicit a response from the older gangster, who sips his tea and reads his newspaper with detached calmness, which only enrages Colletto further. We get the sense that the Colletto we see jump up onto the bar and help himself to a glass of whiskey isn’t literal, the real Colletto might be sitting silent and impotent in his chair, imagining all the brash and violent things he would do if he could express his emotions. Jesse remarks:

“There was quite a specific backstory between Colletto and the Don which was established in CHOKE. So when it came to THRONE, it was more of an escalation of tension between these two characters. Colletto’s clear frustration for not being acknowledged by the Don is manifested through his erratic movements – which plays on the ambiguity of whether he’s imagining what he would do or if it is really happening.” 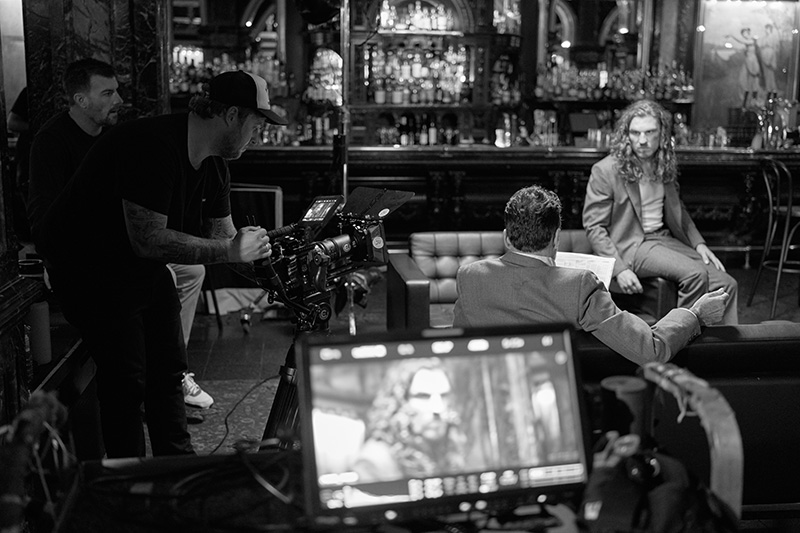 The location for the clip couldn’t have been more fitted to the strong style established in CHOKE. Marble Bar, situated on the bottom floor of the Hilton in Sydney, looks for all intents and purposes like a cathedral, but with tables instead of pews and a fully stocked bar to work with. Small LEDs hidden in the marble columns light up in unison with the song and compliment Joel’s erratic choreography, it gives the impression that the space is alive and watching the events unfold. DP Jack chose a RED Gemini camera paired with P+S Technik Evolution 2x Anamorphic lenses, knowing that the high ISO capability would be essential for dealing with a darkened environment. The results speak for themselves, and Joel recalls the effort that went into the scene:

“Chris Elder (producer) and I spent weeks to months negotiating with the location in order to secure it for a shoot day, and we all collectively felt that this particular location was perfect for the Colletto Bianco world. Chris & team had to really jump through hoops to achieve the lighting effects properly without touching any of the heritage-listed marble walls. We had the location for 8hrs including all bump in & bump out – it was a massive, nonstop day and Chris & the team really show their experience here in pulling off such an amazing set up in a timely fashion.” 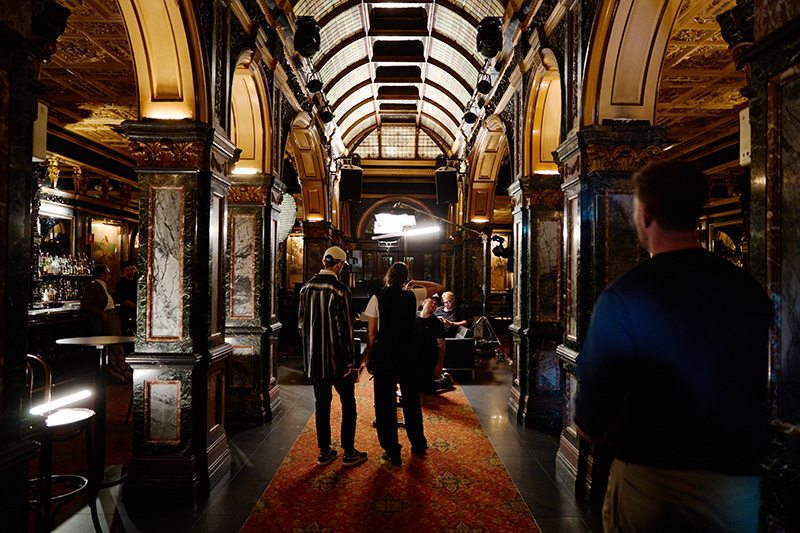 Choreography is vital to the energy of the clip, with Joel pouncing around the pillars of the space. Displaying his aggression between sips of rum and building toward the violent climax. For Jesse, it was a matter of directing Joel’s natural energy in the perfect way to compliment the overall feel of the clip, while still allowing for unplanned magic.

“Working with Joel was a lot of fun, the man is a ball of energy! He’s also an incredibly nice human being and was willing to give anything a go. When working on performance, we had a brilliant choreography on set, Neven Connolly, who Joel and I worked with to block out Colletto’s dancing. We shot quite a few iterations of movements for each shot, some were highly choreographed, while others we let Joel loose. The final edit is an amalgamation of both, so it’s a bit of all three of us in there.” 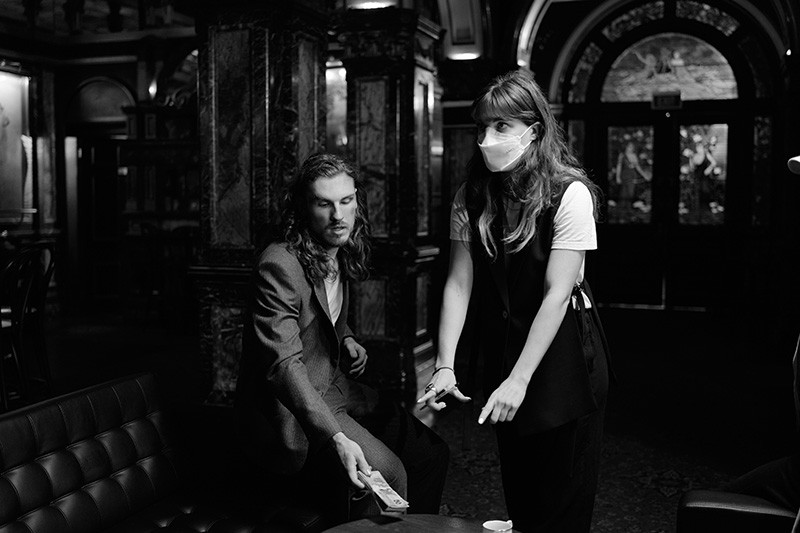 For Joel, one of the most defining themes of the project is heritage, and he leans heavily on his own Sicilian Catholicism when creating. It’s a through-line that he can use to guide all parts of the project, whether it’s the songs, music videos, or dancing.

“Catholic iconography is something I have always been obsessed with (and genuinely connected with) my whole life, as a Catholic myself. I think the ‘drama’ & narrative captured in religious icons has such a strong tone and story-telling power that instantly connects the ‘make-believe’ character of Colletto back to the real world.  In order to ‘world build’ effectively and make the Colletto universe as believable as possible I’ve leveraged anything authentic and real to me as much as possible, and I feel lucky to have forged my own sense of faith strong enough to (indirectly) reference through Colletto Bianco without feeling like I am compromising my beliefs in any way.” 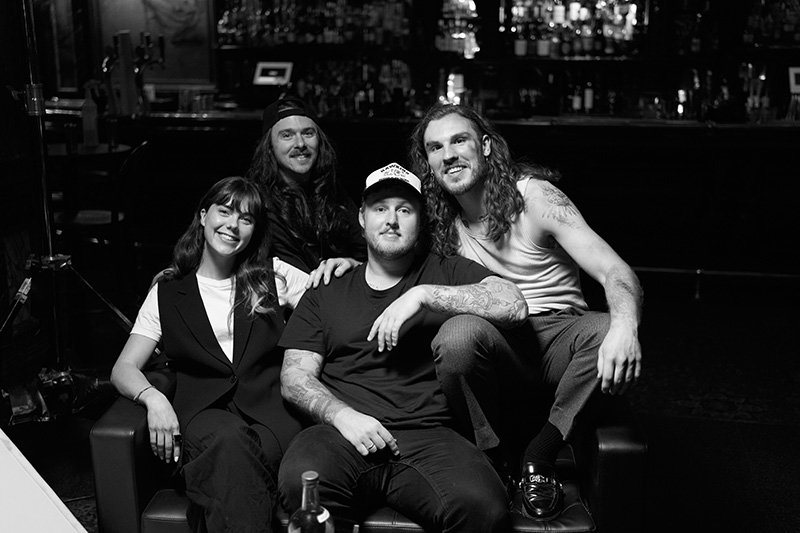 It speaks to Joel’s vision that he can maintain such a distinct vision between two different directors, and quality of THRONE speaks to the artistry of Jess and her team. This release marks two stellar appearances of the character in a row, and with his first live show fast approaching there’s no signs of Joel’s character losing momentum. We may not know what comes next in the saga of Colletto Bianco, but we can be sure enough that it will impress and shock in equal measure.

Here is the official video for ‘Throne’