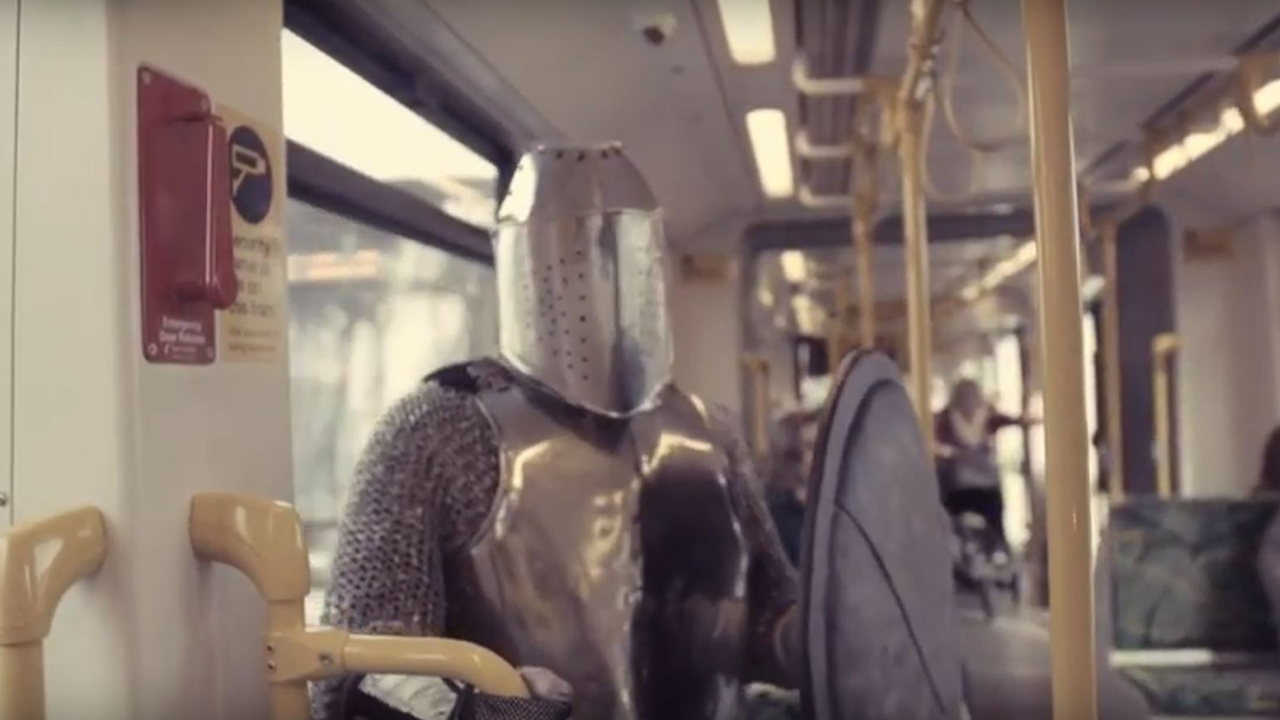 [dropcaps type=’normal’ font_size=’60’ color=’#ed145b’ background_color=” border_color=”]O[/dropcaps]ne of the more humorous and telling lines from W.H. Auden’s The Age of Anxiety, a post second world war poem about man’s struggle to find identity in an industrialised world, states that “the world needs a wash and a week’s rest.” In the new music video for Danika Smith’s ‘Suit of Armour’, directed by Eric Sayaman, similar feelings of isolation and alienation – perhaps more prevalent today with the burgeoning integration of technology into sociality – are explored through a clever character metaphor of a modern knight, who, like Auden, comes to think that a wash, a break, and even a change of scenery could be a solution to the angst. 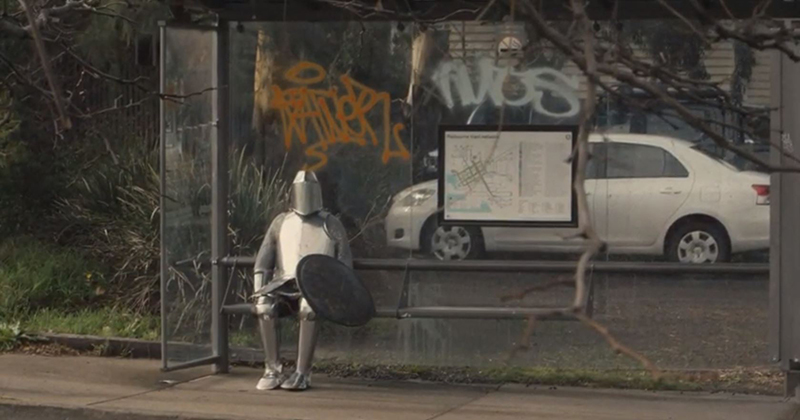 The Melbourne-filmed music clip, shot by cinematographer, Cato Maclean, has a wintry Australiana aesthetic, and uses an ad-hoc filming style to capture inner-city suburbia and nature – provoking a sometimes home-video feel. The imagery maintains a softness of colours and textures in its depiction of flora and domestic scenes, which contrasts with the knight’s metallic suit. Minimal shot compositions also draw back from affectation to shift focus from the urban scenery to the hard physical characteristics of the suit. “It rained early morning, which gave everything a grey, melancholic light which helped visually convey not only the tedium of the day ahead but also the internal state of the knight,” says director, Sayaman

One of the video’s earlier scenes captures the knight standing in front of a mirror, gesticulating to itself – calling back to Martin Scorsese’s Taxi Driver scene in which Robert DeNiro speaks to and challenges his own reflection – in an attempt to summon up courage to face the day, and testing the sturdiness of the shielded appearance. 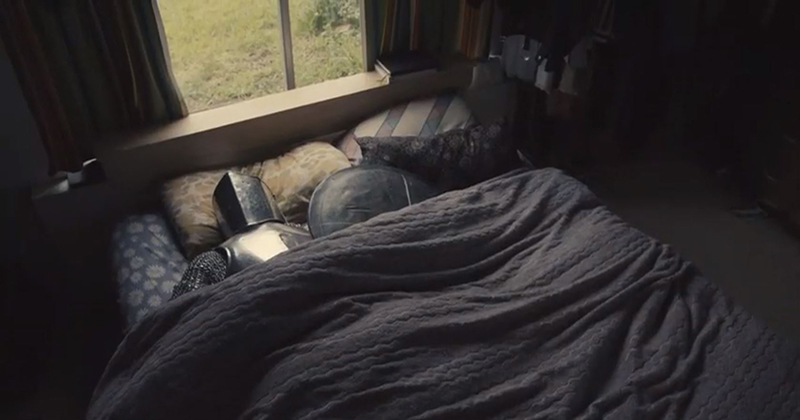 The way the knight neurotically tries to blend into everyday suburban situations and socialise with other characters is sad, yet funny, and its authentic suit of armour acts as a smart metaphor for the walls people build around themselves to buffer them from social exchanges, and the harshness of the world. A particular scene at a bus stop shows the knight draw up a shield between itself and an unsuspecting bystander, another scene later depicts a failed attempt at bar etiquette, particularly at talking, drinking.

Sayaman explains: “The armour represents the dissonance between wanting to feel connected to others and a desire to protect ourselves. Also, the shield was used to show the barriers that we create.” Shots of the knight in public settings such as on a train or sitting at a bus stop come across improvised and documentary-like, evocative of the early 60s work of French New Wave filmmakers such as Jean Luc Godard and Francois Truffaut. 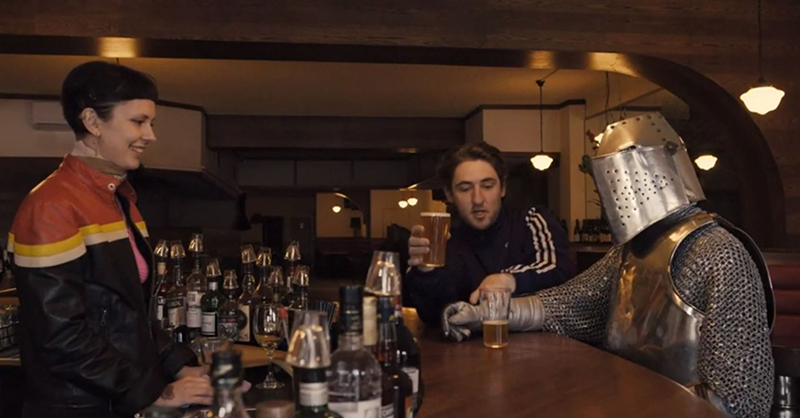 As it turns out the video was filmed and produced under the influence of the Dogme 95 manifesto, championed by Danish enfant terrible, Lars Von Trier – a movement which sought to “purify” filmmaking through the taking on of practical tenets such as on-location shooting, hand-held camera and a steering clear of genre tropes such as murders, weapons, etc. Sayaman describes the approach: “We took some inspiration from Dogme 95. It was winter so Melbourne weather made things a little unpredictable so we relied on natural lighting, no props and shot with a minimal setup so we could move quickly.”

The song itself has a folk and earthen nature which is echoed in the video’s culminating scenes as the knight finds peace and freedom in the lush Australian bush. This idea of our escapism into nature – and its mysterious healing power – seems to mirror the process of filmmaking itself, and watching music videos for that matter, as they are types of short-form escapism that can remind viewers of the enriching rewards of immersion of body, as well as the imagination, into art and the world. Sayman elaborates on the video’s culmination: “Being able to convey relatable experiences. The return to the lush bush was to represent our desire to escape the grind, find some peace, a chance to reflect on what’s important.” 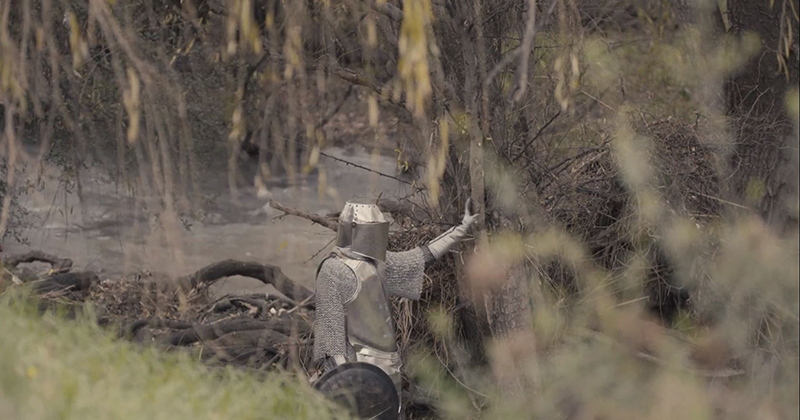 So Danika Smith’s ‘Suit of Armour’ music video proposes a laid-back solution to modern lonesomeness – that is a returning to the mother of all, Nature, where solitude and freedom can potentially be sought, ironically away from the very protections and securities the world has been trying so hard to build up.

Here is the official video for “Suit Of Armour”