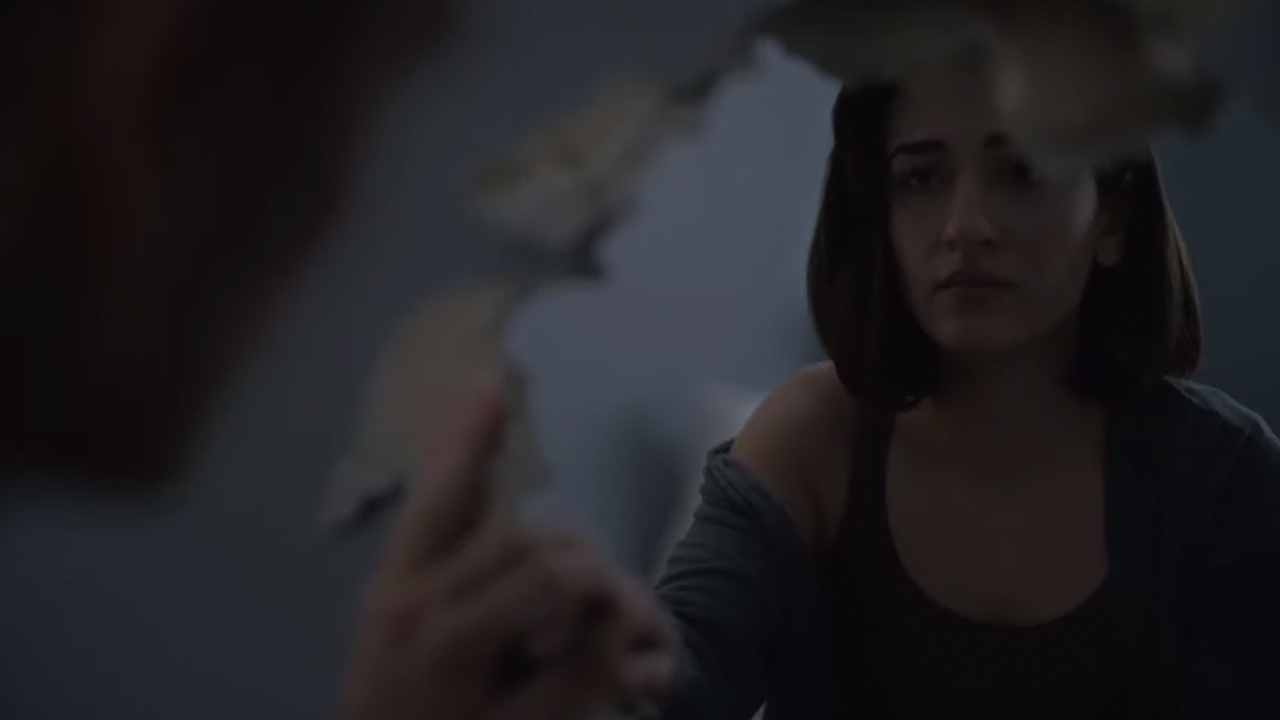 [dropcaps type=’normal’ font_size=’60’ color=’#ed145b’ background_color=” border_color=”]T[/dropcaps]hat hurricane of emotions that surrounds after a break-up, it’s a feeling so many can relate to, yet none can truly relieve. That search for closure that can feel so futile, knowing that sometimes things just take time. It was this near-universal experience that director Jeremy Lindsay Taylor wanted to draw upon in his video for Harrison Storm’s rousing track, ‘Falling Down’. As Taylor explains: “Ultimately, you are trying to establish a connection with the audience. Now, this is an audience that knows, and has strong, personal feelings regarding the subject matter… A break-up. All of us have, right?” 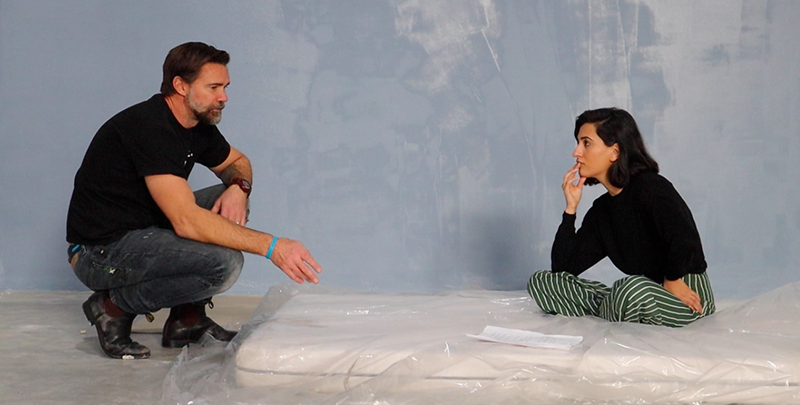 As ‘Falling Down’ swells and evolves through moments of torment and resolution, all coloured by Storm’s incredibly heartfelt vocal performance, our video follows a woman who is going through it all post-break-up. She struggles to come to terms with her experience, at times unable to even leave her bed under the weight of everything. When she is suddenly drawn to the wall of her room, aware of a presence. She takes up a hammer and begins to break through the wall, finding within the cavity a lost ring attached to a string.

As she reels the string in, it is revealed that at the other end is her estranged ex. The two desperately rip away at the wall to reach other, driving towards a cathartic reunification. However, as the couple find each other again, the woman understands that sometimes closure is letting go and she cements their end by returning her ring to her partner. It’s not the fairy tale ending you come to expect, but an approach that was important to Taylor and his crew: “A major goal of ours was to break away from stereotypes that normally portray the female being rescued or powerless. Everyone involved agreed that we wanted our “Girl” to be EMPOWERED! She is courageous in her decision to end the relationship and move forward, as her own woman. The beautiful and intriguing thing about Saskia (Burmeister – Writer)’s script is that we still see that there is another side to this story, another person also suffering but cannot let go.” 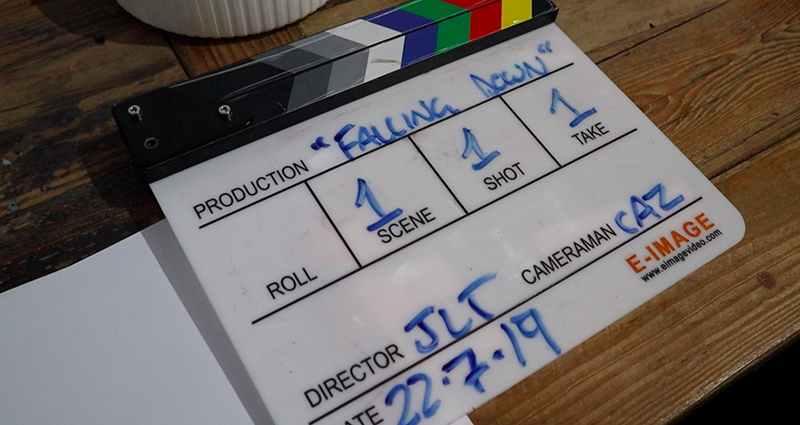 This suffering is so powerfully worn on the face of actor Travis Jeffery, it is crushing. The performances of both actors in this video is truly one if it’s greatest strengths. The lead role is incredibly well-portrayed by Setarah Naghoni. The pure anguish she is feeling as she lays in her bed, remembering brighter times, or tearing apart her home searching for what she has lost, is palpable and brutally relatable. Given Taylor’s long history in front of the camera, we asked what it was like to move into the role of director, to which he replies: “Directing has always been on my radar and I absolutely loved the transition from acting. I enjoyed the process of ‘big picture thinking’ and the ability to be involved in the project on more than one level.”

“The planning, predicting, problem solving and collaborating were all welcome challenges. Clearly, this was made a lot easier thanks to our incredible cast. Both Setareh Naghoni and Travis Jeffery are definitely “Ones to watch!!”. They are fearless, intelligent and emotionally available… What a combination to have access to as a director. This story resonates thanks to their authentic, nuanced and courageous performances.” 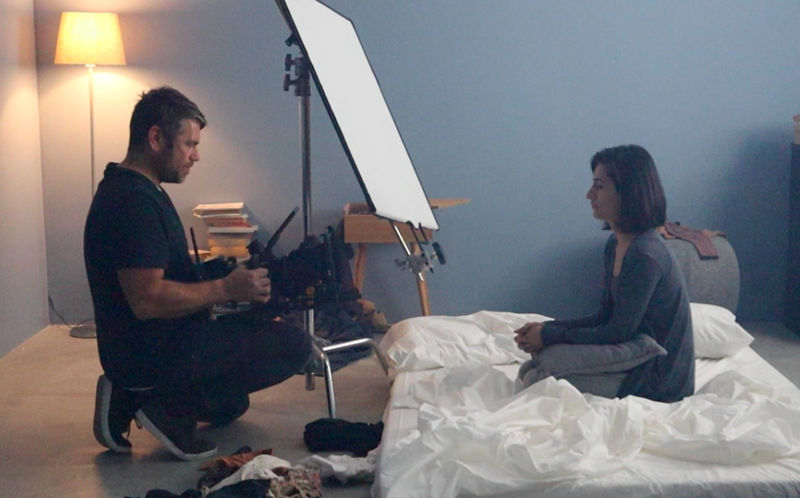 The performances are enhanced by the production of the video, in particular its strong aesthetic. A sombre palette of blues and greys is very rarely punctured by the glimpses of light and brightness that surround the woman’s memories of her partner and their time together. As Taylor elaborates: “There is a lot to tell in a very short amount of time in a music clip. We needed the aesthetic of it to be crisp and emotional. The colour palette helped us tell a great deal about our “Girl” from the opening frame. We wanted the space to represent what she is, and has been, going through. The isolation, the loneliness, the pain and the loss are all emphasised by the colours used.”

“In contrast, we wanted there to be a subtle difference when we see our couple together. A warmth. A lighter, happier feel was the goal. Witness the love… And what was lost. My favourite part of this industry is collaboration. Our incredible DOP, Casimir Dickson, Saskia Burmeister (Writer/Producer), Jamie Croft (Producer) and myself all agreed on the colour palette and its importance. Saskia, wearing yet another hat on this one, chose the wardrobe carefully, adding more depth to the mood and concept we were wanting to portray.” 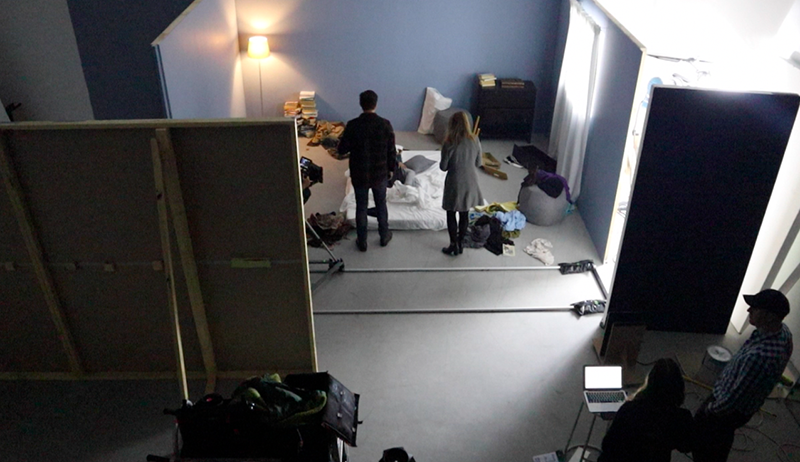 The video’s climax is centred around the emotional beat of the two ex-lovers breaking through the wall to find each other. It’s an incredibly rich series of moments and a wonderful exploration of the metaphorical walls we build around ourselves to survive after a trauma. The actual execution of these shots piqued our interest, especially as the camera tracks across to reveal both characters on either side of the wall. Taylor explains the process: “We looked at locations to shoot in. Real apartments. It just wasn’t feasible… For a one-day shoot, we needed a controlled environment. Hence, we shot in studio. You think you lose something at the time, some authenticity, but everything happens for a reason. It gave us full control over the colour and the lighting, and we got to smash shit…. Without anyone complaining!!”

“Our incredible set builders had the masterful idea of scoring the insides of the wall where we were going to smash through. This made it safer and easier for our actors to navigate. The initial impact was key of course. From there we could shoot progressively. It was a worry point…. But the end result is wonderful. Collaboration.” 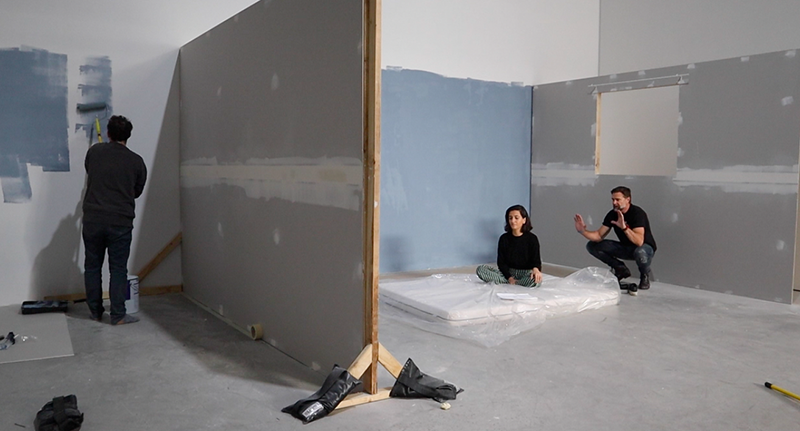 Collaboration is certainly a running theme for Taylor and a massive part of why this video has been so successful. In particular his relationship with the video’s writer/producer Saskia Burmeister and producer Jamie Croft, both of whom share a long and storied history with Jeremy Lindsay Taylor in the acting world. Taylor explains: “I have been close friends with Jamie and Saskia since we did Sea Patrol together back in 2007. They are not only wonderful artists, but beautiful, caring human beings. We have always wanted to collaborate on something together, knowing that we are all on the same page.”

“The first time Saskia heard Harrison’s ‘Falling Down’ she saw this story in her mind. She penned it beautifully and they asked me to consider directing it. On the first read I was in… No hesitation!!! Both the song, and the story, resonated with me. There is a respect and trust between the three of us that made the journey fun and the end result possible.”

Here is the official video for “Falling Down”