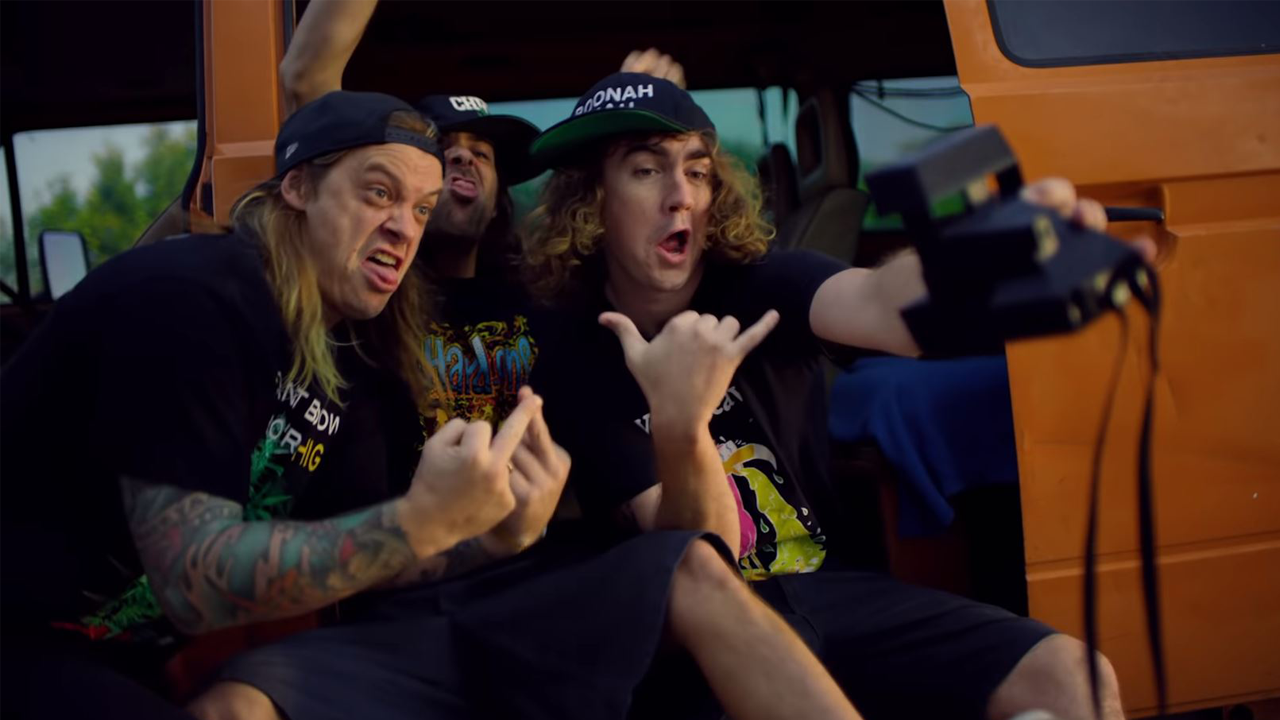 While many bands in the world would love to be seen as the fun party band, very few achieve that status with the authenticity that Dune Rats do. To them, the pursuit of the good time comes with no pretence or imitation, they just legitimately seem to be fun dudes who refreshingly don’t take themselves too seriously. 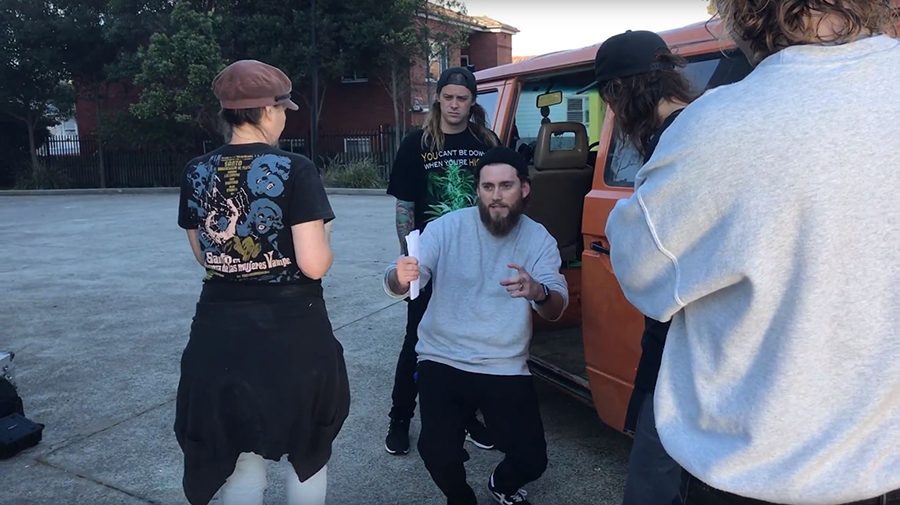 When the video for ‘No Plans’ opens, we find the band right where you would expect. Sitting in detention, being berated by some stuffy-ass teacher, sniggering and mucking about as he lays it on them for having no dreams or aspirations. We then transition into their shared fantasy world of touring, having fun and hanging out, a fantasy that Dune Rats are all real world living every day.

When the extended Dune Rats family came together with director James Medlam to start putting the video together, Medlam immediately had some strong influences running through his mind: “When I first heard the track, it kinda took me back to the days of bands like Blink 182 and Green Day being in the charts. It was kind of a crazy era, these punks breaking into pop culture and having the chance to have fun and show off their personalities in their music videos.” 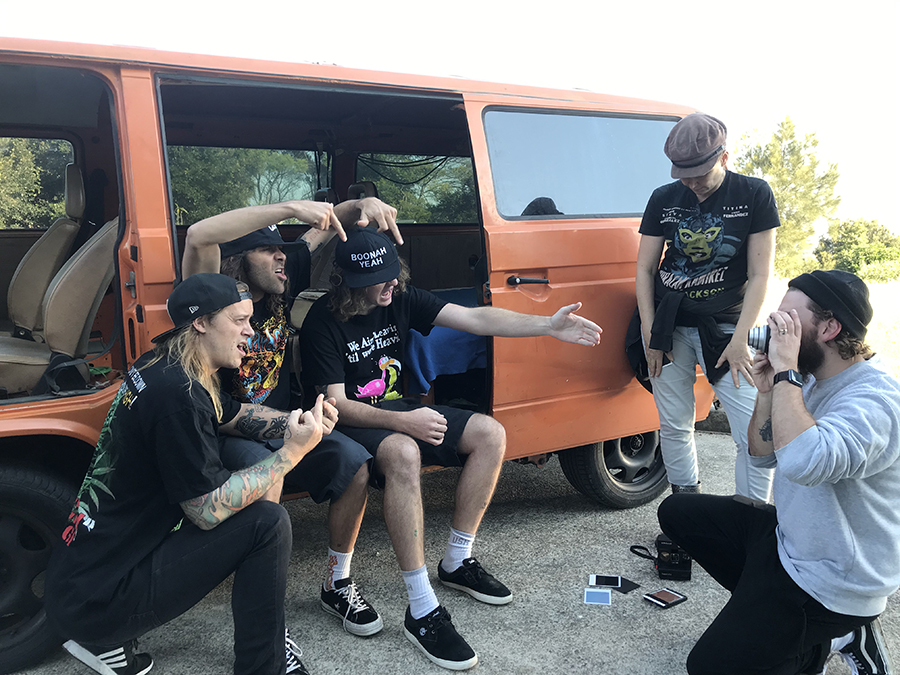 “The guys had a fairly outlined concept, (mainly by Vaughn, the bands pseudo creative director/tour videographer) it was mainly all the van interaction and that they wanted real tour footage to go along with it. After we talked through the themes of the track and what It meant to them, I suggested layering out the music video to how it ended up being… All throughout my treatment was references to Blink 182, Beastie Boys and even some Van Halen (Hot For Teacher).”

The video is mostly centred around the band chugging along in their tour van, horsing around, picking up hitchers, sleeping, whiling away the time. Shot from a stationery camera at the front of the van, the scenes have a comedic feel that is brought to life through the inherent character of the Dune Rats guys. Medlam explains: “A big reference was the intro to “That 70’s Show”. I really wanted to not overcomplicate the shots to give the guys the freedom to have fun. We had lots of props and ideas we bounced around for what we could have them doing behind whoever was singing, but everything you see in the clip is the boys having a blast, trying to be as insane as they could be.” 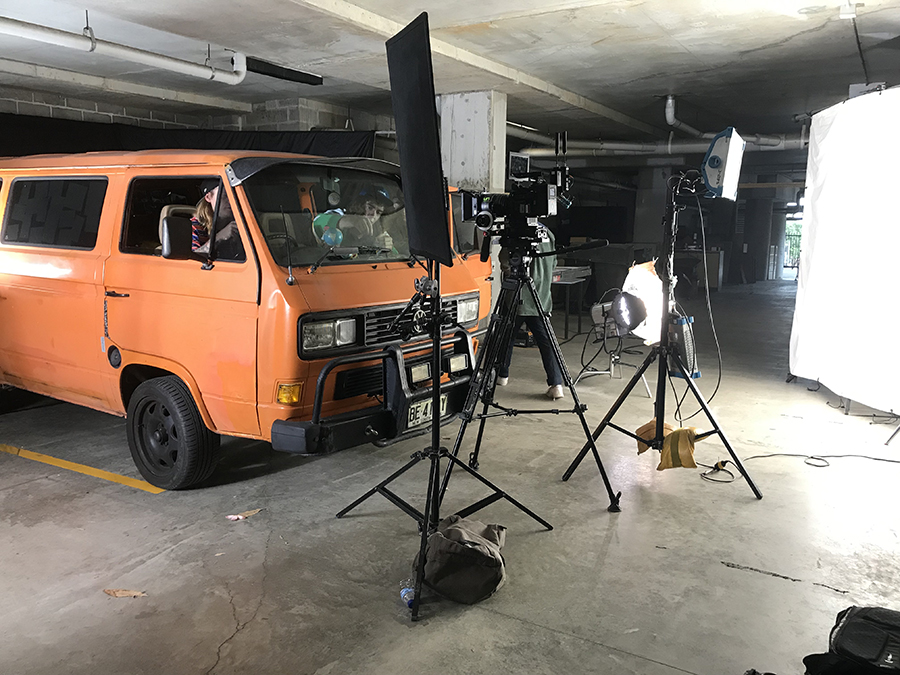 When asked about the practicalities of getting these shots, Medlam replies: “It would have been the funniest thing for anyone to have stumbled upon, but basically we shot this all in the underground carpark at the school. Because of scheduling we had to shoot literally 90% of the music video in one 14hr Day. That was everything except the scale model world which was shot a week later at our art departments studio warehouse.”

“So, we had an amazing Gaffer Alan, who skirted off the whole Van in blacks. We had probably 5 light sources, 3 that were being spun and modified to sell light moving past. We had branches waving, blowers sending air and smoke in, you name it. The boys were selling a lot with their performance, and we added a little camera shake in post to kinda send it over the line. We never wanted it to look 100% realistic, we all loved the fact of it being a little rough around the edges, but this is in daydream land so we had a bit of creative justice with that.” 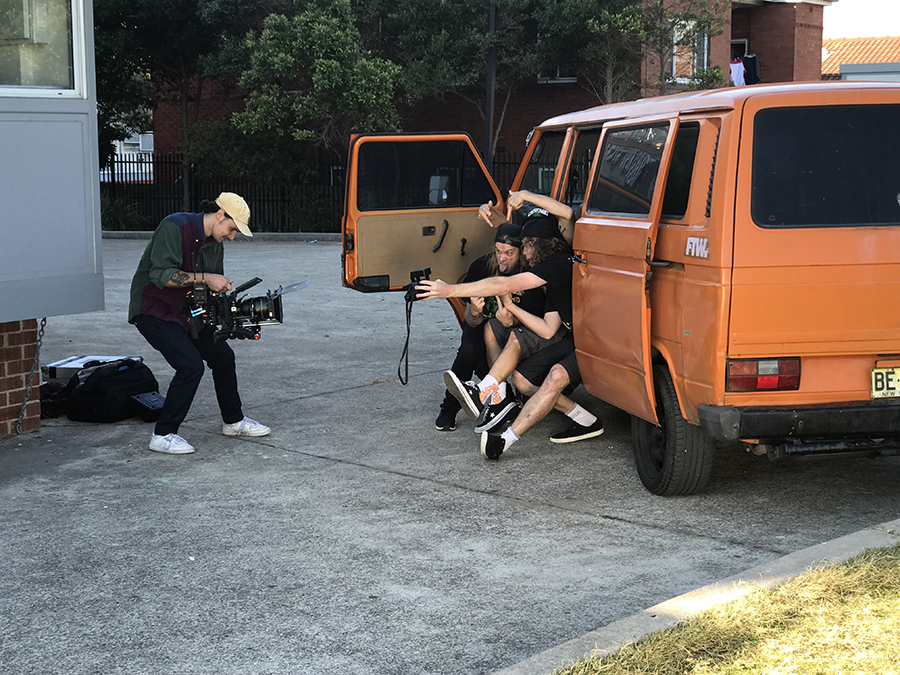 Rather than cutting back to shots of the van hammering along highways, Medlam decided to present the travel segments of the video with minitaures. A little matchbox car van being pulled by fishing line through model train-like settings and environments. It gives the video heaps of charm where just shooting it straight would’ve had very little impact.

And the way Medlam describes it, it sounds like it was a lot of fun to put together as well. “The scale model sequences are in the daydream land of the lads, so we wanted to ground it as if it is a kid’s imagination. Again, we didn’t want it too polished, we didn’t worry about the fishing line being seen. It was kinda all a part of the charm. A big reference was the scene in “This Is the End” where they make “Pineapple Express 2”. The cow scene is a nod to that. I actually loved doing all the scale model sequences, it was super fiddly but a lot of fun.” 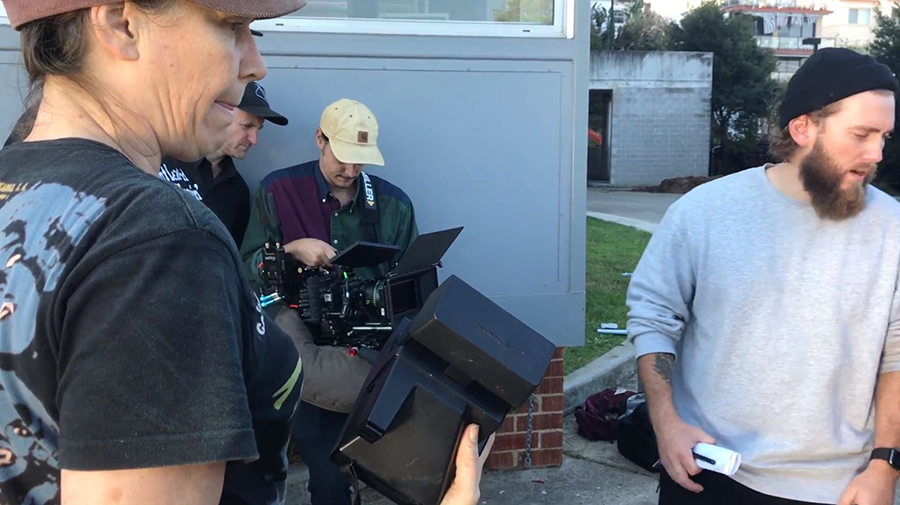 The video frequently cuts away to real tour footage of the band, using the photos that are stuck all over the inside of the van as the transition. It’s a great way of showing off the Dune Rats guys for the legitimately funny and fun guys that they are, while also reminding the viewer that even though this video is taking place in the imagination of some naughty school kids, this is actually how their real life is.

Medlam elaborates: “The track is kind of a nod to how lucky they are that they are living their dreams touring the world with their best mates and getting up to mischief along the way. It’s really a ballad for everyone not caring about the pressure of what they want to do life-wise, take each day as it comes and have fun. Dune Rats have an amazing continual running series on their YouTube channel of all their antics on the road. We wanted it to have that authentic feel behind it, so why not use all their own footage. We were fairly selective of the choice of shots, generic with the theme of hanging out with mates and having fun, rather than really specific band touring footage.” 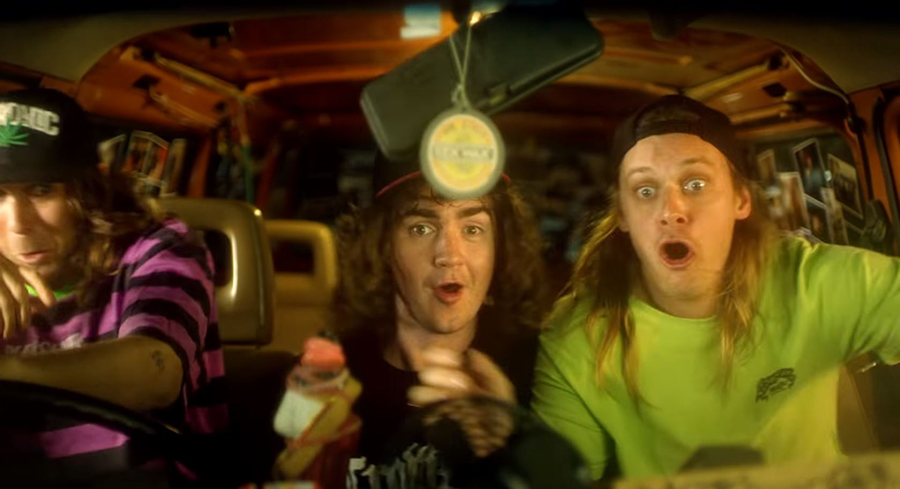 This choice to ground the clip in the actual reality of the Dune Rats really amps up that feeling that this video, while silly and apparently fantastical, really is a glimpse into the experience of being on the road with Dune Rats. In doing so James Medlam perfectly highlights what Dune Rats are all about, taking things as they come and having a good time. “When I met the lads, I knew they were the kinda guys that don’t take themselves too seriously like other musicians. They are super laid-back guys who love to have a joke and put shit on each other, as mates do, but they really have a clear idea of who they are as a band.”

“They have an awesome style that has a retro vibe, but is uniquely DUNIES.”

Here is the official video for “No Plans”