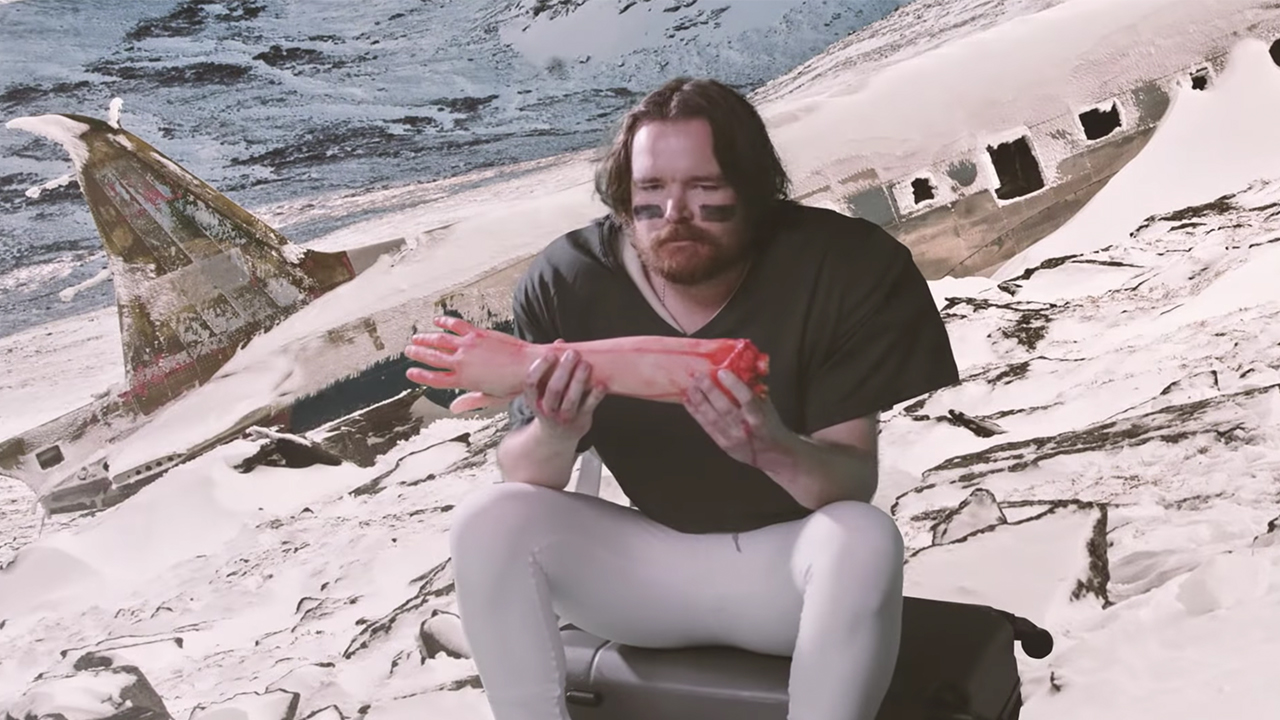 FEATURE: Finn Andrews – One By The Venom (Dir. Alexander Gandar)

[dropcaps type=’normal’ font_size=’60’ color=’#ed145b’ background_color=” border_color=”]I[/dropcaps]f Gandalf The Grey was right and death is not the end of the journey, but instead just another path that we all must take, Finn Andrews has not only taken, but also dug up, repaved, sealed, stomped and danced merrily along said path in his latest single ‘One By The Venom’. Delivered as a series of single line methods of dying, ‘One By The Venom’ lyrically revels in its macabre cheekiness.

Given the acid-tongue in cheek approach and anthological nature of the song, director Alexander Gandar says the concept for the video began to crystallise early on in the process: “It seemed pretty clear to us that literalising the song would be a) heaps of fun and b) a bonkers thing to attempt, in fact so bonkers that it might just be c) heaps of fun.” 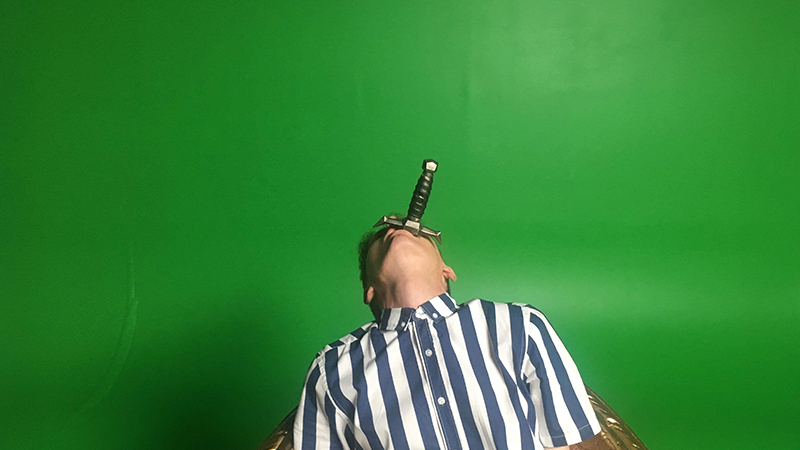 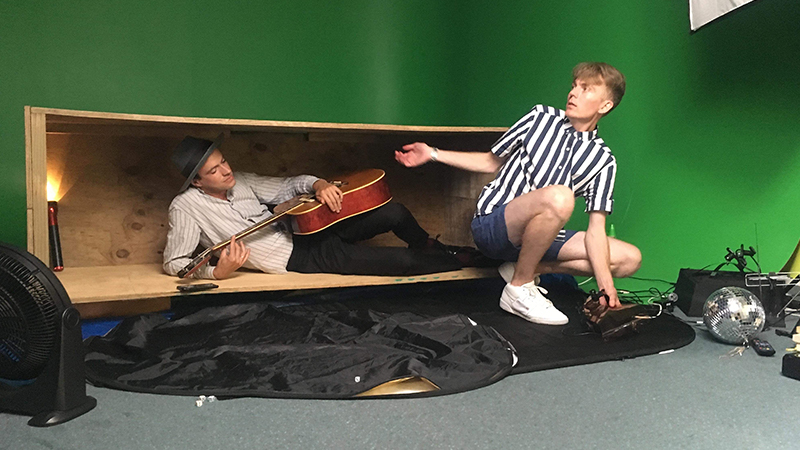 Finn Andrews – ‘One By The Venom’ (BTS Photos by Amanda Robinson)

With the verses of ‘One By The Venom’ being made up of line after line of causes of death, some more cryptic or poetic than others, Gandar and Andrews had to set about conceptualising a shot to accompany each line: “It was honestly so fun. Finn and I both wrote our own list of ideas for each line, compared them one by one and chose our favourite for each, then I plugged that master list into a gigantic spreadsheet of doom, and broke each scenario down to its constituent production elements – shooting format, cast, location, art department, etc. etc. etc.”

“It was definitely our bible but it was also a living document, and it changed a lot over the course of production. If anything felt like it wasn’t earning its tiny amount of screen-time, or we realised we couldn’t tell the story in under two seconds, we’d sit down and come up with something different. I also had to make a little test video to prove to Finn’s label that it wasn’t going to be a complete garbage fire, which taught us a depressing amount about the ridiculous amount of work we’d set ourselves.” 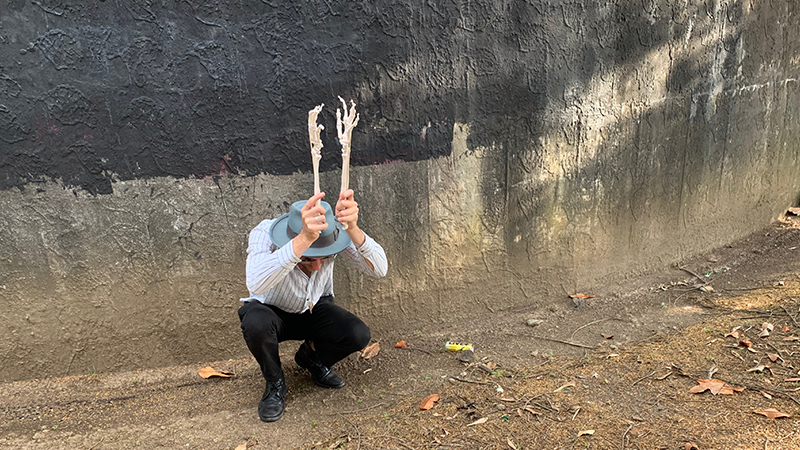 Finn Andrews – ‘One By The Venom’ (BTS Photos by Steve Gulik)

One way the video maintains this desired quality of not being a garbage fire, is the way it regularly returns to a recurring shot of the artist Finn Andrews whiling away his days in a buried coffin. While still montage-like in its execution, using this mechanism to tie the story together in the choruses of the song ensures that it conserves a steady direction.

“We knew we wanted the choruses to bind everything together, and we knew we wanted them to be Beetlejuice-y and properly toe that tonal line between light & dark / comedy & tragedy, but we had a surfeit of ideas about how to do this. “Zombie Finn in our high school’s First XV” was another strong contender, but after several brainstorms we found our way to “Finn in a coffin watching all of the chaos unfold”, which became “man in hat fundamentally misunderstands death”, which we both thought was hilarious.” 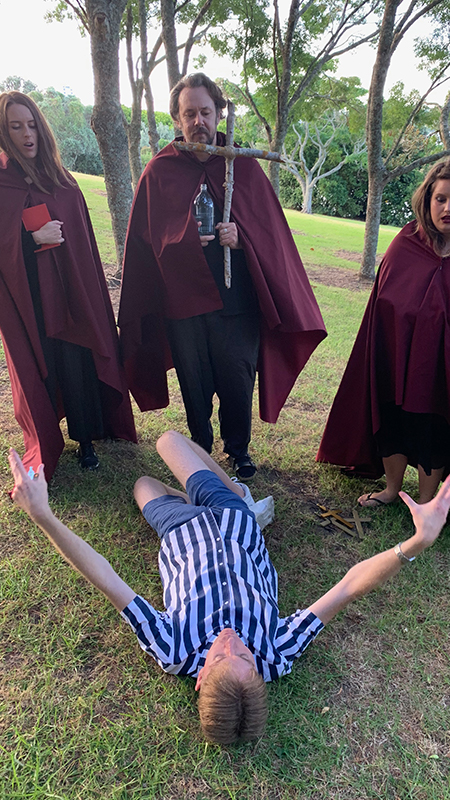 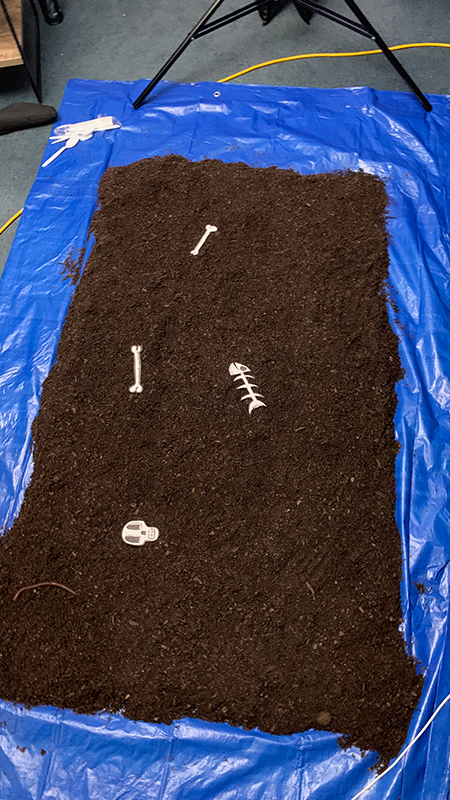 “We scribbled out a long list of the most absurd things you could do in a coffin if you’d somehow missed the memo on what death is supposed to be, filmed pretty much all of them, and sadly had to leave heaps of good stuff on the cutting room floor. I can’t remember which of us came up with the disco ball, but I reckon that one in particular is *chef’s kiss* wonderful.”

Not only is every line of this song accompanied by an entirely separate scene to any that proceed it, but each scene is delivered in its own filmic style, often dramatically shifting in tone, genre or even into a completely different medium. When asked about just how massive an undertaking this must have been, Gandar replies: “It was colossal. And silly. So silly.” 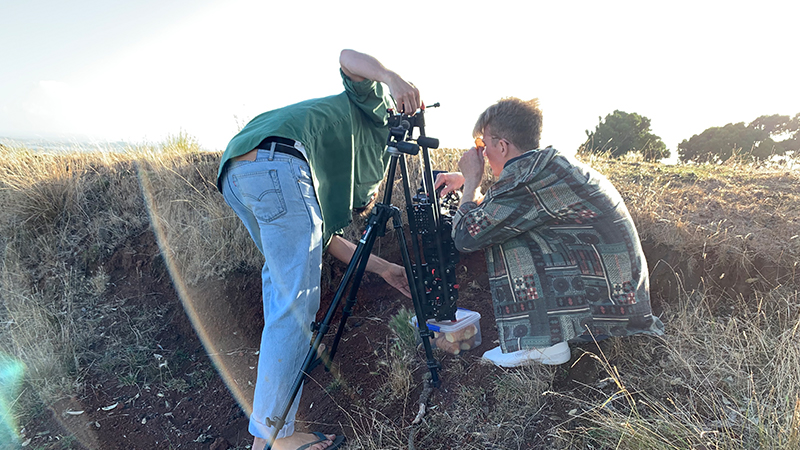 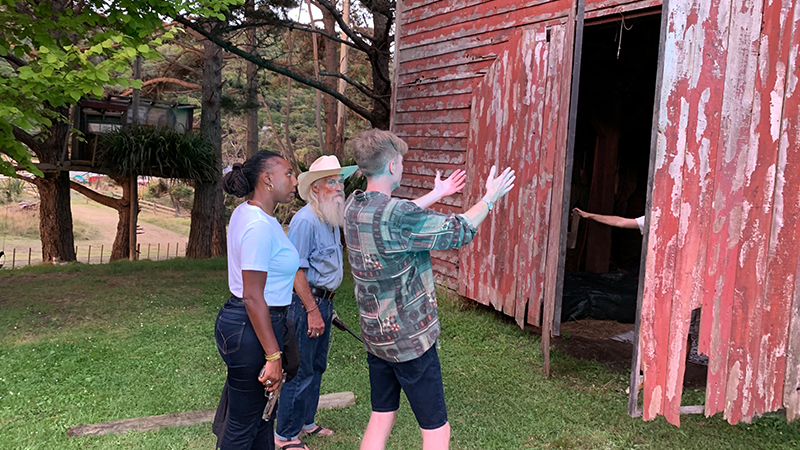 “We also had a very limited budget (because when do you ever have money to throw around on a music video) which made it even sillier, but we knew that for it to work it had to feel like a real encyclopaedia. Any time I would try to get all production-brain on it and start condensing things for ease, my DOP – the genius Tim Flower – would patiently put me back on track. Tim was a real advocate of keeping it as varied as possible and having a play with a whole bunch of weird shooting formats, which we managed to do as much as possible (though still not as much as Tim would’ve liked, sorry Tim).”

“My usual music video approach is “one location one day one crew”, but that was clearly not going to fly here. Luckily Finn’s album was still a ways away from being released, so time was the one currency we were able to spend freely, and we knew from the jump that we’d have to spread the filming over summer and just tick things diligently off that spreadsheet. We first compared our death-lists in September last year, and the video came out at the end of April, so that’s about seven months from whoa to go. There were obviously times of idleness and times of intensity within that period, and we all had other projects on the go, but it’s still easily the hardest I’ve ever worked in terms of the ratio between effort exerted and resulting screen-time (a swift 2 minutes and 47 seconds).” 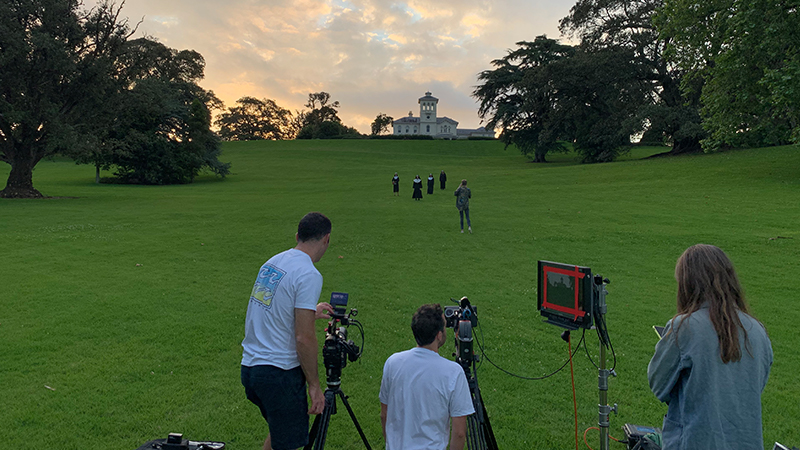 In order to achieve this encyclopaedic stylistic vision, Gandar enlisted the help of multiple collaborators, from actors to animators and illustrators, resulting in the YouTube notes for the video reading more like the back of a compilation album.

When asked about this process, Gandar replies: “I guess the short answer to this is: I did a lot of emailing. But y’know, hoovering people into our tornado wasn’t actually too difficult, and I think that’s partly because we deliberately kept the crew really light, which was again just out of financial necessity. “Less people doing ridiculous amounts of work” was our inexorable ethos, and without Tim and my co-producers Tom Augustine and Amanda Robinson (both very talented creators themselves), we’d probably still be making it.”

“It’s here that I have to shout out my guy Steve Gulik from The Post Office – part of me feels like I should just credit him as the one solely responsible for getting the thing done. He helped on several of the shoot days, gave me access to all of his gear, graded the entire thing (a unique look for every scenario!) AND did every frame of VFX, all for what was essentially a pocketful of change. If there’s a special place in heaven for people with generosity of spirit, Steve will be mayor of it one day.” 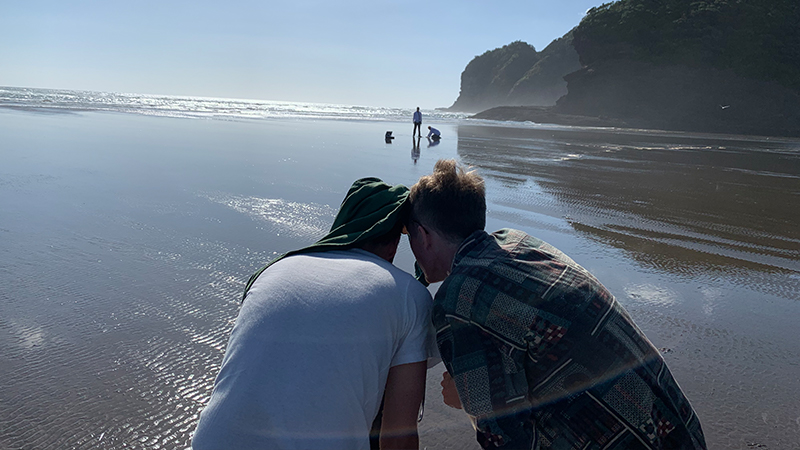 “But yeah, we definitely needed a lot of actors, and we put a lot of thought and time and energy into casting. Heaps of our friends and family were involved at all levels – our partners Frith and Helen are probably the uncredited producers, both of our mothers really pitched in, our dear friend Ritchie built the coffin, my sister Rosaria drew the Fight Club insert, one of our great friends Liam did the incredible charcoal illustration (animated by our other pal Cam in Australia), and Liam also played a cowboy with Tom and with our other great friend Justin, who also played another role in another verse… and this is barely the beginning. We truly wove a web from favours. And now I’m just gonna spend the rest of my career paying everyone back.”

‘One By The Venom’ has been selected in the Top 40 Finalists at CLIPPED MUSIC VIDEO FESTIVAL, happening on June 15th at SUNSTUDIOS in Sydney.

Here is the official video for “One By The Venom”