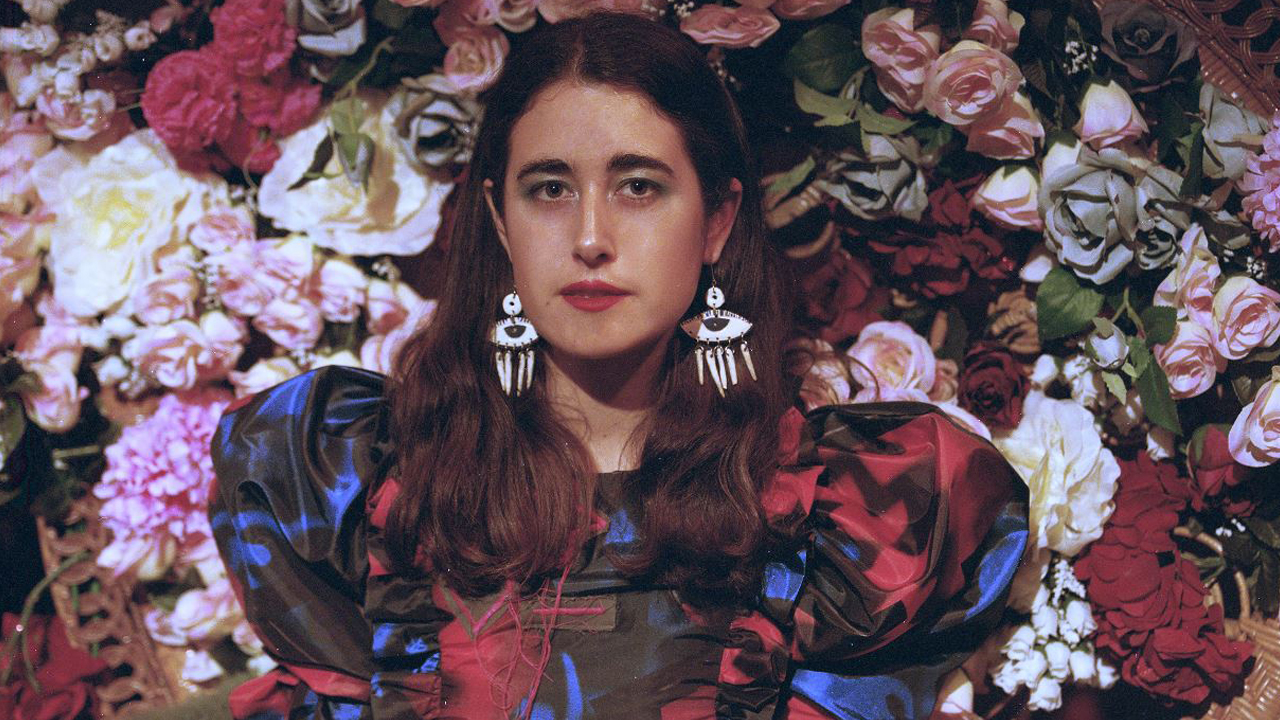 [dropcaps type=’normal’ font_size=’60’ color=’#ed145b’ background_color=” border_color=”]T[/dropcaps]he delicate balance of strength and vulnerability, evident in Grace Turner’s latest single Easy I Fall, is so eloquently displayed in the accompanying visuals, co-directed by James Rhodes and Turner herself.

When going in to film “Easy I Fall” at one of the last remaining bastions of independent art and theatre in Newcastle, the aptly named Royal Exchange, Turner had a very clear goal in mind. “I was trying to emulate the idea of the goddess. I wanted to take back the power of being on show and being beautiful, play with that idea and turn it on its head.”. That powerful energy is certainly present in the video, with Turner exhibited in front of regal red drapery, often sitting on a throne of flowers. 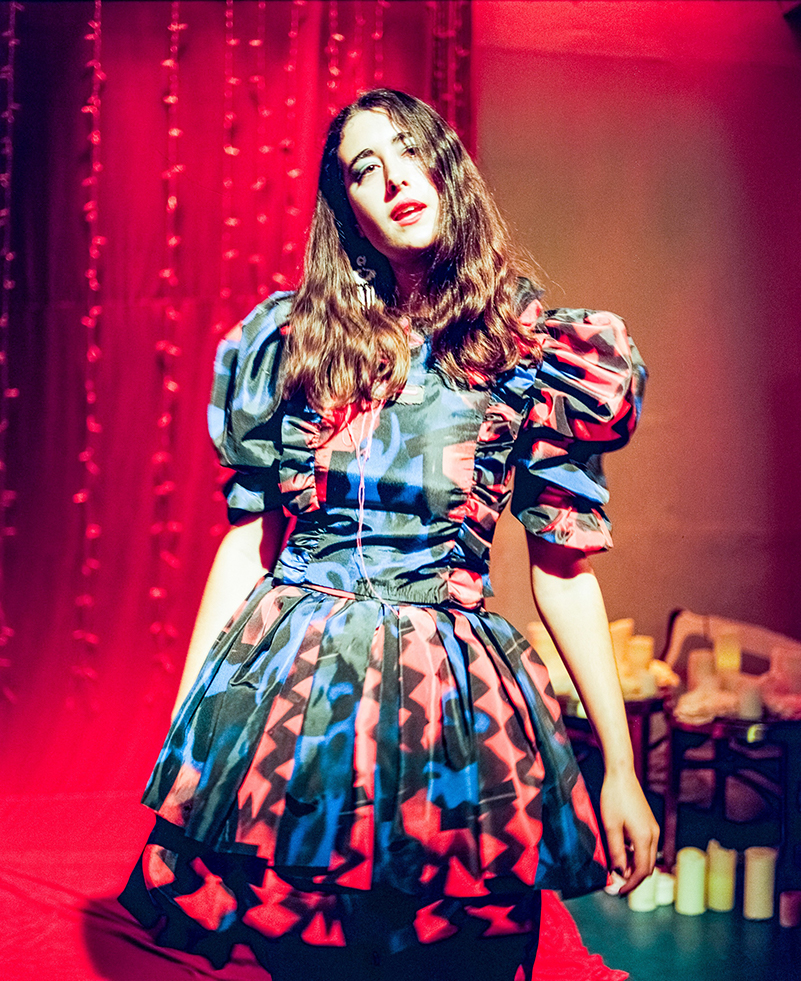 However, among this steely strength, we are introduced to other sides of the artist, one of an almost mischievous exuberance and also that of someone really putting themselves out there. “I wanted the film clip to be both serious and playful, as I feel these two characteristics are prominent in my music. Staring straight down the camera created vulnerability and I knew I wanted to enhance the intensity of the first line with that shot.”.

Turner’s vision for what she wanted to achieve lead her to Newcastle artist and photographer James Rhodes. “James and I had done a photo shoot together and I liked the easy feeling we had together. When we’re working it’s just like we are hanging out, there isn’t a barrier between us and the camera. This is an important feeling for me to have as I want to capture the real essence of myself, not a contrived “performance”. When I told him about my pretty vague concept, he was straight on board and happy to experiment with me.”. 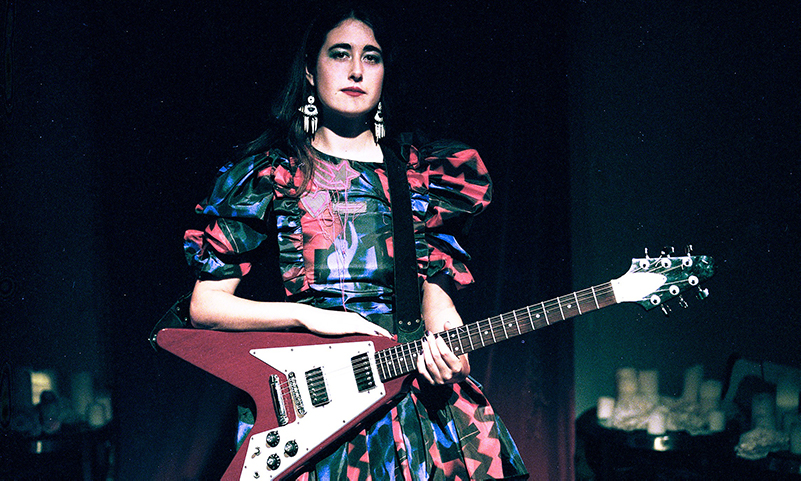 Rhodes’ work within the visual art space often sees him playing with the form, taking a unique approach to form and perspective. That creative touch is definitely evident in the way this video was shot, in particular, the decision to shoot on Super 8 film. On this, Turner says “The decision to use Super 8 came about as I knew I wanted to do a clip that was more “immediate” and not as polished as my last video.”.

The effect achieved with this film choice is one of the strongest features of the video, giving the whole project a kind of vintage authenticity. It feels like nostalgia, and 60’s home movies. However, while incredibly effective, shooting on this medium brought with it certain challenges. “The biggest challenge was that I hadn’t prepared for how long it was going to take to get developed. I really wanted the song out by the end of the year and we had cut the timing very fine. It took 6 weeks to develop it and only one day to shoot and edit. The other challenge was that each scene I only had one shot at it. The scene where I eat the rose, for example, I only had one rose and knew I had to nail it. There was no practice run- and I had never eaten a rose before!”. Turner, however, was welcoming of the shift in approach that was required, continuing “I really liked the challenge, it’s like a live performance – you have that one moment to get across your emotion and I think it made my performance very real.”.

It would be impossible to examine this video without making special mention of the wardrobe Turner dons throughout, which wonderfully enriches the unmistakeable classical elegance of the clip. “I am very lucky to be surrounded by some very talented women in my life. The dress I am wearing was made by Millie Shorter. It’s from a collection of hers called “Dolly Takes A Trip” a psychedelic country vibe.”. Turner continues, “The earrings and necklace I am wearing are made by artist Ellie Hannon. I’ve always been a big admirer of Ellie’s work and knew I wanted those eyes watching throughout the video.”.

As with any successful piece of art, there has to be this almost perfect storm of collaboration. Sometimes it takes years of preparation, but other times the pieces just fall together. Turner seems not surprised, but certainly delighted that this was the case when shooting “Easy I Fall”, saying, “We did pretty much no prep for it. It was all really spontaneous. After we did the shoot in the theatre, we knew we had enough to make the video.”.

These sorts of things, while somewhat miraculous, can never truly be accidental. In the case of “Easy I Fall”, it would appear that the success can be brought back to many factors, but in particular the collaborative relationship that Grace Turner and James Rhodes share that gave them incredibly stable foundations to build off. As Turner put it, “James gave me space to explore my ideas, there was no pressure and it was really fun.”.

Here is the official video for “Easy I Fall”