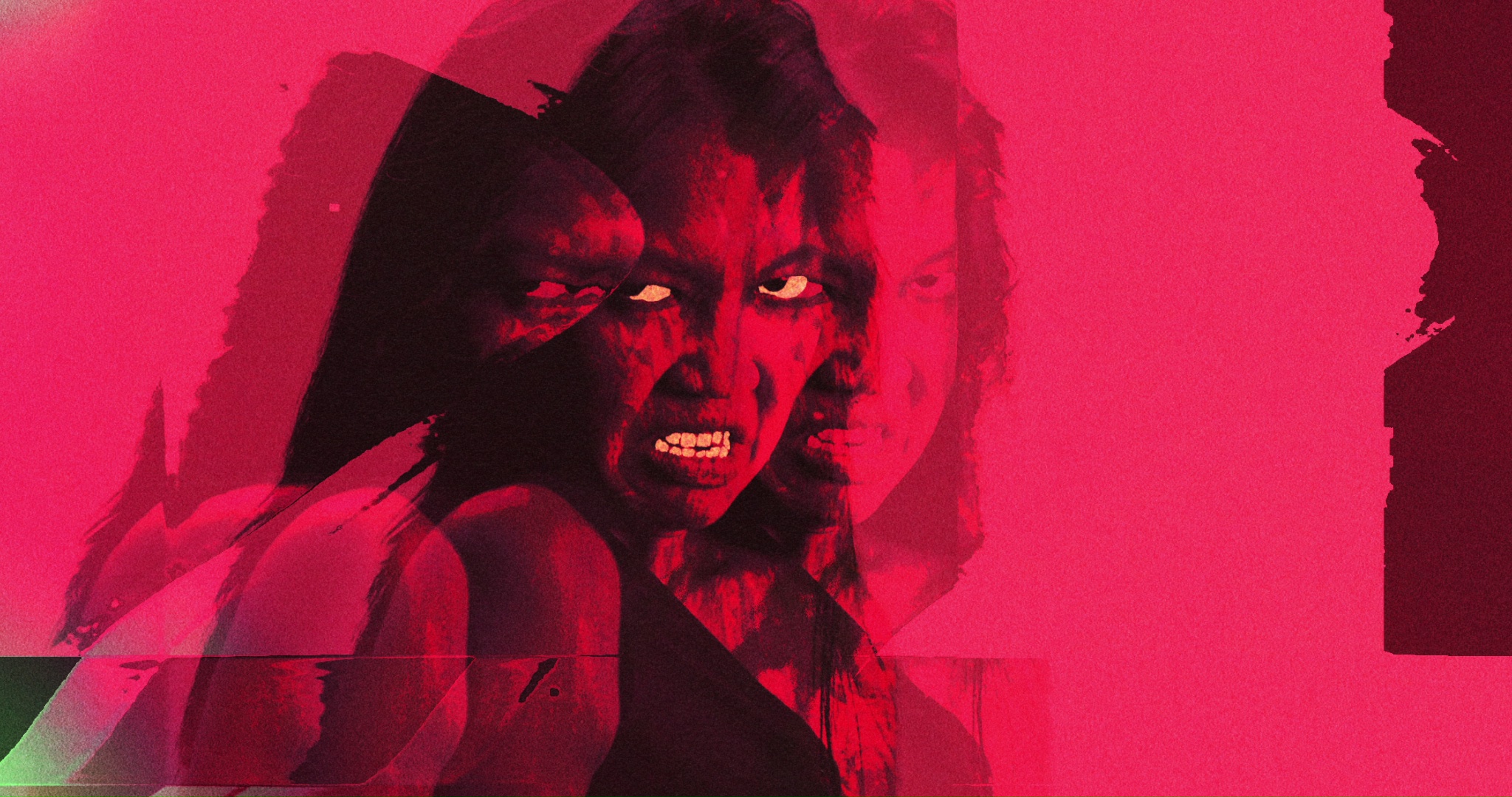 [dropcaps type=’normal’ font_size=’60’ color=’#ed145b’ background_color=” border_color=”]T[/dropcaps]here are few people in the vast world of heavy music that command a presence even close to that of High Tension vocalist Karina Utomo. The power of her performance, both on the stage and in the studio, matched with the barely controlled chaos of their music, has helped to garner High Tension a reputation as one of the most important acts going right now. 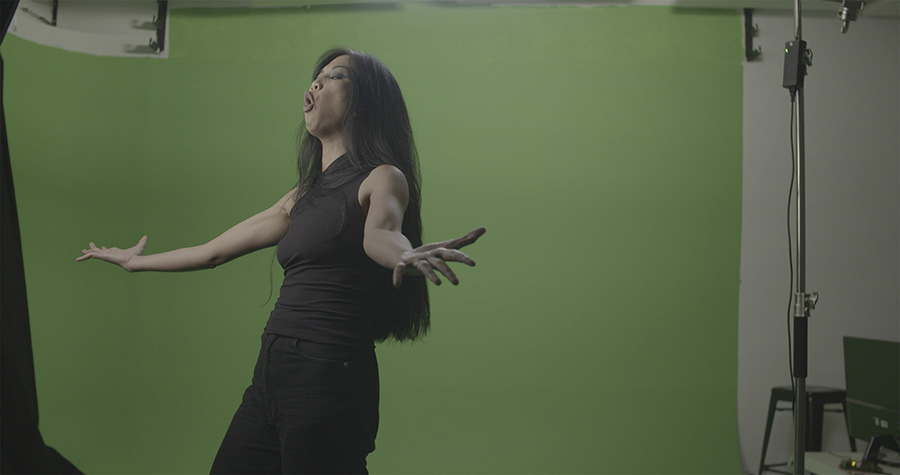 Given the fire and character in Utomo’s performances, it makes perfect sense that High Tension’s latest video for ‘Veil´ be centred around her and a series of extreme and explosive animated accompaniments. However, as animator Carl Whitbread explains, what we see wasn’t always the exact plan they had in mind: “Initially when Matt (Weston – High Tension bass player and film director) approached me about doing a High Tension clip, it was pretty much a case of seeing what we could cobble together with limited time and budget, knowing that Matt could shoot Karina’s performance if I needed. Karina sent me the idea behind the track ‘Veil’ which is the concept of the Jinns. Jinns live beside humans in a parallel universe, and some can cross over to the human world & shape shift.” 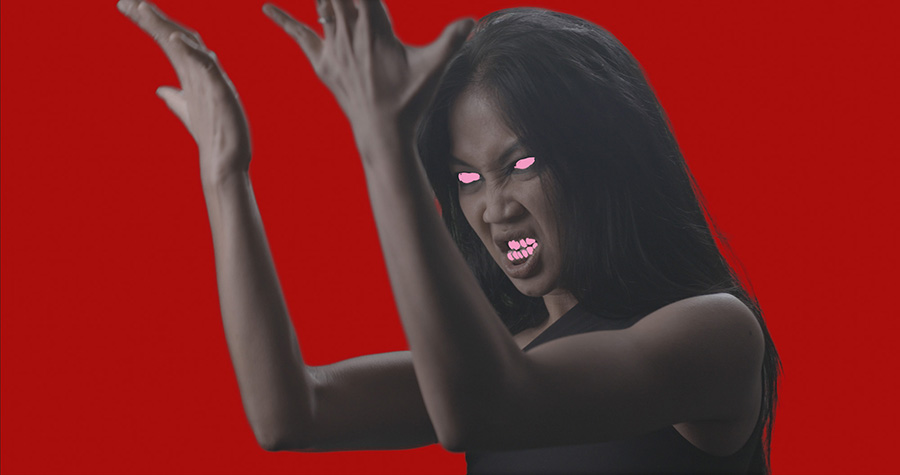 “Initially my idea was a bit more narrative driven and literal, with Karina’s head floating above a weird desert with objects scrolling past (in the vein of Bjork, Earth Intruders) – which would then have her transform into the Jinn version of herself by the end of the song. The band preferred a more subtle interpretation of the theme and wanted something a bit more dark and intense. I also realised my initial idea would take much more time to animate.”

“After throwing some other ideas around with Matt we decided he should just shoot a full performance of Karina, then I would basically play around with elements/textures/hand drawn bits on top of it – a bit of a free-for-all approach, using the work of Ruffmercy as a source of inspiration. It was nice just to experiment and not be locked down to a strict storyboard or script.” 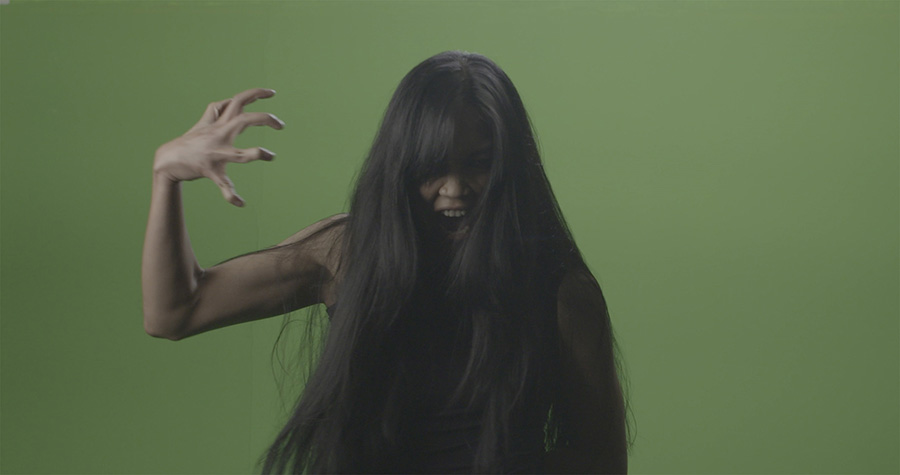 The video consists of footage of Utomo performing the song in a studio, shot by Matt Weston and DOP Ben Blenner, layered with all manner of brutal and demonic colours, patterns and effects. The produced look is somewhat similar to rotoscoping, with the overlaying of animation over video footage. When asked about the process of putting these images together, Whitbread replies: “Luckily Matt and Ben are absolute legends and not only provided me with a Premiere file with all the takes cut and synced, but Matt also did an initial edit which obviously saved me a huge amount of time. I ended up changing a couple of small things and adding more some more shots towards the end but the majority of the edit was essentially Matt’s work.”

“I was a little ambitious at the start and had planned to frame-by-frame hand draw the majority of the elements over the footage. Once I realised not only would this take huge amounts of time but I would probably end up going insane by the end of it, I figured I could emulate this by layering up different textures and footage with random motion and slower frame rates, as well as random displacement maps set to different blending modes. I probably had about 8-10 layers of elements in total, and it was a matter of switching them on and off at different times and in different combinations. I also ended up doing a bit of frame-by-frame hand drawn stuff on her eyes and teeth as a final touch.” 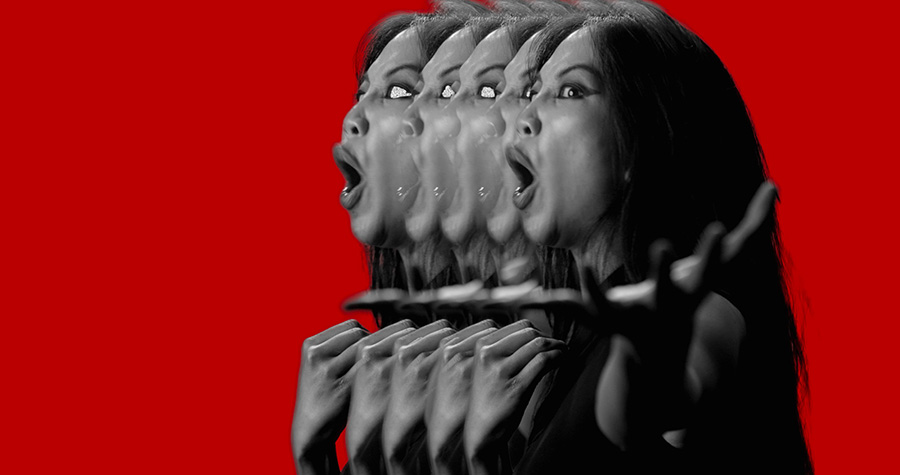 The use of varying textures, from inky black, to licking flames, to this almost vintage parchment feel at times, matched with the bold colour palette of reds, blacks and yellows, makes for such an intense viewing experience, very much in tune with the unbridled an unrelenting nature of the song. The whitening of Utomo’s eyes and teeth, an effect similar to one employed by Carl Whitbread in his video’s for Lo!’s ‘Gods of Ruin’ and his CLIPPED Music Video Awards 2019 nominated video for ‘Fear’ by Cursed Earth, has such a profoundly unsettling feel so characteristic of his work that I feel no hesitance in dubbing the effect as Whitbreadian. 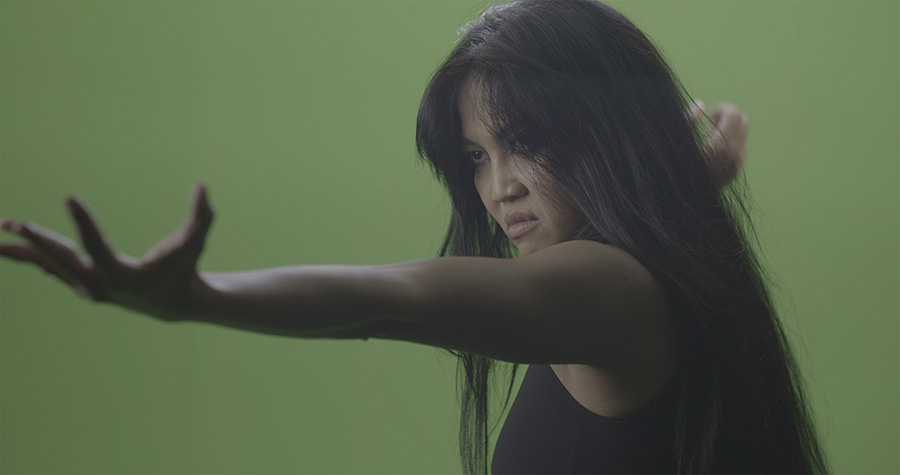 Given the niche Carl Whitbread is carving out for himself with this grim and foreboding animation style, it’s plain to see why Matt Weston and High Tension sought his collaboration on this video, with the end goal of capturing that intensity so evident in their music. When asked if animating over somebody with such a massive presence as Karina Utomo made his job any easier, Whitbread replies: “100%. She is such an animated and ferocious performer. Once I saw the initial footage I felt like most of the job had already been completed. Her gestures and facial expressions definitely dictated a lot of the final animations and helped me come up with some interesting ideas such as the ball of fire in her hand for example.”

Here is the official video for “Veil”