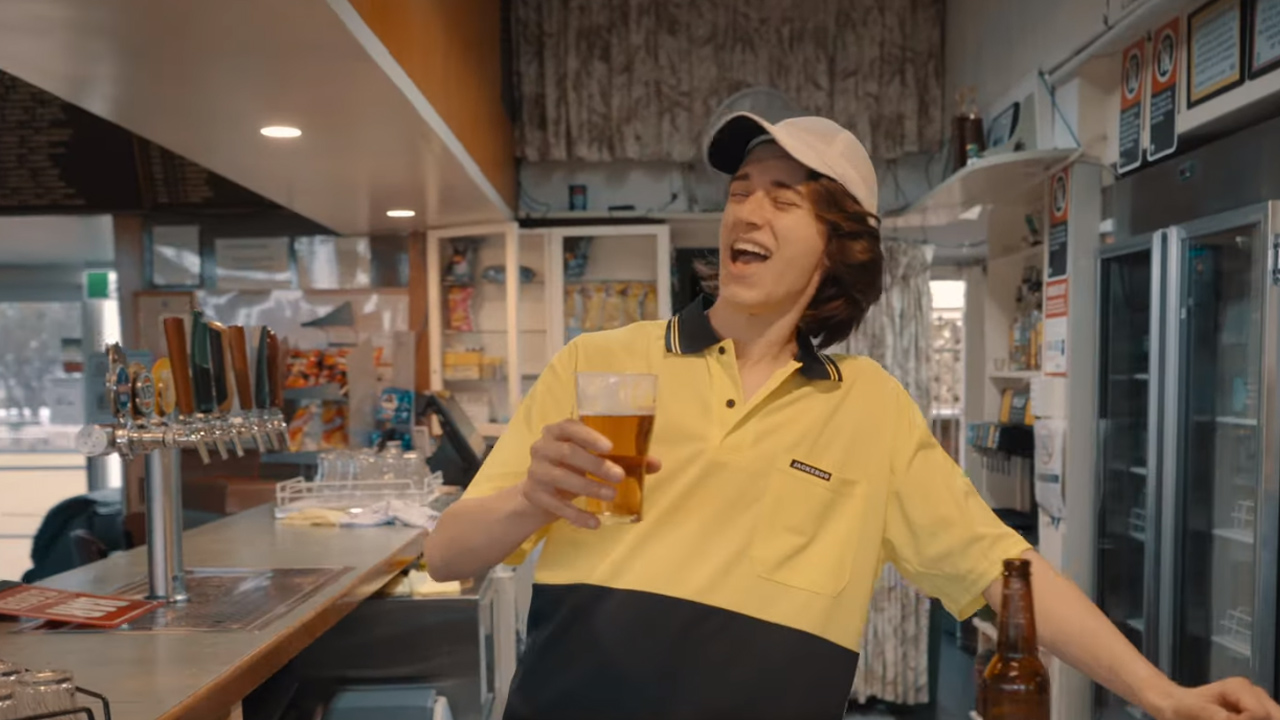 [dropcaps type=’normal’ font_size=’60’ color=’#ed145b’ background_color=” border_color=”]S[/dropcaps]omewhere in Australia right now men and women are gearing up to play lawn bowls. Through the smoke, heat and sweat of the end of the year, you can bet that turf is being trimmed, beer cooled and balls shined. While communal centres are being commercialised and heritage buildings and entertainment venues gentrified and converted into frozen yoghurt eateries, the bowl-o is one of the lasting vestiges of community culture that has not sold out to the Big Man, today being used for parties, punk gigs and, of course, the bowls. The new music video for Jackson Carroll’s ‘Happyman’, directed by Joel Bryant, situates itself right in the club action, capturing the artist as he tries to juggle performance, hospitality and the respect of the bowl-o patrons.

The video, shot entirely in the Cronulla Bowl-o, craftily stitches steadicam shots together to create the illusion of a one-take shot, enabling Carroll to be dressed in various attires and perform activities as he weaves in and out of frame. Bryant explained that he “pulled these transitions off by framing the same shots between takes,” which allowed him to “tweak the speed and position of the two clips to blend in editing.” Bryant said that “Keeping a subject in mind (such as the clock in the first transition), I aimed to end the first shot and start the second shot with it centered in the frame. The editing was made easy thanks to this.”

The way the camera moves around the clip gives the ordinarily simple and spare set up of a bowling club a multi-dimensionality that shows the venue in a new light, building momentum through the one-take technique and drawing in the viewer’s attention to see what happens next. Whilst planning the video, Bryant was sure to keep a focus on movement to give vitality to the images, saying that “I was sure I wanted to incorporate motion into the shots, as otherwise the video would lack momentum and flow. Using the one-take approach, I was able to add plenty of camera movement with the help of a camera gimbal, to reveal the many aspects of the club, assisting to capture viewer’s attention.”

Pulling off multiple takes of the same shot, with different events unfolding in each, is testing enough with a static camera, let alone having it moving continuously on a detailed floor-plan such as it is in ‘Happyman’ – where the actions of camera operator and actor require thorough coordination. Through ingenuity, Bryant actually managed to improvise his plan of shooting on the day: “Before the day of the shoot, I hadn’t ever been to the club before, and had no way to plan anything out. Once I arrived on the day, I took note of my surroundings and started to see an interesting direction of which I could shoot the video. Starting with the far couches, I created a line of sight towards Jackson as he sung near the front of the club. After this I basically pushed the movement on towards the bar and so on, following Jackson as he played the roles.” Bryant said.

Being a cultural spot for sports, community and music, bowl-os across New South Wales, especially in the inner cities, have become authentic shooting locations, and videos such as ‘Like Soda’ from Violent Soho have gone as far to include extras playing patrons – ‘Like Soda’ in particular is a funny send-off and tribute to the untold Aussie legends, and Carroll’s ‘Happyman’ does a similar service. For the director, filming in the club would bring a genuineness to the visual, explaining that “in the search to find a location for the video, the club was recommended to me by a friend Luke Carra, who thought the dynamic of an old Australian Bowl-o would be a perfect fit for our half planned ‘bartending idea’. On arrival at the club, I was sure the video would capture an aspect of Australian culture due to the raw look of the place, from the names on the walls to the dark wooden tables and benches.”

In ’Happyman’ Jackson Carroll uses his musical and hospitality abilities to cater to many different jobs and requests – such as barbacking, food service and performing. Carroll’s multi-tasking is accentuated through the video’s accumulative momentum, and the idea itself, of the ‘everyman doing everything’, calls to the fraught nature of creative pursuits, for today it is economically harder than ever to get a start and make a living as a musician, or in any creative industry, where the inconsistency of work in the gig economy has created a new precarity for artists and performers.

However, in ’Happyman’ Bryant reminds us of the nature of perseverance and good faith, stating that “the idea of creating a character who seems a ‘Jack-of-all-trades’ came from the want to show that no matter what title you have, it’s always possible to live with a smile and enjoy what you do. Although I do view income as a necessary resource, especially for a full-time freelancer, the passion needs to be there when it comes to a project. If I’m not passionate about the work I’m doing, then I won’t do it. I find if you’re passionate about the work you’re doing and you fully enjoy it, then you’re in the right place.”

‘Happyman’ also captures elderly patrons, which is something music videos, especially from younger artists directed at younger audiences, rarely do. There is an ageist trend in popular culture to exclude older actors from productions and stories, probably in fear that it would detour audiences. Yet Carroll’s new video – as well as a host of recent popular films such as St Vincent and Going In Style – welcome a blend of young and older characters into the work with humour and charm. Both Bryant and Carroll sought this genuineness in their depiction of the bowl-o atmosphere, Bryant affirming that “the inclusion of older people in the ‘Happyman’ video was brought about by Jackson, as he had a strong vision for the project. It would be a mislead to show younger people in the club, as the majority of club locals are older, and have been going there for years. Bringing them in to act was essential in keeping the video as authentic as possible, and to show the true Australian culture associated with the Bowl-o.”

Here is the official video for ‘Happyman’