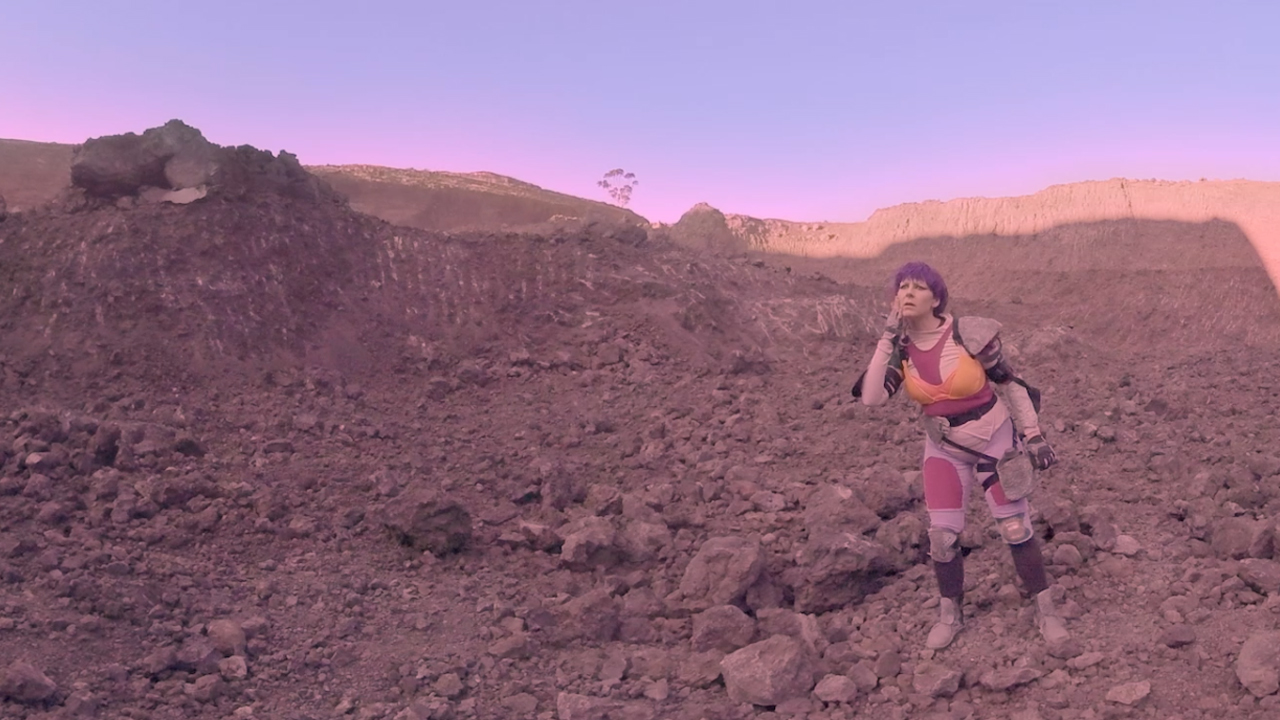 [dropcaps type=’normal’ font_size=’60’ color=’#ed145b’ background_color=” border_color=”]T[/dropcaps]he brave new world of virtual reality has opened so many doors for content creators. What was once the pipe dream of sci-fi writers and their basement-dwelling hacker protagonists is now a reality in humble living rooms the world over. The boom in the artform has inevitably found its way into the realm of music videos, with massive artists the likes of Marshmello, Poppy & Safia releasing 360 VR clips. Others are using the medium to expand on the artform, such as Justice’s interactive social music experience for ‘Chorus’, and of course Jake Donaldson’s epic VR take on Daft Punk’s iconic video for ‘One More Time’. 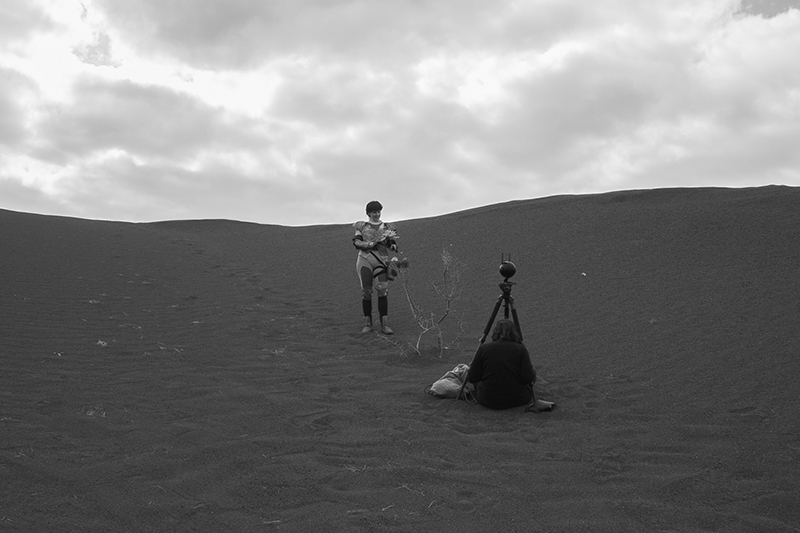 Melbourne electronic artist Louise Terra recently teamed up with director and visual artist Rachel Feery to create their own foray into the VR music video world with ‘Nature Calling’, a moody low-key track that appears to discuss the disconnect between our real life and online personalities. This theme comes to life in the video as Terra, stranded in a desolate future world, is confronted by a shadow version of herself amidst floating retro-aesthetic video game stats and icons.

Director Rachel Feery describes the very organic way in which the video’s concept and the expansive execution came about: “It is interesting how things evolve. When Louise and I both listened to the track, it was evident there was momentum in the arrangement and visceral quality to the song. Terra sings, “…flesh and blood”, “…through the mud”, “…falling from the bone” all to the end contradiction of the lyric “closer apart”. Terra sings about a kind of self-affliction and so we thought this other suffering could battle itself.” 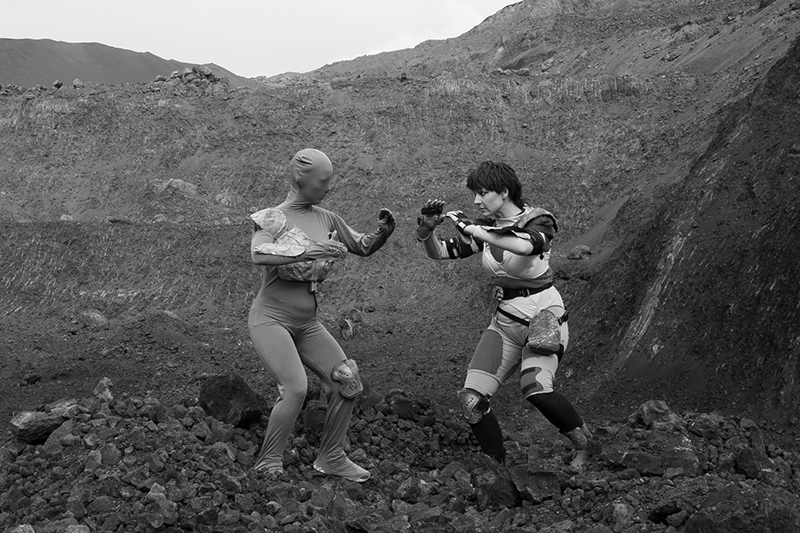 According to Louise Terra, the decision to do a 360 VR video was one that she had been considering for a while now, it just meant finding the right people to collaborate with and the right location to do it: “VR had long been on my radar but seemed like something far from my reach, so when filmmaker Rachel Feery suggested we independently co-produce a music video shot in 360 degrees, I was really excited to explore this medium.”

“Because the constraints of shooting in 360 degrees means everything is in shot, we needed to find an environment that was totally immersive. Amongst sites we were considering, Rachel had found a working mine close by Melbourne, so we went for a site visit. We immediately fell in love with the alien, post-apocalyptic environment there. The landscape had a loud character, totally otherworldly and inhumane, like a simulation of mars or earth after humans had completely annihilated life. It perfectly suited the sci-fi atmosphere of the song and wrote itself into the video game battle narrative we had envisioned for the clip.” 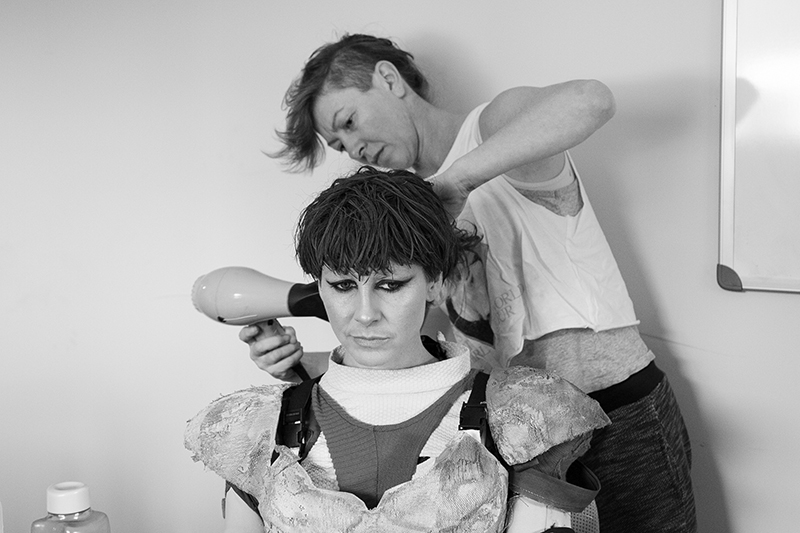 For director Rachel Feery, a visual artist and videographer, ‘Closer Apart’ was her first time delving into both the worlds of music video and of virtual reality, an experience that sounds equally as challenging as it was rewarding for Feery: “Directing, producing and editing 360 content was both an exciting and challenging process. The format is relatively new with no clearly defined rules and processes just yet. There isn’t a set of conventions that video music clips have either. However, I know many music videos are made on shoe-string budgets, often by artists and musicians working together within a creative community, so in that sense, I felt free to approach it like any other art project.”

The video is compiled of long scenes shot from single stationery points from which we can see Terra’s protagonist character moving throughout the space, interacting with the environment and eventually, her own imposter antagonist. This approach required meticulous staging and adaptation of the process from Feery in the lead up: “Reflecting on the experience there was a lot more preparation and rehearsal leading up to the shoot. A lot less wiggle room to cut or retake like in traditional film formats. You can’t punch in or really rearrange the footage, like the visual frame. We wanted the scenes to play out in real time so the participant felt like they were witness to the action. The language is different, the viewer’s point of view is not set. You really have to try and guide the audience to look in a particular direction.” 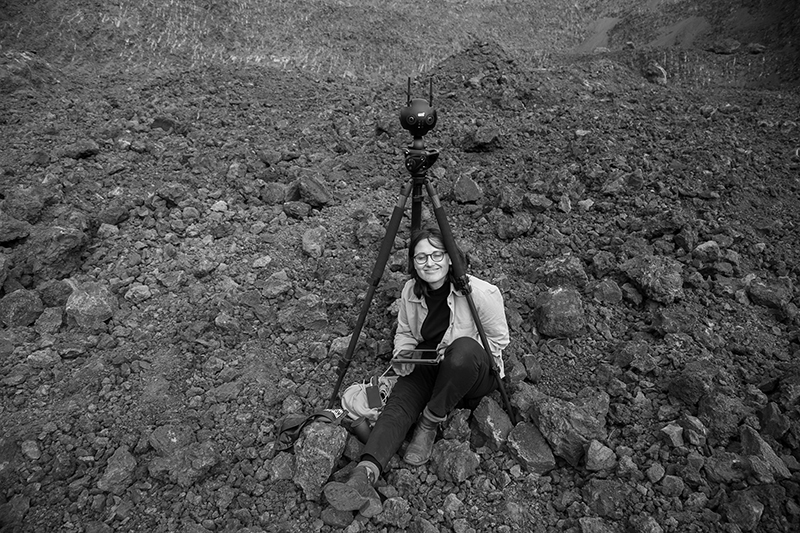 “You also have to be able to work fast and rely on the musician to memorise their movements. As everything in the round is in shot, there can be no lights, no markers, no cue cards. The direction “Clear the set” has a whole new meaning in VR. In my case, it meant the crew had to drive back to the site office away from the filming leaving just the camera, tripod, performer and the director. Really it was Louise and myself tucked away under the tripod cuing sound, recording, continuity, and monitoring the shot and also watching the action.”

With a video that draws so heavily on the desolation and emptiness of the world, a great weight of responsibility is put on the shoulders of the performers. Both Terra and her cloaked doppelganger are given the usual actor’s task of drawing the viewer’s attention, with the added pressure of the 360 format giving the viewer the option of looking literally anywhere they want. Terra muses on the process: “It was pretty intimidating! I had done a fair bit of acting as a younger person but I had never done any fight acting training. I got assistance in rehearsals off performer/choreographer Holly Durant and actor/co-star Janie Gibson, but nothing could prepare me for actually performing the scenes on location. The site was jagged, broken rock all around and more suitable to large machines digging than it was two small humans walking on it.” 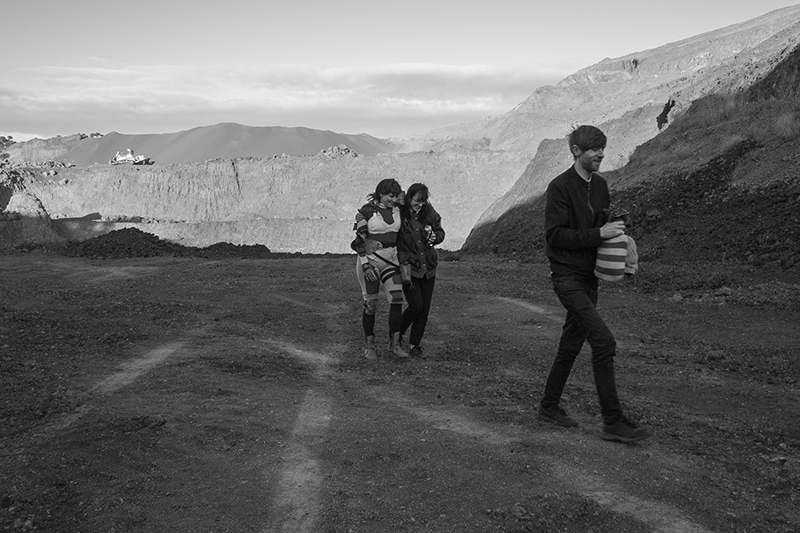 “Also, in the week of the shoot, I re-injured an old knee injury so I was feeling physically and psychologically very vulnerable. I really wasn’t sure I would be able to pull it off. Weirdly enough this vulnerability was the perfect temperament to bring to the character, Terra. I was able to channel the emotions I was experiencing into that first shot of Terra waking up in an alien environment, physically depleted and disoriented. From that point on I realised I could do this, so I relaxed more into the acting and focused on what of myself I could bring to the role. By the time we finished the shoot I actually felt like I had gone on a big personal journey and achieved something kinda superhuman… it was a powerful feeling.”

Here is the official video for “Nature Calling”