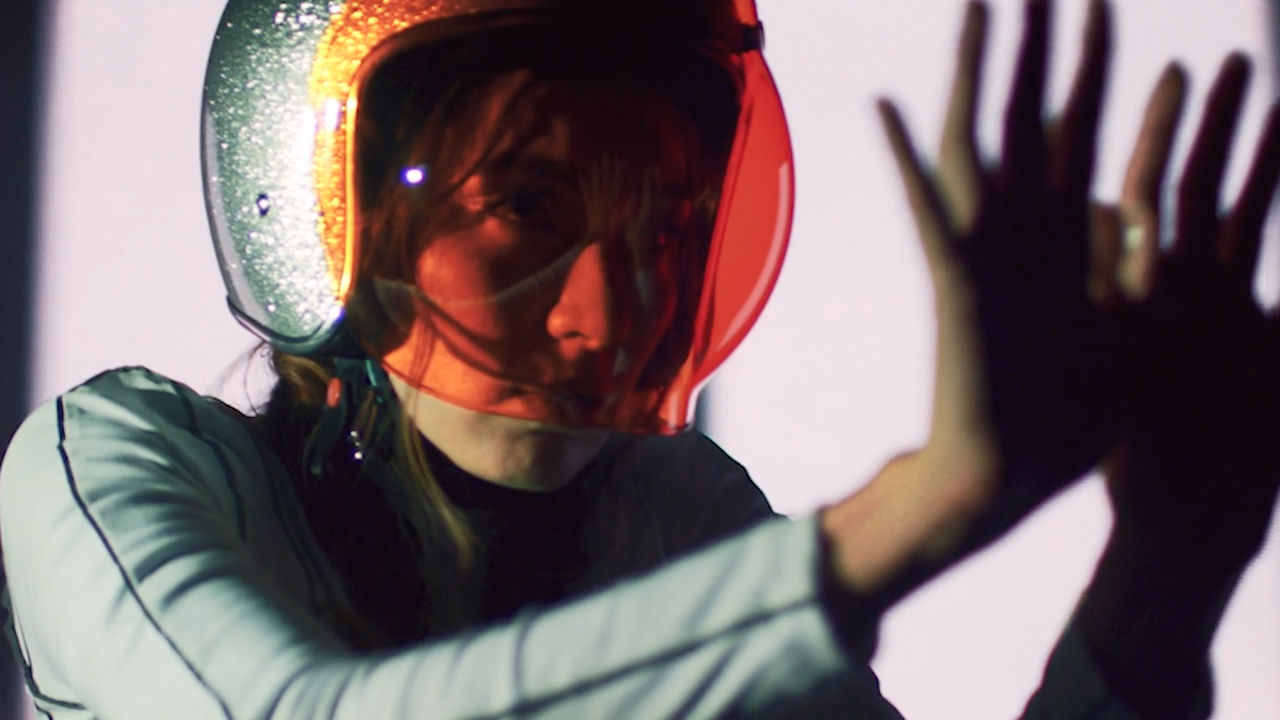 bane artist Jaguar Jonze (otherwise known as Deena Lynch) flaunts endless creativity in her new track ‘ASTRONAUT.’ With a style thematically and stylistically reminiscent of the late great David Bowie, Lynch ascends, taking us with her on a sonic emotional journey.

The track builds from an eerie two-note guitar pulse to a powerful cinematic crescendo. It was recorded during Lynch’s 40-day hospital stay earlier this year, while she was seriously ill with COVID-19. With so much pain and passion poured into her lyrics and delivery, Lynch reframes ideas of fear and anxiety, with a pronounced edge. The atmospheric soundscape comes with a visual component, directed by Natalie Sim. 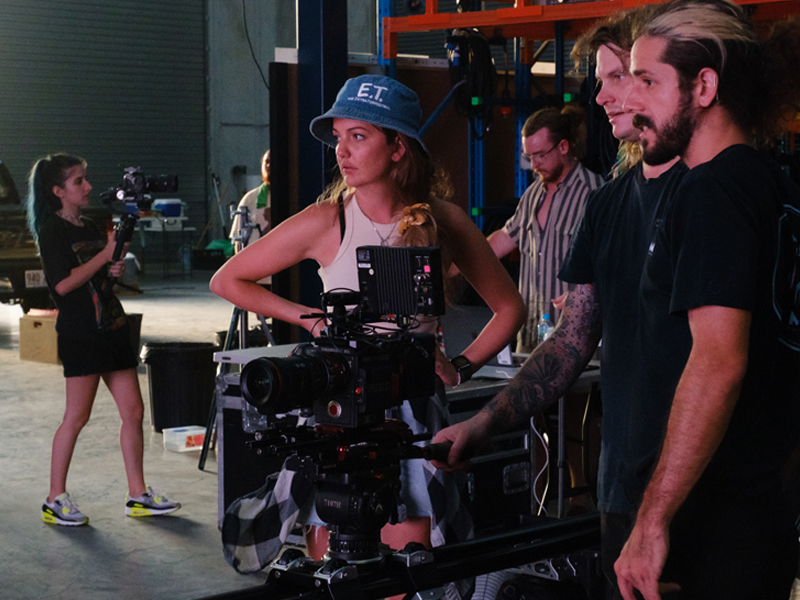 The clip was shot over 6 hours at Creative Productions on the Gold Coast. The ambitious endeavour would call for LED projectors, suspension wires and a talented crew who were each required to wear many hats. Sim elaborates:

“Everyone busted ass! It’s always such an energetic and monumental hustle to pull off what’s in your mind, especially when under time and budget constraints. But honestly, that’s what I love about projects like this. They push everyone to their limit and we tend to surprise ourselves at what can actually be achieved.” 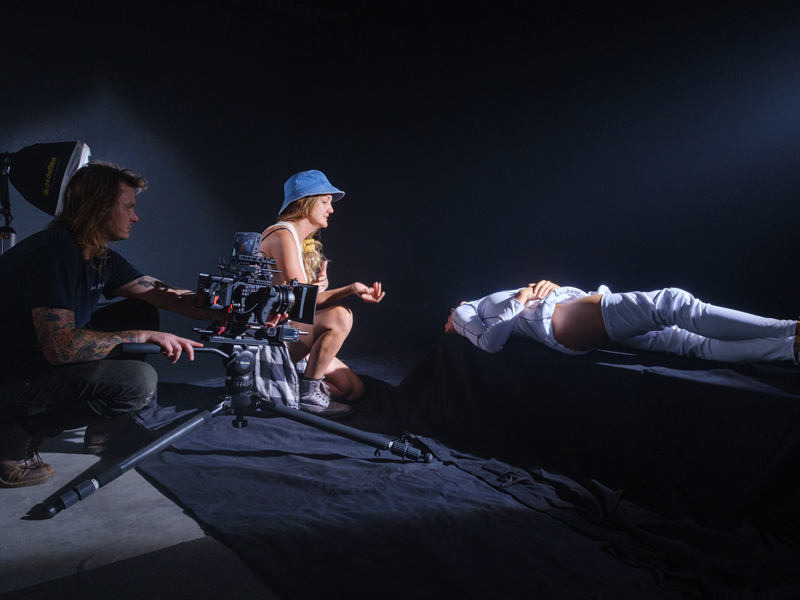 When it came to brainstorming an idea for the clip, Sim’s creative choices were informed strongly by early conversations with Lynch. As the track deals conceptually with the complexity of anxiety and isolation, Lynch wanted to find a creative way to express this visually:

“Originally she was to be suspended in a large dark space – I think she was thinking by Shibari ropes! A few months earlier Alex and I had started working with Darko Tuscan, who’s an awesome stunt coordinator, so eventually we arrived at the idea of hanging her via stunt wires as if she really was in space! We mentioned the word stunt to Deena and she instantly said YES! 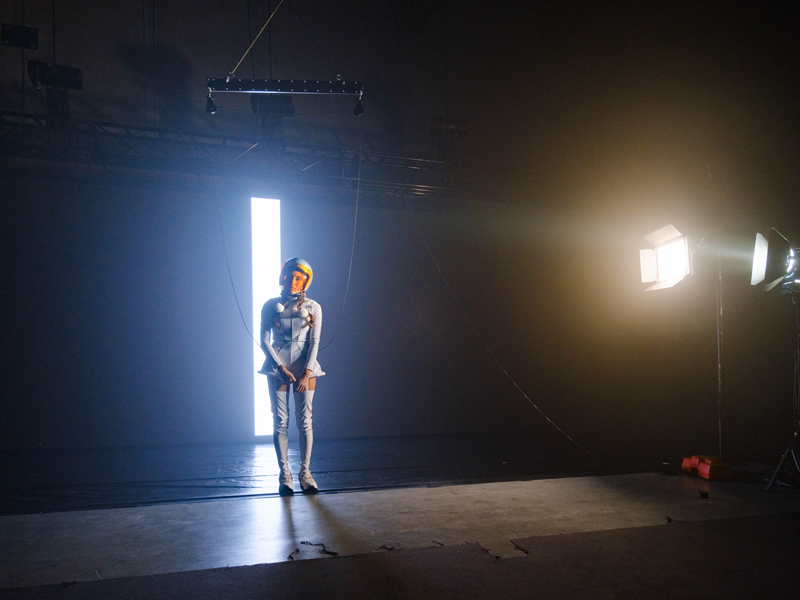 The interstellar space theme is fully realised in costumes by Cindy Vogel. Vogel’s stunning spacesuit for Lynch, complete with thigh high socks and a futuristic mini skirt is as subversive as the track itself and adds to the larger than life production. Also worth noting is Lynch’s space helmet, which despite looking like something out of sci-fi epic, was actually fashioned out of a cheap lampshade from Ikea.

With a strong visual theme established, Sim ramped up the emotional mayhem through a dramatic sense of extremes. With the use of hard cuts from wide to extreme close up shots “that feel like you are inside the space helmet” Sim creates a suffocating sense of claustrophobia and confinement. The suspension wires add a sense of floating in space, left to the mercy of the unknown. 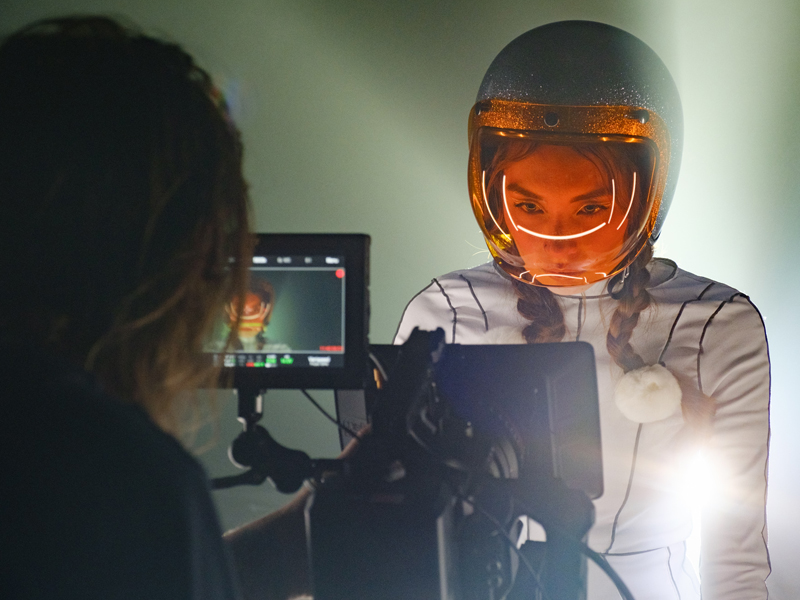 The stages of anxiety and panic lay the groundwork for the structure of the clip’s narrative, which is peppered with potent symbolism, Sim explains:

“The black and white box at the start which reveals Deena hanging, had the intention of being those first moments when your mind and body start going against each other…the moment when we go from black and white to blue is the breaking point. [At the end, when] we see the black liquid covering the helmet before cutting back to a stripped back version of Deena no longer hanging…this is the moment of complete takeover.” 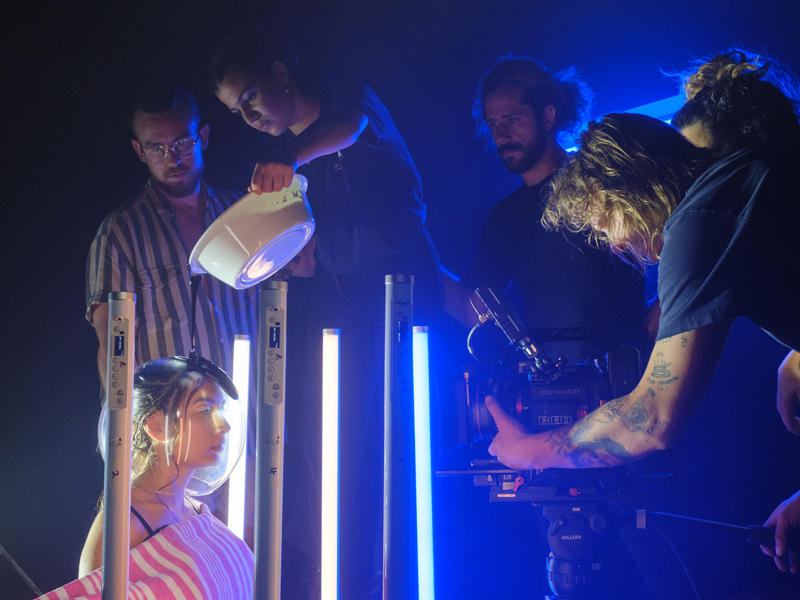 “Keep the subject moving and the camera static. 2001 Space Odyssey was the inspiration (classic haha) for lighting and framing for a lot of the shots, especially for the helmet shots. We had two of the crew spinning in circles with Titan Tubes and another with a 1.2 HMI swinging it from side to side.. Then a fan at the front to give a feeling of movement through space. 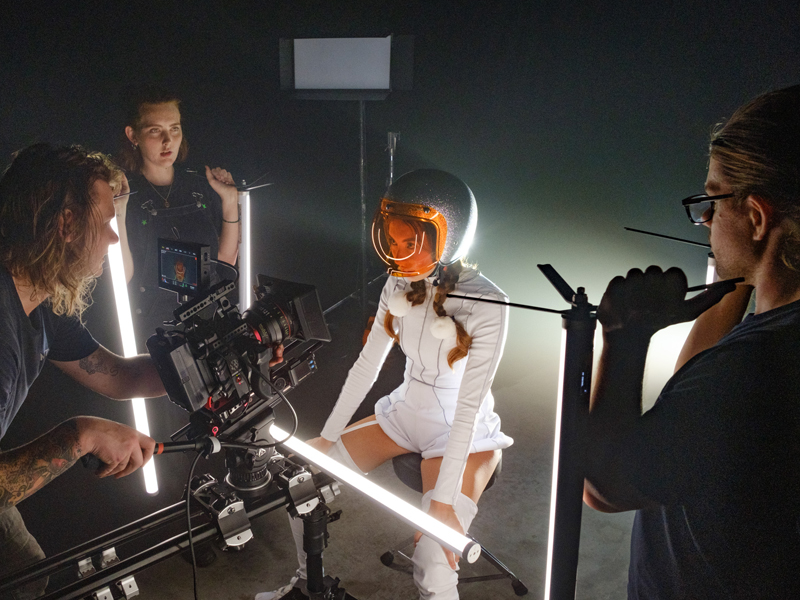 Set design too, was relatively minimal as the 10×4 metre LED screen used, packed a punch visually. Projections glitch and flash throughout the clip, representing intrusive nervous thoughts which wrap around the subject, refusing to be ignored. In addition to this, Sim and her team created a floor of black plastic sheeting painted with concrete sealer to appear like water, reflecting the projections seamlessly:

“The LED was such an amazing tool to use for lighting throughout the shoot that you would never achieve through using a green screen. Majority of the suspension shots were very minimal lighting – because the LED had this amazing wrap around effect…Originally I wanted a shallow pool built under the screen to achieve the effect of infinity through the reflection… but with time and budget restraints it wasnt achievable. Producer/DOP Alex Flamsteed had bargained enough for the screen alone.. Pool was a hard F$@K NO.” 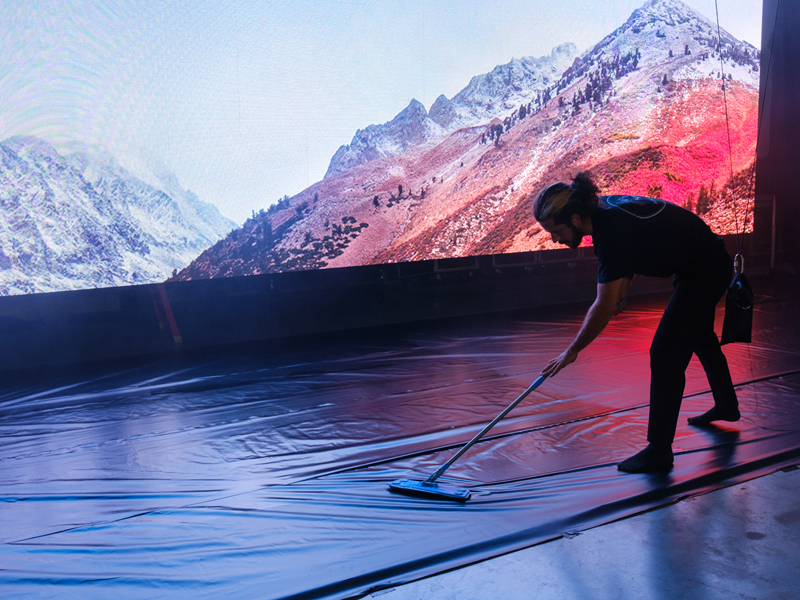 Cinematographer and producer Alex Flamsteed captured the celestial magic, shooting on the RED Dragon with the Canon CNE 18-80mm, and Canon CNE Primes (35mm, 50mm.) For lighting, the team used a 1.2 HMI, Arri Skypanel, DEDO DLED 7’s and a couple of Astera Titan Tubes. Another positive from using the LED screen was that it provided a major light source for the shoot, despite being at only 15% max brightness the entire time.

After wrapping, came the gruelling 3-week post production phase. Sim details her experience being involved with editing, painting out stunt wires from every shot:

“It was definitely the most challenging clip I’ve cut. Once we had the locked edit it was wire removal time…Julian Palma (1st AC) Alex and I sat in our office for 4 days straight (a few sleepless nights, a few meltdowns) painting out wires in AE. Once we got to the last two days of the VFX -I spent around two days colour grading. Annnnd, it was done!” 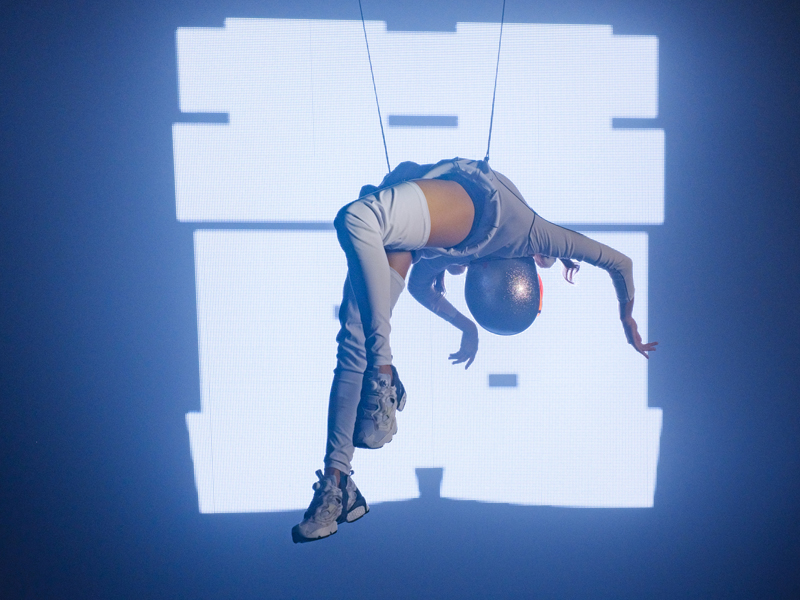 Natalie Sim and her multi-talented crew have constructed a clip, which through meticulous attention to detail and purposeful film-making, delivers an emotional hit. The atmospheric world commands attention as it erupts with passion, colour and light.

Here is the official video for ‘ASTRONAUT’