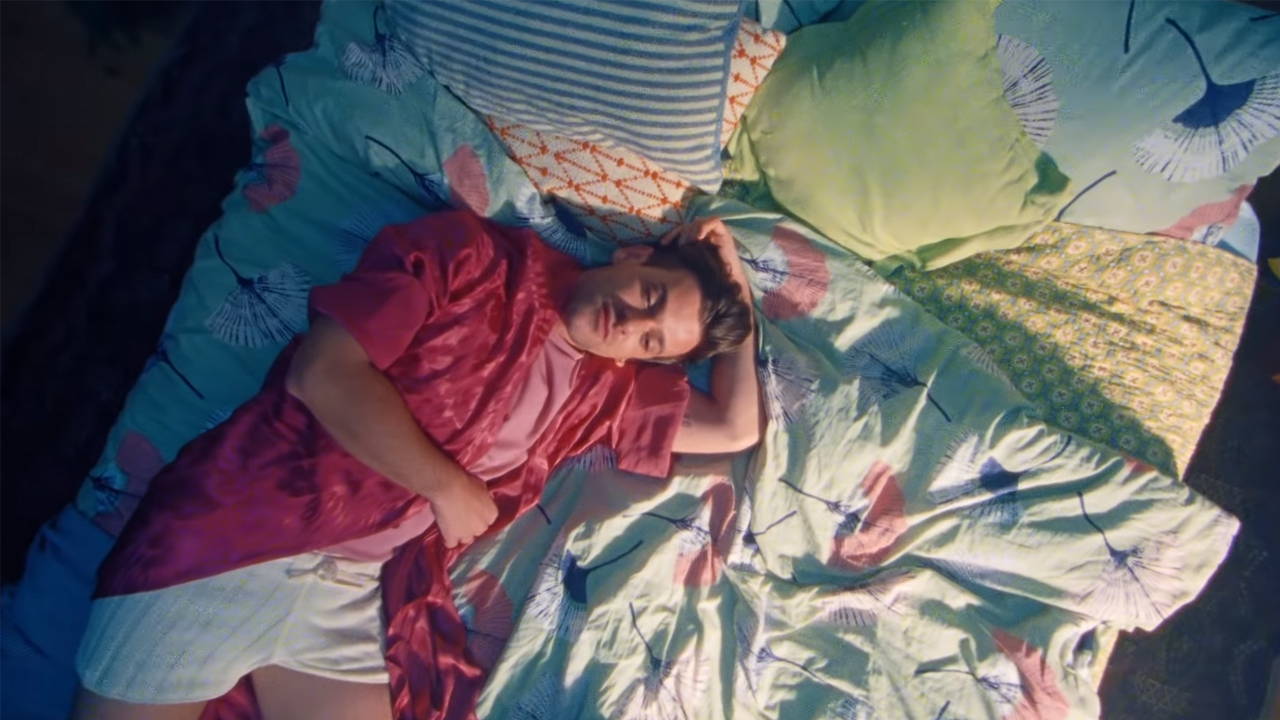 [dropcaps type=’normal’ font_size=’60’ color=’#ed145b’ background_color=” border_color=”]I[/dropcaps]t’s such a wonderful and rare occurrence to have a song that sonically captures so precisely the vibe laid out in the lyrics, but that is exactly what Josef Salvat has achieved with ‘in the afternoon’. In his carefree ode to lazing about with a loved one a laidback beat and playful bassline are given such lovely colour by Salvat’s charming crooning. Add to this perfectly compiled audio recipe an idealisation of the song in video form by director Andrea Mae Perez and we’re really cooking something sweet.

“To me, the track really evokes that feeling of being freshly in love with someone.” Explains Perez, “That’s how the concept was born, from a memory of days when I didn’t want to leave the bed I was sharing and nothing else in the world mattered besides my connection to the other person. Initially, my story involved just one lover but for Josef it was important to have a variety of genders in the video rather than having to choose one. This decision actually ended up providing an entirely new dimension to the narrative because it became less about the specific love story between two people and more about what falling in love can feel like universally, regardless of how many times a person has experienced it in the past.”

Perez gives us such a delightful and inviting glimpse into this experience, as Salvat is shown with multiple partners all partaking in different expressions of intimacy, all evoking that dreamy and carefree feeling of nothing else mattering but the person you are with. The video draws so much of its comfort from the way it is shot; the soft warmth of film, the fresh sunlight that washes over the room, some added splashes of colour to make everything feel heightened and wondrous.

Perez elaborates on her approach: “The lighting was another character in this video since the start. It is the main element that helped us achieve that magic realist feel through theatrical bold colours. It also allowed us to portray the idea of being suspended in a never-ending day because time is not chronological in the video, it jumps from day to sunset to night and back again. I was so excited to shoot this video on film! It just provides a whole different texture to the piece and it really enhances that dreamy universe the characters are trapped in.”

Aside from some beautifully framed top-down shots of Salvat in the bed, the video is predominantly shot on a free-moving handheld camera. This really captures everything as if it is an unscripted moment in time, something organic that we’re being invited into rather than something fabricated. “We wanted to make the audience a part of the video,” says Perez, “and the handheld camera allowed us to create a playful dance where they could take a lover’s place at times and at others be a voyeur. In terms of practicalities, we had to keep the set as clear as possible from kit and crew members because the camera was moving so freely, following the characters’ actions. This enabled us to have fresh footage for every take, since each time the camera would follow a slightly different direction, as well as to be close to the lovers and capture their intimacy with Josef.”

Occasional refrains from the happy couples are offered throughout as we see Josef Salvat in bed alone. The aesthetic of these shots feels different, slightly colder, contrasting the relationships against loneliness. When asked about this, Perez replies: “Contrast is what really makes us appreciate most everything in life. We need those moments of solitude, introspection and reflection to fully understand and appreciate those ecstatic moments when they happen. Having those shots of Josef alone throughout the video, singing to camera, allows him to become the narrator of his love stories and, therefore, to further engage with the audience. In the end shot in particular, Josef is left alone on the bed and the camera pulls back to reveal a huge mess that has been accumulating throughout the video, a metaphor to all the memories he is left with.”

Here is the official video for ‘in the afternoon‘