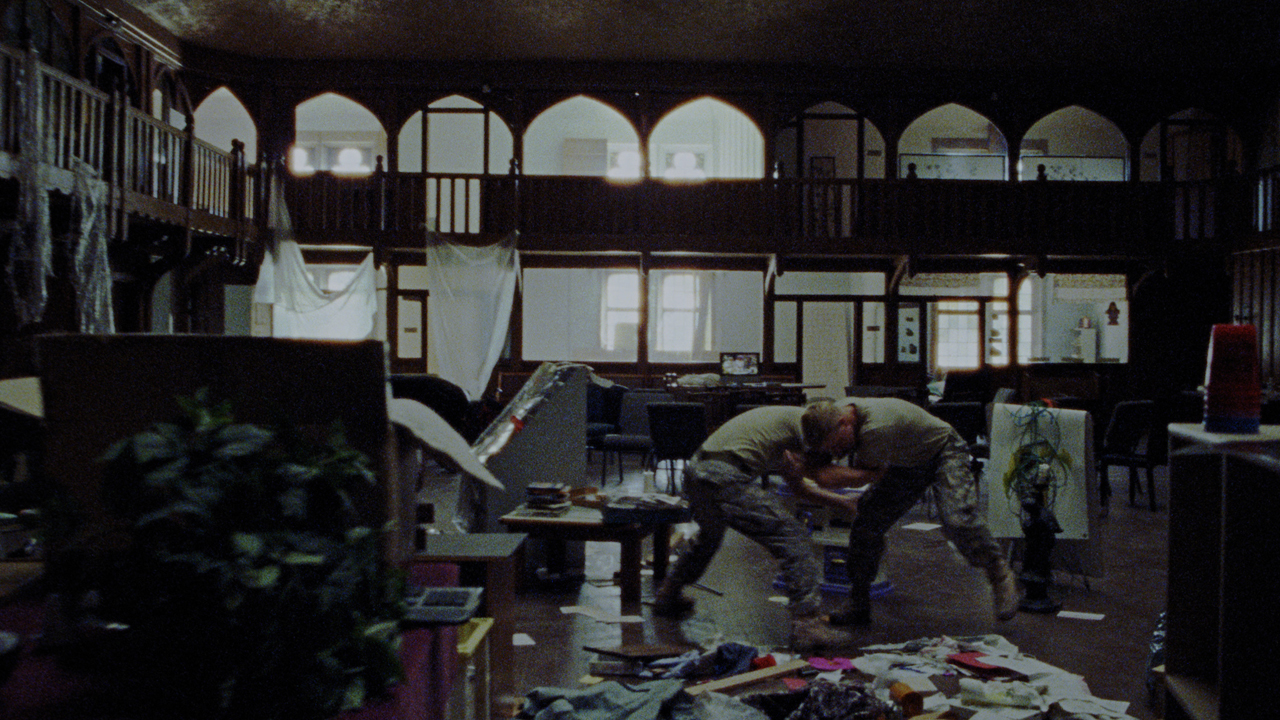 he music video for “Faith Healer” directed by Daniel Henry is not about the power of faith, but what it leaves behind. The clip follows three seperate, yet thematically intertwining stories all set within a dilapidated church. Julien Baker, the musician behind “Faith Healer” tends to centre on themes of belief and despair in her work and the video’s setting, imagery and story complement these themes beautifully.
In many ways, the music video feels more like a short art-film than a simple accompanying piece to a song. Some scenes feature diagetic sound which blend beautifully with Baker’s track. In the opening sweeping shot, following the two brothers wrestle we hear their scuffle as they tumble through piles of trash. It’s a subtle detail but it reveals that the clip is not meant to simply accompany the track but transform it. Faith Healer is a subtle but powerful exercise in adaptation that comes together beautifully. 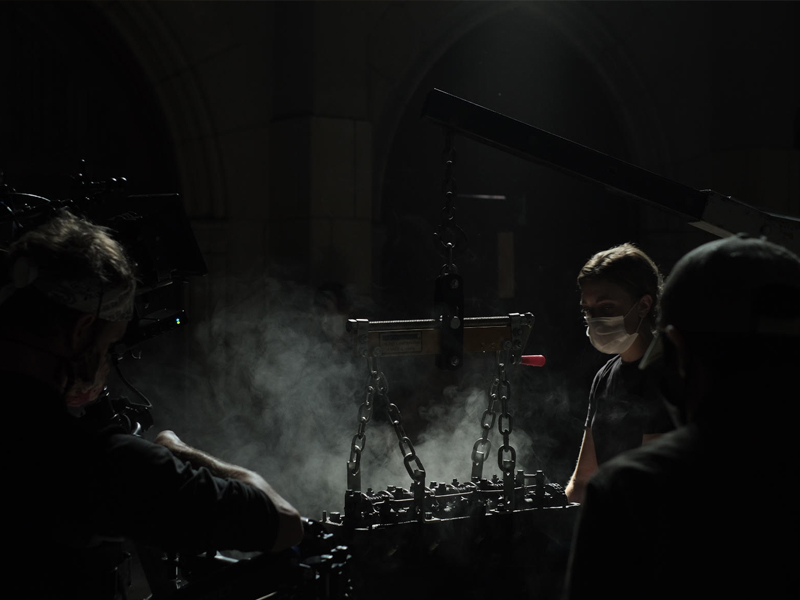 Visually, the video is immaculate: shot on glorious 16mm film, Henry and DOP Dustin Lane curate a uniquely cinematic style. The celluloid film bathes each shot in dark blues, soft browns and faded blacks, giving the clip a nostalgic and contemporary but timeless atmosphere.
Every frame has a uniquely worn-down feel which pairs beautiful with the video’s cluttered set-design. Certain rooms contain piles of used and seemingly forgotten objects randomly but intricately organised through the scene: Piles of forgotten toys, furniture, old photographs, a piece of plastic magically floating through a street or a soaking wet car engine suspended on a hoist seemingly representing some sort of alter to meaninglessness.

Due to the limitations of a pandemic-era production, much of the set-design was left up to Henry and his minimal crew:

“I didn’t have a production designer and was left to do a lot of the designing myself… with the help of a few friends in super swing positions. I really like intuitively designing spaces that way. It feels a bit more like painting how you can just throw some objects out of context into the room to block space and compositions. I was definitely running around right before takes like a crazy person, hanging plastic and arranging trash in the frame.” 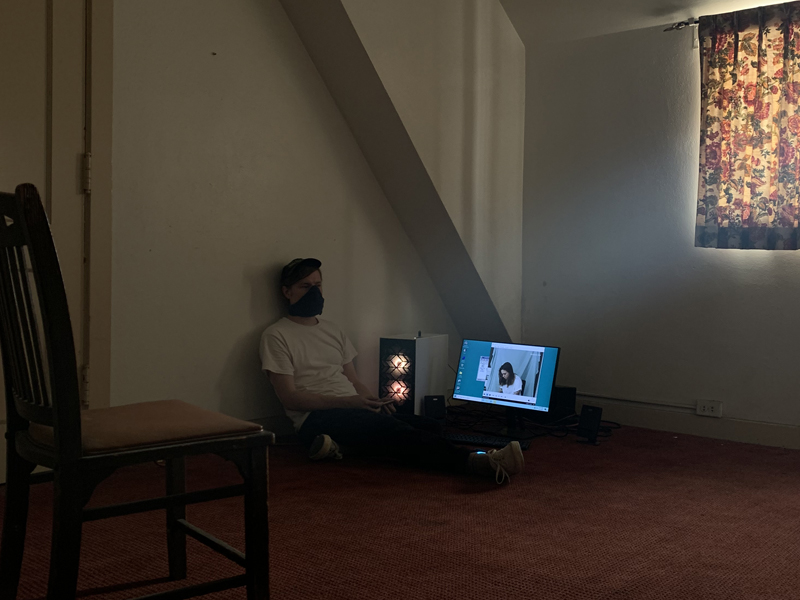 Interestingly, the video was produced in a way which beautifully complies to social distancing. The only two actors who physically get close to one another are the military wrestlers, who are brothers in real life: (Brett and Reece Shaberg). Julien Baker also never physically enters the set, only appearing through a video screen. Henry writes:

“[…] we had a much smaller crew and we shot Julien’s portion remotely. While the main location we shot in was interiors, the space was soo large and expansive that we were all able to keep our distance as well as utilising PPE gear. While Covid preparations definitely takes a bit of brain rewiring, it was fairly easy to fall into the new safety requirements”. 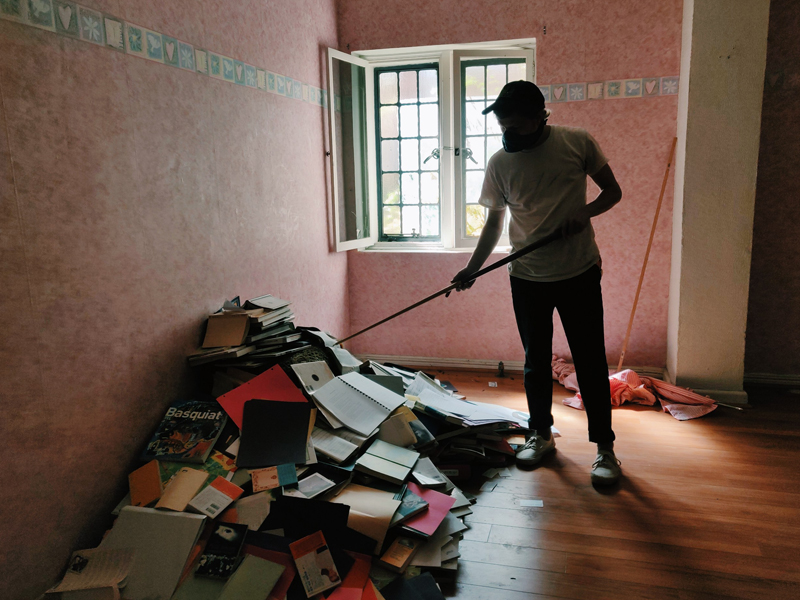 Julien Barker – Faith Healer (BTS by Anthony Cabaero, Nicole Prokes, and Jimmy Sudekum)
The video can be said to comment on themes of isolation and separation, themes which are all more than relevant in times of the pandemic. Interpersonal connection, both in the video and nowadays are only mediated through screens: the digital monitor which plays Baker’s performance, the man (Stephen Woo) watching the two brothers wrestle through a window, the footage of the evangelical choir, and the woman (Gwen Smillie) photocopying passages of the bible on a worn-down office photocopier. These visual elements beautifuly convey a sense of both physical and emotional distance, which culminates in an artistic critique of regressive ideologies and institutions. Henry comments:

“I wanted this video to express some of my frustrations with people and institutions that often exhibit prohibitive and regressive types of ideology. Ones that seem to argue amongst themselves tirelessly without ever evolving or experiencing any emotional growth. These institutions often demonize others with their rhetoric instead of being the example of their truth they wish to spread. What results is a meaningless string of Copypasta that only serves the people fighting themselves.” 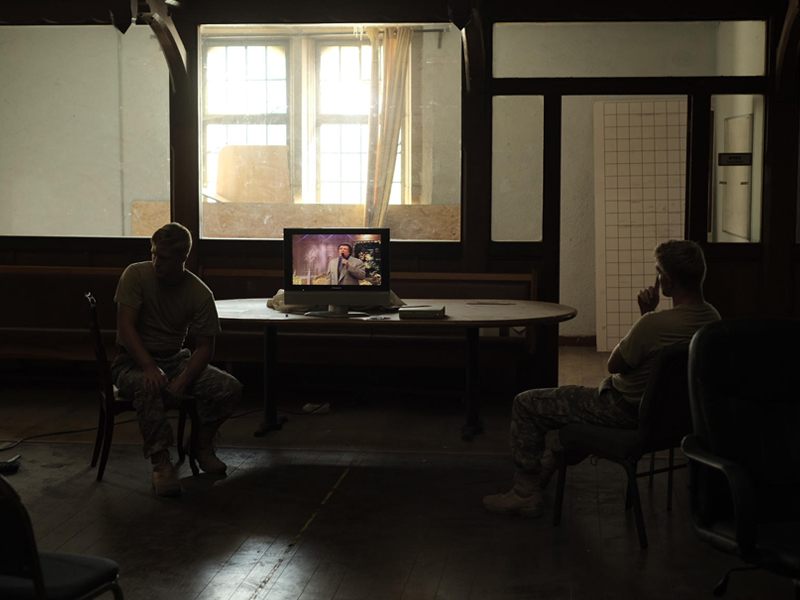 With this critique in mind, it makes sense that only when we escape the church and see the plastic bag flying down the street can the brothers cease their perpetual violence and finally relax.
However, while Faith Healer is critical of these regressive institutions and groups, it still finds the beauty in the feeling of distant loneliness found in those spaces. Henry, (and Baker) invite us to sit alone in an empty room, surrounded by trash and the residue of things that once held belief.
So, if you’re in the mood to contemplate the intricacies of ideological regression, or simply want to enjoy some beautiful images make sure close the blinds, get comfy on the couch with a cup of tea and check out the video for Julien Baker’s Faith Healer.
Faith Healer was shot on 16mm film on an Arri SR III.

Here is the official video for ‘Faith Healer’