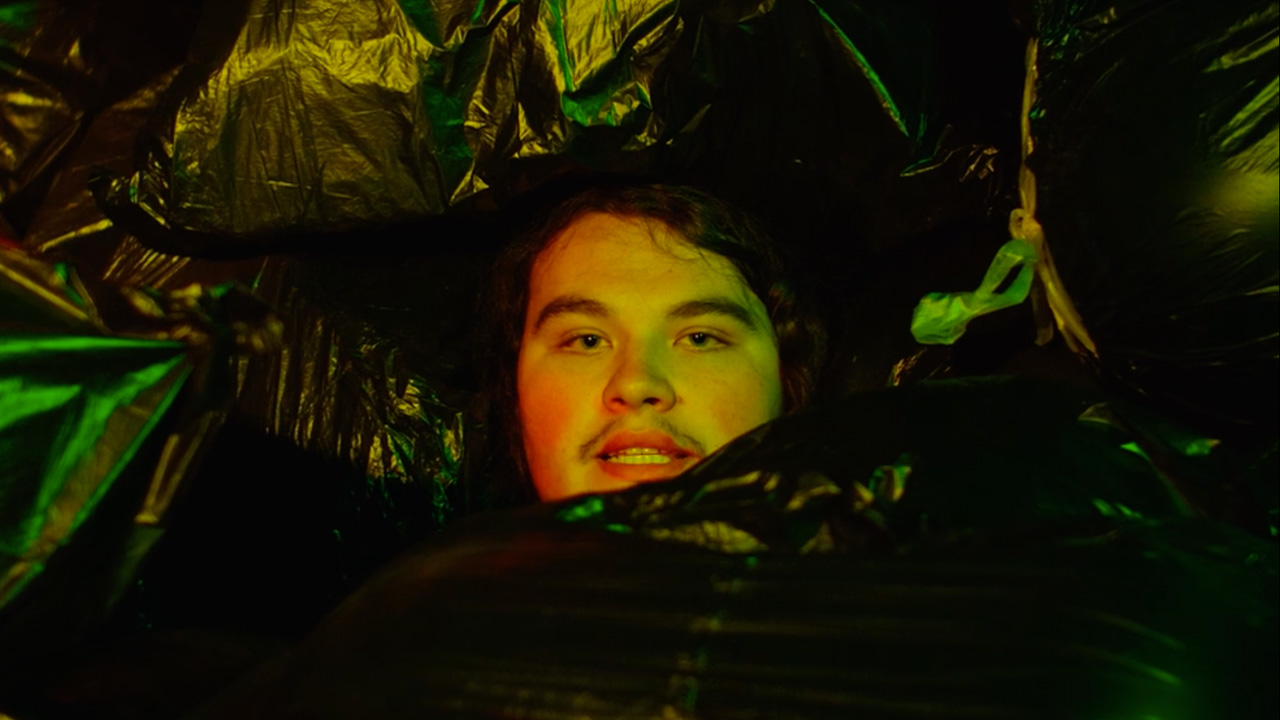 It’s hard not to be drawn in by the gleefully upbeat music of Indie pop-rock band, Mum Thinks Blue. The 5-piece Adelaide band is known for their energic, radiant sound, and it was director Jai Ruciak’s goal to capture this dynamism in the music video for Side That Wasn’t Told. Ruciak strikes a clean balance between the band’s playful sound and the song’s more vulnerable lyrics, relying on the clip’s bright Y-2K aesthetic and visual humour to offset the returning motif of garbage. This contrast was key to Ruciak’s vision:

“I really liked how upbeat the song was, while still vocalising some pretty real feelings. So, I just think making the video as bright and playful as it was, while still not being able to escape all the garbage, was a good way to get that across.” 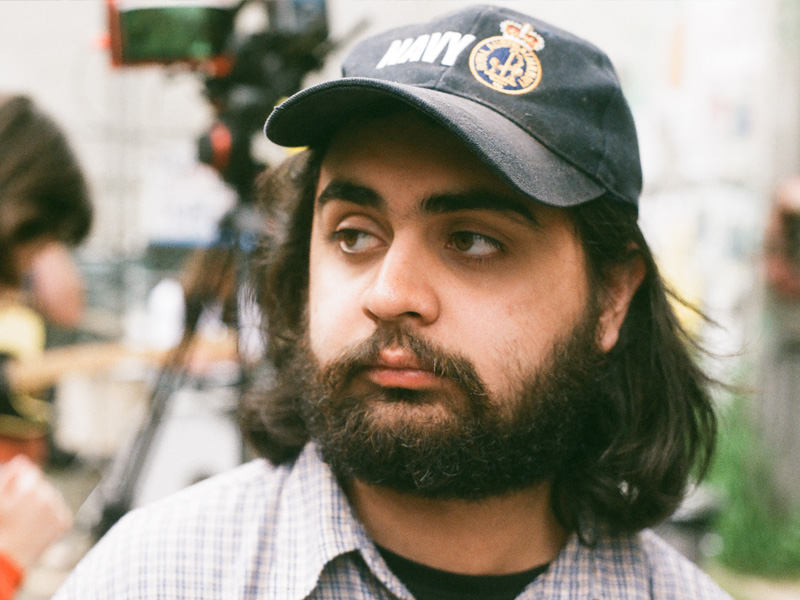 The video opens on a black and white shot of a garbage can surrounded by bulging bags of rubbish. Written on the can is a statement claiming that “no plastic was wasted in the making of this video”. As a human-like entity made completely of garbage bags awakes suddenly, and rushes out of frame, it’s hard to believe that this sentiment is true. However, in discussing the logistical and creative challenges of the video, Ruciak reveals that designing the trash entity in a way that was sustainable was always his intention:

“First coming up with the idea was a bit of a headache since the song is so lively and I wanted to do it justice with the time and budget available. Once I had the idea locked down, figuring out how to do it with my production designer Riley [Fraser Waters] without killing any sea turtles was more of an issue. We found some recycling plants that took soft plastics and filled them with foam, that I’ll be re-using for projects in the future.” 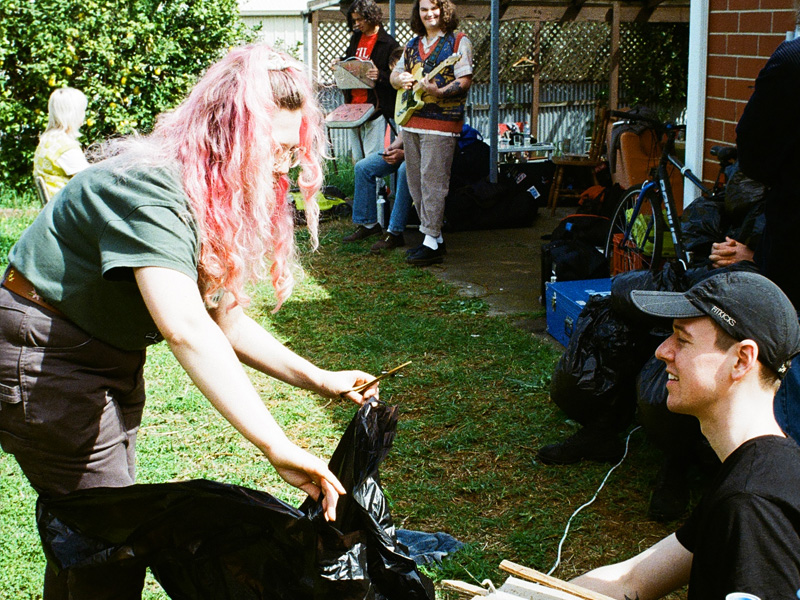 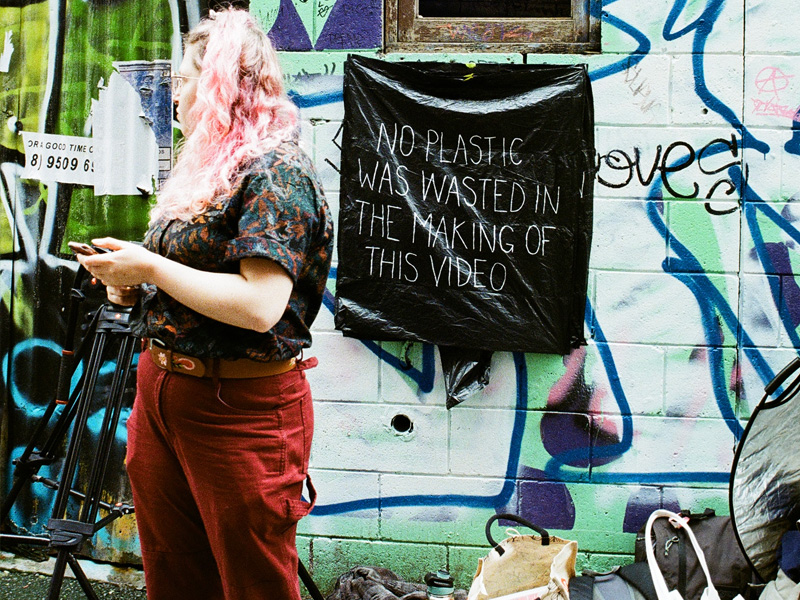 This trash covered entity is the main antagonist of the cat and mouse chase driving the video. Introduced in the clip’s title shot running away from an actor with a net, the trash entity is rarely depicted as a genuine threat. Yet, it can’t be escaped. It is always there, existing in the back of shots, wondering the streets, and occasionally bopping to the music. No one is ever successful in capturing this ‘monster’, instead the entity becomes a part of the band, as they eventually learn to live with it. Its unrelenting presence seems to act as a promising metaphor for the co-existence of the bad within the good. For Ruciak, the trash ‘monster’ was never intended to represent anything specific, and he hopes that the audience will find their own meaning:

“I think people can take whatever they want from the video now that it’s out, I don’t even really see the garbage man as a monster, he’s just a dude going through it.” 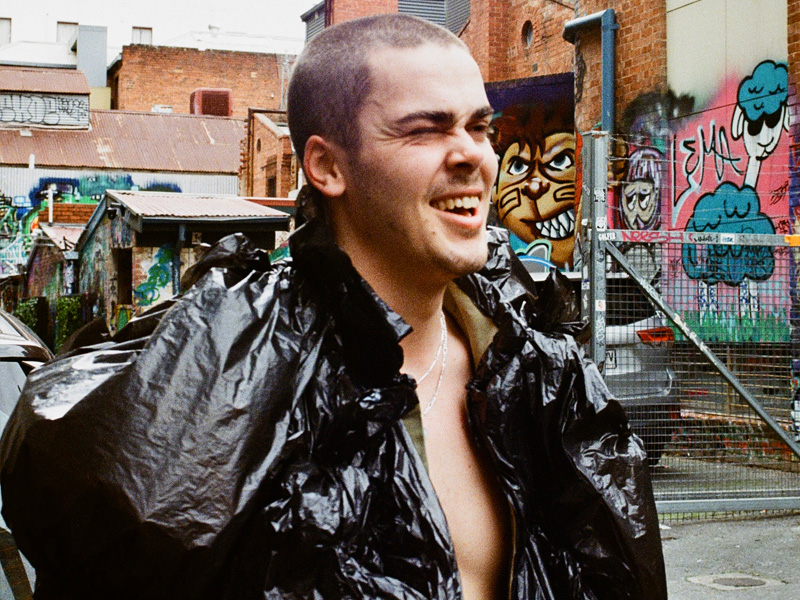 The video is clearly an ode to the hip hop videos of the 1990s, defined by their handheld camera movement, lo-fi grittiness, and wide-angle lenses. DP Mayah Salter always intended to mimic this aesthetic when pitched the video’s concept by Director Ruciak:

“Jai pitched [the video] to me as this almost 90s style, hip hop video, in which handheld and wide-angle lenses are always present. We shot it on a Panasonic GH5 with a range of Samyang lenses. As the camera was so compact and light, we were able to run around the city and suburbs without too many funny looks. The fisheye lens, which was an 8-15mm (thank you Clare) allowed that trashy 90s feel we needed.” 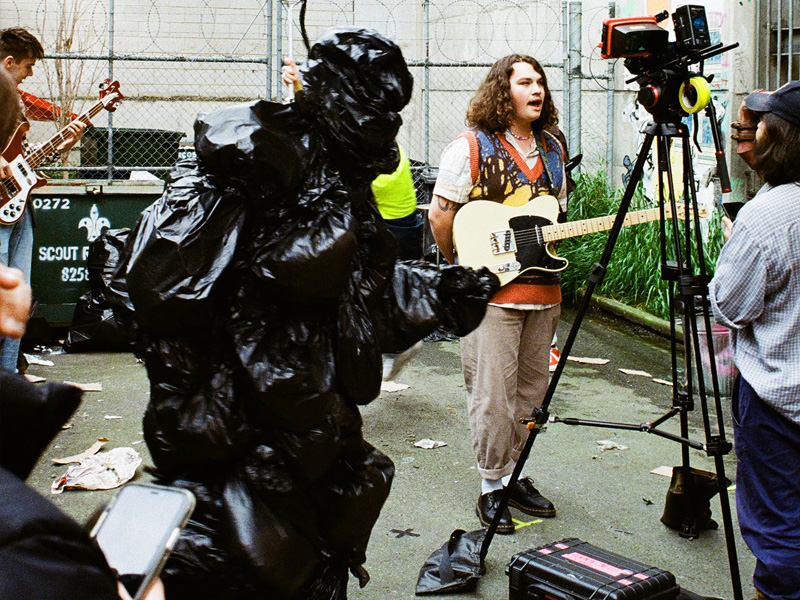 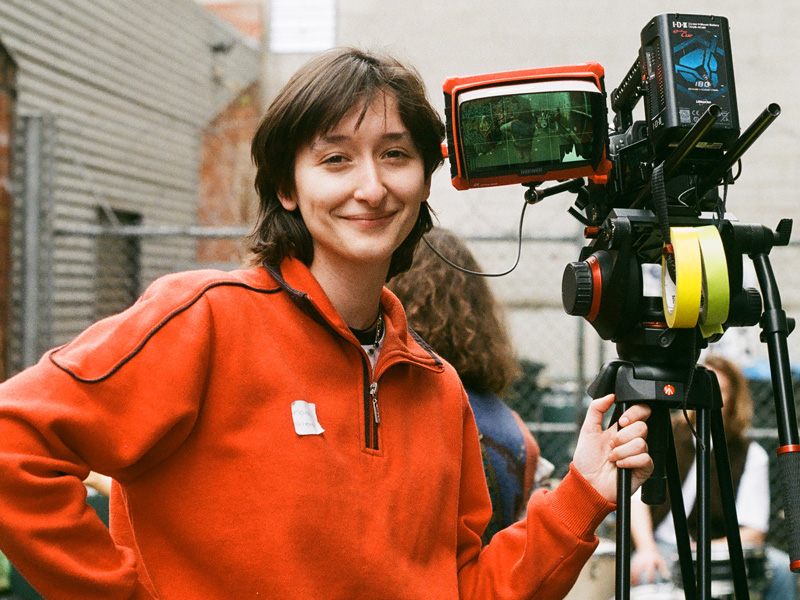 The Panasonic GH5 was an unsurprising choice for achieving the clip’s retro charm. As an incredibly compact DSLR, with the option to shoot in 4K resolution, it allowed the team to reach all the gritty corners of the Adelaide streets, while the Samyang lenses offered a nostalgic gleam under the natural sunlight. Although not 90s New York, the frantic camera movement and distinctive fish-eye lens delivers a familiar yet lively feel. However, as the video nears its halfway point, there is a shift away from this style. The camera is consumed by a garbage bag, transporting the audience into a softer, more dreamlike world. The natural daylight is replaced by a glowing yellow light, intersected by pockets of pink, green, and blue. The camera becomes more static and the movement more controlled, acting as a stark contrast to the deliberate chaos of the opening. DP Salter elaborates on this decision:

“In discussions about the structure of the video Jai and I always saw a shift in style for the second half of the song. We both sought after colourful and bright lighting design with vibrant costuming to exaggerate the contrast between the upbeat song and the atmosphere of rubbish. We wanted the interior shots to feel as though we were entering this dream-like world within this rubbish bag. So, making things as colourful and bloomy as possible was my aim.” 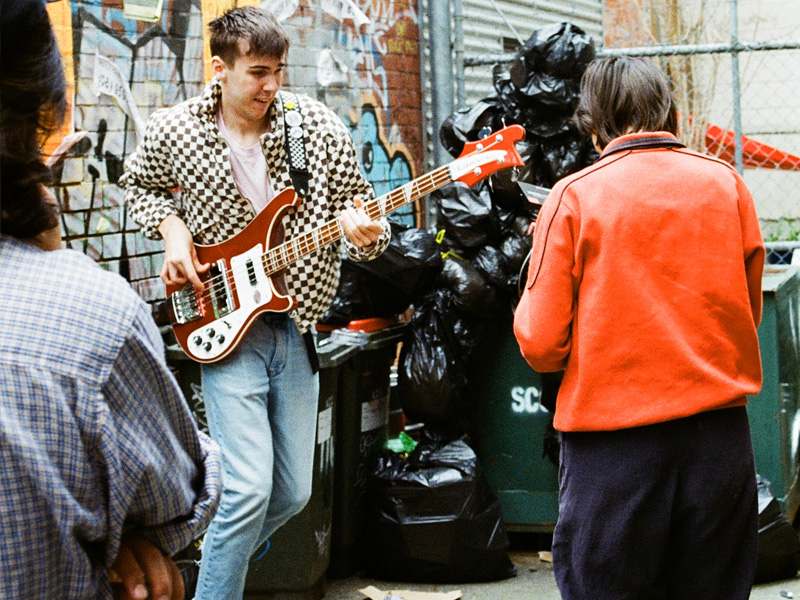 Salter achieved this dreamlike haze by using a ProMist +1 for the interior shots, which, when paired with the warm, coloured lighting, emphasises the ultimately hopeful message of Side That Wasn’t Told. However, Salter reveals that this contrast wasn’t completely intentional, but more so, a happy accident:

“There was an issue of power access for the exterior shots, so we were unable to use any lights, but I think it suits the changing structure rather than maintaining this stage light glow throughout.” 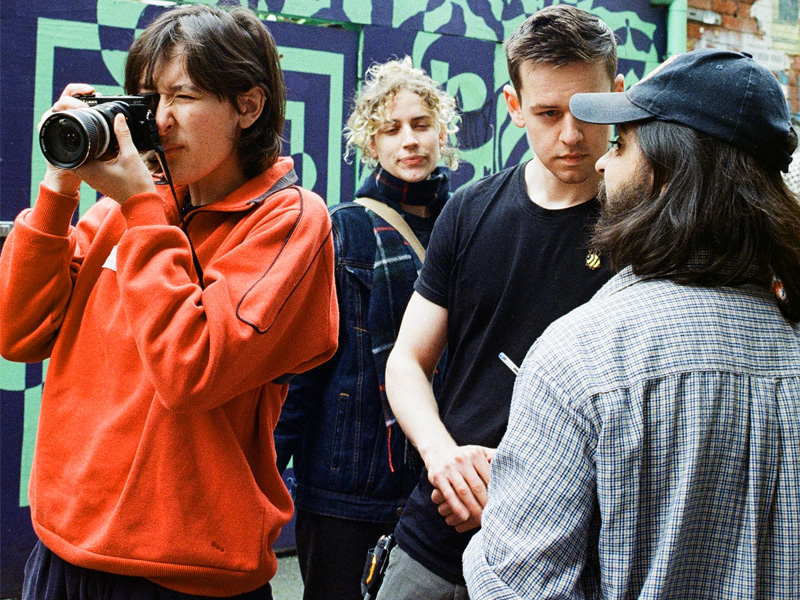 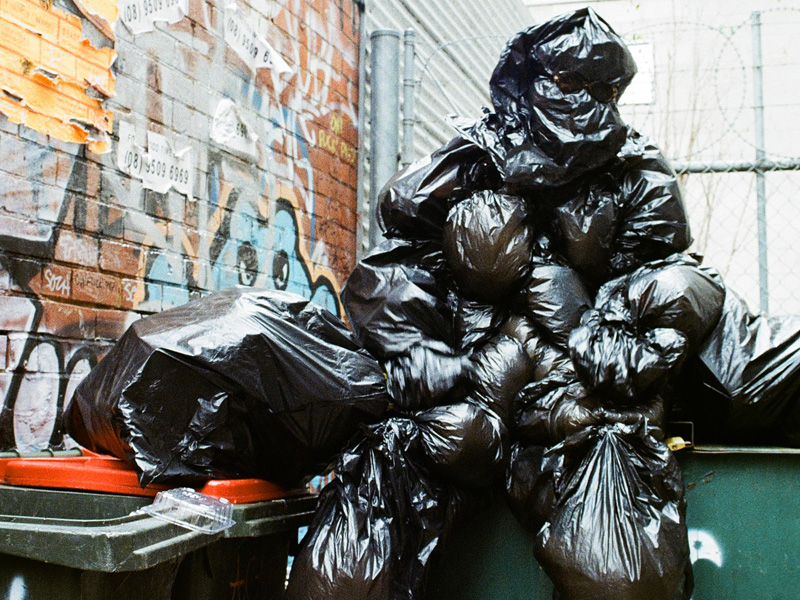 Despite both Ruciak and the band’s desire to leave the clip open to audience interpretation, we can be certain that the music video was a blast to shoot. When asked if they wished to add anything else about the clip or song, the band had only good things to say about the experience:

“We had so much fun filming this, we really enjoyed working alongside the team at JAR. We hope everyone loves the video and the song, like Jai said, it’s up for interpretation, for people to take what they want from the video, and I guess the message all together. I hope it makes people happy, and we can’t wait to put out some new music really soon!” 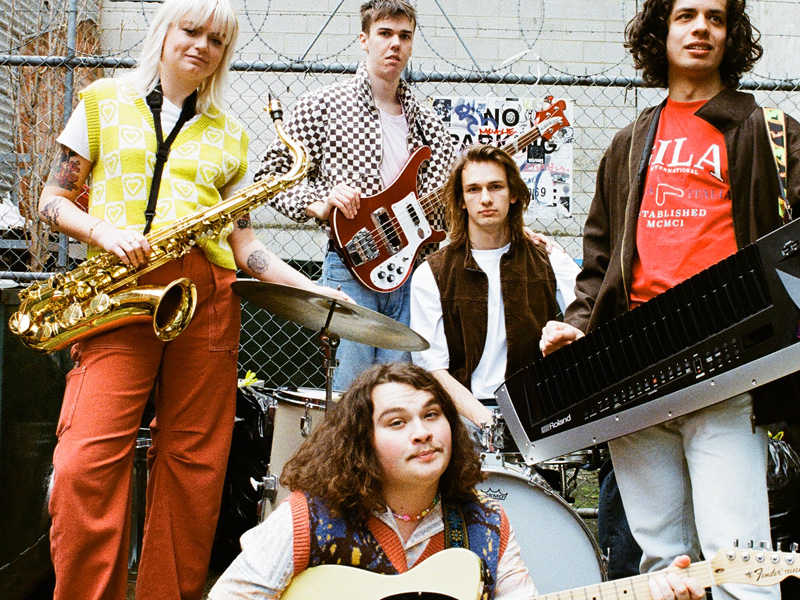 With the success of this partnership between Mum Thinks Blue and the team at JAR, we can only hope for more joyous collaborations in the future.

Here is the official video for “Side That Wasn’t Told”