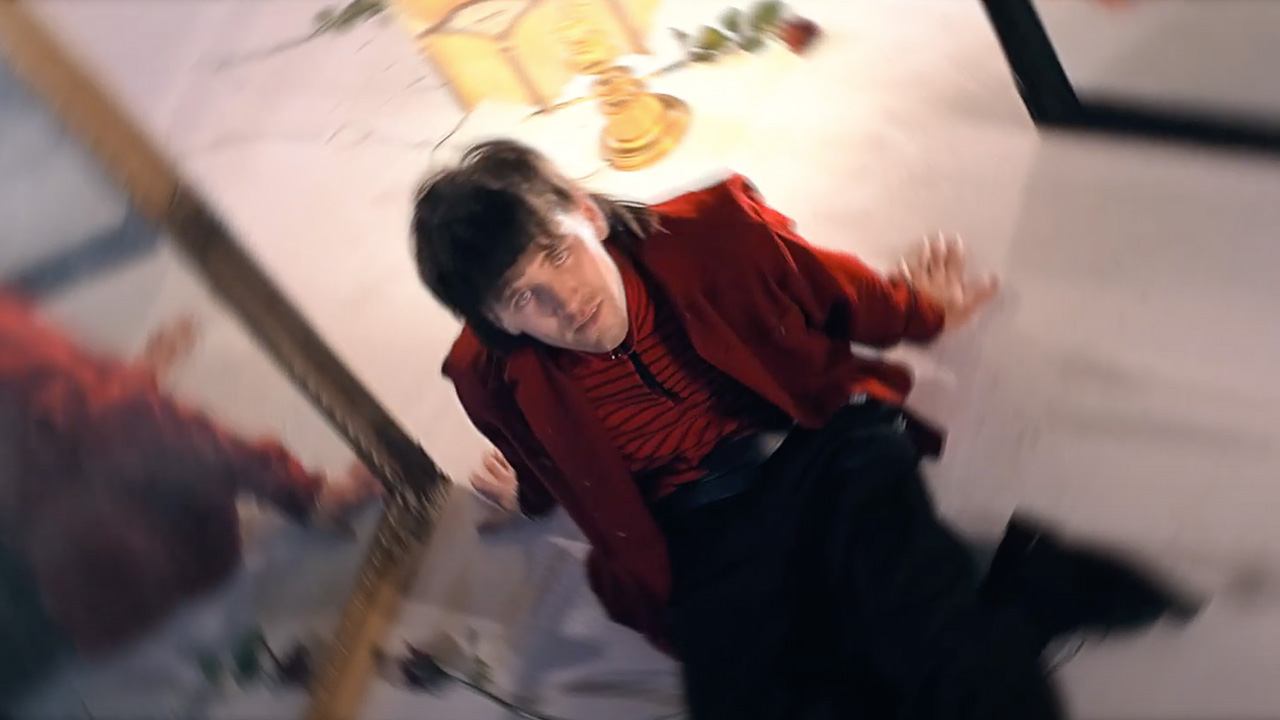 PRETTY BLEAK’s new track: “other people’s heads” is a nostalgic emo-pop ballad about the anxiety of being perceived in a technology filled contemporary. The track blasts off with an energetic reverb-filled riff that immediately transports you 20 years into the past before lead Sam Thomas sings lyrics that reflect with a uniquely modern anxiety:

“I wrote this song about the feeling of being constantly perceived as a result of social media’s influence in modern society. I was thinking a lot about the world before the internet and something that stood out to me was that in the current day, if you have an instagram account then at any given moment someone could be perceiving you and creating a model of your personality in their minds that you have very little influence over. It seems that in the past it would have been quite unusual to meet someone for the first time just to find that they already know significant and intimate things about you, and have developed specific judgements about those things without ever having seen or experienced your presence first hand. The lyrics in ‘other people’s heads’ are designed to describe both the uneasiness that any individual might feel about being in a situation comparable to that, and the absurdness of the fact that this paradigm has become the expected state of our social interactions.” 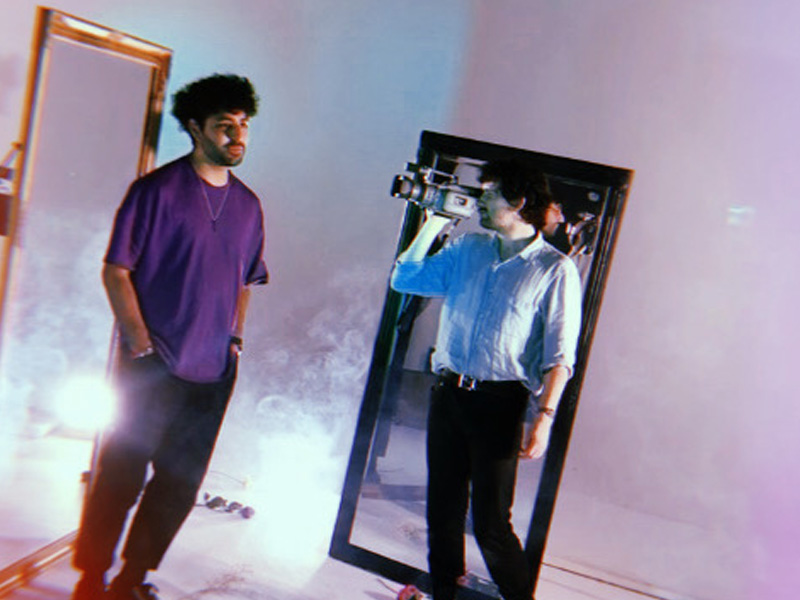 The bands’ longtime cinematic-collaborator Tom Thomas is responsible for the tracks’ fun energetic music video which cleanly elaborates on the songs’ main message while maintaining a playful and energetic pace which jumps back and forth between stylized performance shots and minimalist visual metaphors.

” As with all of our videos, we like to intersperse visual metaphors with intense performance shots that mirror the content of the lyrics of our songs, because we like the video to act as a coherent augmentation of the song itself. ’other people’s heads’ is an observation on the obsession our society has with the perceptions of those around us, and how this pathology is exaggerated by how prevalent social media is in our lives. The use of mirrors and cameras constantly reflecting and perceiving us throughout the video represents this element of the song’s meaning.” 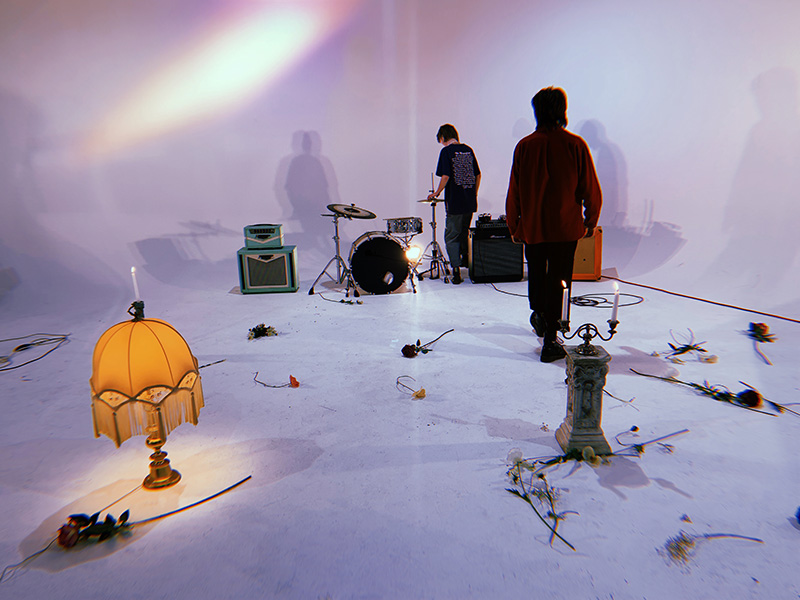 Stylistically, the video itself calls back to classic late 90s and 2000s MTV clips. It does so with it’s use of the cyclorama set and clean fluid camera movements while also maintaining a grungy VHS tape DIY vibe through continuous rhythmic cuts to ultra-stylized video-tape footage with a beautiful Sony VX1000, an old 90’s tape camera.

“Our intent with this video was to create a clean cut, stylistically ‘modern’ music video look, while still maintaining an element of grunge and grittiness to it. In order to achieve the more modern look, we chose to film on the white cyclorama with a lot of vibrant and coloured lights, but shifting to the VX1000 footage throughout the video created a contrast in the tone of the video, and contributed to portraying our more DIY and punk sensibilities.” 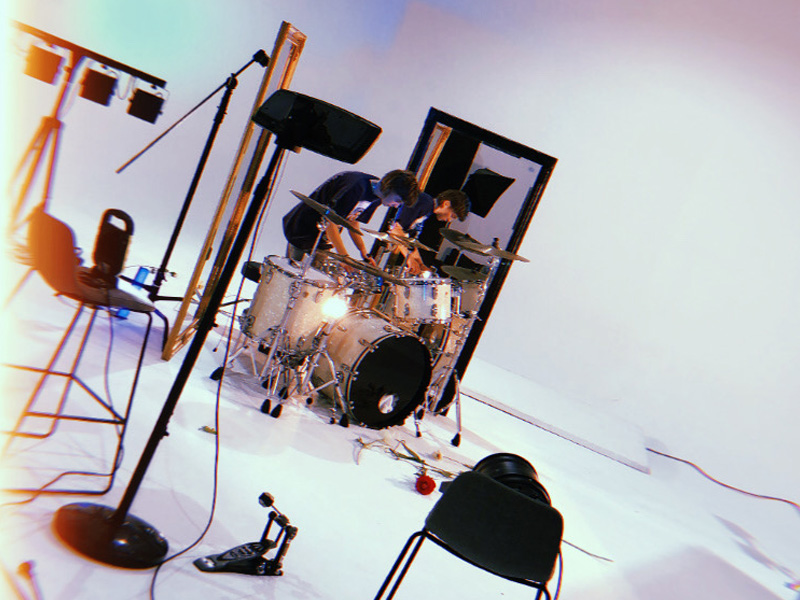 What we’re left with from the clip for “other people’s heads” is precisely this balance between DIY and sleek, grunge and modern. It is a dynamic not only reflected in the clips’ visual aesthetic and PRETTY BLEAK’s musical project but the production of the video itself – creating a space that is both professionally clean and minimal and playfully but intentionally grunge. Sam Thomas speaks about the production design involved in the clip, and the particular effort that went into finding props and orienting the iconic mirrors that make up the main symbolic centerpiece of the set.

“I originally came up with the idea for the video as a result of having one of those full body mirrors sitting in my house. After the concept began to develop I realized that we would need a second mirror so I found the gold one at an antique shop in Toorak that was listed on Facebook marketplace, and it now sits in my hallway at home. […] We had everything planned in advance pretty meticulously before the day, so we didn’t face many issues at all. The only thing we had to overcome was angling the mirrors in a very particular way in order to prevent the back of the warehouse from being visible. Luckily the studio had a few tall slabs of white styrofoam which we could strategically stand behind the camera, so that they were reflected in the mirrors. We had assumed before filming that we would be able to figure out a position for the mirrors to sit without creating this issue,but we were wrong about that, so we were really lucky that the studio had those lying around.” 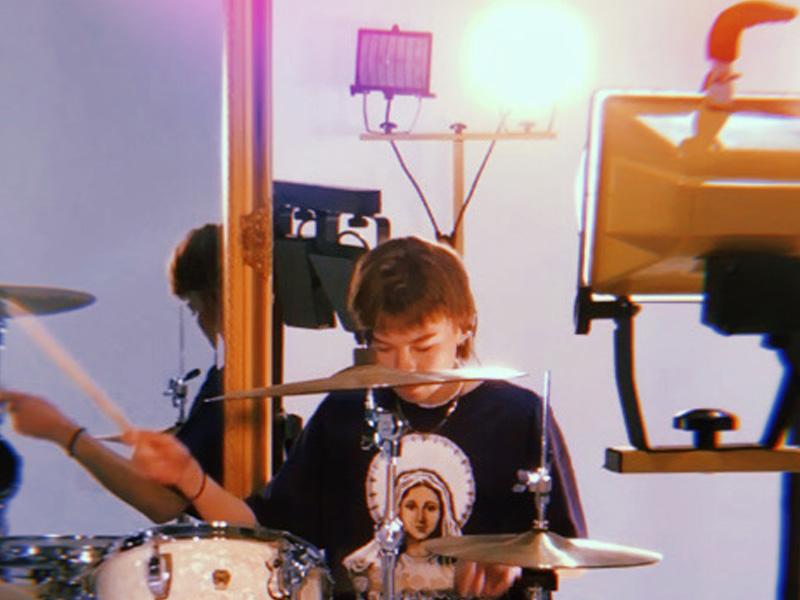 A collection of vintage cameras were used as props in the scene, including the very same Sony VX1000 that was used to shoot some of the footage. Other props include a Fujica film camera from the 70s that Sam picked up from a second hand market, and a film camera belonging to Tom’s grandfather. A Fuji XT3 mirrorless camera was used for any shots which required the Sony as a prop.

“To give the white cyclorama a little more dimension we also scattered some prop roses around on the floor. One of my favorite albums of all time is ‘Purple Rain’ by Prince. On the border of the album cover there is a white background with different kinds of flowers scattered on top. I always love the way it looked, and it served as a nice inspiration for that element of our video.” 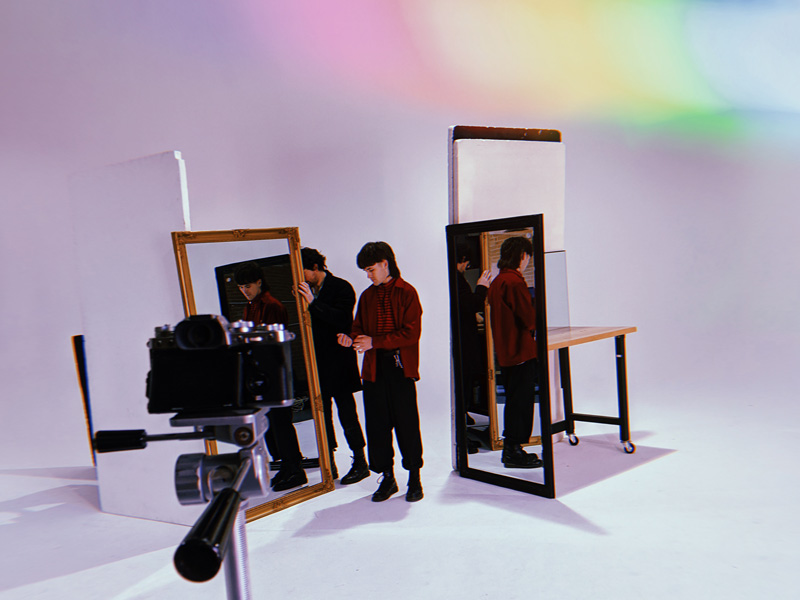 The “other people’s’ heads” music video marks an interesting point in the bands audio-visual journey as it is the first time the band and director Tom Thomas dipped their hand into working on a so called ‘professional set’ – a cyclorama at Monster and Bear Studios in Brunswick. Although, it is clear they made sure to maintain a healthy level of fun and energy on set which is reflected in the final piece.

“The shoot definitely felt a lot more professional than other videos we’ve made in the past as a consequence of having to set up in a studio and get the entire video shot in one day. It was definitely a really great experience for us though, and I think we had more fun making this video than any of our others.” 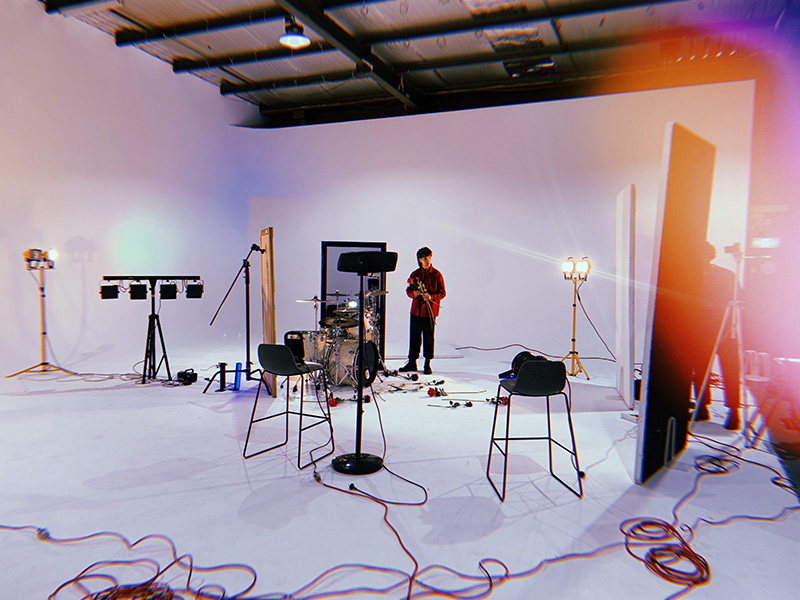 Another subtle aspect of production that is reflected in the music video is the unique “PRETTY BLEAK” visual style the band has curated through its’ long-lasting creative relationship with filmmaker Tom Thomas. It is beautiful to see such healthy, intimate and long-term creative relationships in the audio-visual industry as at the end of the day they always produce high quality art.

“Considering we’ve been working together for so long I think we most certainly have cultivated a specific style. I feel like we’re one of those bands who have a very unique and singular visual aesthetic, and we would not have been able to achieve that so far without Tom as a fundamental member of the process. Tom has an ability to create a visual that looks like what our music sounds like, and I feel like it’s really important that there is a deep continuity between our sound and the way our videos look in order to convey our aesthetic ideas. Something that we’re really happy about is that we’ve never made the same video twice.” 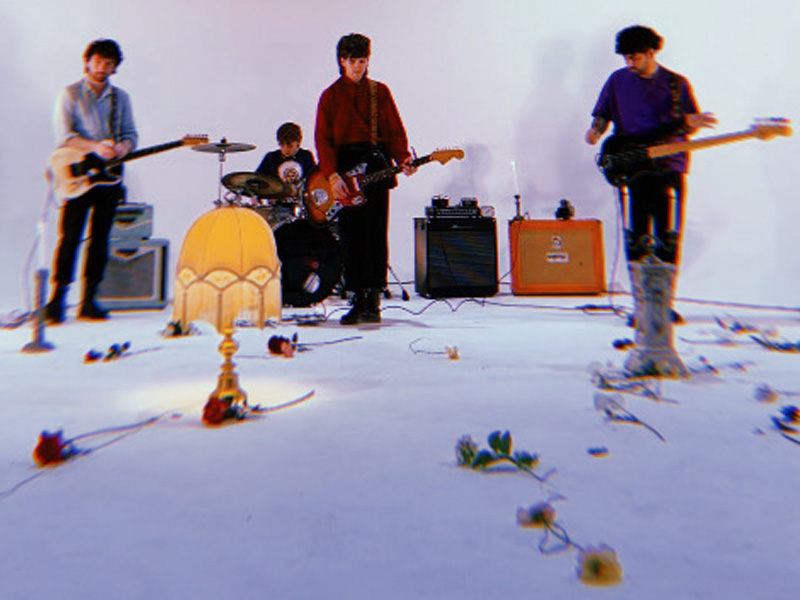 It is clear that PRETTY BLEAK hold their visual identity as important and have worked to curate a fun, unique style. That, combined with their unique creative relationship with director Tom Thomas and a line-up of new music recorded and ready to be released in the next few months, there is no way not to be excited to see what PRETTY BLEAK and Tom Thomas have to show next.

Here is the official video for “other people’s heads“