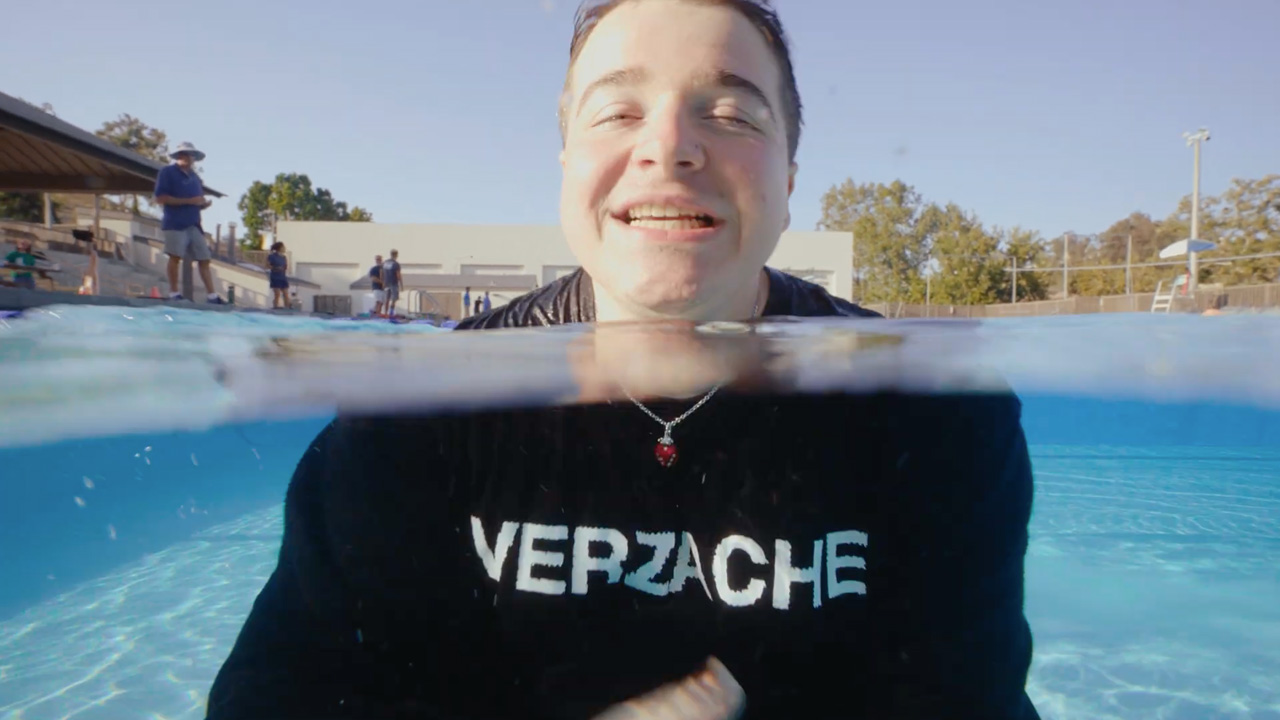 Standing atop the highest diving board at the pool, Verzache (alias of Toronto producer/songwriter Zach Farache) starts to have second thoughts. Trying not to glance down at his crush and her muscle-bound companion, he imagines being punk enough to go down there and confront them to prove his worth, but a frustrated lifeguard snaps him out of the fantasy with a blow of her whistle, and an embarrassed Zach flops down into the water below. So begins the series of teen comedy poolside misadventures that comprise “Feel Like”, directed by past collaborator Danny Farber. Considering the light hearted tone of the piece, it comes as a surprise that the original pitch was almost unrecognisable. Danny explains:

“My initial idea for the video was much darker with an underlying sense of existential dread and self-harm. The main lyrics for the song state ‘I feel like, I wanna die’ – so I initially took that pretty literally. After a few weeks of bidding out VFX houses and location scouting tall places and hospital sets, Zach told me he would rather approach the video more metaphorically. Within 45 minutes of that call, I had written the whole story of what we ended up shooting. I asked myself ‘when have I felt like I just wanted to die (socially)’. My mind went right to the high dive.” 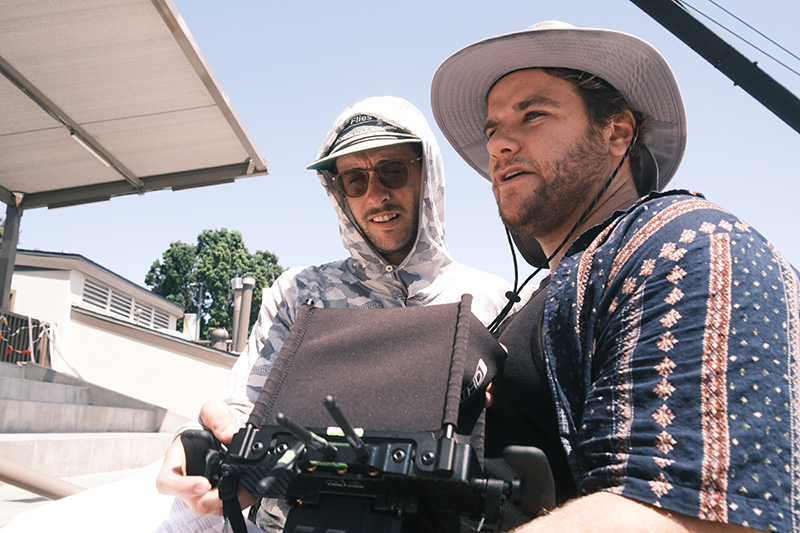 As easy as it might seem to find a suitable swimming pool for a project like this, the Los Angeles lifeguard shortage proved a significant roadblock and Farber’s crew had to travel quite far in search of one. The pool chosen as the clip’s location is the aquatic centre at Laguna Niguel which is sleek, clean and colourful. While Farber and Zach originally imagined something a little more rundown and gritty, the location’s aesthetic lends itself well to the vibrant and funny new tone of the clip.

“There was one catch though…a local dive meet would happen for about two hours, the afternoon we would be filming there. For starters, our shot list was insane and for most of the day we were living on a huge crane that wasn’t super easy to move around the pool. Not to mention working with minors on set, the direction of the sun, and having to coordinate when to shoot our leads wet vs dry, there were already a ton of things to consider. I remember drawing overhead diagrams of where to put the crane and that really helped me to come up with a game plan. The craziest moment was when the dive meet started. 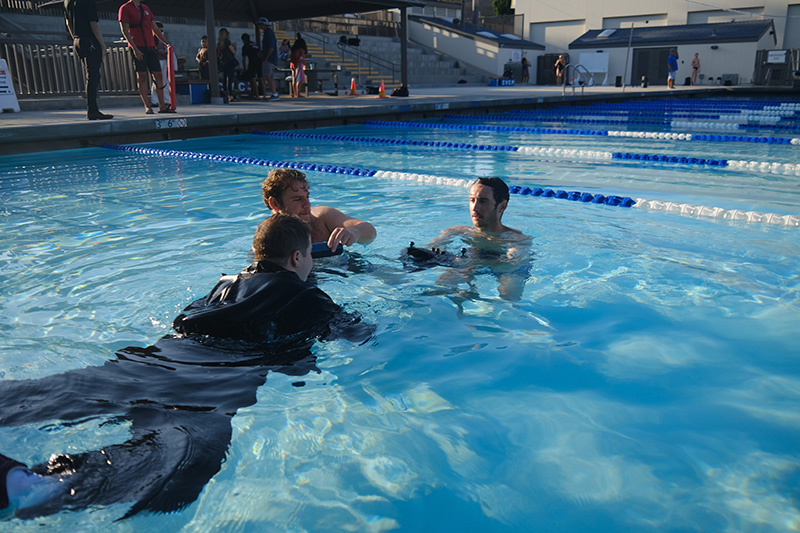 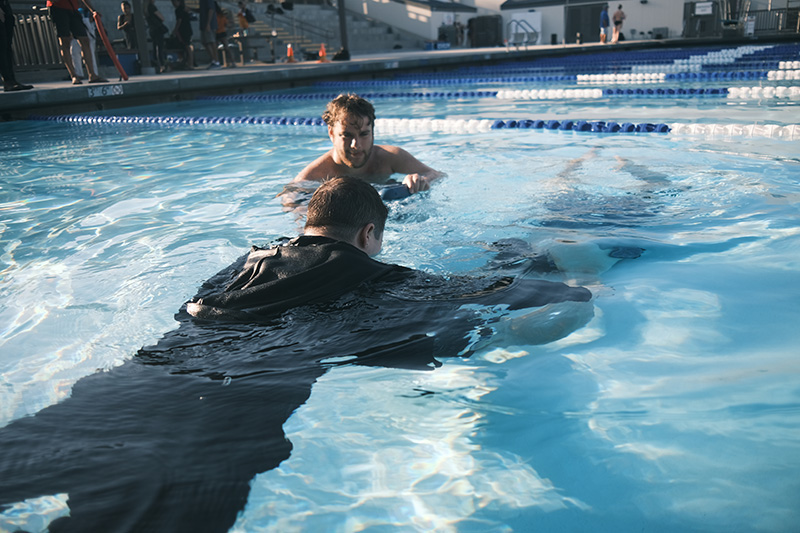 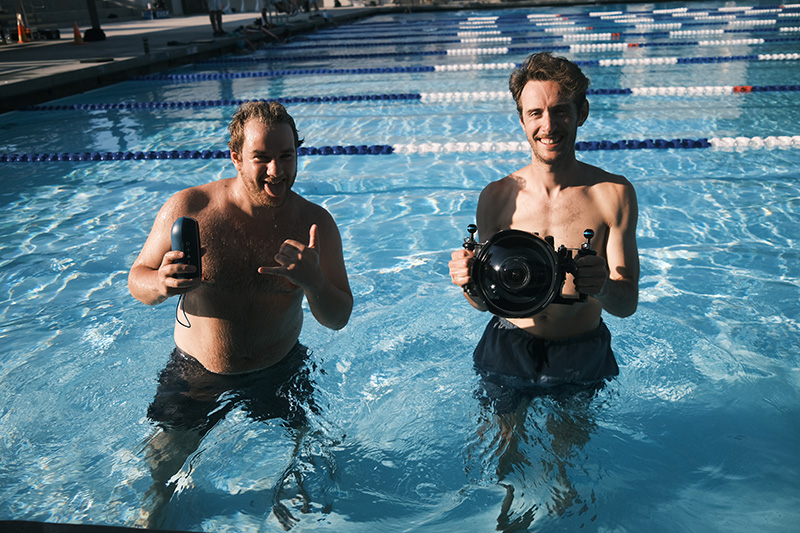 On top of the usual music video creative challenges including adhering to a schedule in a location with many variables, the team were working tirelessly on many fronts. Like always from the viewers perspective there were many more obstacles than would show up onscreen.

We had shot about 2/3rds of the footage and were in the middle of the scene where everybody is crowded around Zach and the lifeguard when people started to filter in. Before I knew it, there’s close to 50 parents in the stands we had just been filming in. Announcers are judging divers as they participated in their event. Luckily we were already shooting under a 12×12 foot frame of silk to keep the lighting consistent, it acted like a barrier between us and them. I looked at the 30 or so extras, huddled around myself and the camera and just took it one shot at a time while trying to drown out all the other distractions. It was intense.” 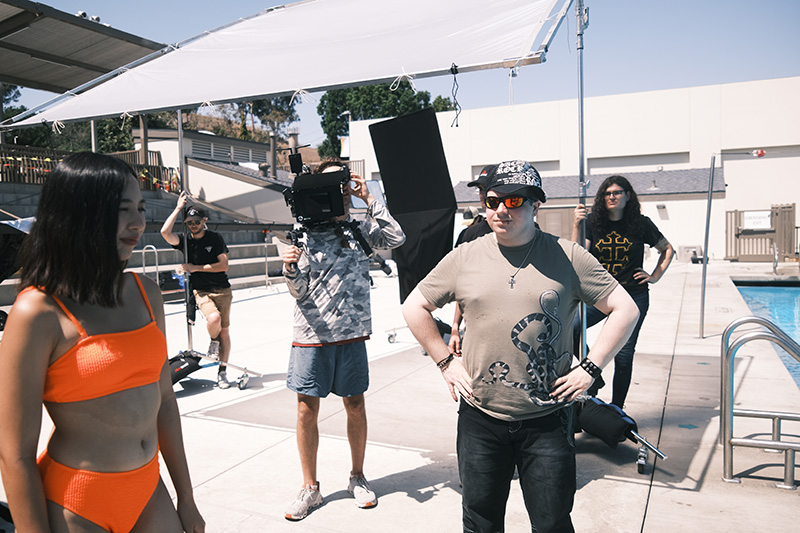 The tricky situation actually ended up being advantageous, because the professional divers who happened to be competing in the event gave permission to be filmed as b-roll. Their sleek aerial moves are some of the best shots in the video, and give further contrast to Zach’s poor diving skills. The whole clip is full of little details which show intention and humour; Zach’s black hoodie and track pants put him at a stark visual contrast to the bikini and boardshort clad pool goers. An intentional choice by costume designer Lyn Veliz, who also designed the over-the-top punk outfit that Zach rocks in his fantasy. The frustrated lifeguard gestures at signs that read “No Self Indulgent Heroic Fantasies On The Pool Deck” or “No Sandlotting” (a reference to teen sports comedy The Sandlot (1993) which was a big reference for the clip). Micro stories play out in the background of long shots; guys flipping off their friends, old timers huddling for gossip. The whole scene is alive.

“The camera swoops down on the crane, as women in bright primary colours flip from their stomach onto their back while suntanning. Two gawking teen boys get caught and sheepishly walk away as camera pushes past them and lands on a group of men who are lathering themselves up with lotion. Behind these men, two gawking teen girls get caught checking out the guys and they scurry off deep in the frame. The men laugh and the camera cuts. It’s only 8 seconds but was something I spent hours of my life blocking out in my head. I wanted the reciprocity between the boys and the girls getting caught. Often times in pool scenes we see women being objectified so for this I wanted to even out the scales by having it happen to the men as well.” 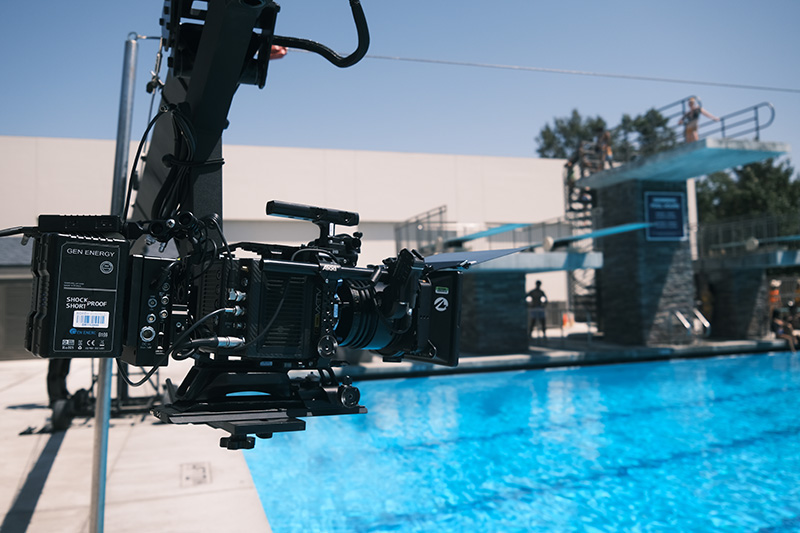 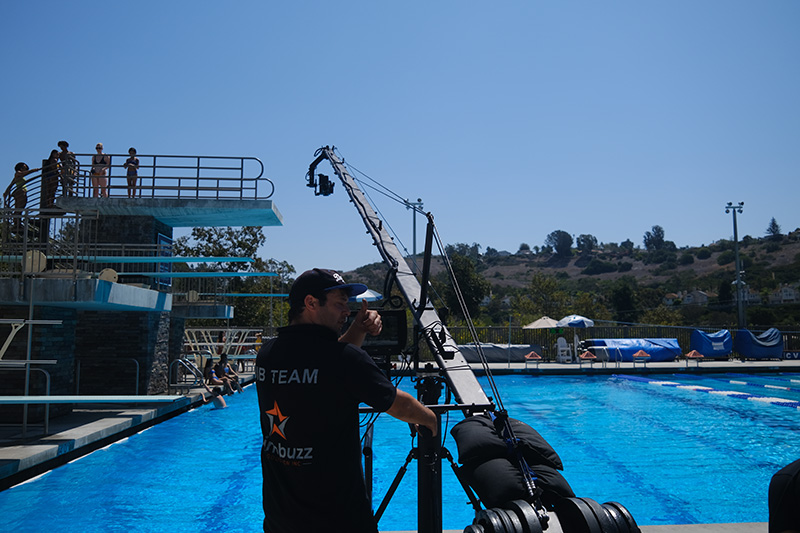 The majority of the clip was shot on a crane-mounted Arri Alexa, with DP Will Brunker taking a dip in the pool with a waterproofed Sony A7Siii for the underwater scenes. Shooting in full sun can run the risk of washing out all the colours in a frame and leaving you with flat footage. Luckily, Danny had the talents of Brunker, who knew exactly how to handle the harsh lighting conditions. Brunker remarks:

“I wanted to go for a sun soaked, hot day at the pool look. That meant being right on the edge of overexposure, knowing we could pull back the colours in the grade. We had one light on set and it didn’t even get used. I primarily relied on larger frames of diffusion, bounce and negative fill, using some mirror reflectors to punch in some hotter light when needed.” 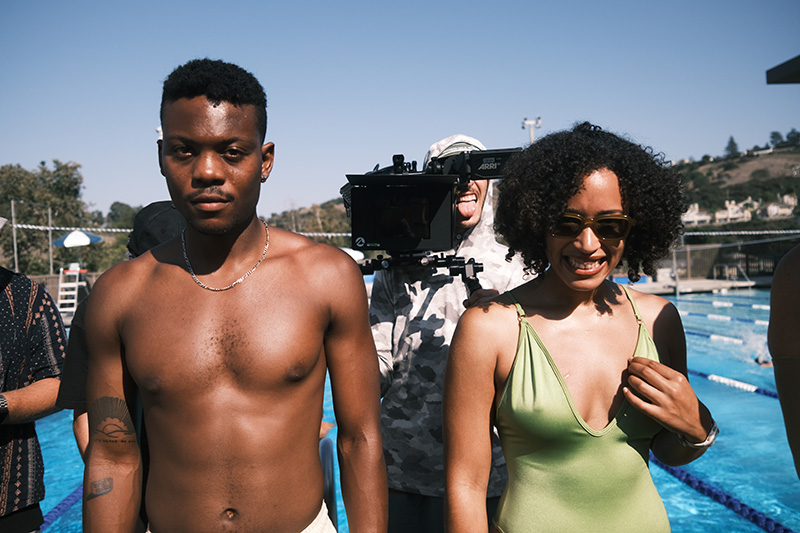 With two great videos produced from this collaboration between Farber and Verzache, it bodes well for their future endeavours. And whether it’s the top of the diving board in the summer sun, or a darker, edgier reading of the song, the next clip is sure to entertain.