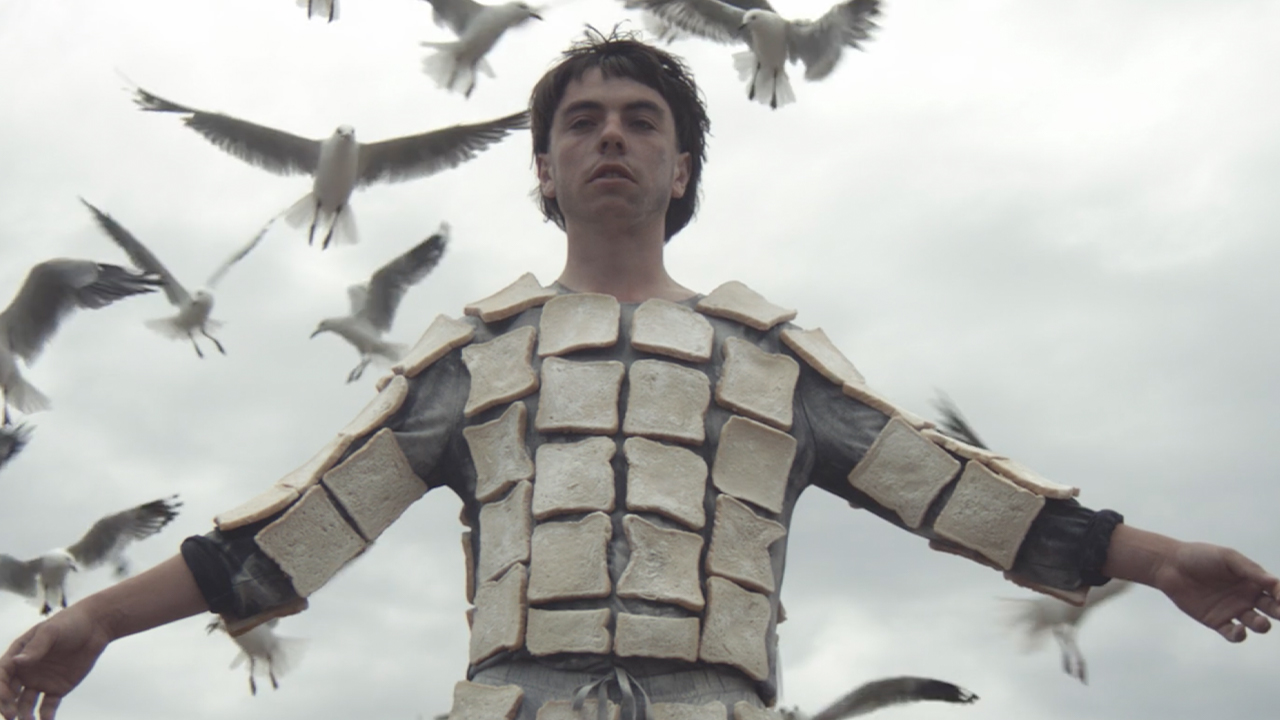 [dropcaps type=’normal’ font_size=’60’ color=’#ed145b’ background_color=” border_color=”]W[/dropcaps]hen the world goes to hell, it takes a little bit of creativity and ingenuity to survive. When director Thomas Pike came to conceptualising his video for Melbourne outfit Mount Defiance’s song “New Neighbourhood” he found himself pondering this scenario. “The concept came about by considering what were the most absurd ways to survive in a post-apocalyptic setting. Really not sure why, but the story kind of just tumbled out really naturally from there.”

What we end up with is an unlikely duo, perhaps forced together by the harsh world they now find themselves in, trudging through a bleak and bereft landscape in search of the means of survival. When they happen upon some ingredients in an abandoned warehouse, they devise a plan to use bread to lure in some more appealing provisions. 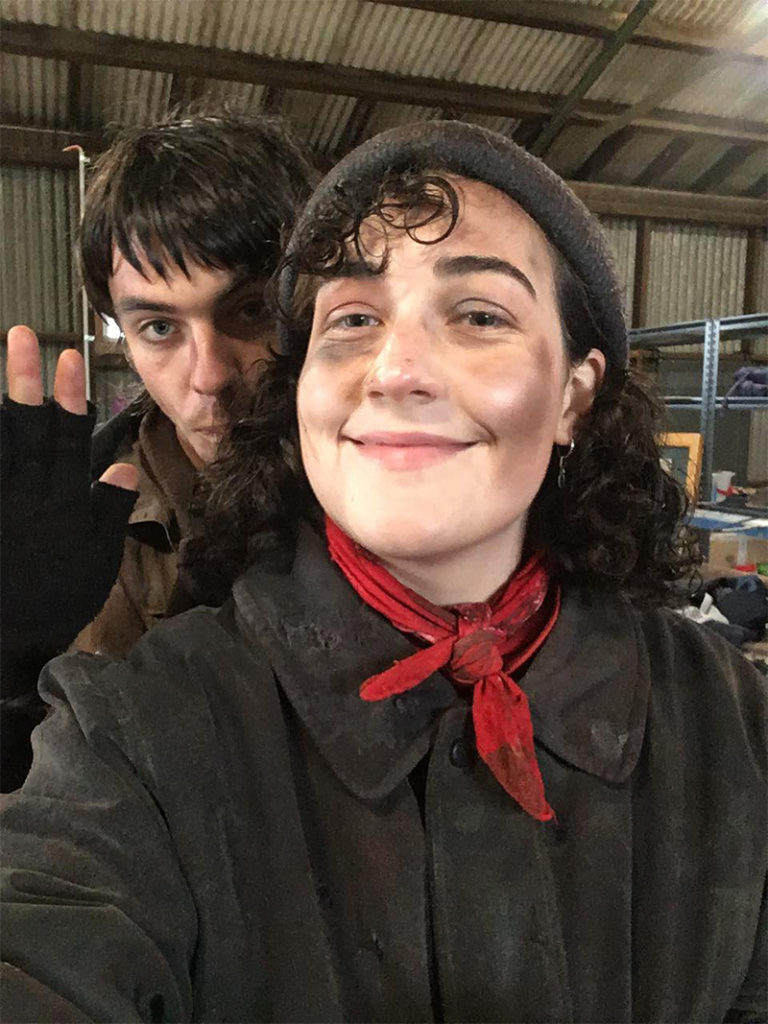 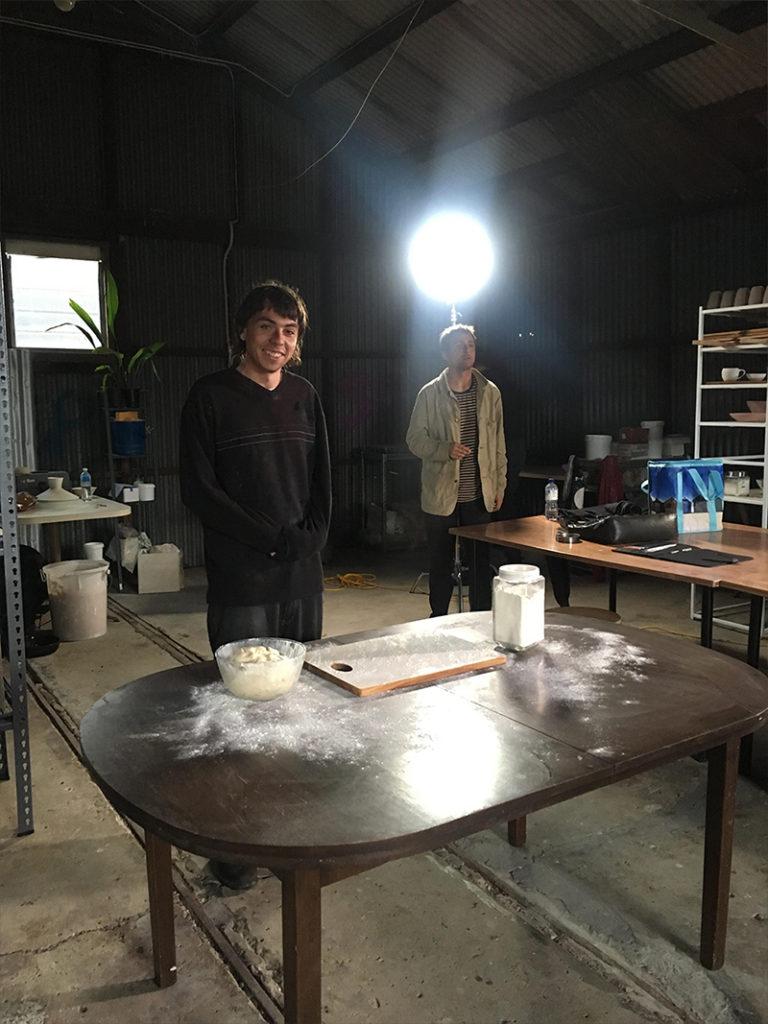 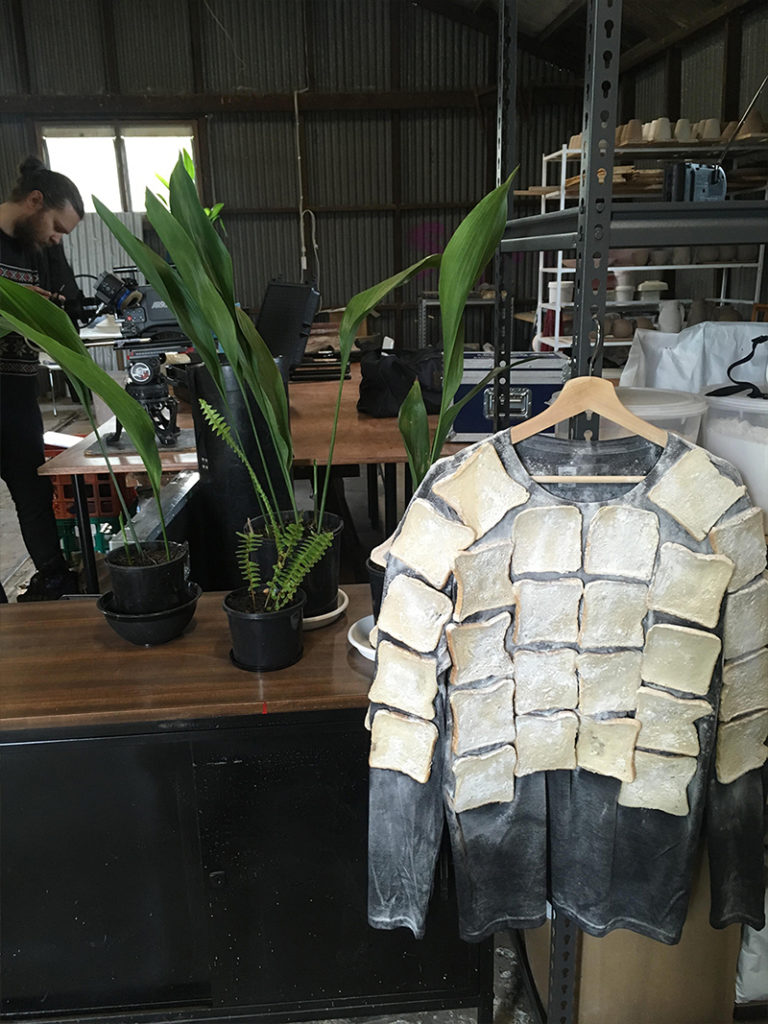 Even though the mood of the video lifts as the duo’s plan comes to fruition, when we are first introduced to our characters, we can really feel the seriousness of the situation through the directing. This was always a goal for Pike. “I’ve always found that if you are making something absurd you’ve got to treat it seriously. It gives credence to the characters and their motivations and if anything, it heightens the ridiculousness of what is unfolding. Shoot it like a serious drama, even though it’s about a man wearing a bread suit to attract birds so his maniacal partner can shoot them and then eat them.”

Pike continues: “For this video in particular, I think the post-apocalyptic feel really makes that tonal shift funny, the stakes feel high even though no context is provided, and the characters seem desperate and therefore oddly justified in their actions. Using a well-defined genre in a music video is also really advantageous, as by using a few basic tropes an audience can recall a lot from what they’ve seen before, allowing me to remain skint on details whilst instilling a lot of useful preconceptions onto the viewer.” 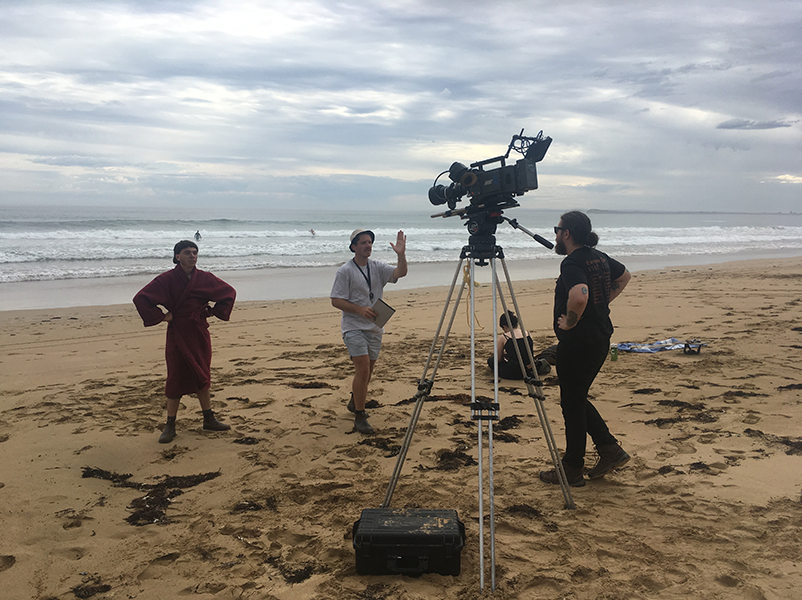 This original serious tone is delivered through every element of the presentation. The video is very stark and grey in colour, the main characters are dressed in drab worn out clothes, and are dirty from their exploits. As their scheme takes flight, so to speak, so too does the energy of the video. This stylistic shift was always on the cards for Pike, though it did get a little help from some very fortuitous weather: “At the very end I really wanted it to feel like they had achieved something miraculous, even though all they had done is massacre a bunch of birds. So, her last shot shifts to slow motion and is from a really low angle, and we also get a smile from him, which is the first time he breaks from his usual cretinous stare. As for the sun coming out, that was because the sun came out. But it was a very lucky occurrence that heightened the ending and made it all feel very heroic.”

It’s easy to see where the song has influenced this approach by Pike as well. “New Neighbourhood” features sparse and reserved verses, making use of guitar stabs and rising movements to build the dynamic coming into the choruses and the crescendo.

Pike embraced these rhythmic queues, using them to inform the way he edited the video: “Going into the edit I really wanted the rhythm of the song to line up with the story beats. It really frustrates me when a music video is just a series of rhythmic cuts, but nothing changes in the story. There are way too many videos of stuff like… Someone walking in a field, and the pace of editing changes with the song, but they are still just walking in a field.”

Pike continues: “I actually like to do a mock edit before I shoot, where I put text down describing the shots over the song. I don’t stick to this, it always changes once you shoot, but it helps me know if I’ve developed the idea enough, if there are sequences that might drag and importantly if the story evolves with the progression of the song.” 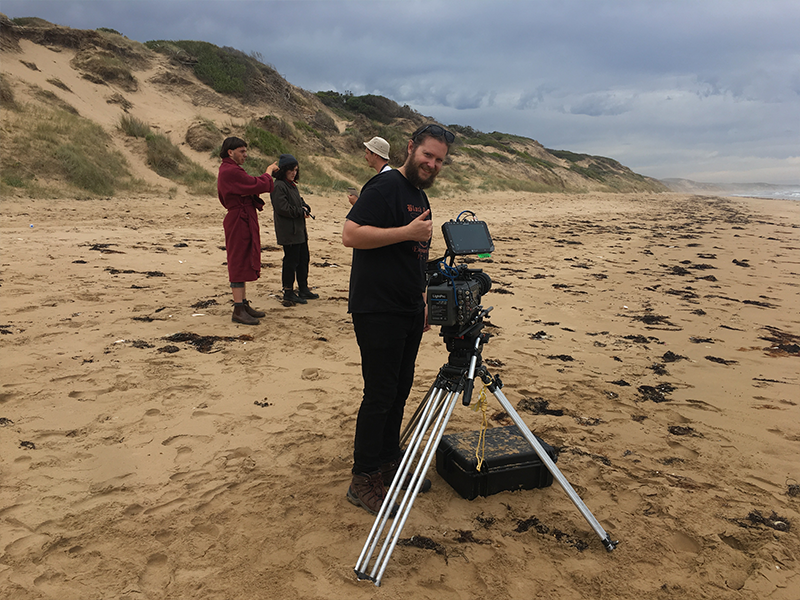 A really interesting element of this developing story is the relationship between the two characters. They feel almost uncomfortable with each other, hinting at a relationship less like a friendship and more like like a master/servant or even a hostage situation Pike even goes as far as to credit the characters as “The Boss” and “The Mule”.

When asked about this awkward alliance, Pike replies: “It’s not really the answer you want to give, but the dynamic really came about because Gareth (Morgan), who plays ‘The Mule’ isn’t a trained actor, so I wanted to give him as little to do as possible. I started calling him ‘The Mule’ on the first day of shooting, as his direction. Where I basically told him, treat it like you have no thoughts of your own, you’re here to carry shit and to do what you’re told… Like a mule. As it turned out, he is brilliant in front of the camera, and was able to do a lot with his blank stare.” 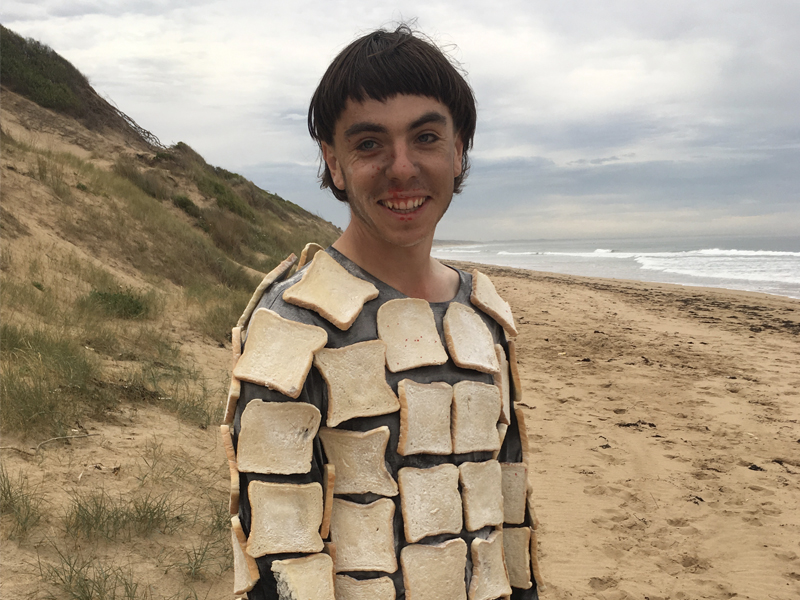 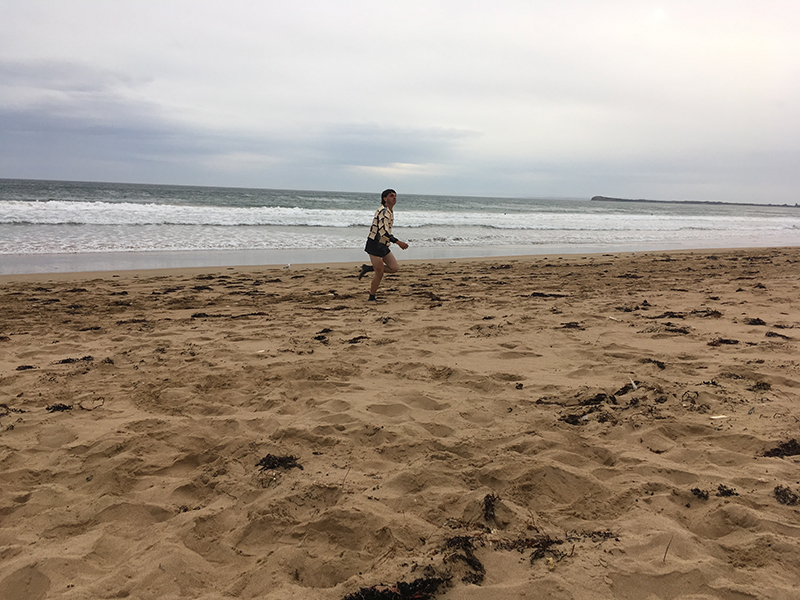 Pike was again blessed by a touch of fate or at least something approaching a happy accident here, as this character direction and the subsequent tension of the relationship brings a really interesting flavour to everything that happens between them. Pike says: “Thinking about it now, I’m not really sure that any other character dynamic would have worked. It really played into our hands nicely, the mix of this subservient male and a hardened woman, doing what needs to be done to survive. It really drives the story and creates tension.”

These almost serendipitous moments really speak to the heart of independent filmmaking. While a strong creative direction and meticulous planning are key, the ability to think on your feet, pivot and adapt to whatever the shoot throws at you, finding the value in the subtle differences rather than working against them, is an attribute of immeasurable value in a director and their crew. Much like being able to whip up some bread for an elaborate seagull hunting scheme, it can be the difference maker in a music video’s success and survival.

Here is the official video for “New Neighbourhood“