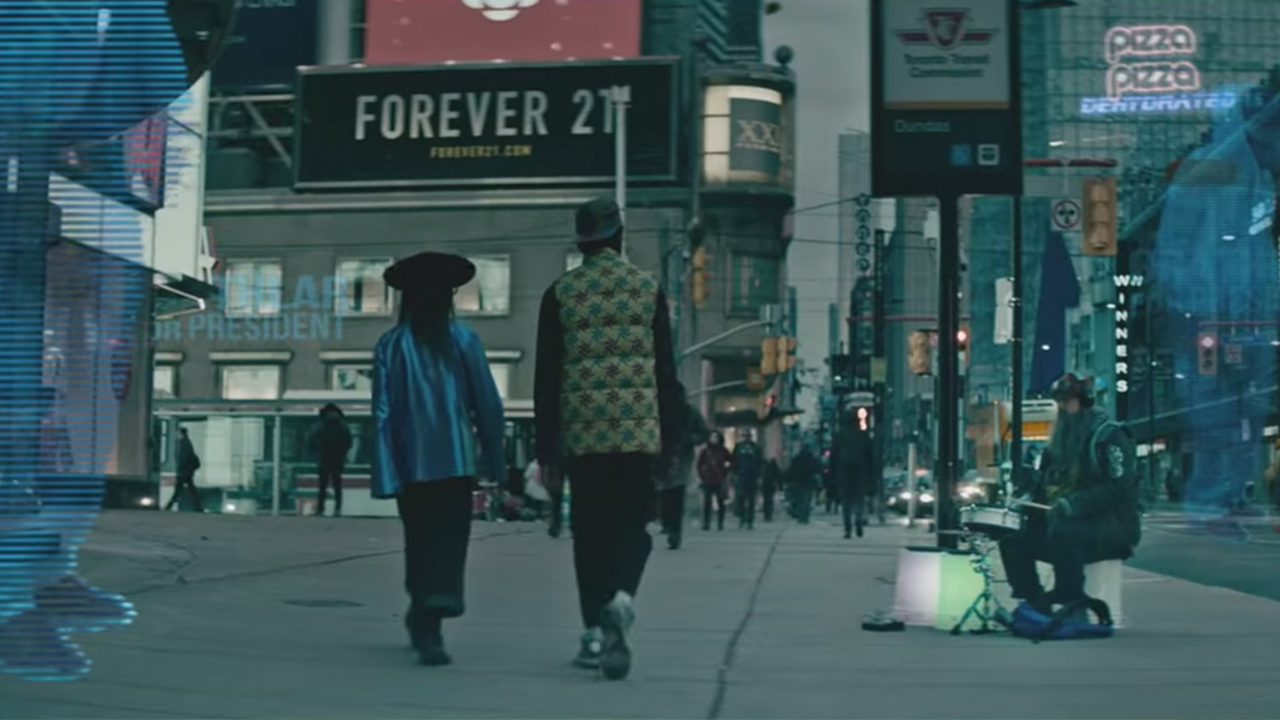 Jeremy Schaulin-Rioux has a lot of history with PUP having put together eight previous videos for the band. When asked to define why that working relationship keeps throwing up gold, Schaulin-Rioux couldn’t put it down to just one factor. “I think the videos mostly all turning out well is because of a bunch of things. The first is that the band is the best, they make music I love and get I super excited to get to hear and that really fit with my favourite kinds of stories.”

“They’re also the greatest people to work with, they’ve got this crazy mix of being legitimate by-any-means-necessary punk rockers who tour non-stop and throw themselves into the fire every night, while also being hardworking pros who show up with energy and ideas, drive film gear around, build props etc, and want to make things rad for their fans. We’ve always tried pretty hard to capture that in the videos and I think a lot of what’s good about them comes from that bleeding through. Since pretty early on, making videos with them has felt like a bunch of friends hanging out, bouncing kooky ideas around and working together to make things that support the music.”

From graphic, extreme and yet somehow still playful violence, to all your favourite childhood video games, to animation and a form-breaking interactive music video game, every time a new video from these collaborators has dropped it has been a fresh and original take on the format. However, despite all the praise that can be heaped on the aforementioned efforts, Schaulin-Rioux’s most memorable collaboration with PUP almost definitely comes in the form of the origin story saga. 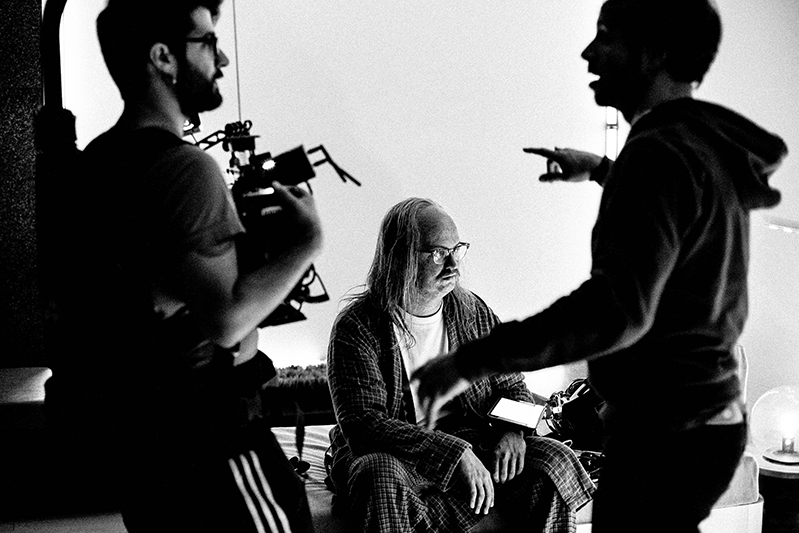 It all begins with “Guilt Trip”, where we are introduced to the boys as kids. Runaways, misfits and outcasts, they find themselves bonded forever by a murder-secrecy pact and their shared escape route through music. A heart-warming tale of adolescence, unlikely allies and just wanting something to belong to.

The story continues with “Sleep In The Heat”, where the guys, still flowering adolescents, are now a touring band. Scraping their way from city to city, from house show to basement, all that’s driving their beat-up van is syphoned fuel and determination. When a stray dog joins their troupe, frontman Stefan Babcock (played by Stranger Things’ Finn Wolfhard) finds a new reason to keep going. When their dog gets sick, Stefan has to make a tough decision between his pal and his band. It’s an absolutely brutal video that is guaranteed to get any fur parents real misty-eyed.

Flash forward forty years into the future and from the moment the aging Nestor Chumak (bass) cops a vicious “Fuck off, Dad!” from his teenage daughter in the clip’s opening, it’s abundantly clear we’re about to see PUP in a very different world and leading very different lives. While Nestor tries to connect with his daughter Steph, drummer Zack Mykula busks in the cold future streets of Toronto. Guitarist Steve Sladkowski is a futuristic fashion mogul and frontman Stefan is… Well, we don’t know. 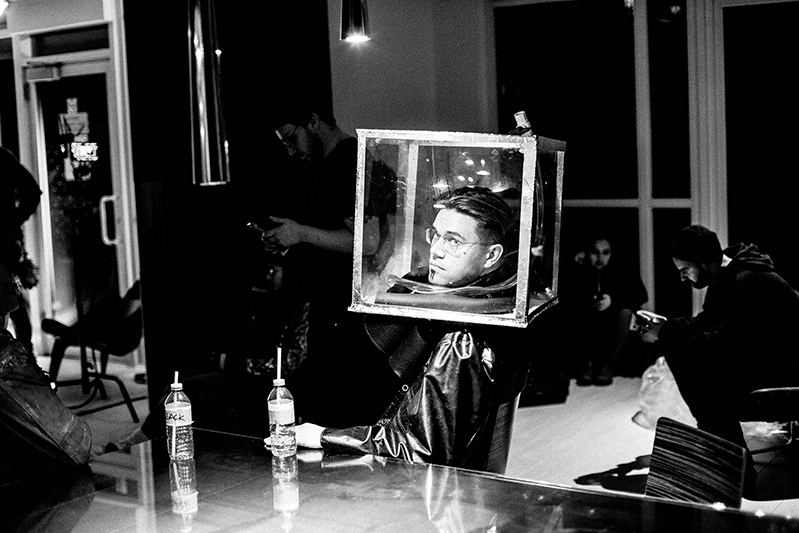 We gradually become aware that the band split some years ago after a devastating headline-making bust-up and haven’t been around each other since. When news begins to spread that the reclusive Stefan has been sighted and is deathly ill, Steph spearheads an effort to reconcile the band before it’s too late.

When asked how this concept and expansion on the story came around, Schaulin-Rioux replies: “They sent me the new record (which is gonna MASH everyone up in a few months btw!) and said they were looking to do an early video for the song “Kids”. I pitched them a few very dumb ideas including “what if it’s 40 years later and you’re all old and have jobs and the future is shitty.” Then we hung out a bit and they came up with a bunch of insulting (and way too real) futures for each other, which all kind of coalesced into this continuation of their story.”

While dripping with that wonderful PUP/Schaulin-Rioux irreverence, “Kids” is also delivered with an undeniable truckload of heart. Particularly in the moment where Nestor learns that his distant daughter has been a die-hard fan of PUP all along, and especially in the closing scenes of the video where the mates reconcile. The final shot is damn near devastating in its stark poetic symbolism. When the guys dig their own graves in plots next to their late friend Stefan, we learn that they started together and they will end together. 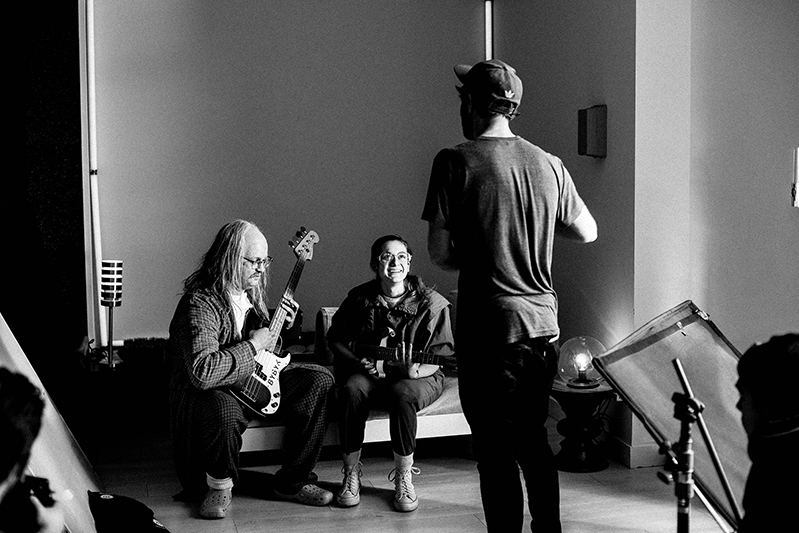 Schaulin-Rioux has really put the work in building this future world and has clearly had a lot of fun doing it. Coming up with fun Beyond 2000-esque gadgets and icons like a self-walking dog, a brain implant for texting and Steve’s anti-ageing fishtank headgear. Not to mention a few nods to some of the great and iconic sci fi of the last couple of decades, from the dehydrated pizza and hoverboards of Back To The Future to the three confusing toilet shells of Demolition Man.

“Yeah, that was the most fun part. PUP were on tour for the first week of prep so they started a google doc of shitty future jokes that we grabbed most of the ideas from and then our production designer Alexis Debad worked with Zack (Mykula, drummer – A graphic artist in addition to his work PUP) to build all the technology. I definitely got a lot of text message pictures from both of them of wired together VR headsets and speakers with water tanks in them. Steve’s helmet was another one of those jokes that someone in the band called out and we all laughed at, and then you get there on the day and the thing’s huge and heavy and impossible to walk in and keeps fogging up and you’re going “who’s idea was this!?” Anyways it’s been very gratifying having people notice the three seashells and idiocracy jokes (though I don’t think anyone’s spotted my incredible, Hitchockian cameo yet).”

Aside from the wonderful story telling, there are so many production factors and roles that have gone into making “Kids” such an enjoyable watch. “We’ve been very very lucky to have a whole bunch of world-class (often repeat!) collaborators come on to the videos; incredible actors and DP’s and production designers and producers and the team at Mad Ruk etc, and then they become part of this small family of pals making stuff together. For “Kids,” I want to shoutout super-producer Amanda Fotes, DP Diego Guijarro and new star Jessica Avsenik, amongst a bunch of others who put a tough project on their backs.” Among those previously mentioned, special commendation has to be said for the incredible age makeup on the band members by Andrea Brown and Indiana Allemang. 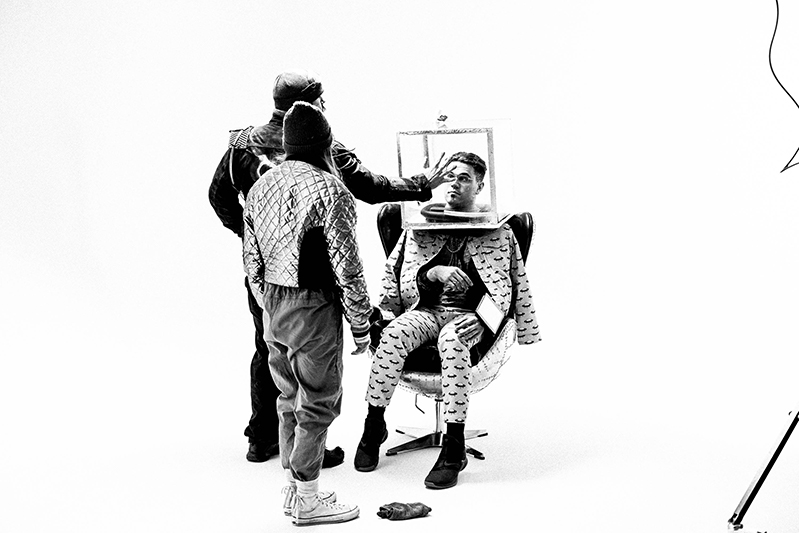 Even though “Kids” takes us to an illuminated future world, Schaulin-Rioux manages to maintain the same bleak and gloomy aesthetic present in the two earlier instalments in the saga, particularly when depicting the band. This restrained colours and practical-look lighting approach anchors this video not only in the PUP cinematic universe but also in reality, helping the audience to remember that beneath the science fiction setting and the whacky gizmos, there’s a real story of love, loss and enduring friendship being told.

“The DOP’s and production designers (and Zach Cox, the colourist) of those videos did some really beautiful work in creating the look and feel. I think we all have gravitated towards classic (and cult) coming of age feature films as touchstones. Those are pretty much the stories and styles that raised me, that I still love best. For “Guilt Trip” it was a lot of watching Stand By Me and Son of Rambow, for “Sleep In The Heat” maybe add in some Hard Core Logo, White God and Over The Edge, and for “Kids” we referenced a lot of 80’s anamorphic cult sci-fi, especially Blade Runner, Escape From New York and obviously Back To The Future 2.”

“So, I think we try to emulate a bit of the classical way those movies go in on emotions without losing their grit, and part of that I think has to do with the lighting and texture of what’s onscreen. Trying to find the humour in fucked up lives, and keeping things punk and a bit raw yet still trying to move people is sort of what I think PUP’s music is all about, so anyway we can match that with the videos is the goal. Also, lots of grain in the end product!” 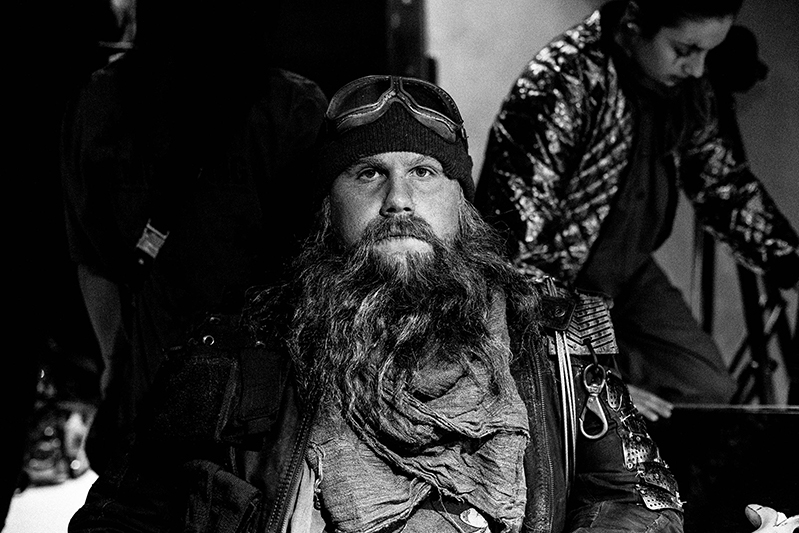 Schaulin-Rioux’s talent for telling a story is unquestionable. The way that he takes the time to set up the world and the circumstances for each of the characters pays massive emotional dividends down the line. PUP and Schaulin-Rioux’s growing reputation as putting out quality video after quality video is entirely warranted and on full-on holographic billboard display in “Kids”.

Here is the official video for “Kids”