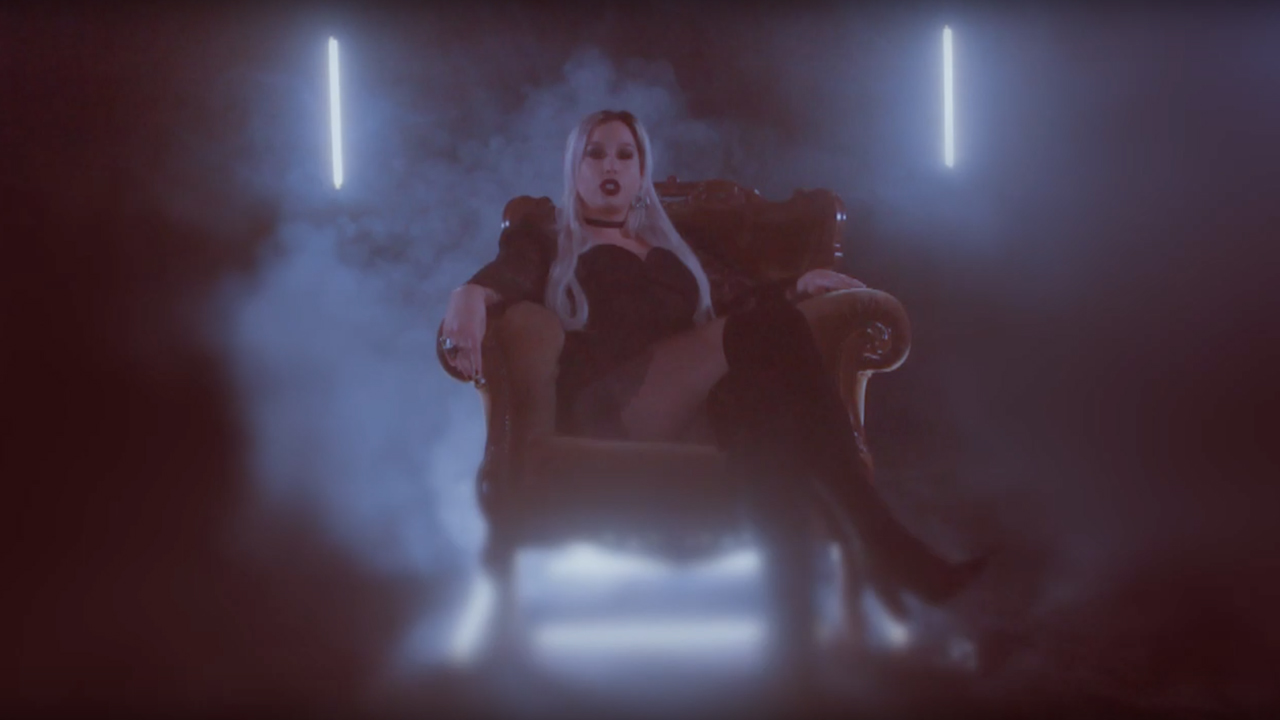 When The Last Martyr approached Blackley with a demo of “Fear”, it was the familiarity of their working relationship and the shared goals he and the band had that immediately told him that things were going to work. “I had worked with Monica (Strut, vocals) before in her previous band, so there was already an element of trust established which is obviously a great place to start. They were really open to running with ideas and pushing for something unique.”

Once he had the source material, the concept flowed pretty naturally from there. “I spent around a week designing a treatment for the guys which was based on a series of images I associated with the word FEAR, primarily focused on self-perception and inner turmoil. From the very beginning I wanted this video to be a visual buffet rather than a cohesive narrative and I wanted the band to be responsible for delivering that. Fear, insecurity, self-doubt; all of these emotions can be crippling and very alienating. That’s why I decided to mainly shoot the band singularly and avoid a lot of group scenes.” 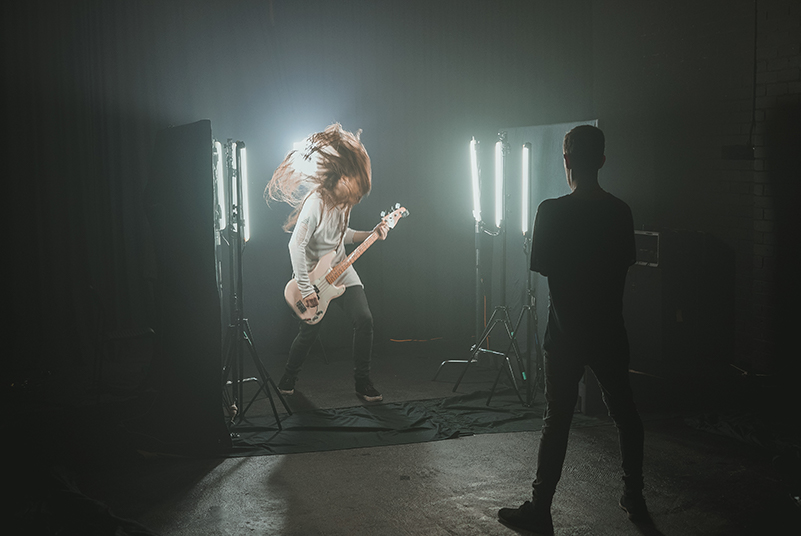 From the very outset we are introduced to the world of “Fear”, a dark and glitchy place where paranoia reigns. The use of gloomy lighting, quick rhythmic cuts and a seldom stationary camera all contribute to this feeling of unease, which was Blackley’s goal all along. “Essentially, I wanted “Fear” to feel like sleep paralysis. That’s why I wanted the lighting set ups and the various designs to feel surreal, disorientating, claustrophobic and definitely not natural or realistic. They had to come across like fabricated projections from the mind.”

This overarching unsettling feeling is enhanced by the use of glitch effects throughout. Blackley’s practical approach to this aesthetic would nowadays be considered unusual or unorthodox, something to which he attributes his love for 90s film and music videos. “I try to achieve as much as possible in camera and on set with every video I shoot. Within our style, VintageHD, I enjoy playing and experimenting with this practice. I grew up in the 90’s, so my biggest inspiration comes from music video aesthetics from that decade and directors like Dean Karr, Samuel Bayer and Gavin Bowden who were very hands on in their approach and style… HNIMP shoot a lot of documentary work, which means I often find myself in very impromptu situations where I have to utilise what tools are at hand at the time. This creates lots of lovely accidents and things that you simply cannot recreate in post-production.”

Blackley continues: “The distorted looking fisheye imagery throughout the video was one of those happy accidents. I was having Christmas dinner with my family and we were pulling bon bons and inside mine was a mini magnifying glass. This suddenly gave me an idea that put the icing on the cake. I ran the original footage (which was shot with my Canon 7D) though a flat screen TV and with my old handycam I recaptured it with the small magnifying glass in front of the lens. This morphed image works really well to emphasise the warped effect fear and paranoia can have on a person’s mind and their perception of reality.” 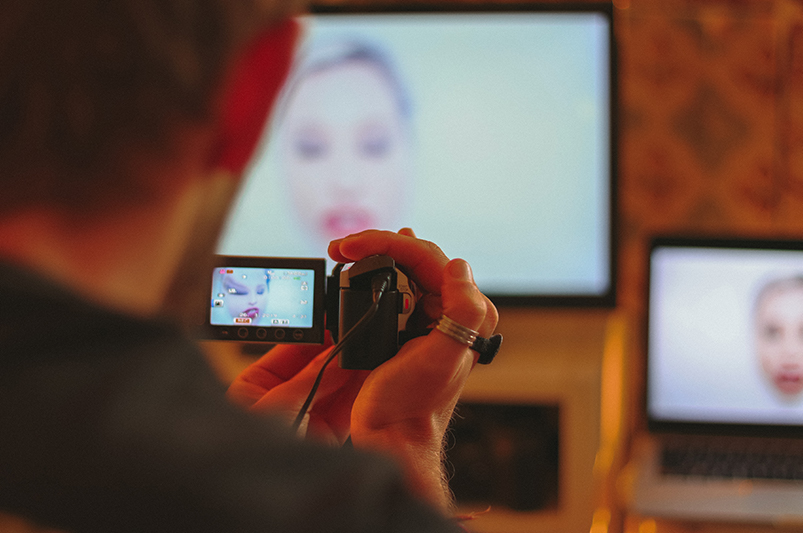 Shots of vocalist Monica Strut up to her ears in a bath of milk are dispersed throughout the video, acting as brief moments of relief for the viewer. This contrast was important to Blackley. “I’m a big fan of juxtaposition. We work with artists from various genres and it’s always fun to mix up those visual aesthetics from video to video. I like to include scenes that break down stereotypes and challenge what someone may expect in a music video because of how that band may sound or what “scene” they are from. With the bath of milk, I primarily wanted this to be a visual breath of fresh air from the fairly dark set ups, but, more importantly, I wanted it to represent Monica’s transformation after “fear” had been introduced to her character.”

This visual representation of one’s own perception of fear or anxiety is also present in the way that, despite the use of natural elements like a dead tree and falling snow, the entire video was shot on set. Blackley elaborates on this choice: “I wanted to shoot everything on set with the aim of making it all feel fake, like it was a dream or an insecurity created within someone’s mind. Inside my head, I’m capable of running away with worries, pre-conceived notions and fears and often create these extreme representations of them.” 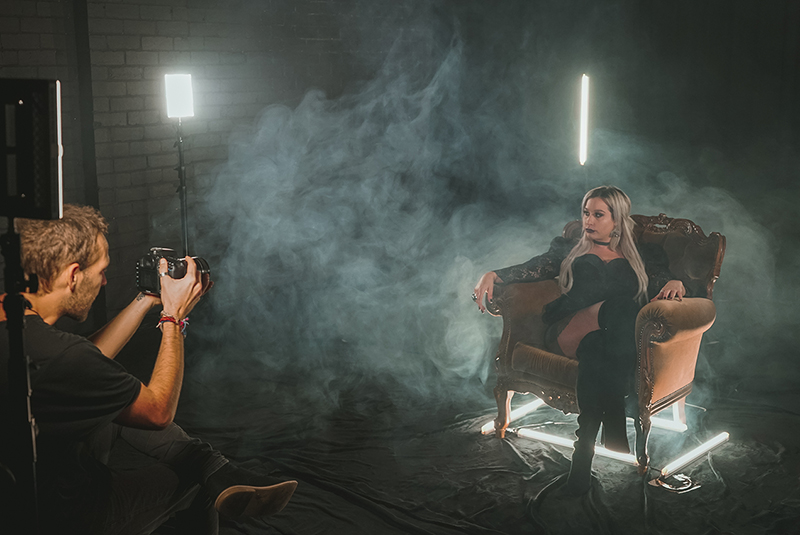 He continues: “And beyond that, it was simply a time issue! We had DCF Studios booked for an 8-hour day and there were around a dozen scenes to shoot. I was flying in and out of Melbourne just for this shoot, so my plan was to set up camp in one place and make everything happen there. The guys at DCF have a truly amazing space, with access to absolutely everything you could imagine. I booked everything in house; the lighting, the practical stuff and a lot of the set design. It was such a great space to work with.”

Blackley seems almost surprised at how well the execution of the brief came together, considering the extensive undertaking that was necessary. In closing, he was determined to sing the praises of those involved and give credit where credit is due. “We had a massive amount of content to cover and a strict shooting schedule to stick to but we did it! It was a great example of everyone coming together to create something. The teamwork and dedication on set was next level and I can’t thank everyone enough!.”

Here is the official video for “Fear”