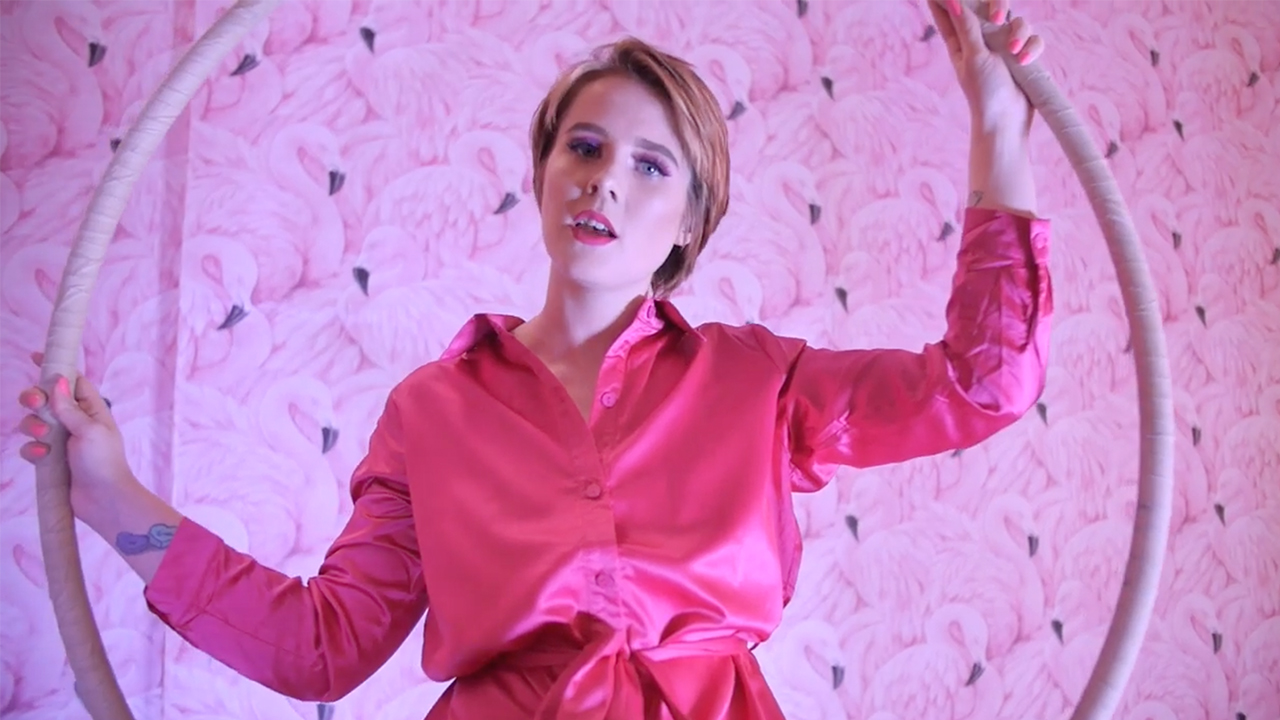 [dropcaps type=’normal’ font_size=’60’ color=’#ed145b’ background_color=” border_color=”]T[/dropcaps]here are few words that entirely encapsulate a feeling the way the word ‘Prosecco’ does. It’s sparkly, bubbly and maybe a little messy, but in a fun way. As Rachel Maria Cox perfectly puts it, it’s “A little bit fizzy, a whole lot sweet”. Not only does this capture the concept of RMC’s latest track, it also works as a fantastic metaphor for the direction their music has been heading in. The funky sugary pop influence that has gradually trickled in, while still maintaining the crisp honesty and self-awareness for which RMC has become so recognised.

When conceptualising the video for ‘Prosecco’, RMC had a very clear objective: “Since Prosecco is a twist on the classic ‘love drunk’ love song, I wanted to take the classic pop music video and put a queer twist on that. I wanted to work with amazing female & LGBT performers to make a clip that subverted the male gaze – something that was sexy and fun but was equally empowering.”

“I was really lucky to get to shoot at Sky Sirens, a Pole Dancing, Aerials and Burlesque studio in Sydney. I love everything about this place, from the decor and the uniqueness of each of the rooms, to the way they have built an inclusive and welcoming environment for all their students. I was also really lucky to work with two of their teachers, Dahlia and Ginger, who are incredible performers and really brought the playfulness of the song to life.” 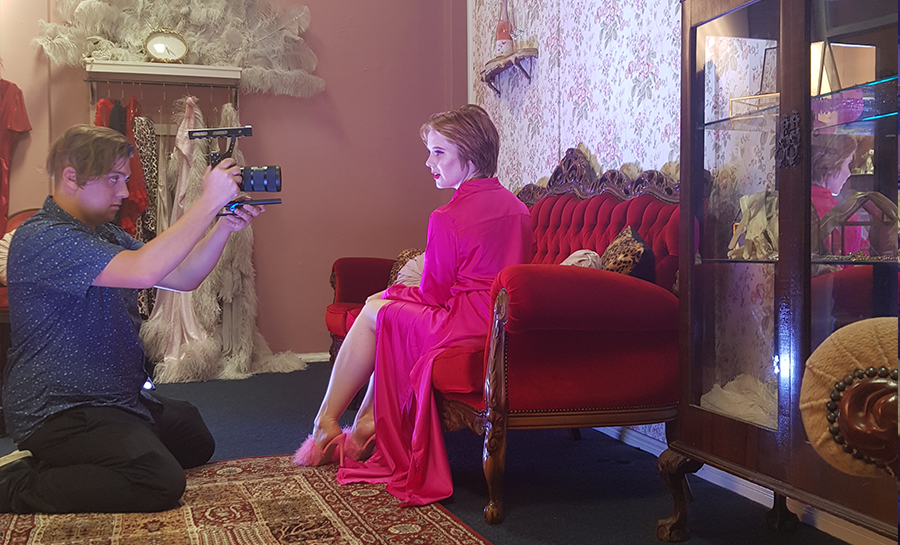 Enter director Joshua Barnett, the Newcastle based cinematographer, photographer and musician who was tasked with bringing RMC’s vision to life. Barnett tells: “RMC knew from the get go knew what they wanted, so one of the main ideas we wanted to get across was to present these amazing performers doing their craft but in a non-overtly sexual manner, which seems to be the go-to method in the mainstream pop scene. Dahlia and Ginger had this inner confidence which didn’t need any approval from a (usually male) sexual gaze and I feel like we really highlighted that within the clip. The same idea being with RMC that although they were wearing what you could call a ‘sexy outfit’, it was more an expression of their identity as an individual without having any overtly sexual connotations to the material itself.” 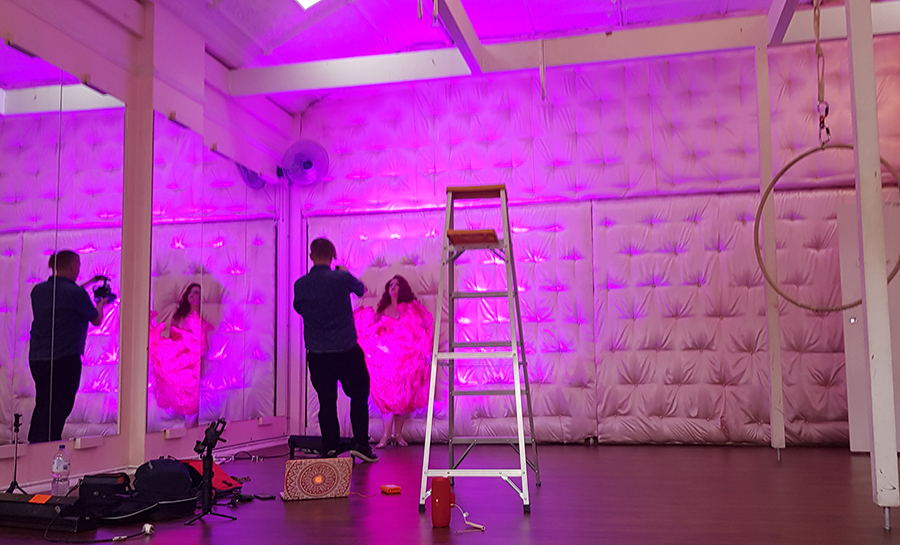 ‘Prosecco’ is a montage of Rachel Maria Cox with Dahlia and Ginger from Sky Sirens, confidently performing around the studio in a glorious bubblegum flamingo lipstick pink haze. As Rachel Maria Cox describes: “The biggest thing I wanted was Pink everywhere! I wanted the shoot to be a bit like a Barbie Dream House, slightly surreal and over the top. I really love playing with the idea of femininity coming from a non-binary identity, so I wanted to make something that was feminine but subverted the idea of what an ideal feminine woman should be or look like.”

Barnett elaborates: “We really wanted a 2000’s myspace era aesthetic with the shoot, so typical neon lights and bright dramatic colours really emphasised that aspect of the video, despite the lyrical content not referencing the concept. RMC’s choice of location was a perfect choice for the loud and bright feel of the video as we did not have to do much colour correction as it was already so prevalent in the location.”

This pink aesthetic is pushed right to the precipice of being saccharine, which encourages the pop side of what RMC does and in turn allows the lyrics of the song to be extremely prevalent by highlighting the contrast between the honesty of the words and the fantasy of the aesthetic.

Joshua Barnett utilises a dynamic moving handheld camera that swoops and pulls with the movements of the song, and, particularly in the bridge, introduces these focus pull transitions that feel so at home in this extreme pop habitat. Barnett explains: “My thought process filming the performance was the kind of aesthetic that you would see from a home-made iMovie video, handheld phone camera, sweeping transitions and blurry cuts to accentuate that kind of feeling. The original cut of the video was much more dramatic in these elements but RMC decided to tone down that side in order to highlight the performances of Dahlia, Ginger and RMC.” 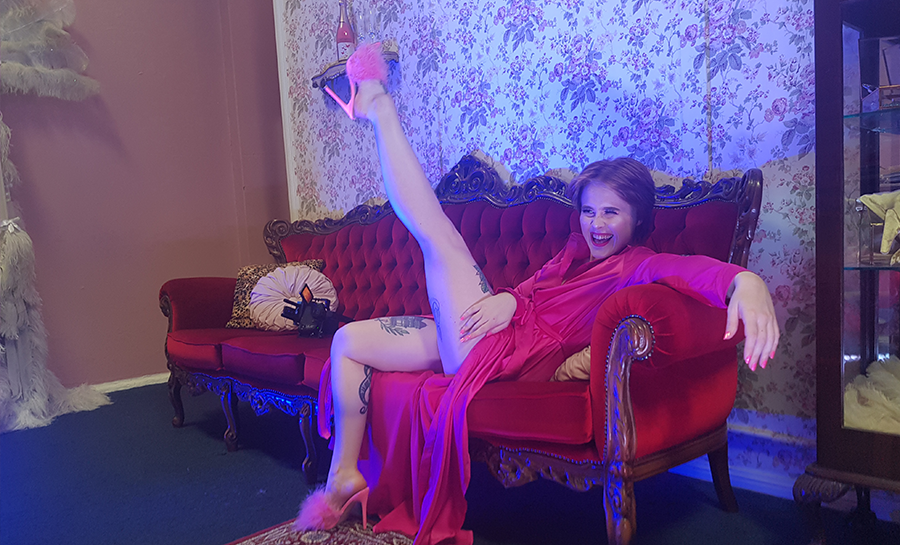 RMC’s forthrightness as a performer is extremely infectious both on the record and in a live setting, and Barnett’s choice to shoot both them and the two Sky Sirens performers in tight, bold and almost heroic shots ensures that this facet of Rachel Maria Cox as a performer is well and truly fulfilled in the video as well.

Here is the official video for “Prosecco”