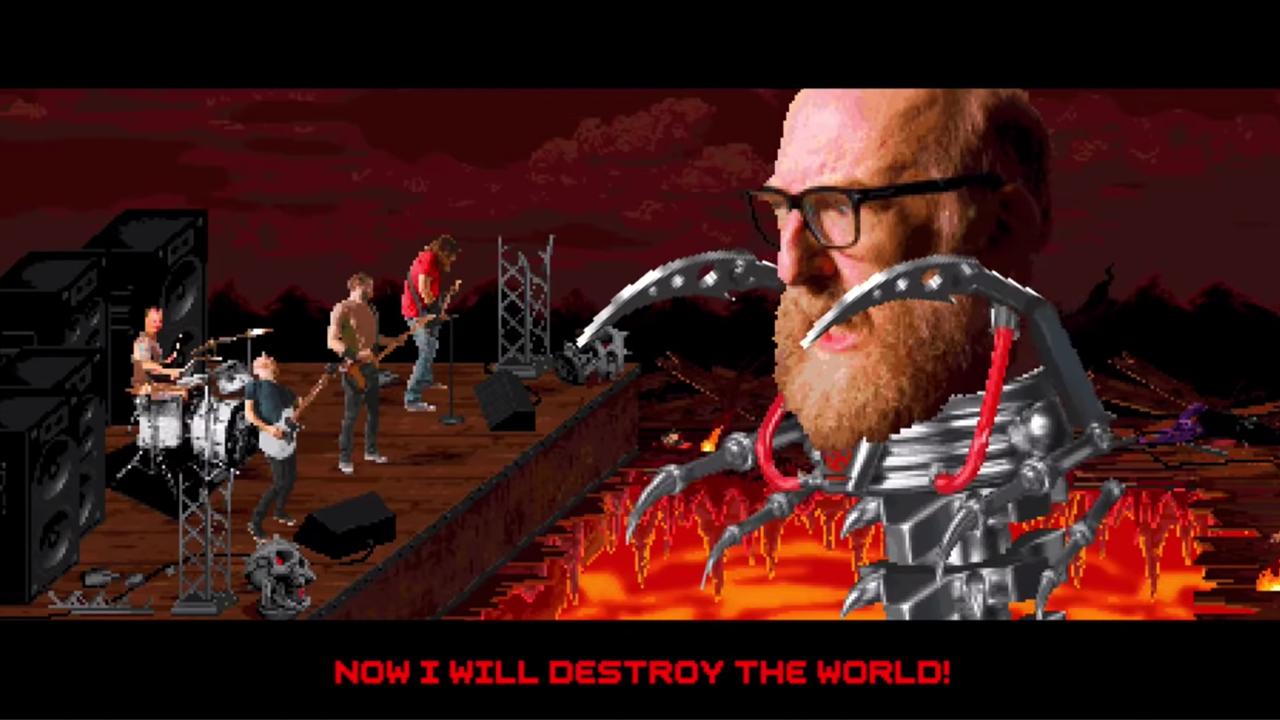 [dropcaps type=’normal’ font_size=’60’ color=’#ed145b’ background_color=” border_color=”]F[/dropcaps]ew remember the great war of the early ‘90s where young men and women fought on the streets in mortal combat and an overweight Italian plumber took psychedelics and kicked turtles. This was the 4th generation console war where Sega versed Nintendo, Capcom versed Midway and a hedgehog versed a gorilla named Donkey. Re-enacting the 16-bit battles of the past, Ansel Wallenfang rapped to CLIPPED.TV about his latest retrospective creation, Red Fang’s ‘Antidote’.

“Capturing the early-mid ‘90s arcade era as closely and authentically as possible was really important to me. Luckily, I had an amazing, ever-evolving team of designers, artists, and editors that really helped me pull it off. It drives me crazy when people take obvious shortcuts and do stuff like throw a crappy pixel filter over everything. It’s like they’re saying, “Hey guys, remember video games!?” and it feels like a cheap nostalgia grab to me.”

Wallenfang continues: “This particular 16-bit aesthetic seems to be really overlooked, especially by modern pixel artists and animators, so either way it felt like an original way to make a music video. And to my knowledge it’s never been done before. There’s also a certain grit and DIY vibe to this style so it felt perfect for a band like Red Fang. When I pitched them the idea, they were on board almost immediately.”

More than just a stylisation or cheap aesthetics ‘Antidote’ offers a true representation of the art style of the period. From the opening soundtrack through to the shuddering animated transitions between clips, the viewer is taken on a journey back to the arcade gaming era. Wallenfang describes his process and how he resurrected some of the original techniques used back in the day:

“I’m a huge nerd for process, so it was really fun to do a deep dive into all the various limitations and technological handcuffs of the era, and then find ways to recreate them. We even hand-selected a 256-color palette, because 257 would’ve been bullshit!” 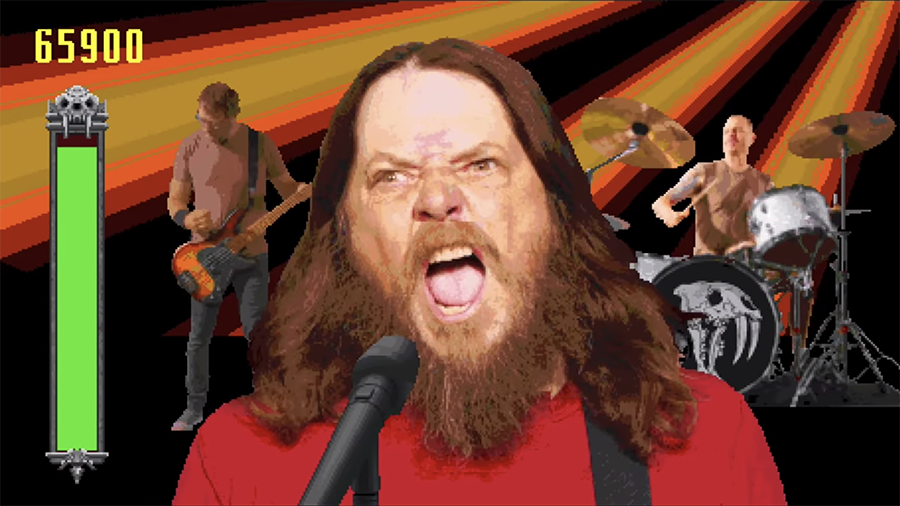 “Creating most of the final assets was through a process called digitization, which is how they captured that “real” vibe in games like Terminator II, NBA Jam, Mortal Kombat, etc. There are definitely some shortcuts we were able to take with modern programs, but ultimately the process was really close to how they did it back in the day.”

“When it comes to animation, unless you have endless funding and love wasting months of time, there’s no winging it or going back to make changes. So I first had to write out the entire story – with all the jokes, actions, and endings – storyboard it (with Leo Zarosinski), and then make a boardomatic (with editor Eric Hill) to block out all the big beats and transitions.”

“I first filmed Red Fang and all of my actors against a green screen. That footage was then reduced in quality and frames, and then finished with hand-drawn touches by my amazing friend/collaborator/animator, Andy Gregg. After all that we had our digitized sprites which were plugged into the video, one by one until it was completed. And since every individual performance first needed to be comped together before going down the pipeline, it was a Herculean effort by my team of four editors, who I’m pretty sure I owe drinks for the next decade.”

“For other assets, I reached out to one of my favorite artists, Skinner, to see if he would be down to contribute a monster design or two. He loved the concept and designed some elements in the intro – like the interdimensional monster and repgoyle – and even made a couple of masks for my actors to wear. (He might’ve left out breathing holes for our mutual friend, Shaine, who wore it. But I’d like to think it just added to his performance.)”

“Skinner also introduced me to his pal Ryan Matlock, aka Rad Biker, who has a really unique style. He designed a bunch of awesome masks that were integrated throughout. For the splash art/loading screen at the very beginning, I wanted it to feel like PC box art that was sitting on a shelf right next to Doom and Wolfenstein; it was designed and painted by the incomparable Smelly Elle. So, in the end, I’d like to think the sum of all these parts is more than just homage, and that we’ve contributed something new to the genre.”

As the story reaches its climax the band becomes “too metal” triggering an epic final boss fight with the comedian and demon from the metal underworld Brian Posehn. Ansel explains how Brian Posehn became involved, along with the other talent that collaborated on the project:

“This really was a dream project. Throughout the whole process I was pretty selfishly like, “Who do I want to work with?” So, I just started reaching out to people like Brian Posehn and Matt Pike, and I guess the idea was strong enough for almost everyone to say, “Hell yes!” Disasterpeace (Fez, It Follows) even composed all of the intro, outro, and credit music.” 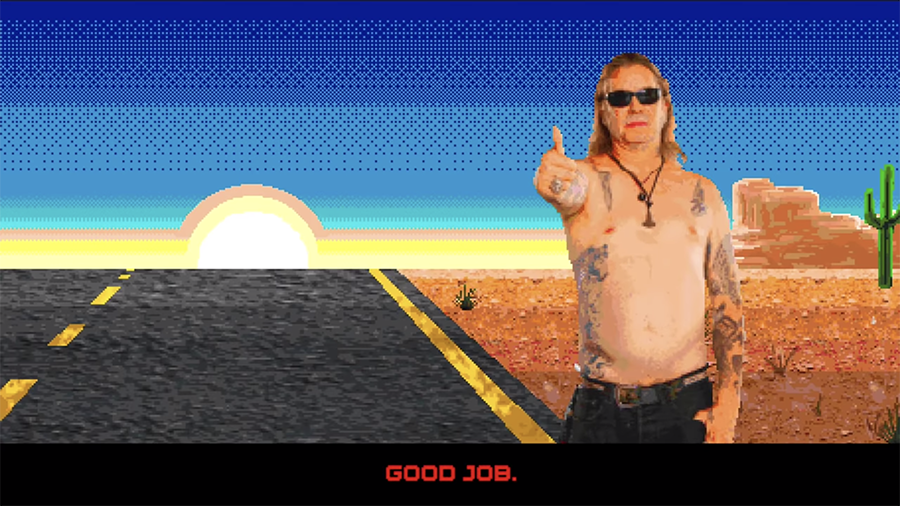 “The one that got away was Reba McIntyre. I almost got her to make a big WTF? cameo at the end. She would’ve appeared like the princess in the castle and said, “Thank you for saving me Red Fang. If you ever need me… don’t.” – and then fade away into the clouds. Too bad, it would’ve blown minds!”

Ansel and his team don’t change the world but transform it. For five and half minutes you’re taken back days and nights of blowing on cartridges and up, down, left, right, A, start when things go wrong. Clocked it!

Here is the official video for “Antidote”