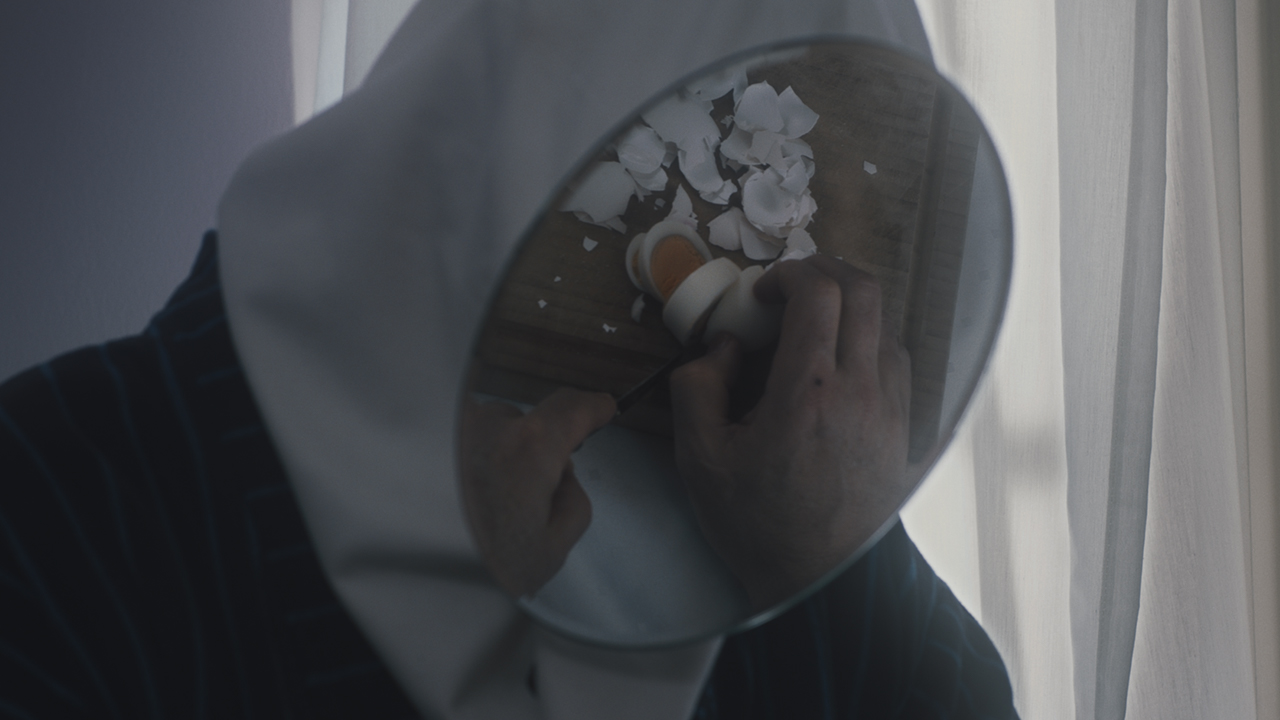 [dropcaps type=’normal’ font_size=’60’ color=’#ed145b’ background_color=” border_color=”]A[/dropcaps] mirror-faced man sits at his kitchen table, menacingly slicing eggs. This may sound like something you’d hammer into your Notes app at 3am after waking from a fever dream, which appears to be pretty much what Australian-born Berlin-based director Eloise Walker was trying to achieve with her new video for German hip-hop duo, Ruhe & Bit.

When hearing “Auge” for the first time, Walker couldn’t deny the inherent unease and off-kilter nature of the song: “I was overcome by a feeling of discomfort – it somehow made me feel like things were playing in slow motion, like I was hypnotised. This hypnosis ended up being a central theme in the video, something we kept coming back to.” 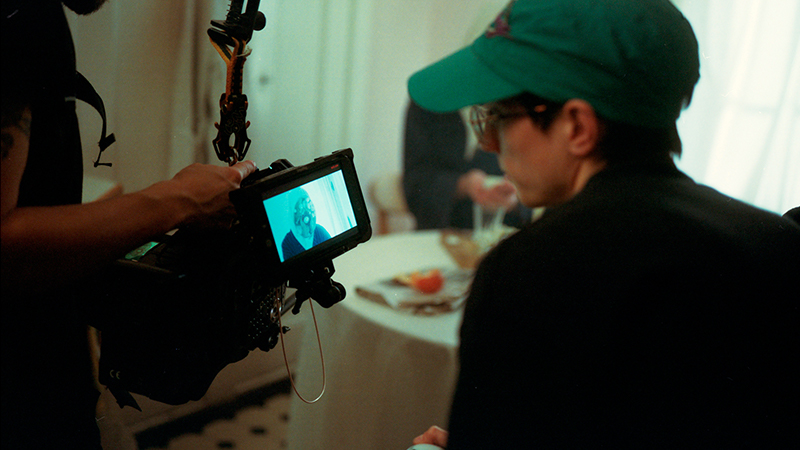 Despite the song’s intricate clicky beats and mysteriously sparse production, Ruhe & Bit had a very different view of the vibe of the song. Walker says: “Funnily, the band had something completely different in mind. For them, this was the up-beat, fun track on their EP. But when I pitched it to them, they were really into it, and liked that I had had such a different experience with their song.”

Walker’s almost visceral experience with the song meant that an approach for the video came quite quickly to her. “The lyrics are really visual, and they play with superstitious allusions and dark imagery. Ruhe’s staccato delivery combined with the rhyming has a certain sorcery to it, it’s almost like he’s reading a spellbook, or a riddle.” 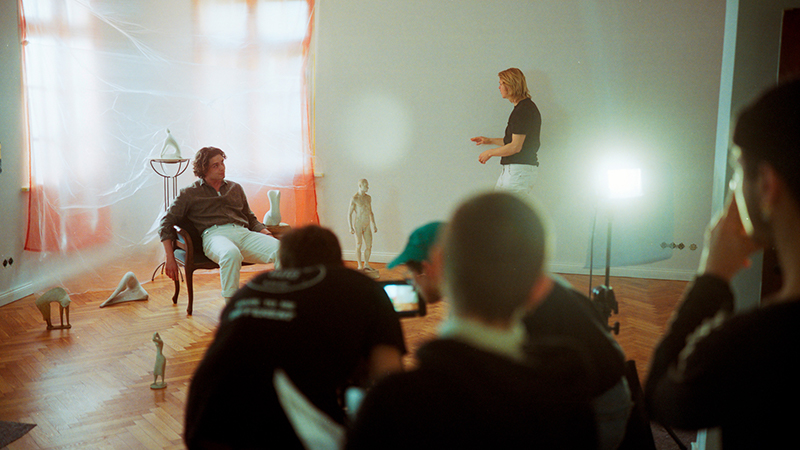 This almost occult-like vibe is ever present in the video and presented in a really original way. Where many would take this vibe to a much more fantastical place of demons, witches, altars and pentagrams, Walker instead chooses to anchor this dark fantasy in reality by setting the video in a house, then drip feeds in the surrealism from there.

Walker talks about the process: “The surreal images kind of naturally built on each-other. The mirror man was the central image, and I had this idea that he would be reflecting his light around the room. I was playing with the idea that his light had a sinister power, and it hypnotises the rappers when they make eye contact with it.” 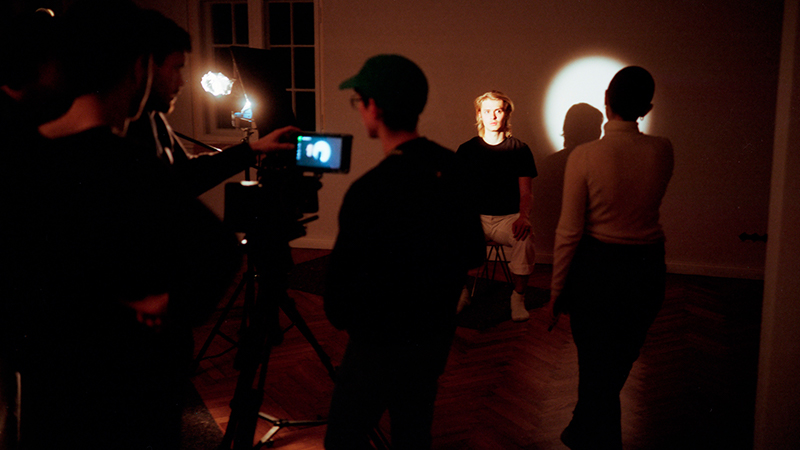 This leads into one of the more subtle pieces of surreal imagery in the video, the way Ruhe & Bit’s irises constantly undulate and fluctuate in size. It is an incredibly effective mechanism in its understatement, the viewer can definitely sense that something isn’t right but may not be able to put their finger on exactly what.

Walker muses: “It was a silly idea that we almost dismissed, but I’m glad we kept it in, because it worked really well. It also helped Ruhe & Bit with their hypnotic performance. That added piece of costume really changed their energy, and it was cool to watch. Top tip: invest in your contacts. We got the cheapest we could find and so ours kept falling out and one of them even ripped. Points to the people who notice the iris size continuity.” 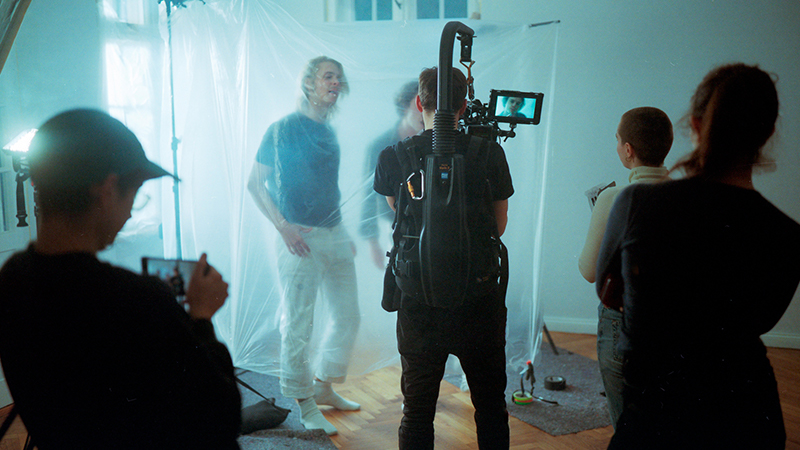 While the mirror-faced man is certainly the centrepiece of the video, the way the performers Ruhe & Bit are presented is both interesting and extremely refreshing. Where a more archetypal hip-hop video manner of shooting would’ve certainly sufficed, Walker gives the rappers to the viewer as these intense unsettling mystics, draped in a haze of light and enigma.

Walker tells of how they achieved this feeling: “My DOP Saskian Schubert had got me super excited about using this thing called a Lensbaby, which is what gave that setup it’s kind-of-in-focus-kind-of-not effect. We wanted it to feel like the image was being pulled and stretched at the edges, that the tension was causing the image to rip. The tightness of the shots helped add to this tension and also really draws attention to their pupils and the intensity of their eye contact with the lens, Ruhe’s (lyricist) performance is hypnotising, and we wanted to highlight that.” 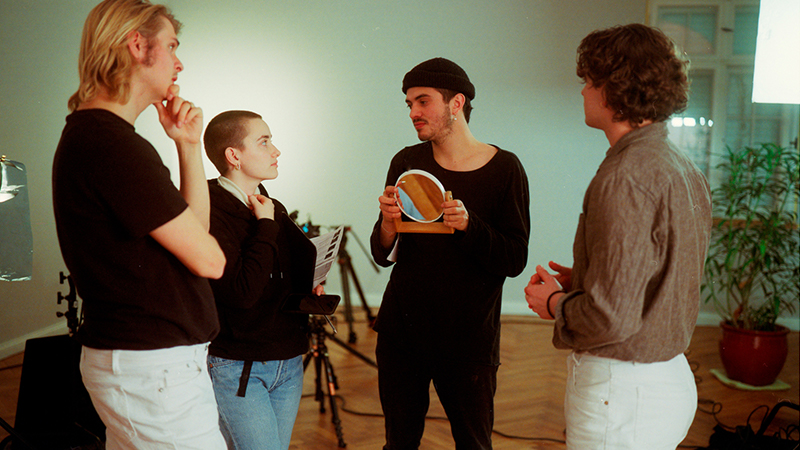 The video concludes with the reveal of the man beneath the mirror, stripping away the surreal edifice and presenting him simply as he is, a man alone in his kitchen. This closure was important to Walker, both as an ending to the circle but also in bringing further questions to the piece.

Walker continues: “The tone is commanding, and I liked the idea of ‘the mirror man’ delivering these lines. It feels like he’s either had everyone under his control or that he is under the control of somebody or something else. There’s also something simultaneously satisfying and disappointing about revealing his face. It strips him of his mysticism and brings him back to a human level.” 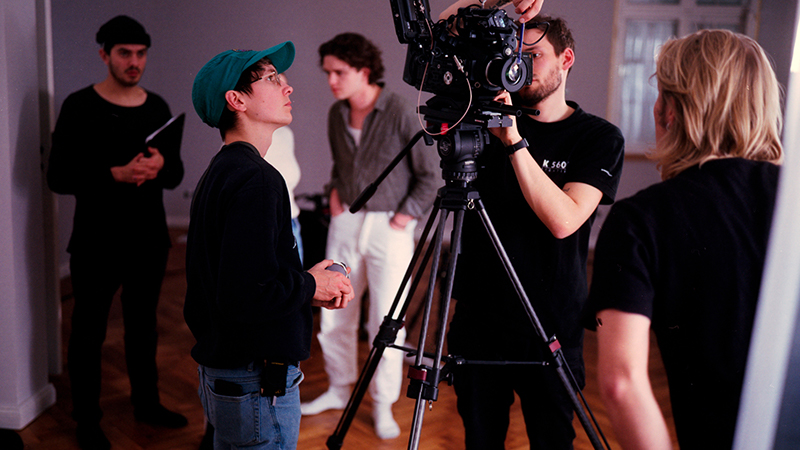 Walker speaks extremely fondly of the way everything fell into place throughout the shoot: “There were multiple magic moments where the crew found common references before speaking about it – I walked into a session with my colourist Nadia Gomez and she was looking at stills from ‘A Ghost Story’, which was my main character reference for Bruce Woolley who played our ‘mirror man’, as well as 16th century Vanitas art as lighting references for the ‘still life’ shots, which were also a reference of mine. I hadn’t mentioned either of these to her, but it was something she was able to organically intuit from watching the final cut.

Walker continues: “We were working with an international crew, and not everybody spoke German. There is a shot in the video where the mirror man opens his hands to reveal a slice of an egg with the yolk missing. The line that plays during that shot is “ich sehe nichts im leeren Blick” which roughly translates to “I see nothing in this empty look”. Our editor Aaron Lucas doesn’t speak German but somehow chose a shot that perfectly spoke to the lyrics. I think it speaks a lot to the creatives on my team that they were able to naturally intuit so much before briefing. It was like the hypnotic spirit of the song somehow infected our crew’s subconscious and led them to some great creative choices. At least I like to think it has a mind of its own.” 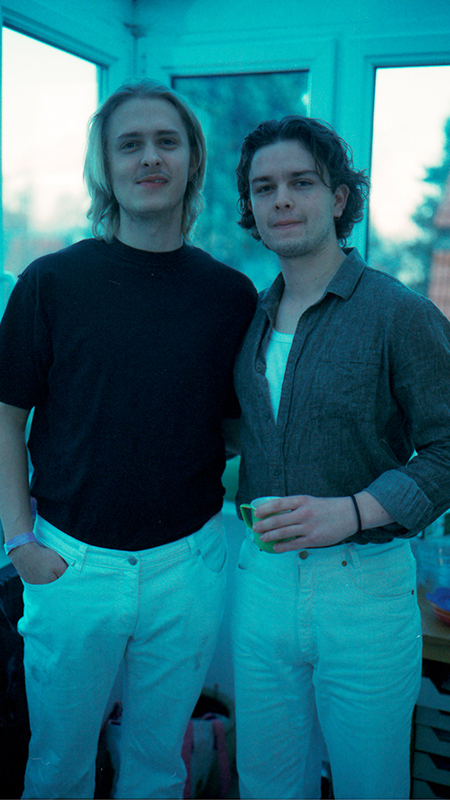 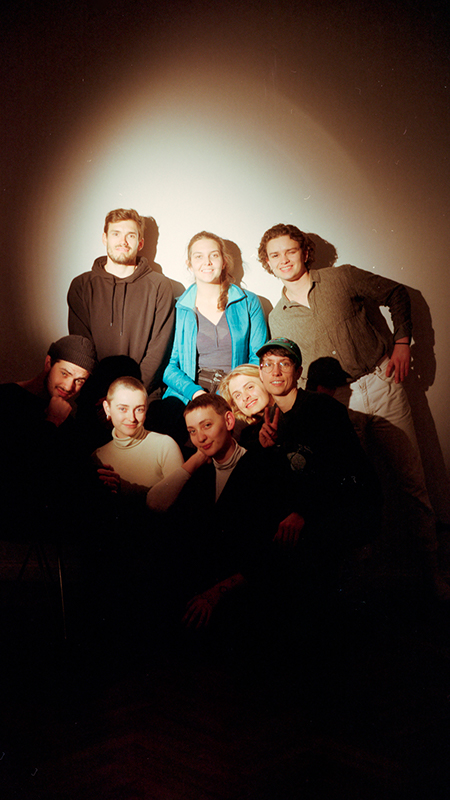 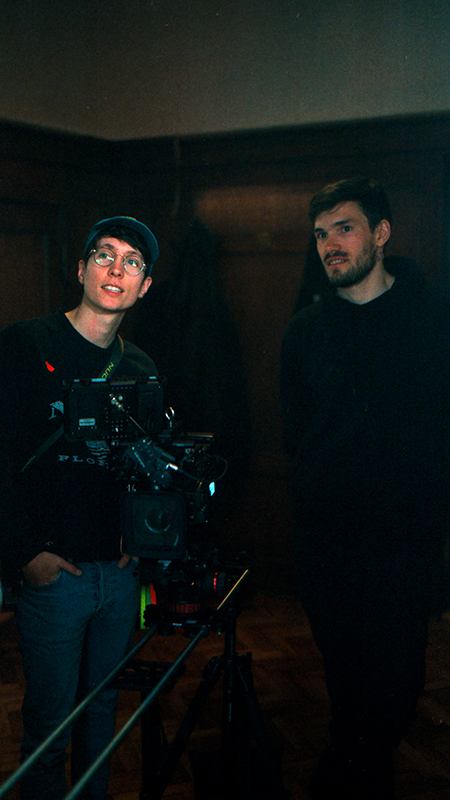 While there definitely does seem to be some mystical power at work in bringing some of this video together, a great deal of the success does need to be attributed to Eloise Walker’s certainty of what she wanted to achieve, and the vision and resourcefulness required to achieve it. There is something really absorbingly twisted about this peculiar exhibition.

In Walker’s own words: “This video is all about tensions, and there are two opposing kinds at play; one where it’s all up in your grill, super close, directed at you, for you. The other kind of tension happens when the stillness and emptiness of the wide, long takes clash with the pacing and aggression in the track. The stillness in particular was something that we were set on from the beginning. We really didn’t want it to have that typical hip-hop edit, we wanted it to live in this off-beat, slow paced world of emptiness.”

Here is the official video for “Auge“