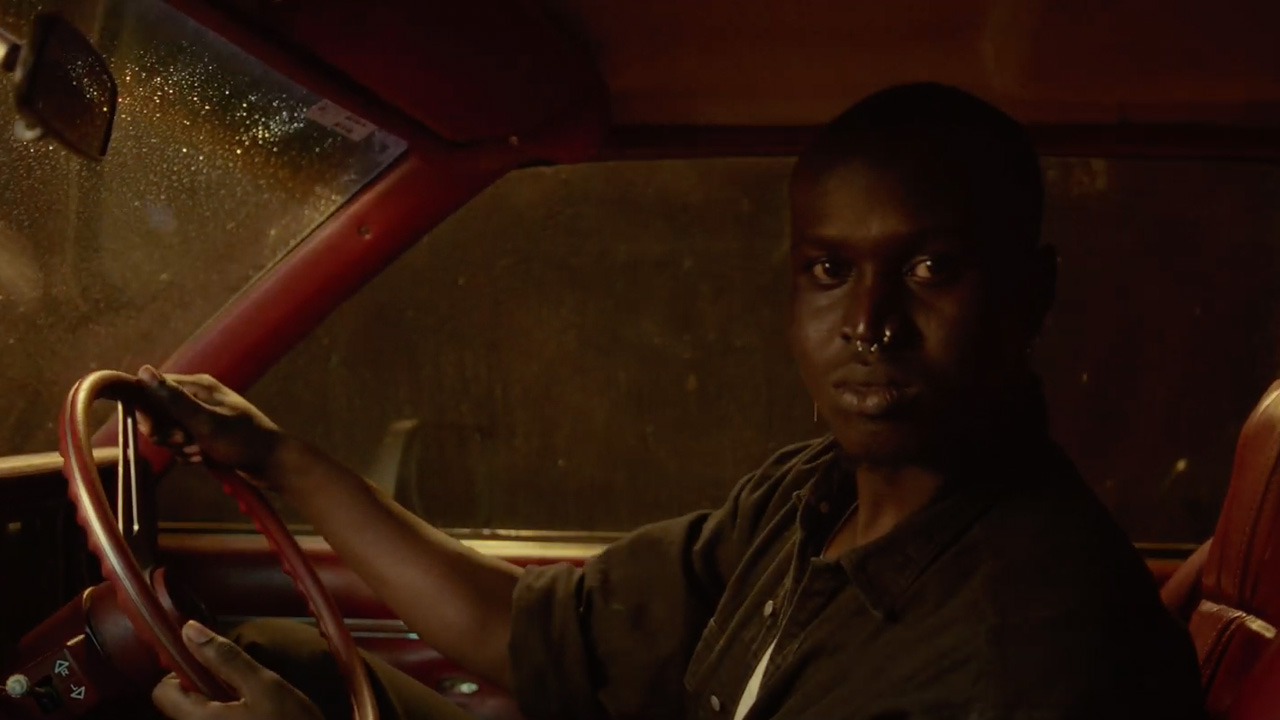 Jesse Leaman’s clip for Sam Phay’s ‘After Life’ opens to a beautiful rain-soaked car, clad in red leather, almost floating as it bounces along with the understated beat of the song. After Life is subtle but arranged beautifully, so beautifully in fact that it’s easy for the darker vibes of the song to sound almost soothing. The accompanying visuals are similarly smooth, a mostly static camera blended with powerful movements from the main character within eerie spaces that lend themselves to the mood of the piece. 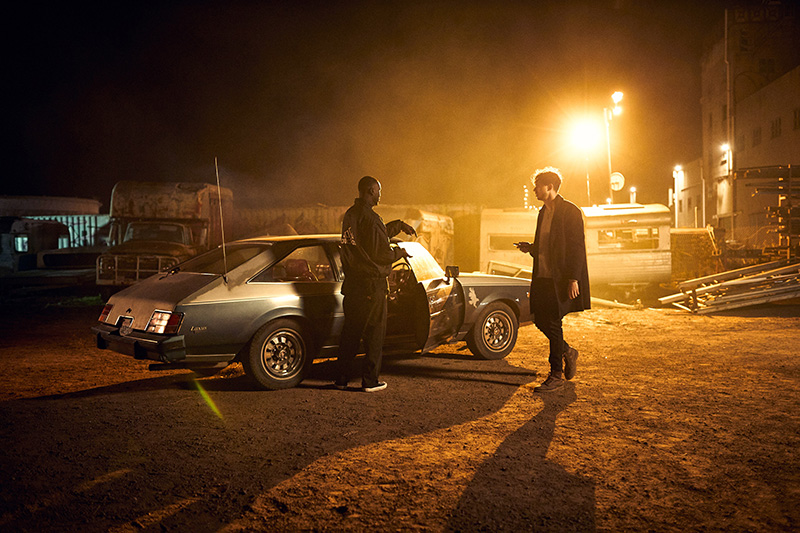 The clip takes place between the car and an abandoned house, unlit and empty, with colourist Oliwier Gesla leaning into nostalgic warm sepia tones. The barren spaces allowing a character, played by Wada Alexander Kuan, to express freely with movements that push and pull against themselves, creating and tearing down their own barriers. The locations aid the themes of the piece, initially trapped within the car, and even when they break free they are stuck looking back at their past self. With limited space to work with in the confines of the car, Leaman had to make sure they made the most of the movements, ending up with something subtle but direct. Leaman describes:

“When choreographing movements with Wada our dancer, we had to be mindful of the space within the car and give each area its own characteristics. I wanted to allow as much freedom for him to move, but we did restrict it to the front of the car. Before the shoot date, Sam, Wada and I got together for a choreography session. Now, I am no choreographer, let alone a dancer, but Sam and I sat in the back of my Ford Fairmont, Wada in front, and we explored these movements. This motif of the fingers was discovered at that moment.” 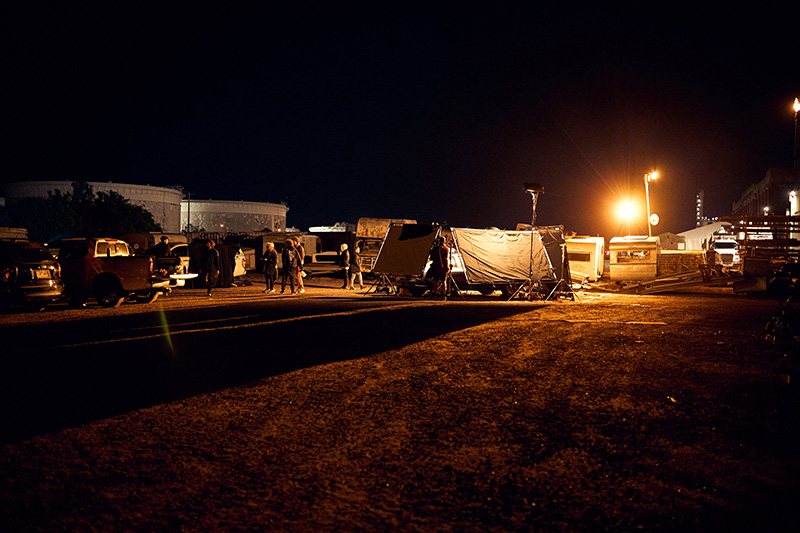 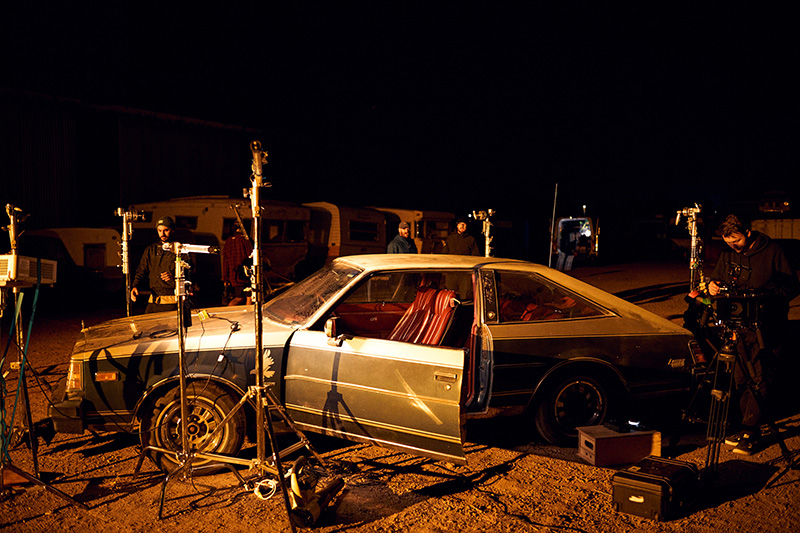 It’s the second collaboration between Leaman, Wada and Phay after their breathtaking and mournful clip for Skin. The setting of the car keeps Kuan trapped but as the clip progresses he is thrown into a derelict and abandoned house. He slips further and further, the fear builds, Kuan is visibly shaken but continues to move.

“During the panic of pre-production, I knew we would be in the car for the first half, but I needed something to represent our protagonist being thrown deeper and deeper into an almost nightmare state. I needed to close him into a more haunting space. The car was a happy discovery, I found it on location when I scouted, it belonged alongside many vintage cars to the owner of the property. But the reds and leather were perfect for allowing contrast and movement.” 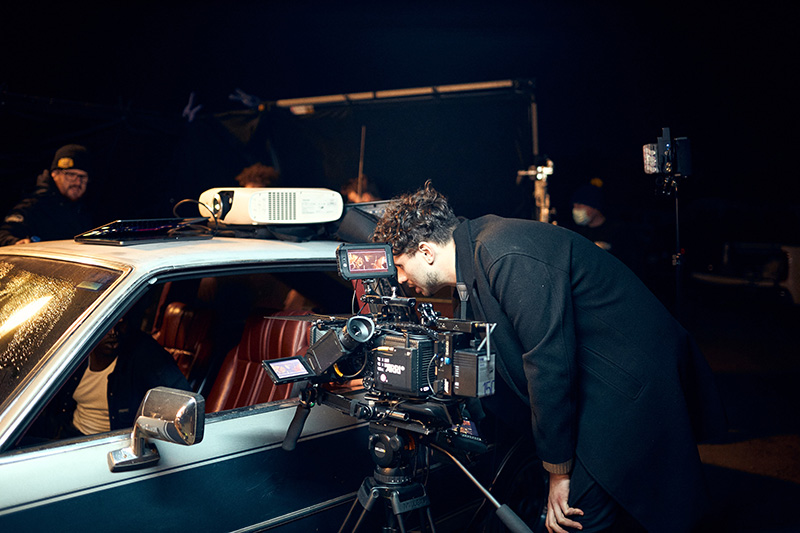 The haunting space was achieved with the abandoned house later in the clip, the bare and sparse corners covered by fluid shadows created by passing lights. Despite the foreboding nature of the damaged and peeling walls, and the pervasive darkness in the building, Kuan still moves with abandon, limbs free to strike out into the spaces. Wada for a moment sees himself almost looping, following the same path of self-destruction. We often know we are making the wrong decisions in life, sometimes we stare ourselves in the eye and continue to do so regardless of the knowledge. It’s a wonderfully strange human behavior. 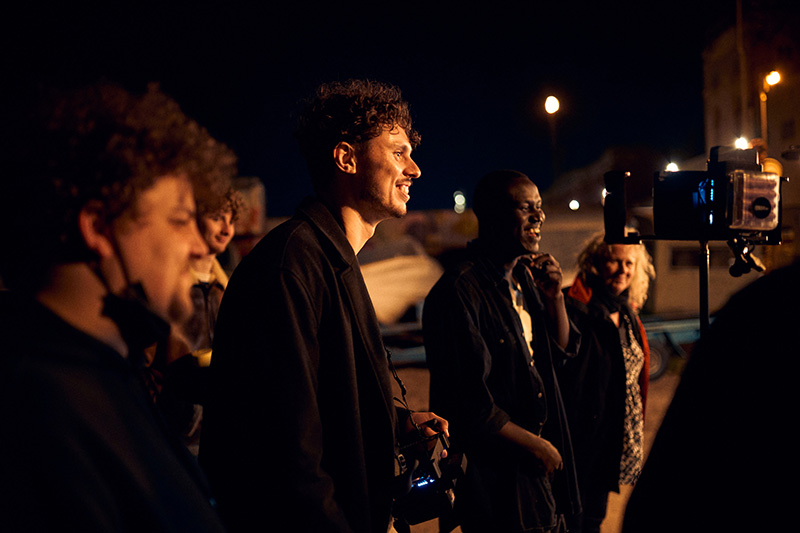 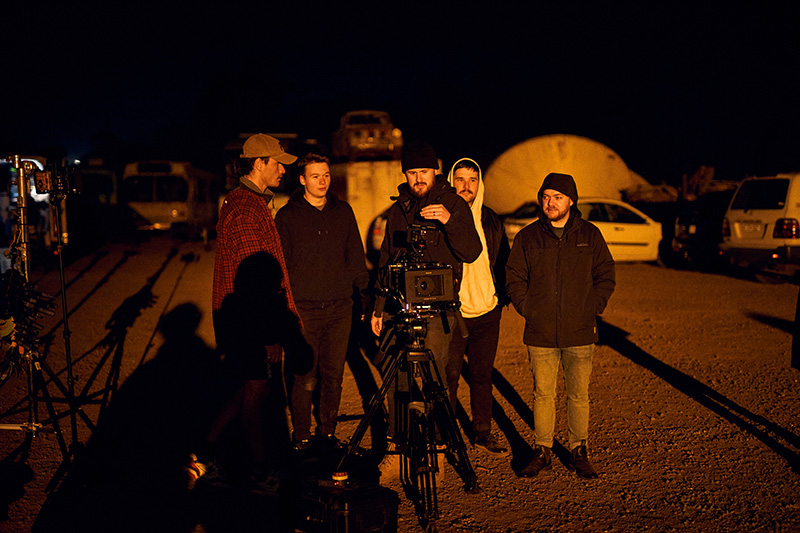 The clip is focused on movements, with dancer Kuan given the freedom to delve into ideas of separation from self and being haunted by past decisions. The clip’s undertones of loss and grief are evident in Kuan’s expressive dancing. Though originally limited by the space that the car allows, in the more expansive area of the house Kuan’s movements exaggerate and grow, pulsing with the peak of the song. With Jesse also serving as editor for the project, the pacing is restrained, holding on a shot until Wada’s movements fully complete before cutting to the next.

“With After Life, I wanted to create a metaphorical space that Wada and I could explore with movement. The car represents a vessel to avoid and run away from our deepest fears. His movement haunts him and forces him to look where he does not want. The movement and choreography was a collaboration between Sam, Wada and myself. I would give Wada small vocal cues and a tinkling of an idea, I want you to pulse or something I’d say, don’t be afraid to repeat a movement and get more and more frustrated in this space which allowed him to feel free to explore and discover. Once we found out perfect movements, we locked them in and perfected with the camera rolling. And I am a fan of letting things happen within the frame, I did not want to compensate with too much camera movement etc.” 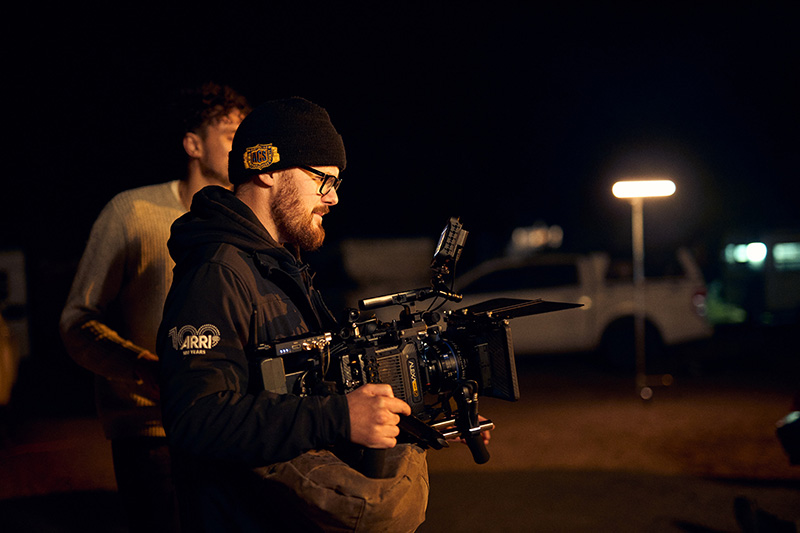 Leaman chose the ARRI ALEXA Mini LF, a large format camera in a smaller body, combined with a Zeiss Cp3 Glass, the cinema quality footage allowing the audience to see Wada and feel the performance in perfect detail.

“The full frame allowed us to get in close with Wada and still see the space. There was a lot of trickery with projectors and spinning lights all wonderfully crafted by DOP Carl Allison and Gaffer Sean Mcglynn. We were not spoilt for budget, this was a collaboration and a passion project, so whatever I could have I was happy to accept.” 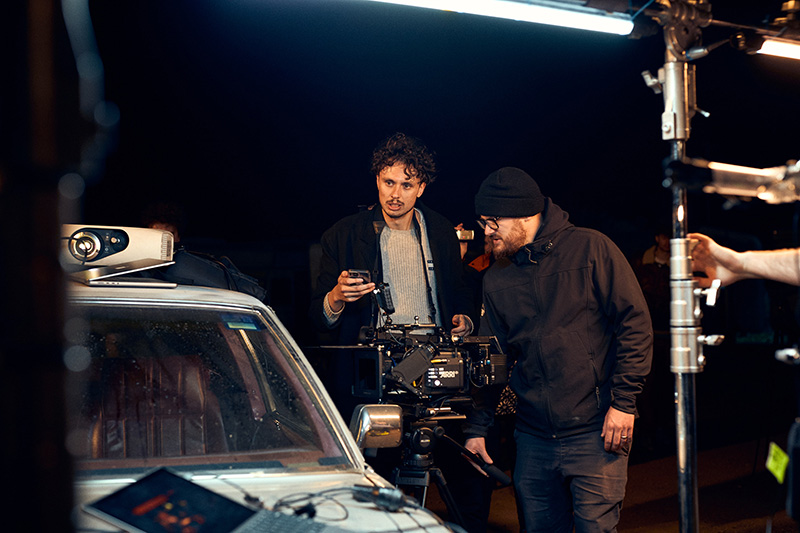 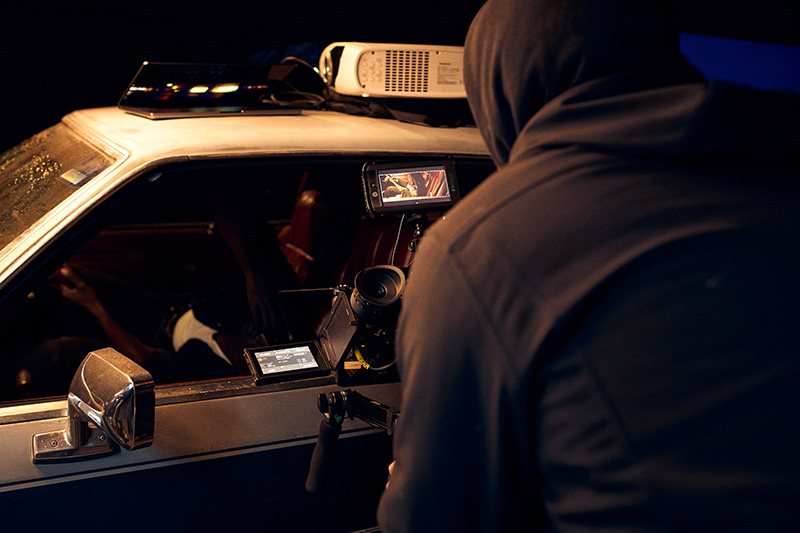 DoP Carl added more about the lighting sequences in the clip:

“The lights were put on tracks to mimic passing car lights, the best boy was given a split monitor to watch the performance so they could better time the movements.”

After Life is an expression more than anything else, an atmospheric look at being haunted by one’s past. Unable to move on, fixated on and rooted by loss and grief. Space and movement play an important role in the storytelling, the expanse of dancing tailored to the available space. Leaman and Phay have created a dark and haunted but beautiful clip, and we look forward to seeing more from both creators.

Here is the official video for ‘After Life’