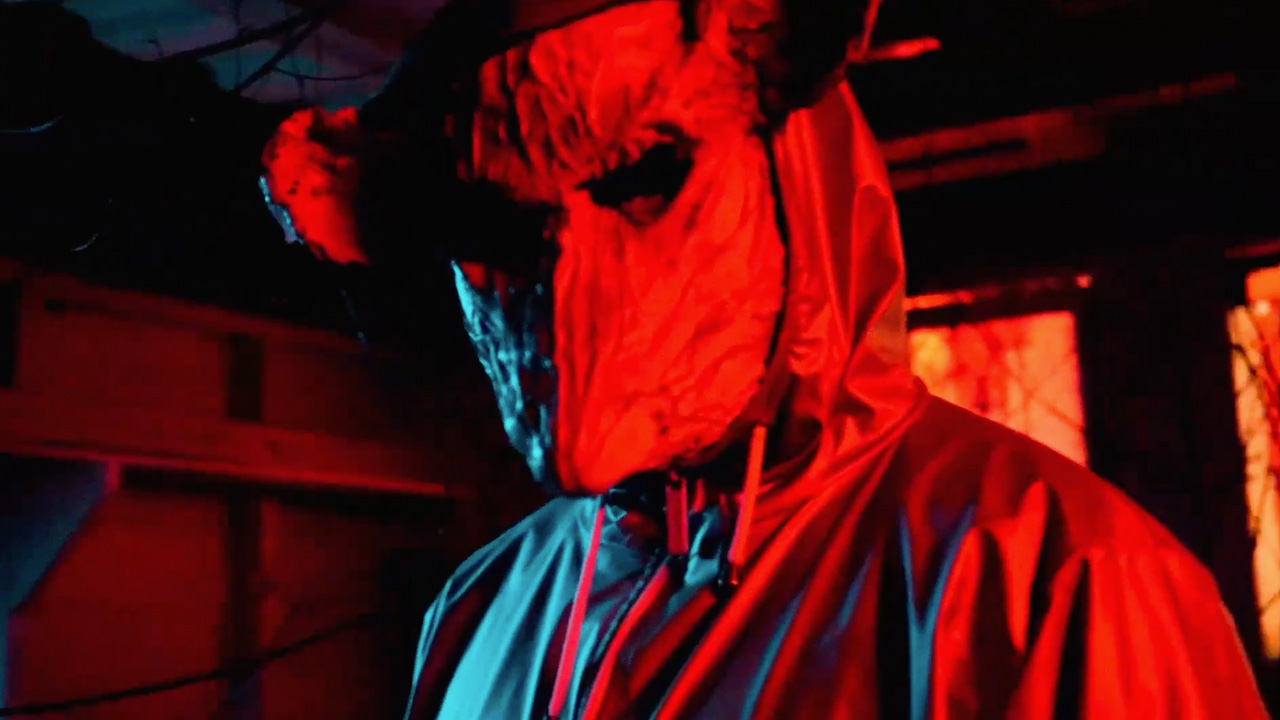 obacco Rat’s latest showing pulses with aggressive energy right out of the gate, air raid sirens blaring to welcome you to the clip for Charred Remains. Rapper Bryte demonstrates a rapid lyrical flow with impressive technique reminiscent of the Aussie greats. Tobacco Rat’s industrial and grungy synth pounds heavy through the track, a violent combination paired with the sharp camera movements and styled lighting. 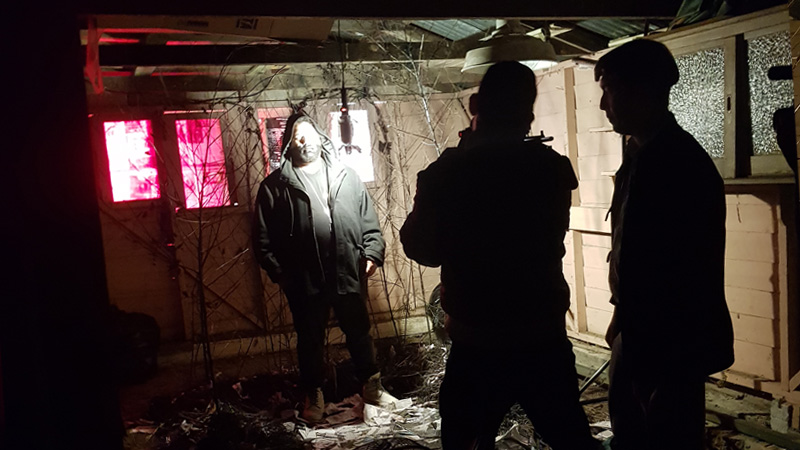 Directed by James Tran, the clip for Charred Remains places the two artists in a dark murky space filled with sharp sticks and refuse, giving the audience only glimpses through blurred shots as shadows dance solid across the lair. The energy is palpable throughout the clip, coming primarily from the pace of the song but also the use of negative and distorted shots. While Bryte takes center stage with his lyrical mastery, the Rat (AKA Jake Steele) is always lurking in the background, drifting around, obscured by barren bushes. The horror space brought forth with warped imagery and the wild movements of the camera give a sense that at any moment it could lose control. James discusses the intention behind the aggressive visuals:

“Beyond specific references, we knew that we were going for unnerving as our primary emotion, and there’s a lot of unconscious cultural imagery to draw upon just from that. You can view the way that Jake and Bryte are placed in the video as analogous to their roles on the song. Bryte’s front-and center with the vocals and the eye-catching makeup, but it’s obviously the Rat’s lair and the Rat’s the one behind the scenes keeping it all together. Jake’s outfit is the same one that he performs in for live shows, and we knew from the start that he’d be wearing it on the night, so it was a good guide for where everything else had to land aesthetically.” 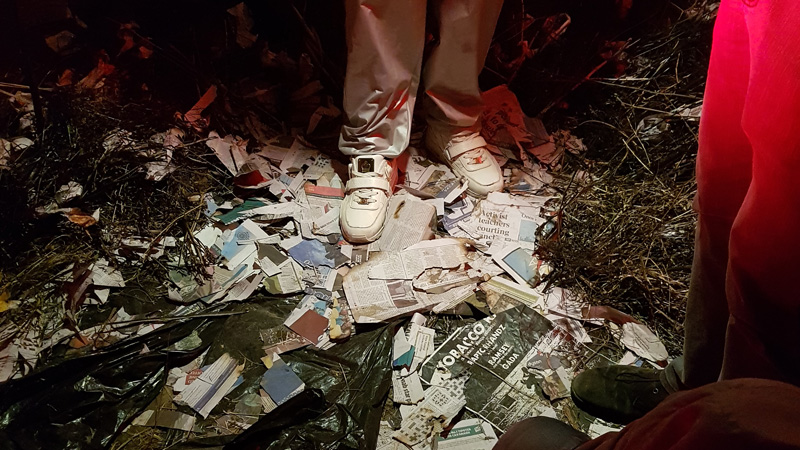 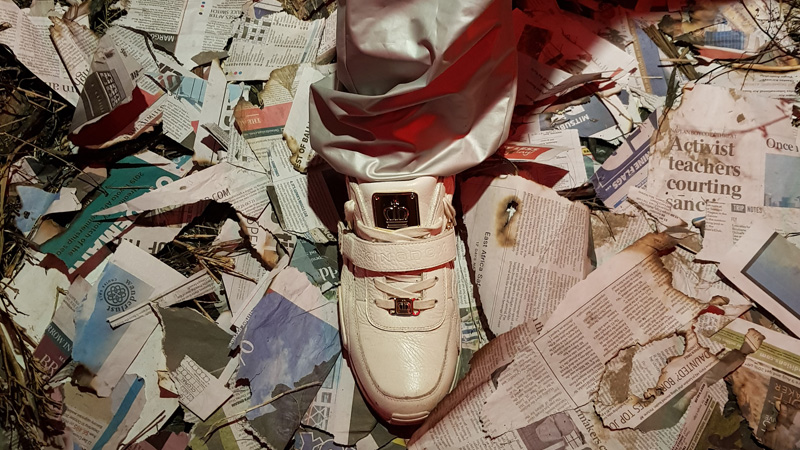 Tran was aware of the limitations of the singular setting and deftly ensured that there was still mystery in the clip and elements that were still exciting throughout.  The halfway point presents a change in colour but also new angles with which to see our dramatic characters, their movements never exaggerated but still striking.

“We had to be careful not to show all our cards in the first minute of the song. The video, structurally, needed to be an escalation of elements otherwise it would get repetitive before it was halfway done, so my plan was to have the viewer peering into the shadows, trying to make out what the shapes they’re seeing are. One shot I love is the reflection of the Rat in Bryte’s dog tags right at the start, that was an improvised shot courtesy of our DoP Adam Marsh.” 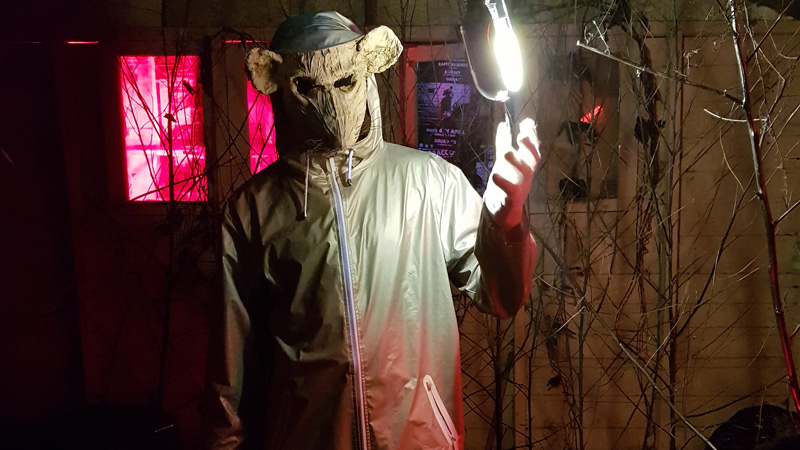 Lighting plays a huge role across the clip, with coloured strobes part of the performance. Tran used a Sony A7S and specialist lighting borrowed from collaborator Alex Bryce. The result in the strobing low-light conditions is that you never really see the whole picture. There are only glimpses of raving in the burning haunt.

“One thing that I didn’t think we’d use much is the blacklight strobe when it’s running at a pretty low speed, and in the edit we found that we could time our cuts to have Jake and Bryte appear and disappear in the same space seamlessly. While the boys were performing I instructed them to give us a good range of movements in different parts of the frame, knowing that our editor/1st AC Noah would be able to find little unplanned moments that cut together well.” 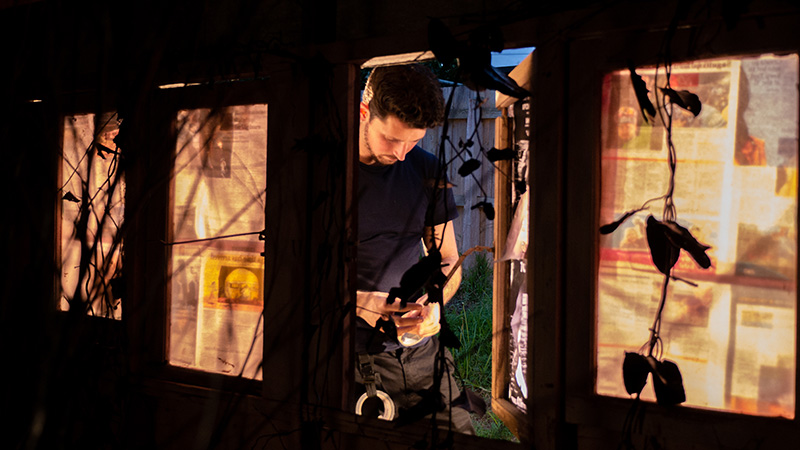 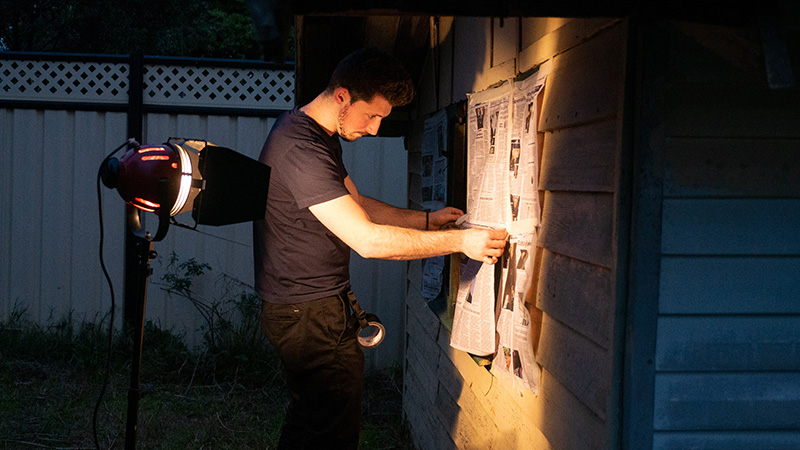 As the track reaches its crescendo, the edit becomes more fragmented to match. Rapid cuts between the two performers in the void-black space accentuated by harsh movements and the primal growl of Bryte’s vocals. The end of the clip is abrupt and breathless, with droning synths playing over a stack of burning Tobacco Rat posters. Despite the clip release on Monday, the production was actually shot in 2019 and delayed by pandemic restrictions. It’s an unusual situation for any artform, and James reflects on the release process:

“There’s a lot of nostalgia for me going back and looking at this clip now after three years. In a lot of ways it feels like a little pre-covid time capsule. One of the best things about smaller shoots like this is you get to really take your time and have fun with it, and it’s a vibe that’s sorely missing in a lot of the film work I’ve done since then.” 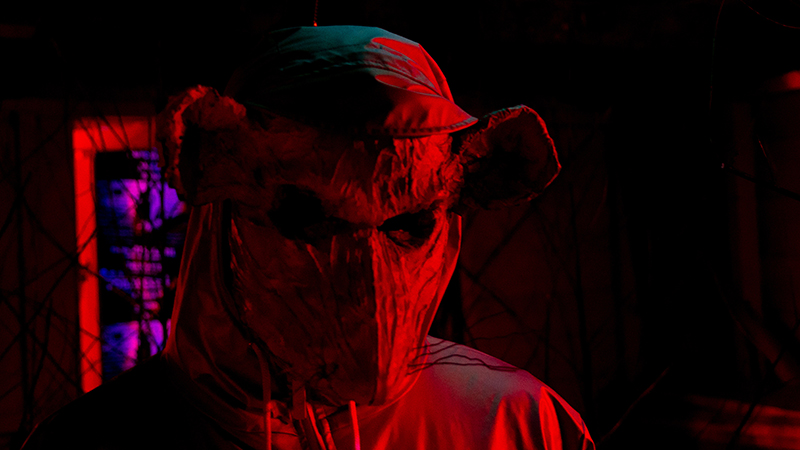 The collaboration between Tobacco Rat, Bryte and James is a hectic horror story, the crushing dark punctuated with strobing lights, each flash giving another glimpse of the overgrown, claustrophobia-inducing lair. An energetic offering in all, the clip hits the targets it aims for, encapsulating that unsettling feeling. The song thumps along with power, the industrial synth over a crashing hip-hop beat with blistering lyrics by Bryte. While Tran often identifies himself as a producer, the accomplishment of his directorial work leaves us hoping he’ll be in the director’s chair again soon.

Here is the official video for ‘Charred Remains’