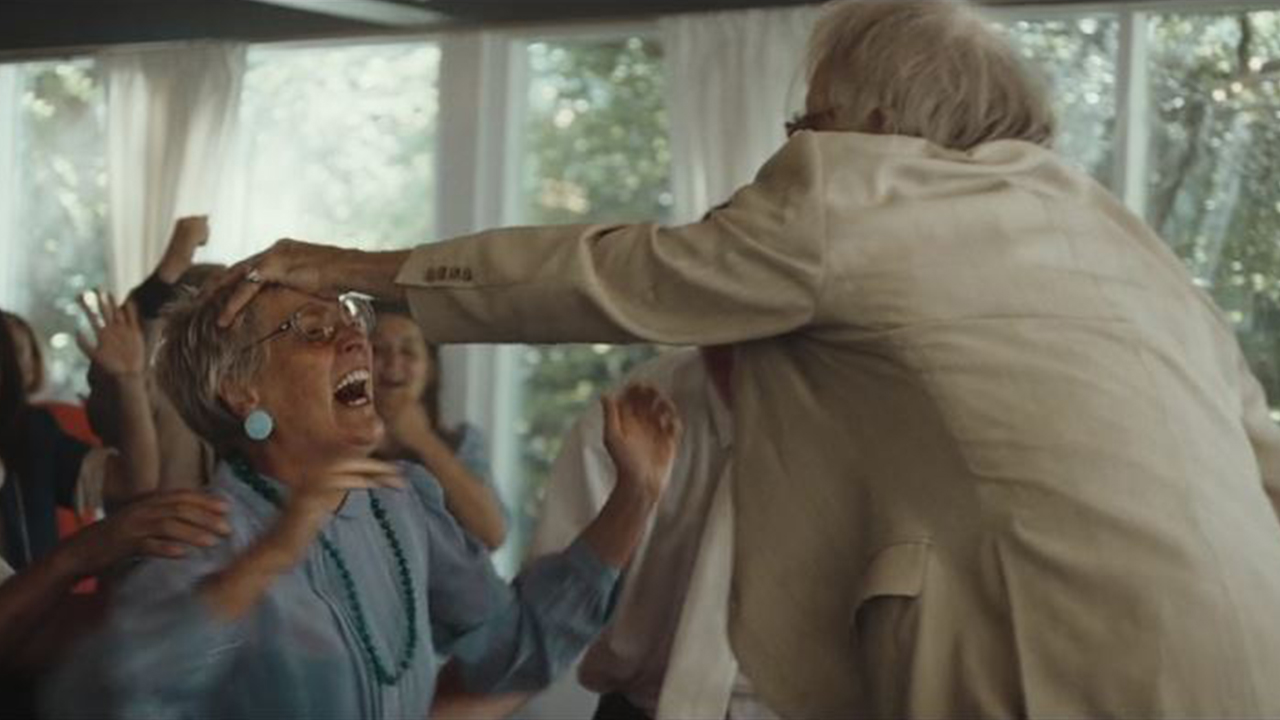 [dropcaps type=’normal’ font_size=’60’ color=’#ed145b’ background_color=” border_color=”]T[/dropcaps]he gullibility of those in need is abused by a priest, who uses the powerful charade of faith-healing to part desperate people from their money in Ian Isak’s video for Danish producer Simon Littauer’s latest single, Hubris.

Given their more than successful collaborative track record, when Littauer came to Isak with a bit of a strange approach, Isak couldn’t possibly turn it down: “The whole process of making this music video was quite different from how I normally work with a given track or artist; Simon Littauer asked me if I was interested in doing a music video for one of his tracks and I immediately said yes. We’ve worked together several times before and every time we’ve managed to create a synergy between his music and my moving images. Simon wanted to compose the track as a score to a narrative which meant that the whole idea for the video had to come before the track even existed.” 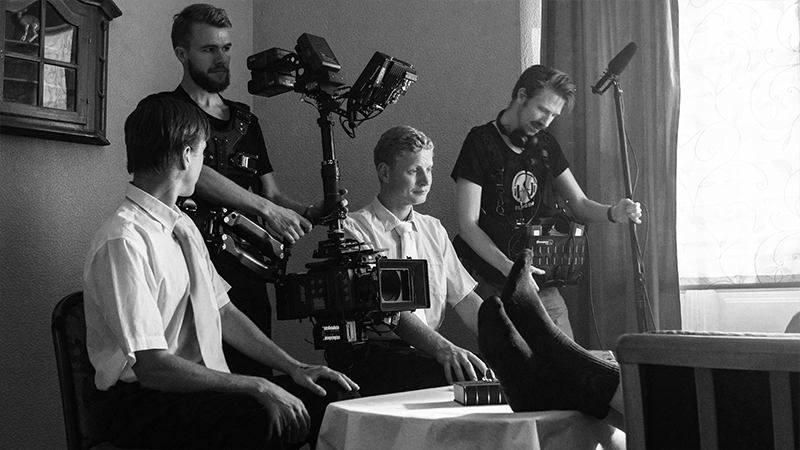 Isak says that this freedom offered by Littauer to basically start from scratch, gave him the opportunity to tuck into a topic he’d been interested in for a while now: “For a long time I’ve been fascinated by the televangelists from the 1980s and 90s. The way they managed (and still manage) to seduce large congregations and create a state of trance is to me very disturbing but alluring.”

Isak continues: “There are numerous clips of these sermons where people who believe in miracles will do almost anything to get in contact with the almighty – scenes which to me seem almost fictional. And that is always a good starting point for a story. The narrative more or less wrote itself and for me the energy and absurdity were the most important. The title, Hubris, was the last piece of the puzzle.”

The video opens with the priest ruefully contemplating the sermon he is about to give, searching for excuses to not have to go through with it. This conflict within the priest, the knowledge that he is all too aware of the fallacy he is portraying, paints a really interesting picture of the character from the off. 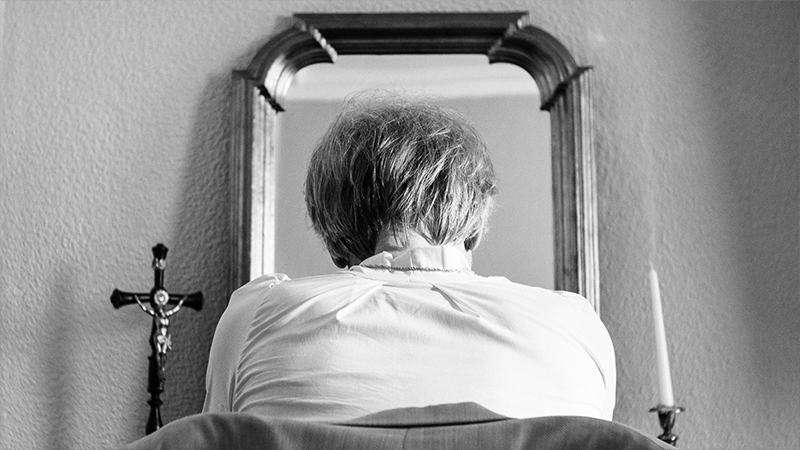 When asked how important it was to portray the priest’s self-awareness, Isak replies: “I believe every fraud deals with internal conflicts and of course him being conflicted creates a more complex character and a strong basis for a story to evolve. The priest as an authority has almost always been associated with pureness and we’ve been taught, since we were kids, that we can trust a priest. I believe that this blind faith can be very dangerous.”

As the priest walks through the doors of the church he is immediately changed, cutting an incredibly confident shape, he is in character. He leads the church in sermon, eliciting enthusiastic response from the group before beginning the real show. The healing. As a man in a wheelchair approaches, the priest summons the will of God and raises him to his feet. The congregation goes into raptures and soon he has a conga-line of willing participants begging for his healing touch. 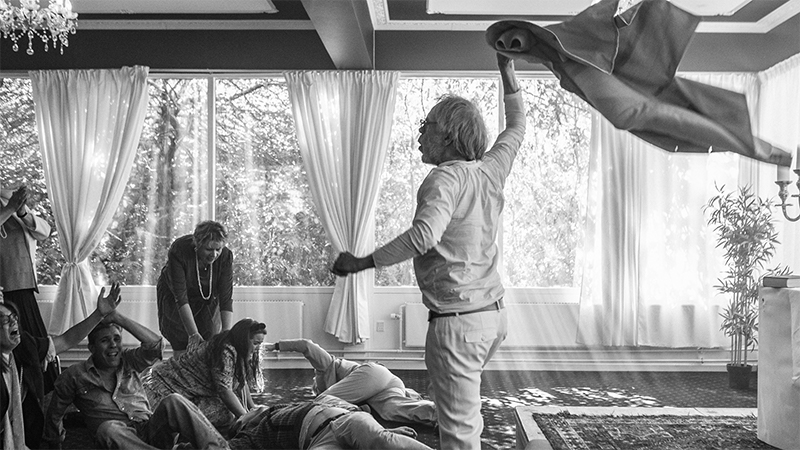 When the next shots depict the priest on a cable-access phone-in style TV show, then sitting at his dresser counting stacks of money and finally the man from the wheelchair arriving at his door to receive payment for his theatrical contributions, the final layers of the façade are pulled away and the priest’s motives are abundantly clear. Isak takes a moment here to reinforce the priest’s conflict before the crescendo of the video.

The priest assumes his position at the front of the hall and, perhaps feeling reckless with power, he directs his followers to jump. Now slaves to his every request, the people don’t even ask how high, they just jump. When he prompts them again and they again oblige. When his followers, overcome by faith or some unknown force, are unable to stop jumping, the priest begins to lose control. As he scrambles to halt the enraptured congregation, one of his altar boys falls to the ground, seizing. As he watches everything falling down around him, out of pure futility and spinelessness, instead of attempting to re-secure truth or reality, the priest instead chooses ignorance and joins the congregation in their zombie-like jumping. 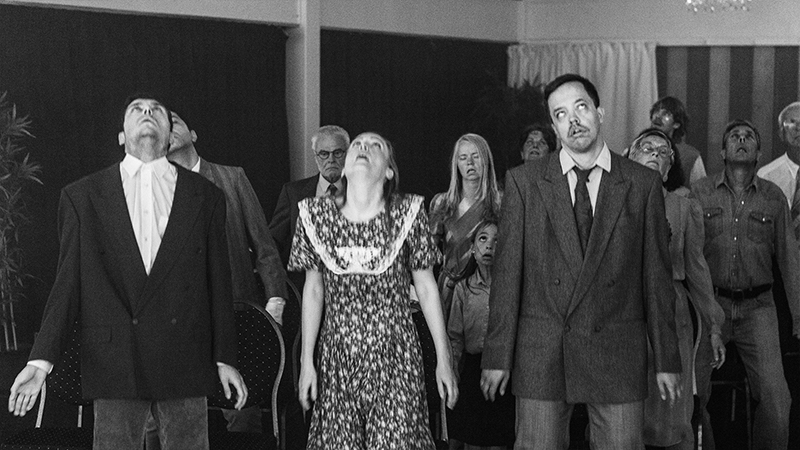 Not only is this scene wonderfully expressive of the music, it also closes the circle for the priest character. He had the opportunity to redeem himself, but instead chose to double down on his own delusion. There were very clear motives behind this ending for Isak: “It was never my intention that the priest should be able to deal with the situation. Something bigger than him has taken charge and as I see it he ends up paying for his abuse of power and sins. To me it was important that the priest doesn’t get away with his scam. His whole career he’s been praying for miracles and finally a miracle occurs – just not in his favour.”

Throughout the video, we see one character, played by Simon Littauer, sitting among the congregation, completely unmoved by the works of the priest. While he seems like he may just be the one smart person or the one non-believer, as he calmly watches the priest burst into flames in the final shot, the audience learns there may be more to this character than logic.

On this character, Isak muses: “Perhaps Simon is more than just a wise member of the congregation? Could he be the puppeteer or even God? I guess this can be interpreted in many ways. I’ll leave this last question open.” 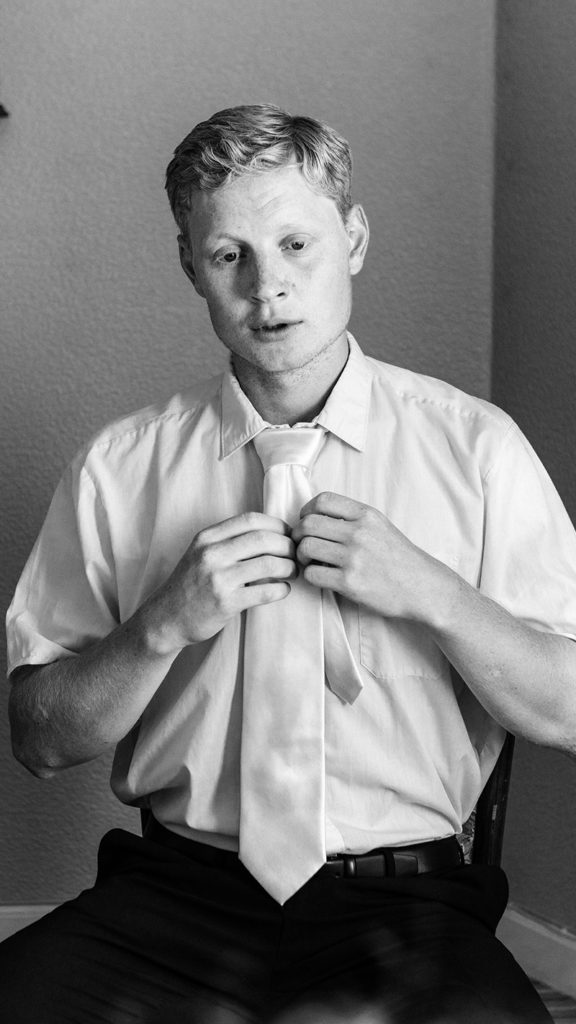 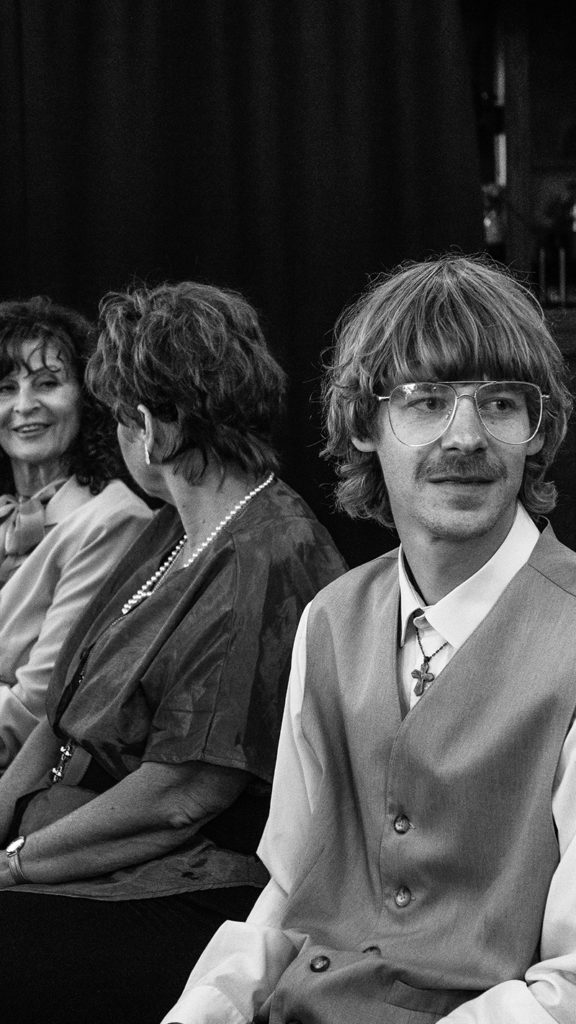 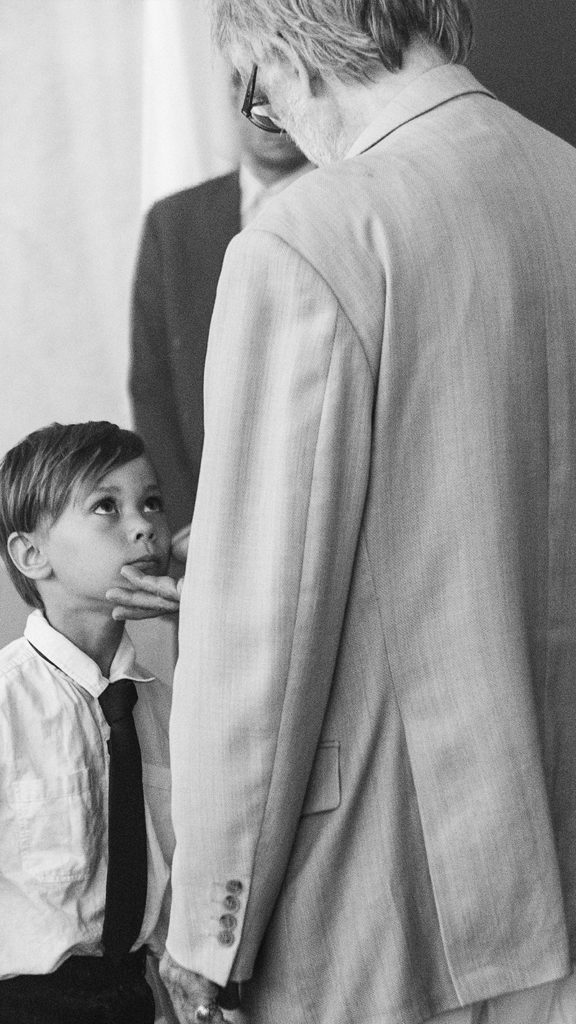 While the prologue scene of the video feels quite serene, bathed in pure white light, smooth moving camera and long cuts, once the music starts and the priest enters his church everything takes on a much more chaotic feel. The handheld camera shakes and surges with the congregation, with shots often framed by other members of the church, intercut with footage from a handi-cam as operated by one of the priest’s altar boys. This approach makes everything feel authentic and even very visceral, allowing the audience to empathise with the desperation of the crowd.

When asked about this approach, Isak replies: “I wanted to create a cinematic piece. But I also wanted to work with an energetic and chaotic camera that emphasized the mood of the narrative. The handi-cam has a very specific old look which matches the time the story takes place. And as the televangelists always film their services (so they later can be broadcasted) it was obvious to have one of the altar boys capture the service and use this footage actively in the video. I love how the handi-cam adds an extra layer of authenticity to the piece which wouldn’t have been the same without.” 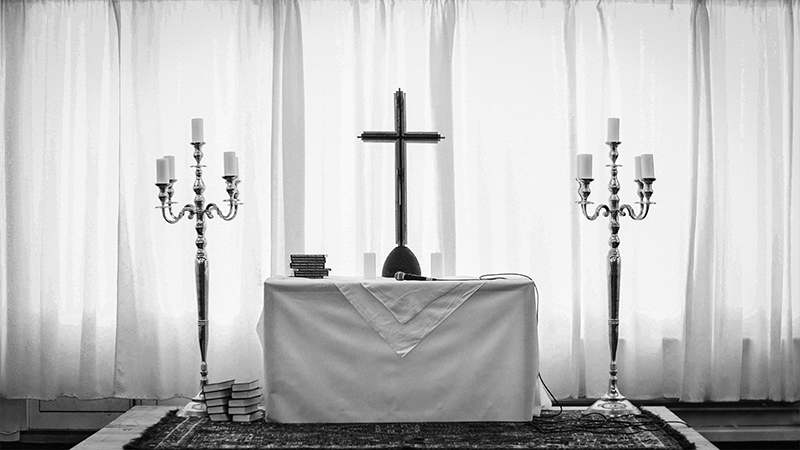 Isak’s dismantling of the faith-healing phenomenon makes for a really interesting meditation on the topic. Where many could have defaulted to displaying the entire concept of faith in general as a fiasco, Isak’s inclusion of Littauer’s character as some sort of supernatural being implies that perhaps there is some value in faith for those who need it. However, when this priest chooses to abuse vulnerable people’s faith for personal gain, the consequences are clear and swift.

Here is the official video for “Hubris“