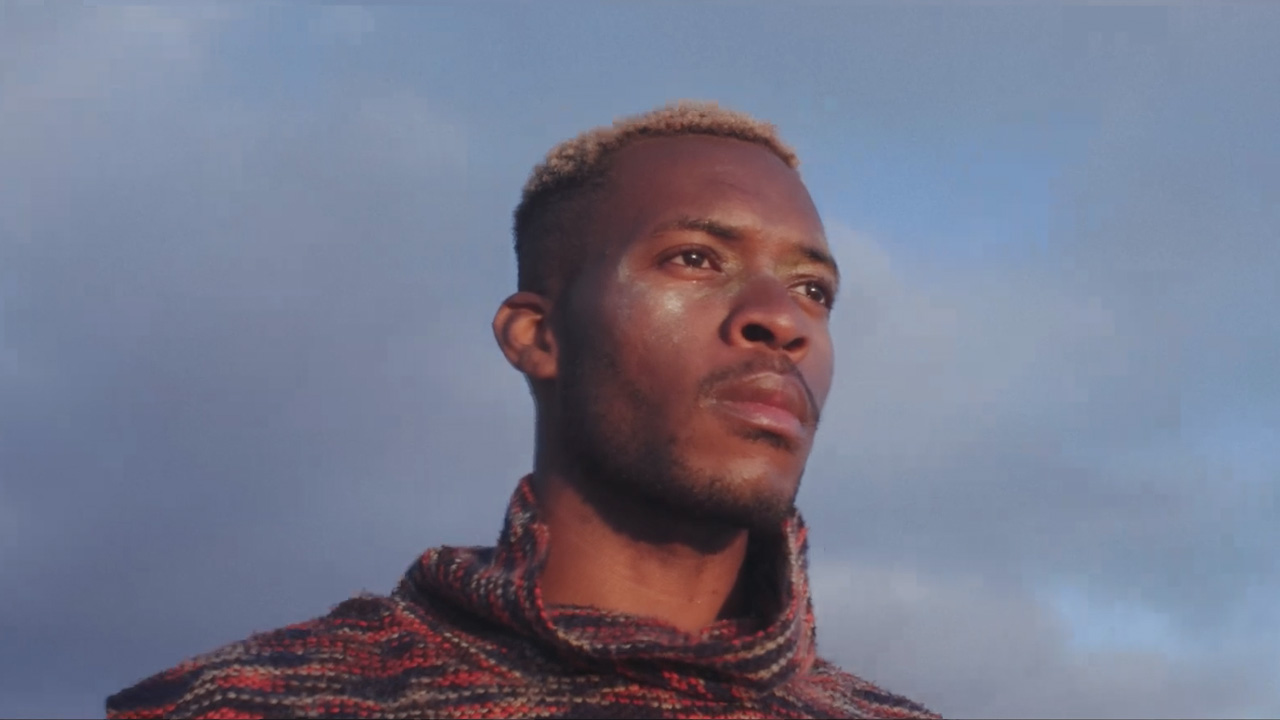 he new clip for ZEN by SoloSies is true to the track title and artist name both, bringing a visually stunning clip that takes advantage of the varying natural vistas it was filmed in. The track itself is based around a modern beat with SoloSie’s vocals and a simple but effective piano track across the top. The accompanying video is an array of movement through space, as the wandering artist ventures across open acres of sand dunes, evergreen forests and into the dreamlike echoing area between. It’s a change of scenery for director Justin Villar, who says:

“SoloSies really communicated to me from the get-go that he wanted really naturalistic elements in the video. I’m more accustomed to more urban visuals and cityscapes so I’m glad he pushed me into something I haven’t really tapped into before.” 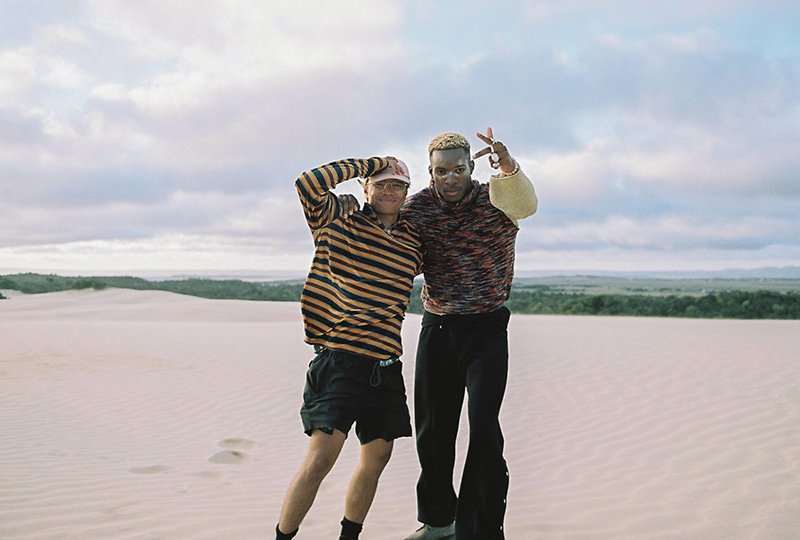 The clip uses both natural settings and bright lighting early on, transitioning to close shots of enclosed and darkened spaces as the clip progresses. It plays out almost as two different worlds and lives, contrasted against each other. SoloSies floats between these grounded spaces and the ethereal otherworldly, unfixed. Both are as spectacular as the other, the natural world represented with beautiful shots of forests bending and deserts, shifting almost to SoloSies’ tune.

“The through-line me and SoloSies wanted for the clip was for it to feel like a dream, for the Wanderer character (played by SoloSies) to feel like he’s just floating in and out of these ethereal spaces and visions. And so we landed on locations like Big Drift or the Dandenong Ranges to help sell this vibe since we just wanted the feeling of vastness and infinity. It was great because the furthest location was only about a 2-hour drive from the city. A few of our friends were like “where did you shoot this?” and “this was in Melbourne??” so I think that’s a good sign.” 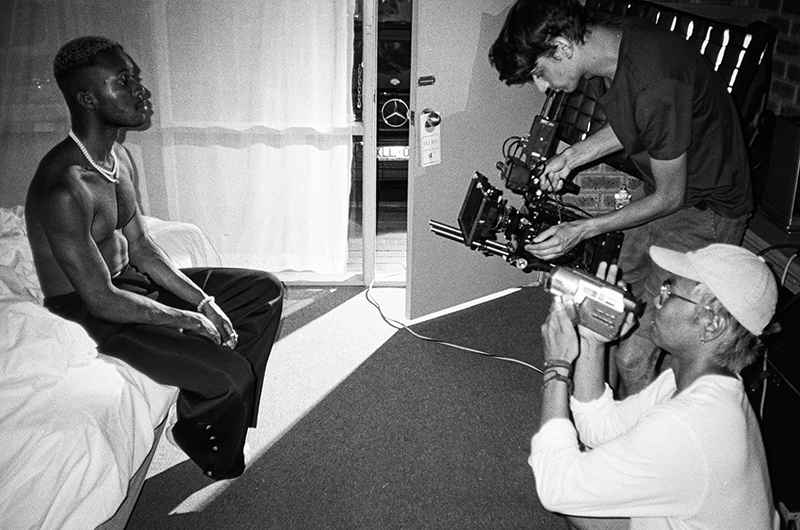 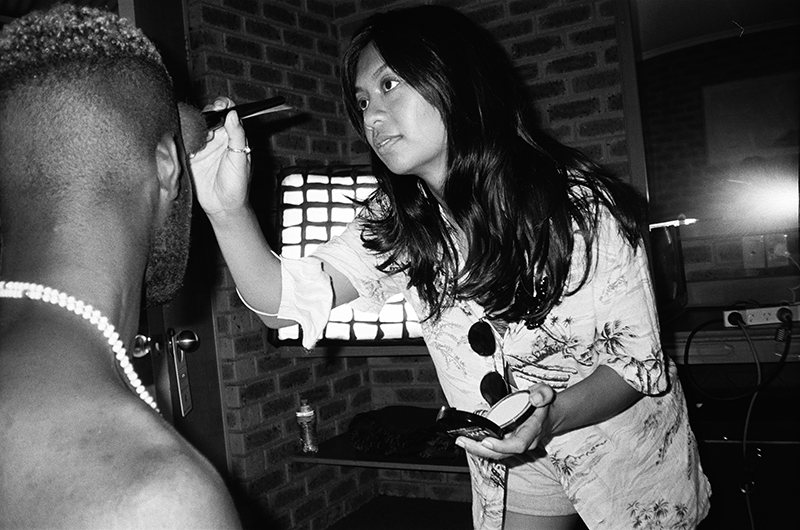 The varied sprawl of influences that the creative team drew from to create the clip shine through in the sheer diversity of the backdrops to SoloSies performance. There’s the tranquillity found in the quiet, empty spaces of the world but also the anxiety of claustrophobia and the nightmarishly ethereal. Villar cited examples of their influences, hitting the mark in terms of the style of visuals and storytelling.

“SoloSies basically said he wanted the video to be “ASMR for the eyes”. Our two main inspirations were lord and saviour Frank Ocean, and Euphoria. Naturally there were a lot of Dune influences in there just by virtue of shooting in sand. Also, a bit of Gus Dapperton video influences in there. And for the projector-echo effect, that was directly influenced by Brandon Cronenberg – I was reading a bunch of interviews he did for his body horror feature ‘Possessor’, and he said he tested a lot of the practical effects through low-budget music videos he did. So we tried to replicate it with our own flare.” 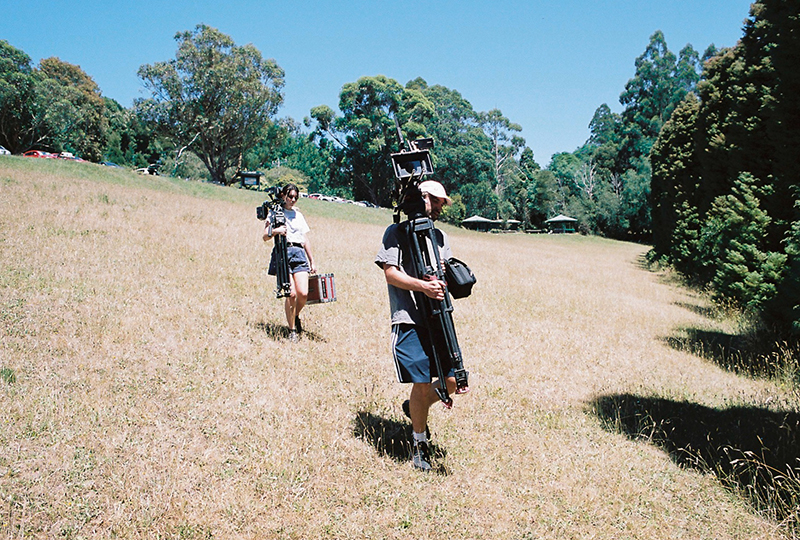 The clip displays visual flexibility though, and sections are integrated with animated visuals or VFX. Sections of the clip cut into an animated neon mouth, the work of VFX artist Josh Hackett, choppily singing along with SoloSies’ voice. The rest of the clip is punctuated with moments that play with lighting, smoke and after imaging with a focus on SoloSies’ dances and movements.

“The whole thing for this video was just to experiment visually – we weren’t sure if we could pull off half the stuff we planned, so our motto was to just try our best and see what happened. The common thing between these influences was that they explored dreams. We purposely made the visuals and the story ambiguous; a lot of Frank Ocean’s videos left a lot of room for interpretation, so we wanted to go along that path. But the theme of finding inner-peace and meandering through dreams are definitely at play here. But to be honest, we just wanted to see what looked cool. And luckily a story came out naturally.” 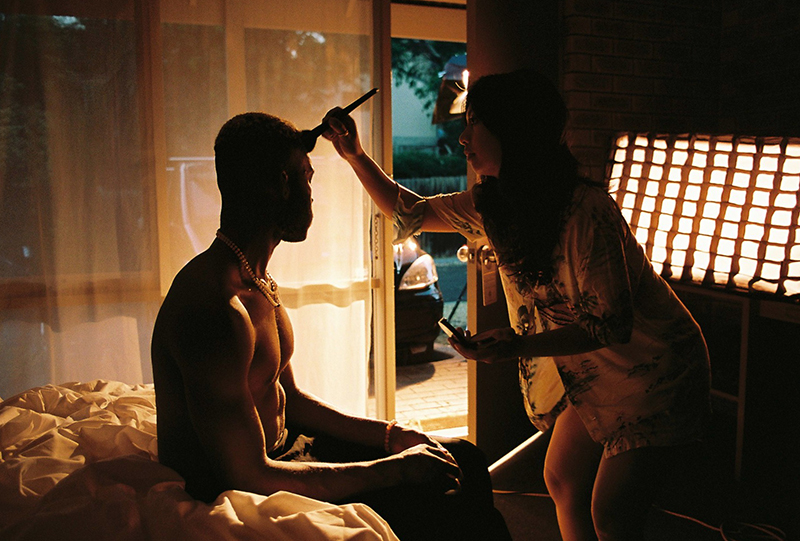 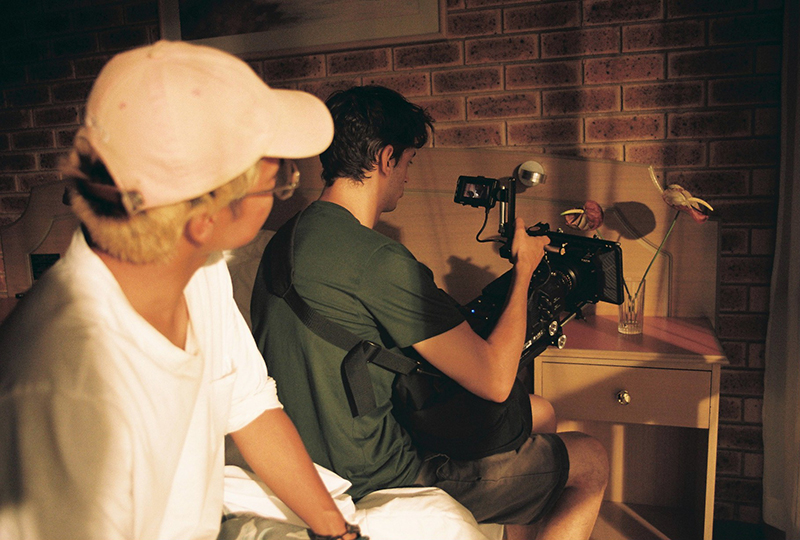 Despite the inclusion of the visual effects. Villar wanted to ensure that they didn’t take over the project. The time spent with animation in the clip is limited and the other effects are largely practical or in-camera.

“We’ve gotta thank Josh Hackett for those juicy, juicy VFX. Solo had all these ideas and it really challenged me and Josh to pull it off. The goal is always to marry reality with VFX rather than just rely on VFX fully. So, for example, we had a practical flickering light taped to SoloSies’ chest for that flame shot. We also filmed during an actual sunset for that closing shot, then Josh added in the giant sun.” 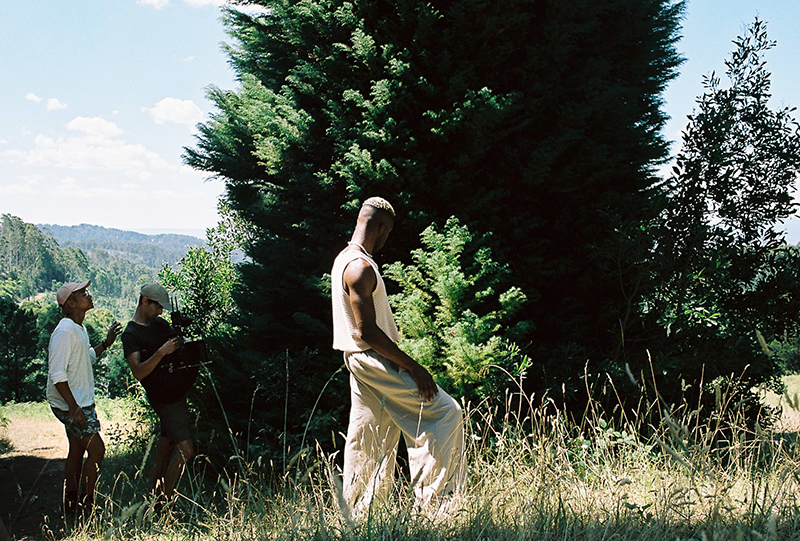 All shoots come with their challenges, especially on the technical side of things. With a lot of outdoor settings in the clip, it was tricky to manage lighting and other elemental interferences. DoP Jayden de Oliveria used a Sony Fs7 Mk I, combined with Zeiss Standard Speed lenses for a compact but effective setup, key when traversing the spaces to capture the right shots. de Oliveira also detailed some of the lighting used:

“Lighting gear was a pretty standard kit of tungsten and HMI’s being used alongside a Skypanel S60, all grabbed from James Thompson Film Services. Our major challenge was shooting out in the desert in Wilson’s Prom. We planned on having a set of bounces and neg for Solo but due to high winds we couldn’t work with much, instead we had constant waves of sand hitting everywhere. I’m still finding sand in equipment being used on that day.” 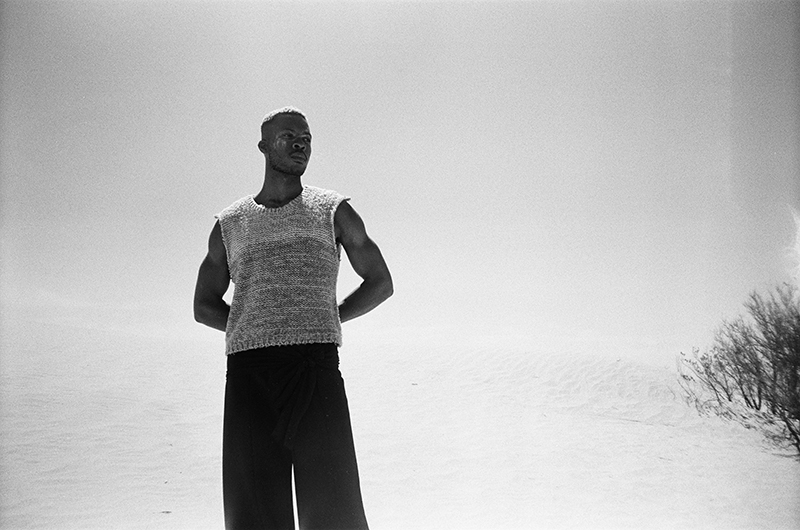 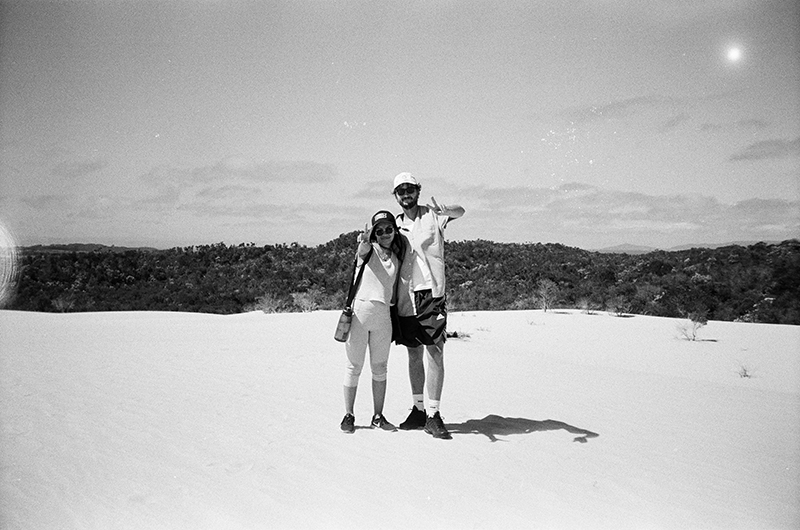 With Villar and SoloSies coming together, they have produced a clip that melds perfectly with the track and captures, if nothing else, an atmosphere. They make use of some gorgeous natural vistas but also camera and lighting and editing tricks and techniques to produce a special accompaniment to Solo’s latest outing.

Here is the official video for ‘ZEN’