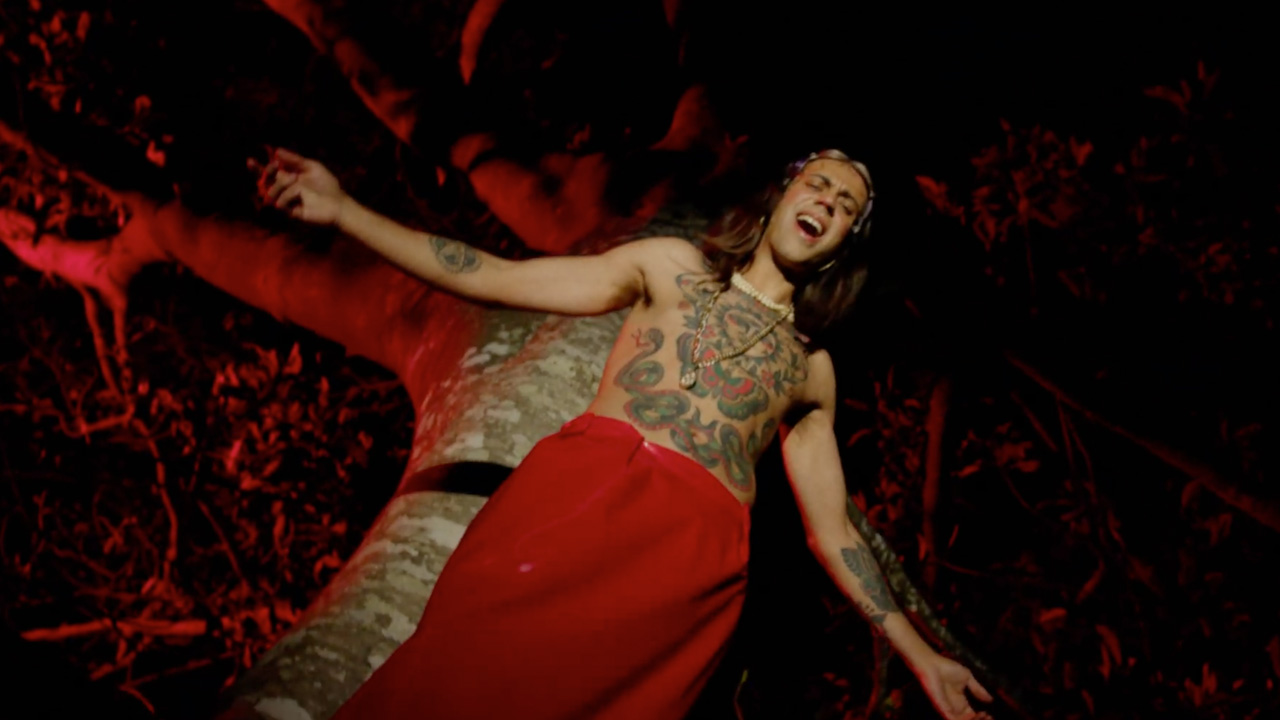 When faced with adversity or uncertainty, there are a dozen tried and true ways that one can choose to look for answers. For Wiradjuri multi-instrumentalist Velvet Trip AKA Zeppelin Hamilton, catharsis has to come in the form of a good wander, both inside and outside your head, all the while hoping you’ll figure out exactly what it is you’re looking for. The lyrics of ‘It’s Only Human” ponder Zepp’s history of looking to a higher power for help, and the absurdity of ‘praying to a god that has done you wrong’. Sydney director Clover Ryan, already a tried and tested collaborator on Hamilton’s work, knew from the beginning that a lot of exterior locations would be needed to convey the message. She comments:

“We were really blessed, we had such a great crew on board. They were willing to tough out a sunset to sunrise shoot in unforgiving terrain. Lugging gear across sand dunes and in water, Zep who had to perform in next to nothing in 10 degree weather and water, all while racing against the light. It was a long night, but everyone blew it out of the park, and it was so rewarding in the end.’’ 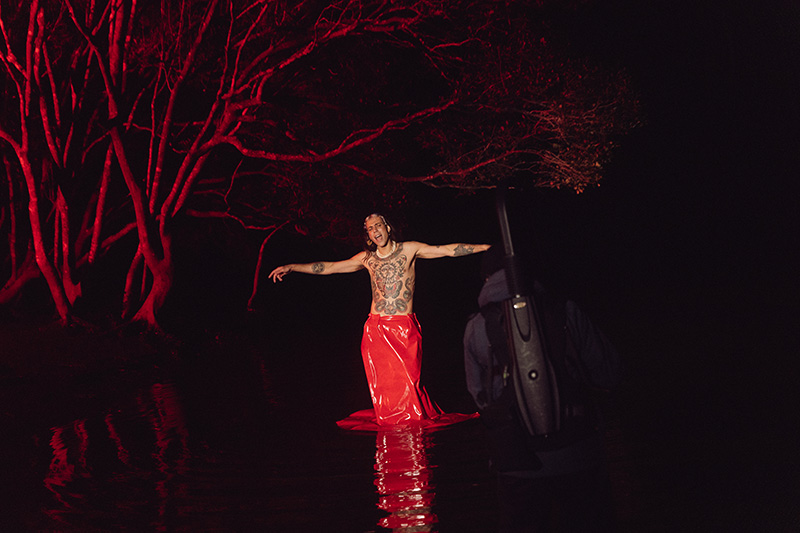 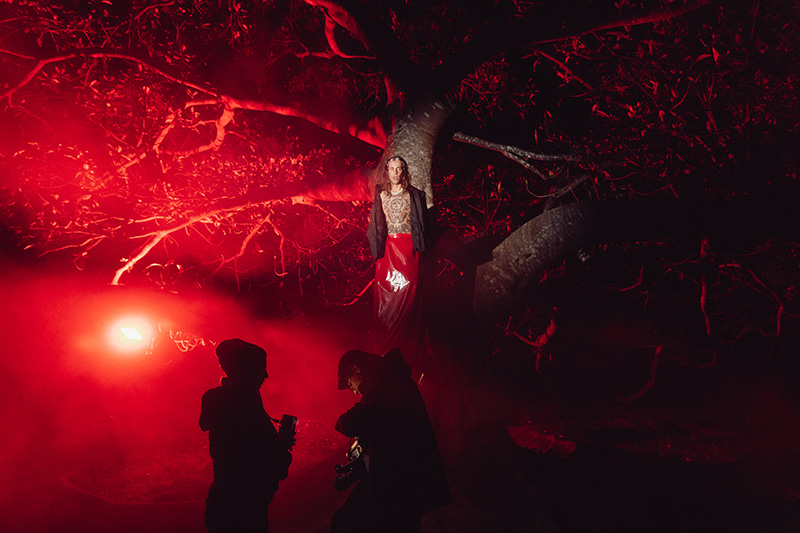 The nature on display is augmented – the enormous tree, the creek and the fields, are all shown with something slightly altered or alien. The red lights that flash down through the branches and light up the mist, or the intricate glowing grid that’s seemingly growing straight out of the ground. None of these elements are lingered on, but they work well in getting us into Zepp’s headspace. Spotlights flash on and off, illuminating the musician singing in a waist high creek at night, or stretching his arms up into finger-like red branches. This is intercut with a more conventional scene of Hamilton performing in a red-curtained studio, an odd contrast until the end where we pull out and see that the red room is a two-walled facade with no ceiling, and a beautiful sunset behind.

“I guess on a conceptual level that scene is meant to function as a sort of stepping out of your head, or  taking a step back and looking at the bigger picture. Gaining perspective, really.  On a more practical level it was trying to make the most out of what we could do with limited time and resources haha. That was actually shot in Zep’s friend Matt Toon’s backyard. We really lucked out with that.” 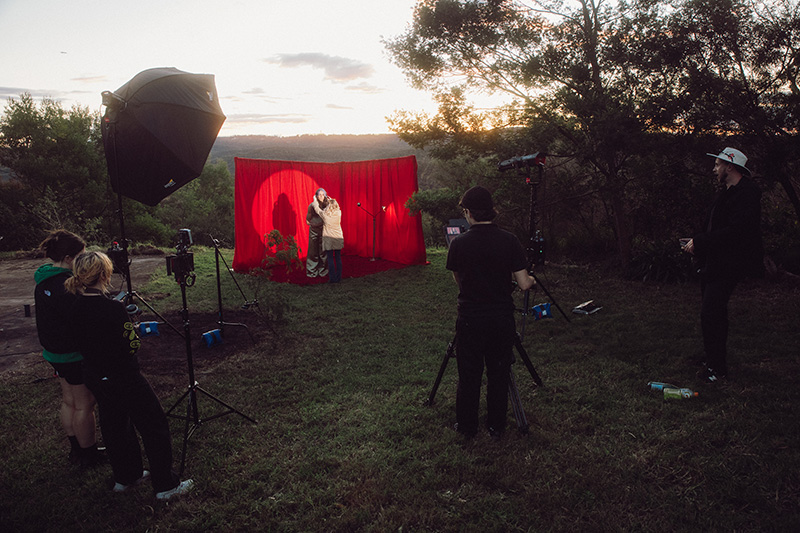 The huge, towering tree that almost becomes a character within itself wasn’t originally a planned element, it was discovered while Ryan and Hamilton were inspecting McCarrs Reserve in NSW’s Northern Beaches, and the pair fell in love with how it looked when lit unnaturally. The sand dunes that Hamilton climbs throughout the clip were shot at a beach less than 15 minutes from the reserve – allowing the crew to push and shoot the entire clip in the space of one night. Knowing that they’d be pressed for time, DP Kit Baker kept the lighting and camera setups simple, bringing only what he knew they’d need for the highly mobile shoot. Kit remarks:

“We used a Canon C300 mkiii in 16mm mode with an Angenieux 11.5 – 138mm lens to give  the footage a more vintage aesthetic. That also enabled us to get long zoom shots which suited the direction and are nice and quick to shoot compared to using a dolly. We had a generator and battery bank so it was pretty straight forward shooting on location with the spotlights. Carrying the gear around a sand dune at night is always tricky though!” 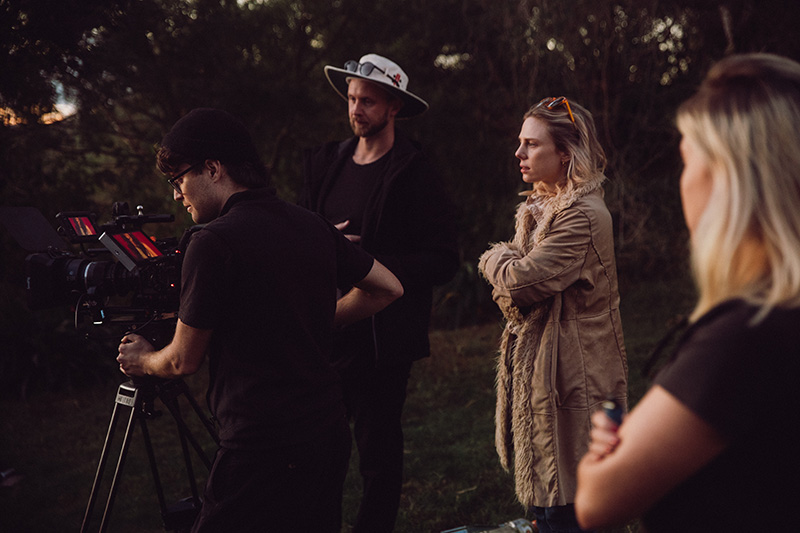 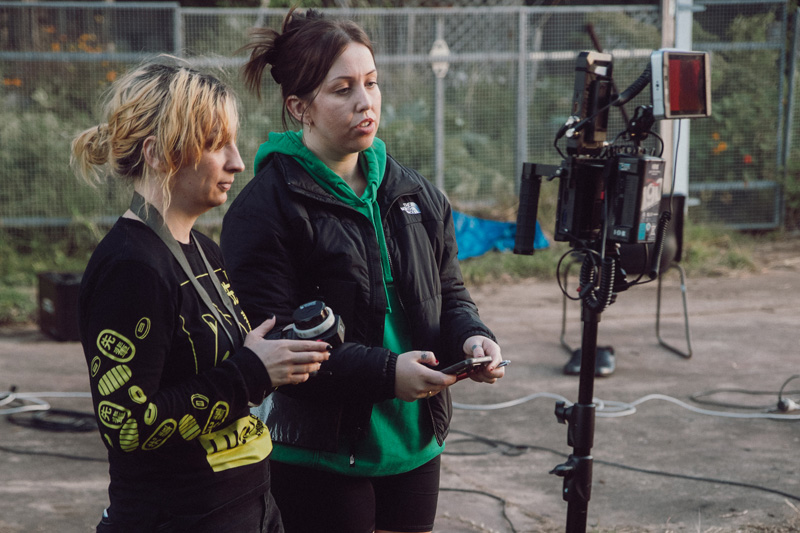 Throughout his journey, Hamilton is clad in a range of eye-catching outfits that flow behind him, showing off his heavily tattooed chest. The openness of the outfits mirror his exposed and vulnerable mind, and the draped fabrics enhance his fluid choreography. Clover explains the specific intentions that she took into the costuming process:

“It was important that Zep’s outfits felt sort of elusive, and slightly surreal. The goal was divine and celestial, while still being quite visually interesting and adding to the story. So we went with a lot of luminescent fabrics and textures, silks, pearls, gems etc. Anything that will add lightness and reflect that light back into his environment. The red PVC skirt was originally meant to be a part of, and blend into a set behind him in the  water. There was meant to be this curtain drapery behind him made out of a really thick red semi-opaque plastic, however it wasn’t as malleable as we thought and didn’t end up  coming together on set. I’m kind of glad it didn’t though – the simplicity really works on its own.” 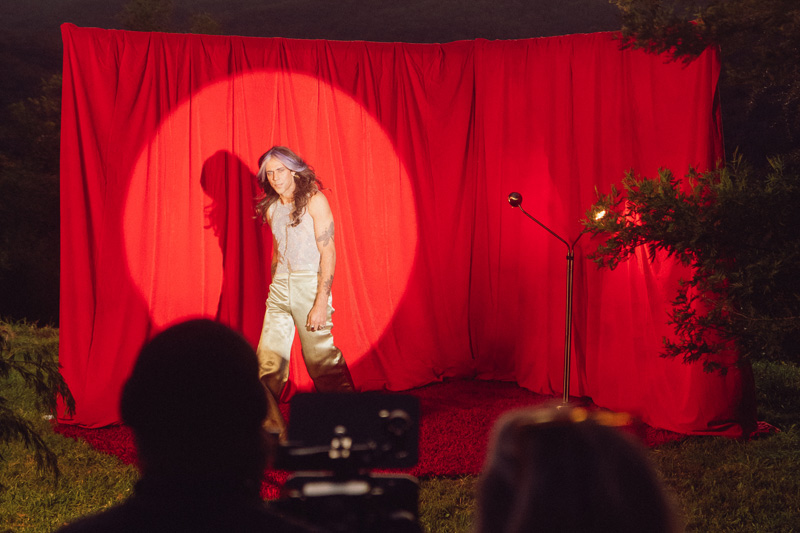 Clips like this are an encouraging reminder that unique and engaging music clips are sometimes only one night of hard work away. We’re all better off for projects like Velvet Trip being able to elevate their music and create visuals to match. And we can only hope that if Zepp finds the catharsis that he’s looking for, it won’t diminish his and Clover’s collaborative output.

Here is the official video for ‘It’s Only Human’

FEATURE: AVÉ – Peace I Leave With You (Dir. Gavain Browne)