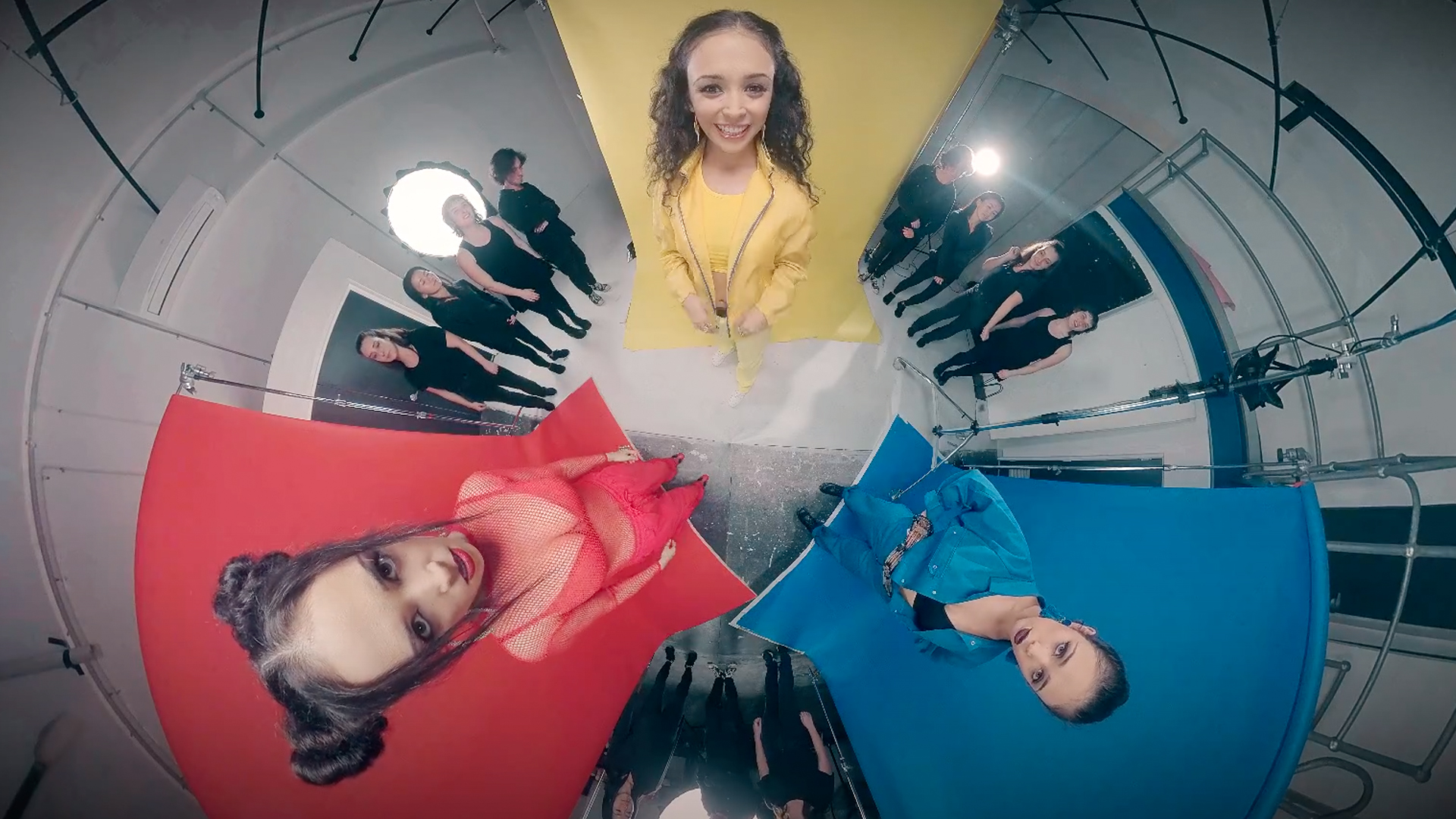 hat begins as a stylish but by-the-numbers performance clip for pop/soul singer Taylor B-W’s funky single ‘I’m So Broke” quickly evolves into something more elaborate and sophisticated. Taking place in a studio packed with lighting and camera gear, Taylor bounces her way through the set pieces of the video, performing in glowing face paint and duetting (or tri-etting?) the song with copies of herself. An interesting concept in its own right is elevated to greater heights by director Jordi Marin’s choice to shoot the clip on an Insta 360 Pro 2, a camera capable of filming in all directions at once and stitching the angles together to create a seamless omni directional piece of footage. 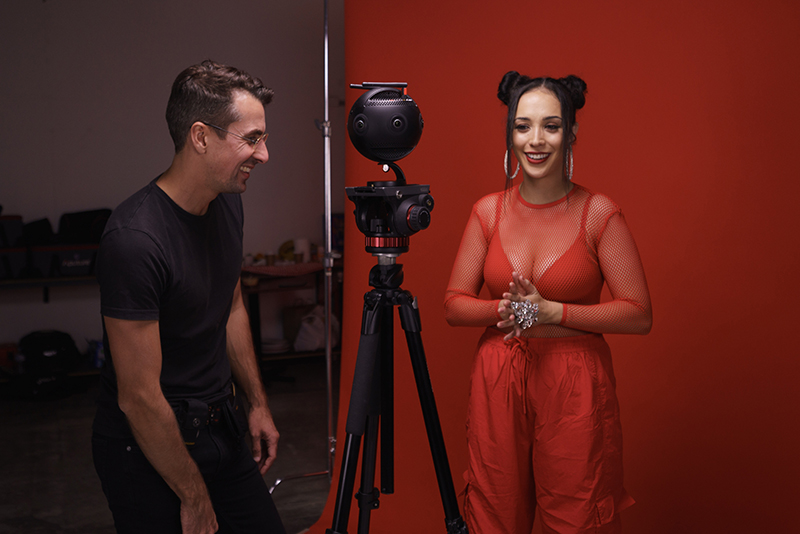 Jordi opted to shoot the clip in 360 but edit and deliver a conventional flat video, allowing him to create unnaturally precise, synchronized camera moves. This mix of mediums was a perfect middle ground, taking advantage of the freedom that a 360 camera provides without having to sacrifice control over the final viewer’s experience. There’s always a chance, no matter how well designed the action is, that a distracted audience member might pan away and miss a crucial piece of a 360 video. Jordi elaborates:

“I’ve worked with 360 cameras before and knew what they were capable of, but never used them at their full potential.  I researched other video productions using a 360 camera as the main camera but I couldn’t find any.  I wondered why.  I don’t anymore. I found that, even a high-end 360 camera is still a mistrustful and buggy technology to rely a full shoot on. Furthermore, stitching the 6-camera footage was the biggest time waster; the automatic software was unable to achieve the required quality, so everything needed to be done manually, masking every cut. Nevertheless, this extra layer of complexity just made the result more creatively rewarding.”

Alongside the official video, Jordi and Taylor have released a 360-enabled one take behind-the-scenes video of the shoot process that allows for panning around the studio for the duration of the song. This peak into the production process can be seen below:

Taylor came across Jordi’s work during her search for a film maker who could create visuals to match her song. She fell in love with a documentary about an English artist that Jordi had produced using a 360 camera and knew his style was a perfect match. Despite Jordi’s familiarity with the technology, he makes note of the potential for pitfalls when shooting 360.

“Probably most of the problems [in the shooting] were coming from camera issues but, because we tested it previously, we were ready for them. I can’t stress enough how important it is to test new ideas before giving the green light, you might find that that idea wasn’t worth it.  The stitching [of camera angles into a seamless take] could probably make a full article about its do’s and don’ts, mostly don’ts… The 360 camera that I worked with before was a 5K 2-lens camera with barely any movement on it. In this production, we used an 8K 6-lens camera with a lot of movement and contrast between the foreground and background. We pushed the limits of the camera so far that the automatic stitching was unable to achieve the required quality. Every single lens of every single shot needed to be stitched manually masking elements in and out. A post-production nightmare that I didn’t take into consideration before. Test ideas first.” 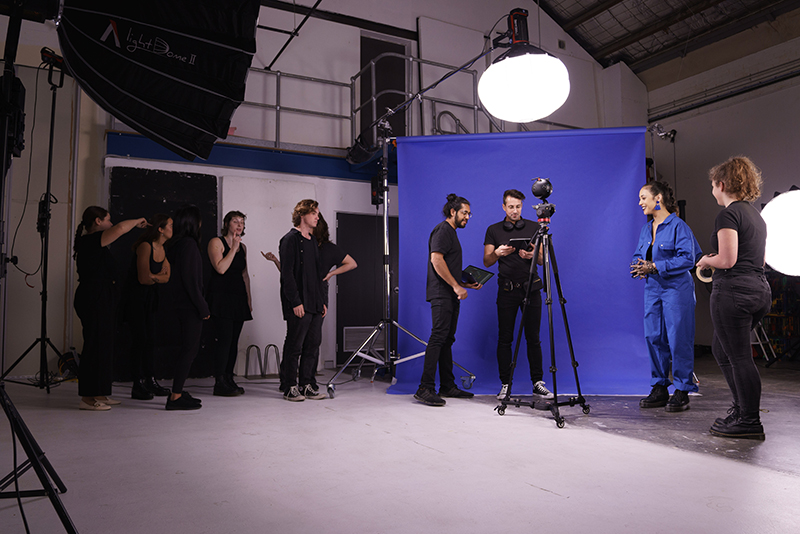 Advances in technology, though still in their infancy, allow creative film makers to blend mediums and deliver hybrid clips like this one. Jordi’s intention was to slowly introduce 360 elements as the clip progressed, sticking to conventional effects like in-frame duplication and rotoscoping for Taylor’s doubles until the final sequence of the song. At this point the frame stretches and warps to fit perspectives from all around the camera into a single frame. It’s a dizzying but doubtlessly impressive crescendo for the video. A funny and energetic behind-the-scenes video was shot featuring Taylor’s off-camera antics as well as footage of the 360 setup in action, which can be seen below:

The thumping bass of the track provides a plethora of choice moments to synchronize a punch-in or punch out. During these quick movements backup dancers appear in frame, dressed in all black like film set PAs and matching the moves of Taylor’s colourful duplicates. Each of the duplicates is clad in a single colour and performs in line with the artist’s three chosen moods; somber blue gives way to aggravated red who ultimately has the spotlight stolen by bubbly yellow. As with any compositing effect, lighting had to remain consistent throughout all the shots, and Jordi, Taylor and DP Ansh Bose chose Camperdown Studios in Sydney because of its perfect dimensions – large enough to fit all the elements but small enough to light consistently. Ansh explains:

“Experimenting with lighting is always loads of fun especially when it’s a 360 shoot! The biggest challenge is ensuring lighting is well contrasted without removing shadows and keeping a balanced, even light throughout the studio. To achieve this, I set up a lantern modifier as my main on a boom arm which sat right on top of the 360 camera. This not only provided a soft diffused light but also ensured shadows under the eyes were negated. Additional lights were then added and removed depending on the scene with a range of modifiers from snoots to octaboxes. Overall, the lighting had to be planned with precision and detail to ensure the entire studio was correctly lit during each scene. The 360 camera certainly provided some challenges but it also allowed us to get creative with how we adapted to the situation.” 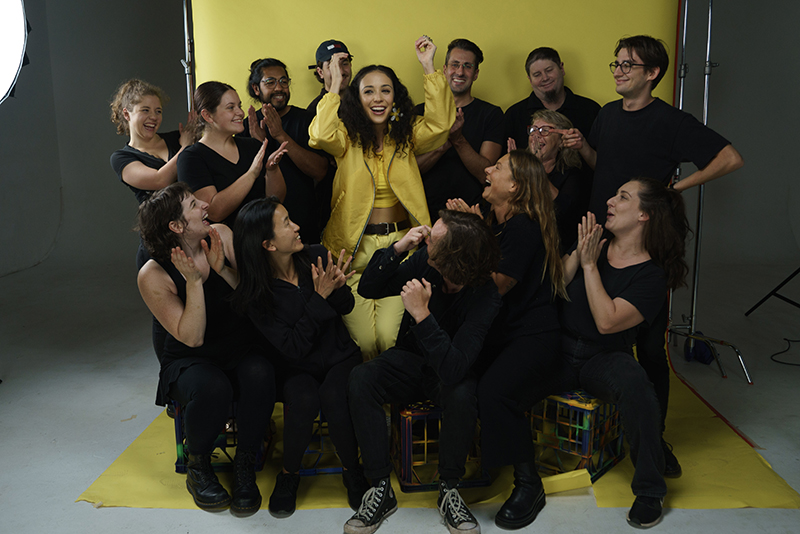 The results speak for themselves, and the crew can rest assured that their efforts resulted in a stylish, medium blending clip. The clip also serves as proof that experimentation, though inevitably frustrating, can pay dividends. Jordi reflects on the experience:

It’s always refreshing to find new ways to motivate yourself, and combining technology with visual effects is what drives me. I always find music videos the best canvas for creativity and new ideas, nothing is too far. A bit of advice: go crazy with ideas, test them, and compromise ideality with reality.

Here is the official video for I’m So Broke