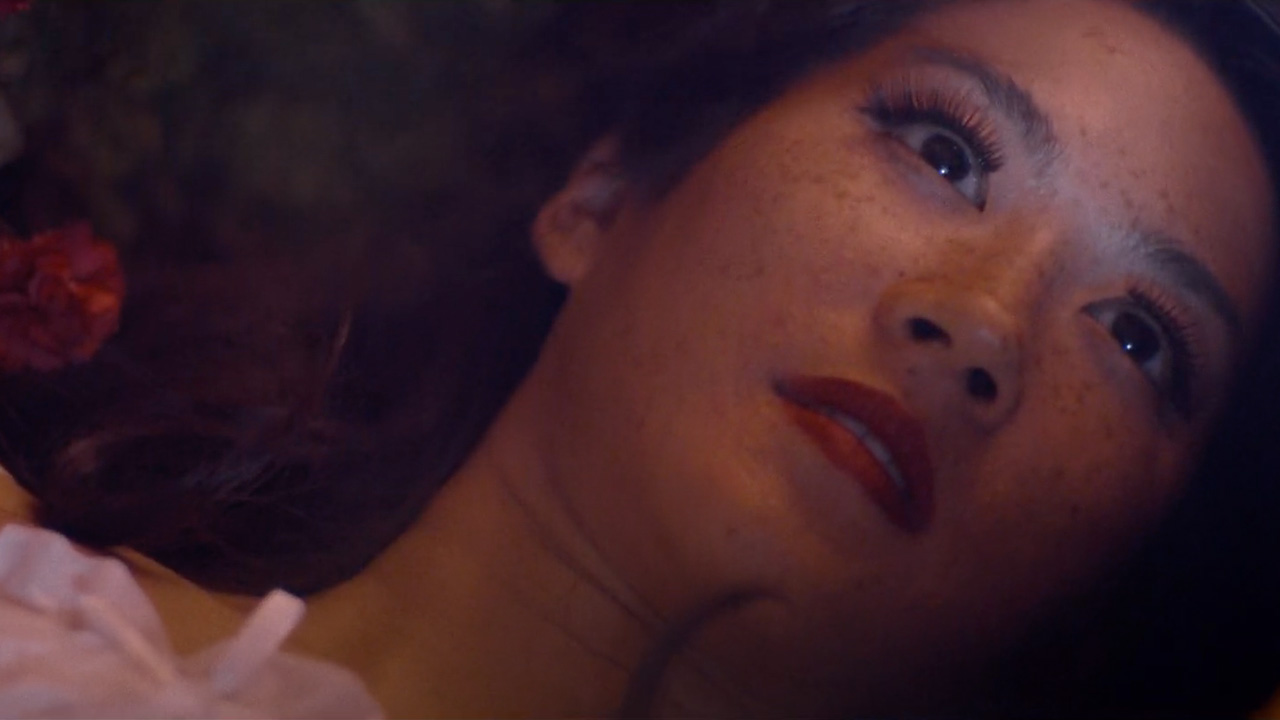 Drenched with a vintage nostalgia “Bones” excecutes a brilliant homage to poppy French and US styles of the 50’s, 60’s while simultanously embracing its’ artistic and critical aspects, namely the work of surrealist filmmakers Lynch and Godard. The clip centers around an idyllic and colourful domestic space, but one spiced with a dark and perverse element. From our first shot our lead Stacy Chu is seen performing a traditionally domestic and feminine act, washing dishes, however as she turns it is revealed that in her hands she is holding a bloody rag. What follows is a uniquely cinematic, surreal, dark and beautiful collection of vignettes about love, beauty, femininity and fantasy.

Co-director Jill Sachs speaks on how the team decided to approach this surrealist tone.

“I think when Ange and I were starting to ‘break’ the story, there was always a kind of dance around how literal we wanted the narrative to be. From the very beginning we bonded over our love for David Lynch surrealism and French New Wave, and we thought it would be great to try to combine those things in this project. Both genres, or inspirations, give the viewer a lot of freedom to interpret or feel what they will. Yet the song Bones had a really clear narrative origin, and I didn’t want to veer too far from the emotions that inspired it. While who is ‘dead’ or ‘alive’ or in danger isn’t overtly defined, I hope that the core themes come through – the youthful idealization of the wrong person, the romanticization of romance.” 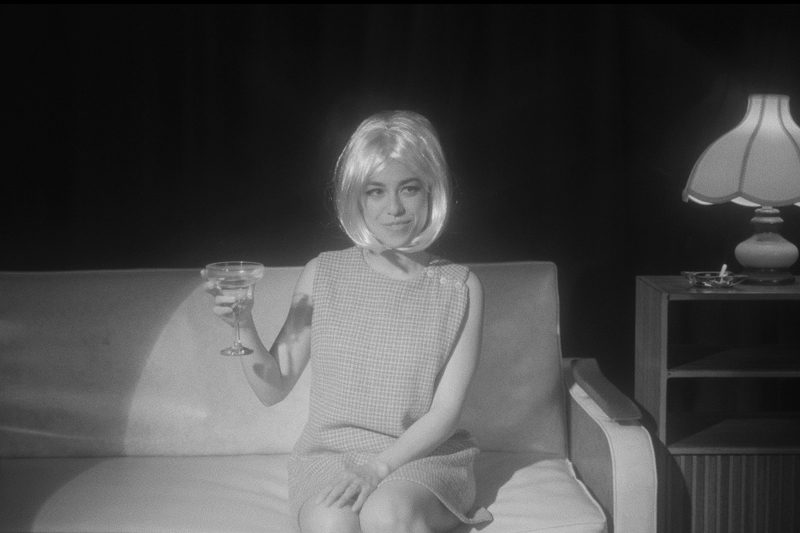 There are certain songs that just sound like they perfectly belong at a movies’ finale, or complementing a character-changing montage, and this track is one of those. It is clear that cinema and ‘the cinematic’ is deeply tied to Telenovela’s musical aesthetic. Angeline Armstrong speaks to the songs filmic influences and how they flavoured the video.

“Bones was one of the first songs we wrote together as a band, I think at the time we weren’t even called ‘Telenova’ yet, we were just three musicians meeting up and making music together – unsure of what the outcome would be. All three of us – myself, (Angeline Armstrong), Joshua Moriarty and Edward Quinn – naturally gravitate towards a cinematic sound in our songwriting, and across the whole ‘Tranquilize’ EP I was aware of this Lynchian tone across the mood and feel of the music. Even though we weren’t ever directly referencing his soundtracks or specific films. Bones to me always felt like the most ‘self-contained’ story musically, it plays almost in it’s own three-act-structure with the different musical ‘scene changes’ that occur. We definitely had a Bonnie and Clyde-esque romanticism front of mind when writing that chorus – at the time I had no idea the three of us would eventually form ‘Telenova’ and even less so that we would actually get to make a music video for this shot in California!” 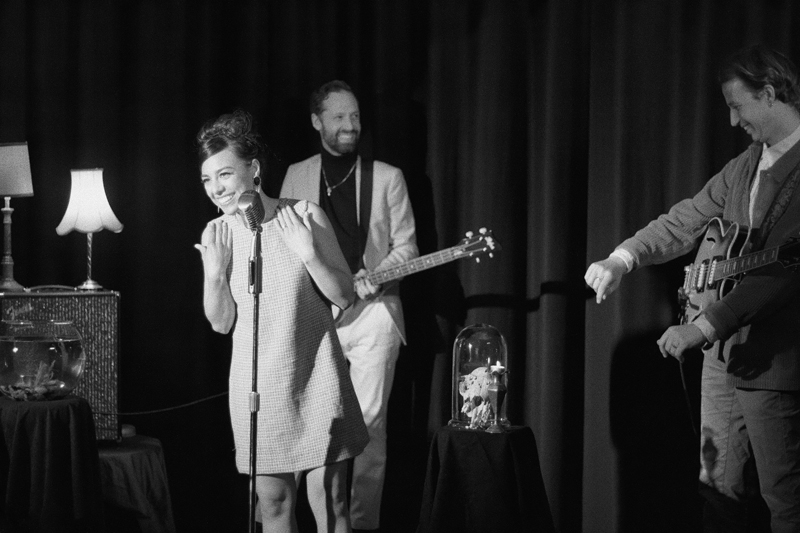 Telenova perform in the live scenes of their music video.

North American and French art from the mid 20th century rarely questions its own whiteness, and almost never questions how this cultural notion is inherently tied to conceptions of beauty. Filmmakers Angeline and Jill (“both half-Filipino” or some other comment on the fact that we share that same Filipino heritage, but have grown up in Western cultures) comment on their own experiences surrounding beauty, whiteness and how they adapted these cultural capstones of the surrealist and avant garde genres.

Jill: “There was definitely a shared experience I think we both had, as biracial film nerds growing up obsessing over bombshells that looked nothing like us – our Bardots, Monroes, and tortured Hitchcock blondes. Having our actress, Stacy Chu, (and Angeline also) dance around in a blonde wig definitely speaks to this. There’s some deeply messed up notions that come up, when defining beauty as this unattainable thing that you’re not.”

Ange: “And the strong association that we as a culture still wrestle with in ‘beauty’ being associated with ‘whiteness’. It was definitely way more pronounced for me when I was younger and these kind of conversations about representation and diversity on screen were few and far between. I had such unhealthy notions of what it meant to be ‘beautiful’ – as a kid I’d literally put sunscreen and talcum powder on my face to look whiter…” 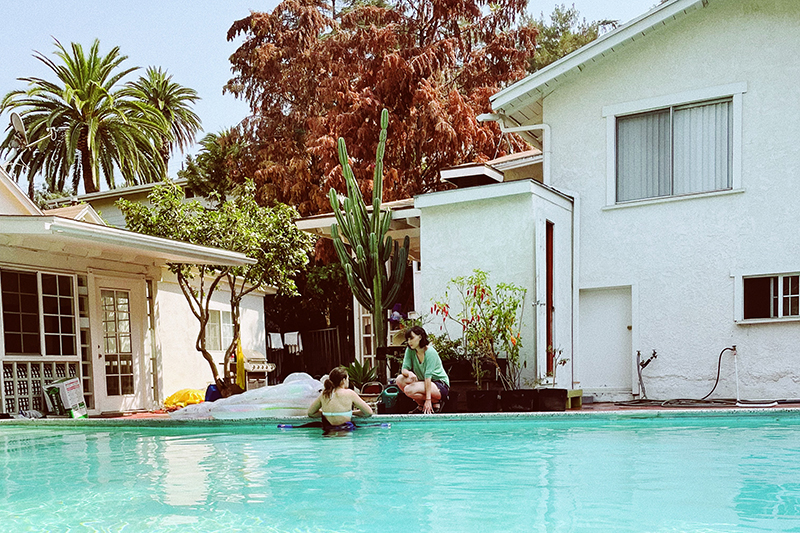 The production for ‘Bones’ literally spanned across the world, and excels as an example of how practical restrictions induce creative opportunities. The Mullholand drive-esque performance sequences were shot in Melbourne Australia, while all the ‘narrative’ content was filmed in California. Fascinatingly, this international collaboration was sparked by a cold-call email out of the blue. Angeline recounts her experiences:

Ange: “I mean, for one thing, Melbourne was in the midst of lockdown when Jill reached out, so shooting a video entirely in Melbourne wouldn’t have been a possibility at all without Jill! Being based in California, Jill heard Bones on KCRW radio (NPR) and immediately started forming a team who were keen to shoot something for it after having also recently scouted this idyllic 60s film set in Hollywood (the one that comprises the lounge room, kitchen, bedroom and bathroom in the final film clip). […] When Jill sent through her initial mood boards and thoughts on the clip, it was kind of this magical moment to realise that a filmmaker on the other side of the world, after hearing only one Telenovela song on the radio, already had a feel for the cinematic references and artistic influences that have informed my creative practice over the last 10 years! That she could feel that all through the song was pretty incredible. She just got it.” 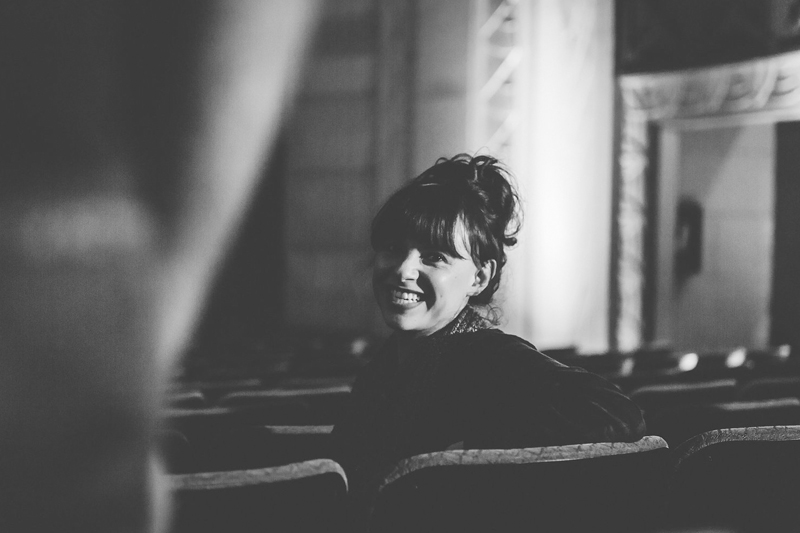 Director Jill Sachs on the other side of the lens.

What is undoubtedly impressive is how two teams working across oceans on the same project managed to coordinate one aesthetic style. The blend between the performance and narrative sequences is relatively seamless, even though in reality they were filmed in wildly different locations with wildly different budgets. Allie, the Californian Director of Photography and Daniel, Melbournian Director of Photography comment on how they independently achieved the clips’ signature visual style.

“The retro vibe really came from our location and incredible production design, mixed with moody lighting which we finessed in the color grade. We shot on the RED Komodo with Zeiss Classic ZF.2 lenses, which have a great balance of softness and sharpness without feeling too modern. One of our initial visual references was photographer Gregory Crewdson – his work evokes a moody, uncanny darkness that we really loved. Though as the visuals developed, we incorporated a lot more French New Wave influences which lead to the looser, lighter moments.”

Daniel Bolt: “We had almost zero money for the Melbourne portion of the shoot, and so I offered up my Canon C500 Mk2 to use along with my vintage Leica R lenses. With the Telenova’s performance footage, we wanted to build upon the nostalgic, vintage look of the footage already shot by the LA crew, yet heighten it even further to achieve an almost otherworldly feel. We had a shoestring budget, so used a Dream FX filter I got from a small company in LA, and coupled it with a $50 6-point star filter to catch the flares from the highlights in the live performance.” 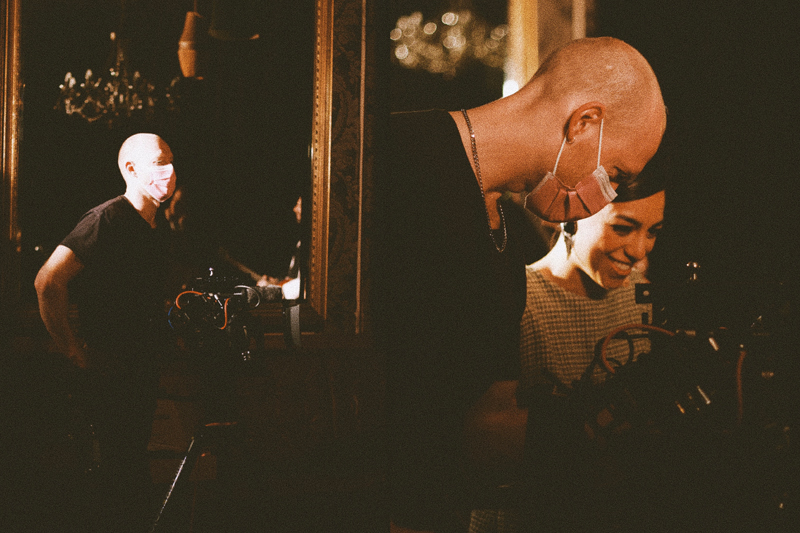 Jill: “Our amazing Production Designer, Elliot La Plante, works on a tv show by day. She somehow managed to pull this all together in the few hours off she had off, within only about 2 weeks. She was able to use some resources and contacts from the show to help us out, purely because they believed in her and believed in making things for pure love of the craft. [and] Our LA wardrobe stylist, Rachel Kinnard, was able to rent real period clothes from a studio. It wasn’t the ‘budget’ option, but I think the authenticity really helped sell the aesthetic. We didhfittings the morning of the outdoor Malibu shoot, as Stacy and Trent were getting makeup done (by the wonderful Kelly Park, who also did the FX makeup of the flowers at the end of the video).”

Ange: “My friend is a costume designer and op-shopping retro enthusiast, so I basically raided her wardrobe for a 60s specific outfit (took about 60 seconds to know which dress and shoes I wanted). Our HMUA Amelia Mills and Prod Designer Shenae Louise in Melbourne were great at finding some tasteful, minimalistic ways of honing in on the time period – the ash tray, retro couch and dresser table, and the Twiggy-inspired make-up look. The blond wig was the result of a Facebook call out – think it’s a costume from a dress up party. Did smell a bit like beer but nothing a bit of sun and some hairspray couldn’t mask on set haha. Funny how glamorous it can all look once on camera. You’ve seen behind the curtain now…” 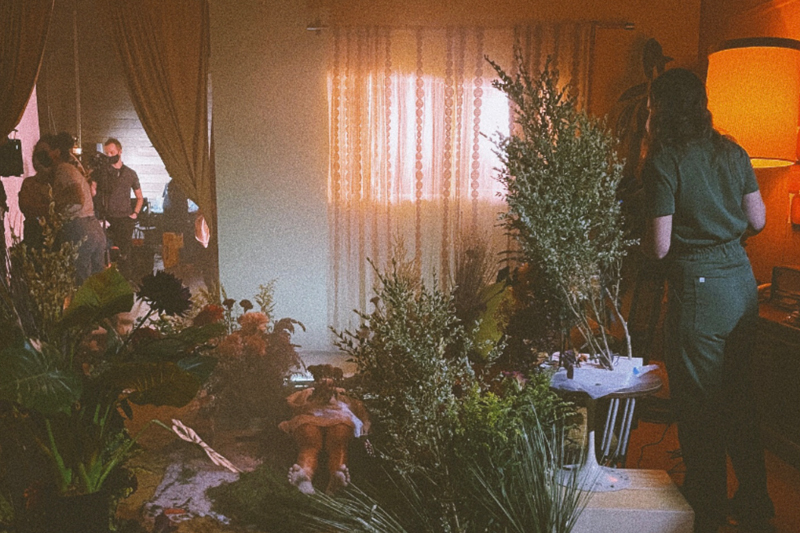 Elaborate set-design and marvellous work in the California filming location.

The clip is put together like something straight out of Godard’s handbook: Energetic cuts, contrasting abstract imagery that builds strong and juicy symbolic ties. For example, the overflowing cocktail glass leading into vibrant submerged flowers communicates a sensation of drowning opulence or the suffocating demand for freedom within a confining identity. However, providing enough coverage for the edit proved to be a massive challenge, as not only was the piece five minutes long, but was also shot in a style characterised by fast-cuts and sporadic edits. However through a lot of improvisation and inventive direction, the filmmakers made it work.

Allie: “I was always looking for moments to add variety and make the most of our setups. We had certain coverage that we prioritized, but we definitely left room to improvise on the day. At one point during a lens change, I noticed how the flashing red and blue lights created a cool abstract effect when there wasn’t a lens on the camera – so I rolled on it and that footage works so well in the edit. With the track being so long, getting those types of shots really helps add variety.” 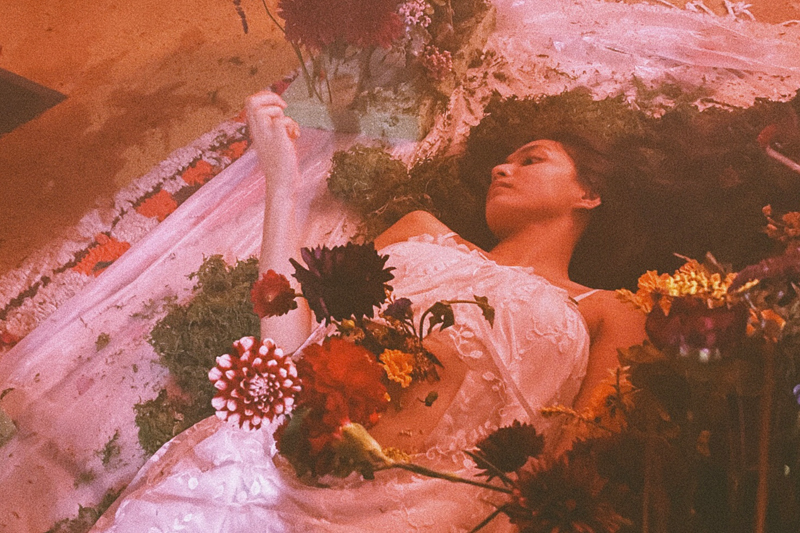 Stacy Chu (Lead Actress) takes her peaceful position for the final scenes of the clip.

Once in a while we come across clips that excel in working with, not against their restrictions, and Bones is one of these projects. Bones is an excellent example of collaboration through creative difficulties, a tour de force that pays homage to many aspects of classic cinema while simultaneously providing a nuanced and thought through adaptation. It meditates on love, fantasy and identity all the while complemented by a dreamy and heart-thumping track.

Check out this hypnotic and musical homage to classic avant-garde cinema now.

Here is the official video for ‘Bones’