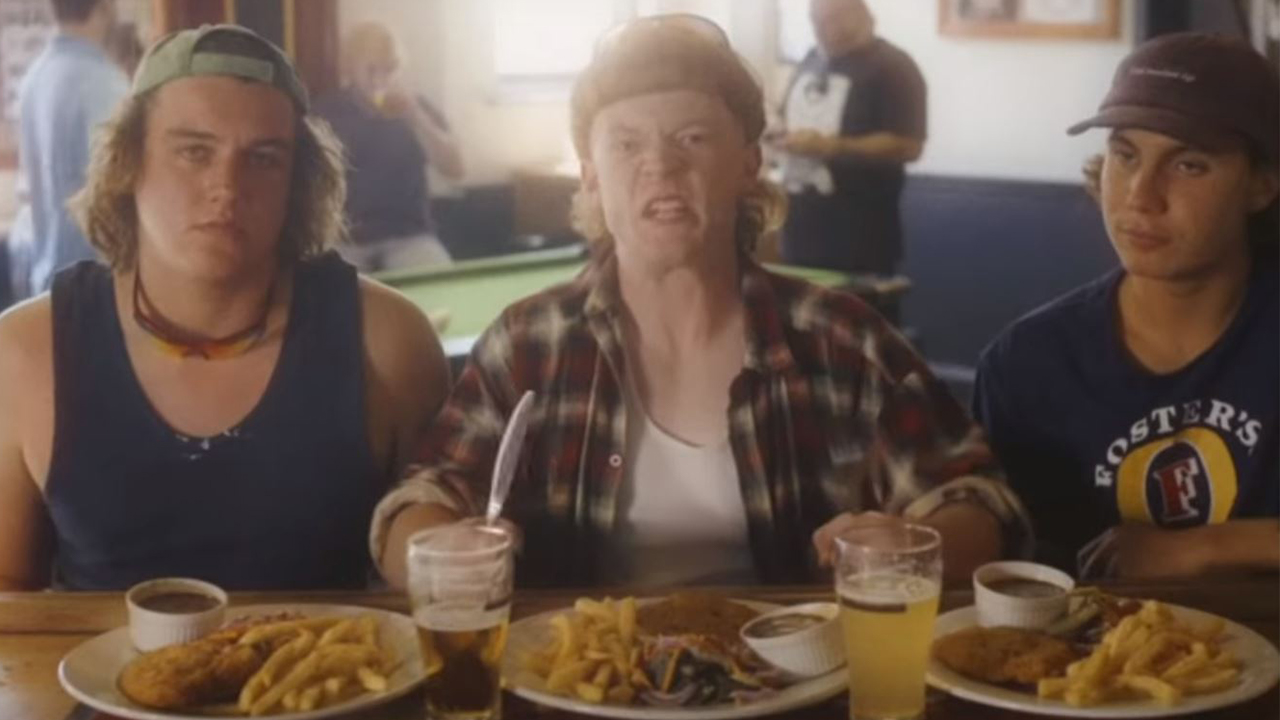 [dropcaps type=’normal’ font_size=’60’ color=’#ed145b’ background_color=” border_color=”]F[/dropcaps]ollowing the viral success of their breakout “Smoko” video, Sunshine Coast trio The Chats’ new clip for “Pub Feeds” once again embodies their trademark embracement of Aussie bogan-ness that has resonated with audiences since forming in 2016.

Initially, the self-described “The Beatles if they had mullets and drank VB”, appear in signature speed dealers and flannos as we open on the band riding, Goodies-like, on a triple tandem bicycle on the way to the local TAB.

“In initial mucking around with the band, the fun part was trying to plan how they’d ‘travel’ from the TAB and the pub,” director Matt Weston describes. “We’d humoured the idea of one bloke on a Segway, another on rollerblades, and the last dude on a penny farthing, but I couldn’t help but get the idea of the Goodies riding around on the three seater bike out of my head.” 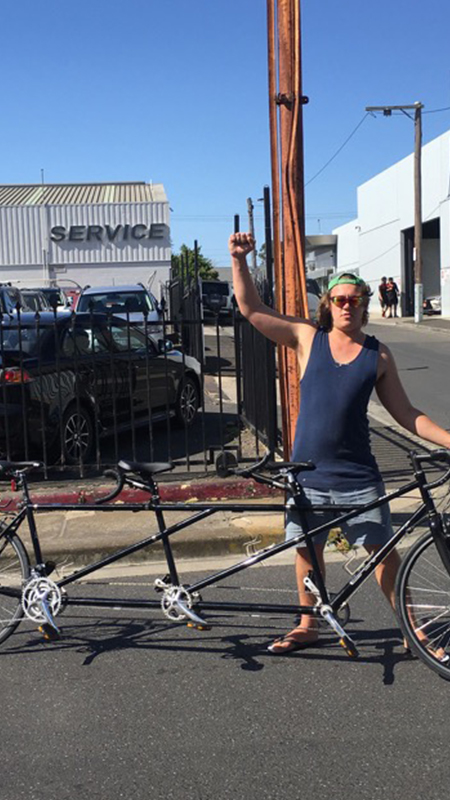 However, sourcing the bike seemed to be another problem in itself. “It was a nightmare… Three-seaters are so rare out of Europe. It felt like our only option was to build one, which we couldn’t afford.”  Eventually, they managed to find one of the only triple tandem bikes in Australia, luckily located in Geelong, right where the band was filming.

The clip cuts between tongue-in-cheek, almost GoPro-like low angle shots as well as side on footage as The Chats pedal comically in and out of the frame, legs wheeling in sync. 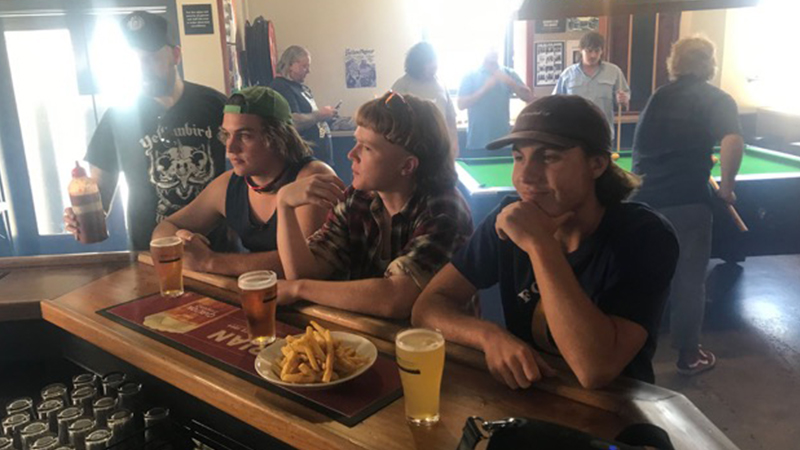 The group’s success is evidence of the growing demand for this ‘less serious’ representation in the music industry, as Weston contemplates the band’s appeal: “Anyone that doesn’t take themselves too seriously are always going to resonate well, at least in some ways, with an Aussie audience especially… there’s a bit of bogan in all of us.”

Consequently, the self-aware scruffiness of Weston’s clip mirrors that of the band’s aesthetic, with singer Eamon Sandwith next receiving a text from “The Man” that takes the boys from the TAB back to the streets of Geelong.

After dismounting the bike at the local pub, the video sees the Chats sing about chips and schnitty in between mouthfuls of chips and schnitty (another profoundly moving sequence) in what will surely cement the song’s status as a tradie anthem. 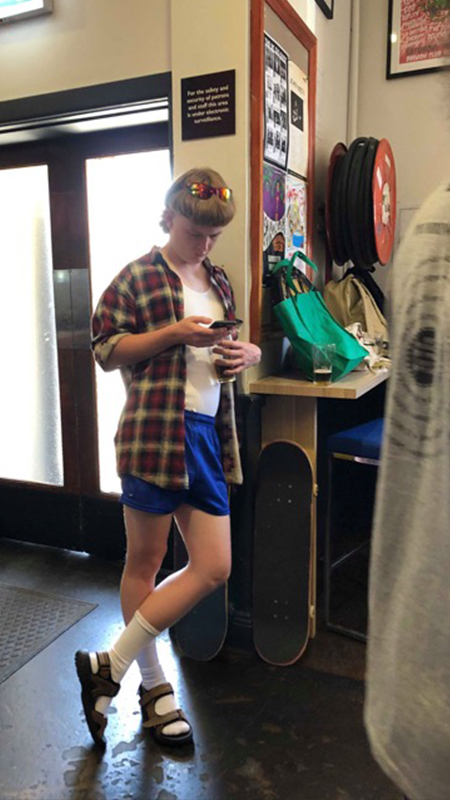 As the clip continues, the instrumental takes us away from the pub to an artfully framed moodier, backlit shot of Price playing guitar in the pub kitchen. Featuring in a cameo is The Chats’ mate and Pist Idiots member Jack “Sniff” Griffith as a mangy chef breaching some serious OHS laws and frying up schnitzels with a cigarette dangling from his lip.

Further reinforcing their manifestation of shitty Australian nostalgia, the Pub Feed video features a four by three square format to replicate the grainy, sun-drenched haze of 90’s film. Achieving this 16mm aesthetic was “technical as,” says Weston. “The DP Ben Blenner used a Black Pro Mist 1/8 to give it a bit more of that washed out look…We ran a film grain and video fuckout thingo over it in the grade. It was fun being able to commit to that 100%.”

The whole filming process was assisted by the fact that Weston has a close relationship with the band, becoming co-manager after their Australia-wide tour with the Cosmic Psychos, (who are also under his management) just last year. The shoot didn’t come without its challenges, however, featuring a crew of “only a few people.” And despite no major injuries, perhaps the next video won’t feature a tandem bike, Weston states. “It was incredibly uncomfortable to ride, and most of the weight and effort is put on the front rider. So all the bits riding down hill to pull up at the pub was causing Pricey (Josh Price, guitarist) to want to kill everyone. They didn’t want to shoot any more and told us all to get fucked! I don’t think they’ll ever do that again.” 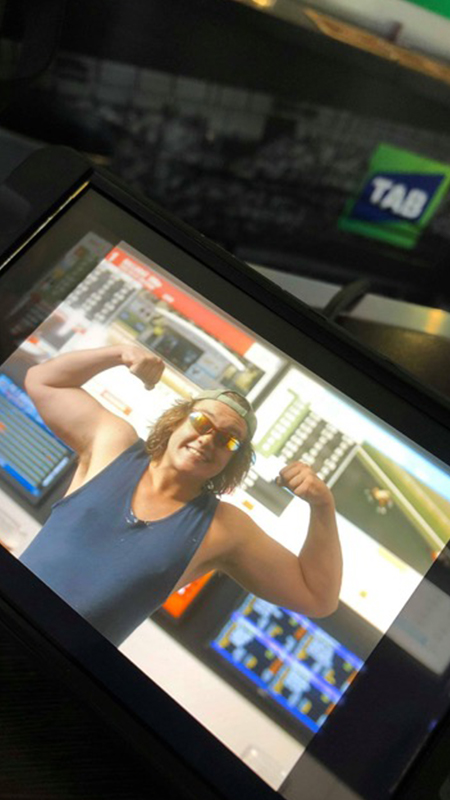 As the song draws to a close, Weston ends on a shot of a chip-scattered plate with the song’s title scrawled in tomato sauce. It’s a faithful depiction of The Chat’s inherent “bit of boganness”, and an engaging clip that only leaves us hoping their next venture heralds the modest servo pie.

And, finally, as for Weston’s favourite Pub Feed? The director considers: “MVRDERBVRGER at the back of Crowbar in Sydney. I could live there.”

Here is the official video for “Pub Feed“